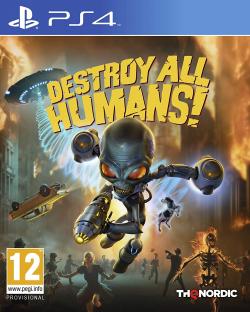 Back in 2005, the Playstation 2 was at its peak with five years of games under its belt and a plethora of eager developers hammering out titles for the ever-expanding library. It was a time of plenty; plenty of games to choose from, most of them good, a few of them awful, and a lot of them trying to compete with the grandeur and incredible level of design that Rockstar had poured into Grand Theft Auto: San Andreas just one year earlier. Open worlds with masses of NPCs and heaps to see and do were where the bar had been raised to, and in all honesty, it was a tough act to follow. Along came a then-seven year-old company called Pandemic Studios who saw fit to throw a spanner into the formula of "ultra-realistic open worlds" by spicing things up with an alien invasion-themed adventure where instead of saving the planet, you are effectively tasked with causing utter chaos and destroying everything in your path. Taking heavy influence from movies such as Mars Attacks, Destroy All Humans! is a light-hearted ‘50s action game centring around the UFO phenomenon, which aims to satirise the Cold War era in a way that is accessible to everyone, where you empathise with the otherworldly invaders. 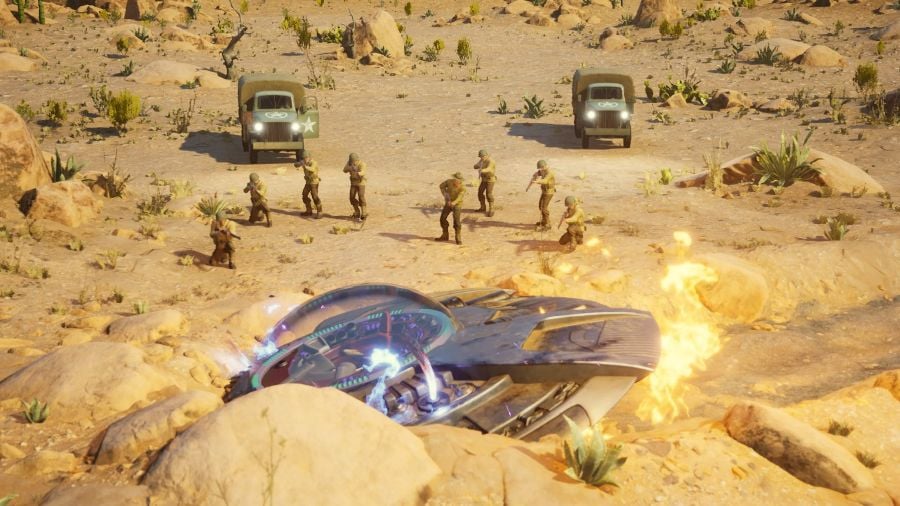 You play as Crypto, one of many alien clones with a bad attitude to match his bad intentions for the Earthlings below. Taking orders from your commander Pox, your mission is to explore the blue planet in an effort to prevent your predecessor's DNA from falling into human hands. Consisting of six locations and 18 missions, this 2020 remake also includes bonus "cut content" from the original 2005 game, while revitalising existing audio, and remodelling and re-animating virtually all of the cut scenes and in-game assets. Having played the original way-back-when, it was intuitive for me to draw comparisons between the new and the old and to be able to evaluate what had been altered and retouched.

The 2005 humour is there, in spades. Crypto is voiced by J. Grant Albrecht, giving a Tommy Lee/Jack Nicholson-like sociopathic inflexion to his sarcastic patriotism. Pox and Crypto play off of each other fantastically and their hatred for all things human shines through in their monologues and conversations. Pox is the stereotypical all-knowing leader, and Crypto is the gung-ho grunt who thinks he's the best thing since sliced bread, but in actuality, he's pretty dense. With a ‘60s attitude throughout, it’s like a time capsule of content to hear mid-2000s references mixed in with the in-game era settings. The human NPCs are voiced with some cheeky puns and quips from other games of the time, such as Duke Nukem's "kick ass and chew bubblegum" line. It's great that they preserved the audio, but perhaps they could have updated just a few of the lines, or given the NPCs more variety, as quite quickly you will notice a lot of repetition.

The first thing I noticed was how cluttered the controller scheme felt, thanks to an overwhelming assortment of buttons and commands to get accustomed to. Every button is unique in purpose, and one slight slip of the hand could leave you performing an anal probe in place of a more tame mind scan; you can imagine it being problematic early on. Perhaps in an attempt to simplify the controls of its PS2 predecessor, relying on a layered input system with the L button switching between layers, the game has one command mapped to one button. While to some extent I can understand the rationale, I can't help but find the layout of the commands flawed.

Using the D-pad, you have access to the distract, follow, and forget options, as well as Holobob, the ability to project an image of a targeted human around Crypto. On the face buttons, you can scan, dash, jump, and extract brains. To me, it would've made more sense to have Holobob and scan swapped. Though this change may be a subjective one, I struggle to hide how much it threw me off as I played. It's something you may get on with, but with this remake aiming to both attract a new audience and draw in its original crowd, I would have liked to see either remappable controls, or simply the option to go back to the more familiar, if not dated, control scheme of 2005. 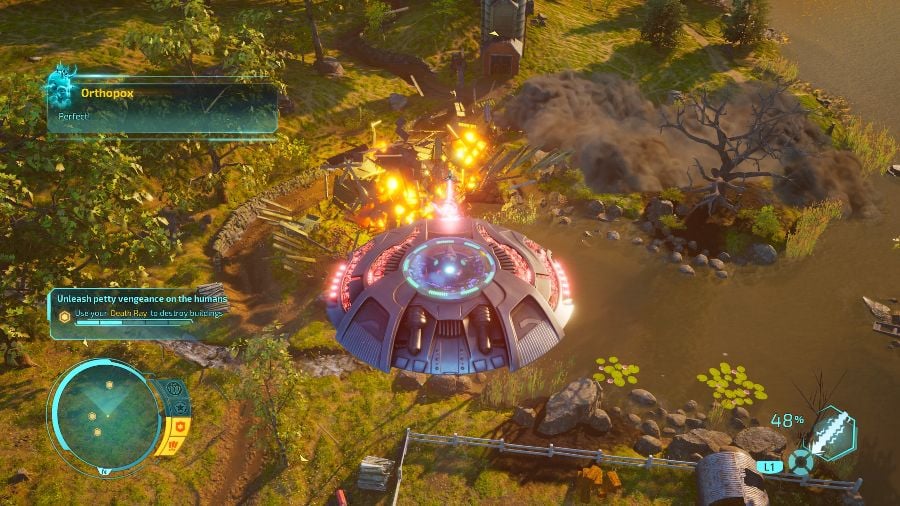 Tweaks and improvements to the menu layout and HUD make for a cleaner overall experience, leaving you scrolling through options less, and actually playing the game more. On the graphical side, this remake is a step up in all the usual ways. You have the finer details; from Crypto's metallic eyes and animated gills to the fresh coat of paint lavishly strewn across each surface of the environment. The streets don a level of detail that would have likely set your PS2 ablaze back in the day. These updates, nice though they may be, do shine a light on the areas that weren't so clearly touched up, the NPC AI standing out here. Though they now appear in numbers unimaginable 15 years ago, they're just as dumb as ever⁠—I understand it might not be feasible to completely change up how they function, but I couldn't help but want more from them all these years later. Beyond this though, everything is on show in an attempt to make use of the modern technology. More items on-screen, more explosive effects, better lighting on trees; it all adds up to make the game presentable to a modern playerbase. There are still small tweaks that could have been made, such as readjusting bounding boxes that are slightly too big for their meshes, but these things shouldn't ruin the overall experience for you.

Missions are snail-paced and repetitively chore-like. On paper, the idea of infiltrating a base with your arsenal of alien commands might sound appealing, but with only one real way to approach the task, it soon gets old. There's no freedom to attack each challenge as you'd like; there's ultimately one way to do it, and if you don't, you're stuck starting from the beginning. Each location has race, rampage, abduction, and armageddon challenges, a collect-athon of 50 probes to find, and various comedic and chaotic challenges to complete for Pox. If a mission requires you to hypnotise somebody and abduct them, it’s a matter of blending in and not getting caught. If you have to destroy something, it’s about climbing aboard your craft and disintegrating everything to dust. The mindless destruction is fun at first, but soon becomes monotonous.

You start out feebly underpowered, considering the storyline of knowing how inhabitants aggressively defend their planets and you are the 137th attempt, and it's up to you to harvest DNA to upgrade you and your ships abilities. Skills include psychokinesis, agility, weaponry and defence and you are free to purchase whatever you like as long as you have unlocked the power-up by completing a number of missions, and also have collected enough DNA to buy said power-up. It feels a bit like the abilities you really want are locked until you have almost finished everything and then you would be way too overpowered and no longer need them. I wish that the developers had made everything available from the start, but still walled them behind a DNA transaction, so you could really sink into customising yourself from the outset. I found that after a few missions I had plenty of DNA to spend and absolutely nothing to spend it on, which felt disappointing at first, but as more opened up, the balance then seems to slide the other way and the more you seem to have too little DNA to purchase the items that you unlock after each mission. 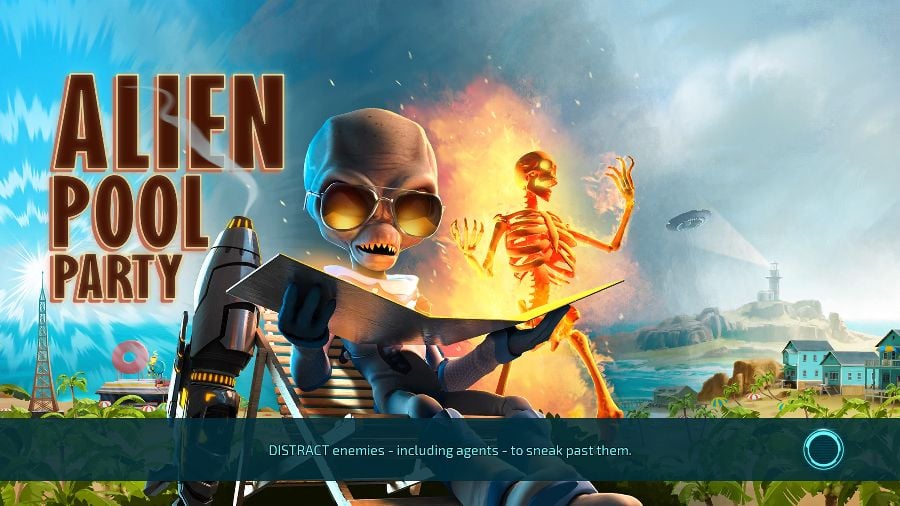 Frustratingly, the core gameplay has been retained rather than improved. Though some could argue that changing things doesn't make for a true remaster, this is touted as a remake rather than a remaster, which they could have used to artistically tweak gameplay to keep up with the decade and a half that has passed. My first bugbear is that when you're in your UFO, you are not free to simply park anywhere and go it on foot whenever you want. There are set places on the map that you can set down and get running and gunning, but these places are few and far between, and either off the beaten track and out of the way, which makes sense for the discerning little grey alien to inconspicuously land, or blatantly in the middle of town and the NPCs just accept it as the norm, not reacting to the fact that there is a flying saucer parked in the centre of town. If we had the ability to park up anywhere or even summon your UFO at will in the style of Knight Rider's K.I.T.T, it would lead to more modern and fluid gameplay in the vein of GTA: San Andreas with a vast array of vehicles you can commandeer to travel around quicker. Understandably DAH!‘s sandbox-style levels are nowhere near as vast as GTA's, but this slight oversight was probably a technical limitation for a PS2, and wouldn't be for a PS4 incarnation.

Another frustration is that of one little cut scene that unwaveringly plays at the beginning of every single mission. It's the scene where the UFO manoeuvres over the outer atmosphere of Earth and then zooms down to begin your mission. Sure you can skip it by holding Circle for a number of seconds, but why is it there? It doesn't serve to mask any loading times, it doesn't even seem to change based on progression to mix it up a bit, and it sure as heck doesn't build any tension, or hype you up. It's yet another small annoyance, that when stacked next to all the others, makes you wonder why the developers made half the decisions they did. 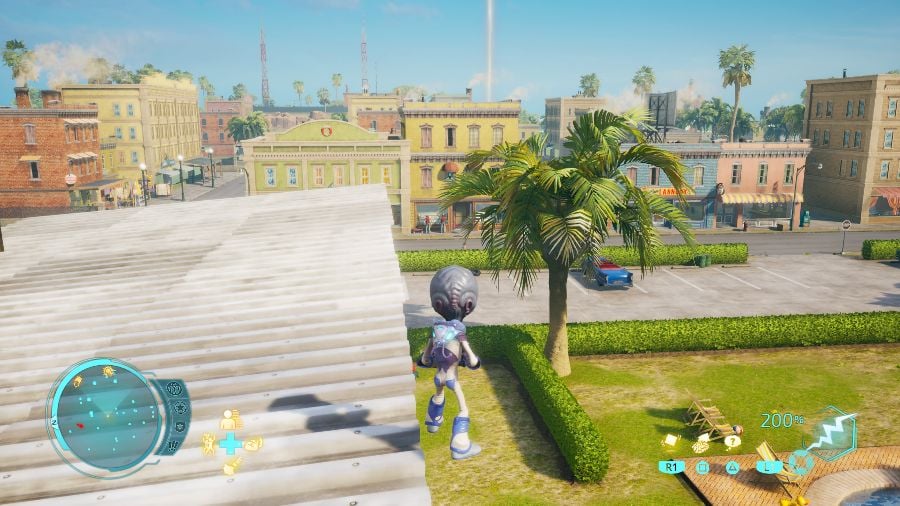 Destroy All Humans! Remake is simply a reskinned antiquated game that only the purest of fans will truly enjoy. While it's a novelty to have such games remade for 2020, something’s just not quite right with this one, and in comparison to games like Link's Awakening on Switch reinventing or polishing the aesthetics and mechanics entirely, while keeping its core storyline and mechanics solid, DAH! Remake takes an awkward engine, non-intuitive controls, dated ideas and douses it with a thick layer of polish and a bunch of unlockable artwork in the hopes that no one will properly look under the hood when kicking the tyres before purchase. It doesn't quite live up to the rose-tinted memories I had of it, and I don't fully understand why they didn't just make a fresh new game loosely based on the nostalgia of the original trilogy, because, to be honest: the second game was always just a tad better than the first. With the standard game retailing at a not too unreasonable £35 for the base game, £150 for the DNA collectors edition, going up to £350+ for the Crypto 137 edition, you would really have to be an obsessive mega-fan of Crypto to blow out that much money on the higher editions for a figurine and a backpack.