Minecraft, the ever growing, creative sandbox game has just today been updated to beta 1.4.
There are quite a few additions to the game including a new logo:

Could this be the reason as to why mine keeps crashing? 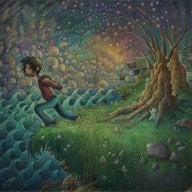 ^yh. though i have yet to find any, i feel so lonely

Found a wolf, didn't have any bones to tame it with. FML

Found a wolf, didn't have any bones to tame it with. FML
Click to expand...

how long did it take, i must admit i've been in the same area for ages but i still haven't found any.

Well I've been playing since the news about the Wolves came out and the only way I've found to stop it crashing and constantly slowing down is running it in Linux. Maybe try one of the windows OpenJDK builds for this game?

grrr the price better not have risen !
S

Yay, I'm going to uninstall JurassiCraft now.
Gotta get to my main world and build myself a garden for wolves.

But I think that's going to have to wait 'till tomorrow

I have been waiting for this. legit brown wool FTW.

It's not forced~ It only notifies you at startup~ ^^

creeper face in the "A"

Splych said:
grrr the price better not have risen !

I don't think so/hope not. He rose it after the change from Alpha to Beta last time iirc so hopefully he won't raise the price until the final release. Plus, if it has risen, it won't be by much as the final price will be €20 and ATM it is €15 so only by a few €s. I'll check on the inecraft site when, when it works again.

Let's see what the wolves have for us...

Only thing I like about this update is the brown wool tbh.
And won't be updating soon, have to wait till all the mods I use are updated.

More likely it's crashing because it's horribly coded and in Java.

More likely it's crashing because it's horribly coded and in Java.
Click to expand...

yes, and it's definately not my pc specs or w/e because it doesn't lag or anything first, just a straight black screen and stop responding, completely randomly.

Wabsta said:
And won't be updating soon, have to wait till all the mods I use are updated.
Click to expand...

That's the reason why I don't play with mods at the moment. It's too much of a hassle to have to update every mod you play with each time there's an update.

But don't fret- the mod API is on its way.

It's not forced~ It only notifies you at startup~ ^^
Click to expand...

i mean i got a prog which forces update, otherwise i wouldn't be able too -.-

haven't found any woofs so far, but i dunno if it's because of the update.....but i found strangely lot of coal...LOTS in one place

tempBOT: TheNintendoEnthusiast has left the room. 9 minutes ago
Chat 2