You can very well place all your ps3 games in .iso format and they will work (install the dlc and game updates to the internal harddrive)................the list below is only for the games that will not work otherwise...............I do understand, that, you can just convert the game dump into iso using the method below and play it, once again, this is about saving work time, if the game is in "pkg, rap" just install that instead. Also some games may not work without being rebuilt for "han" as a package, or as a package, with a firmware fix either released that way by someone or by yourself fixed with a patch. 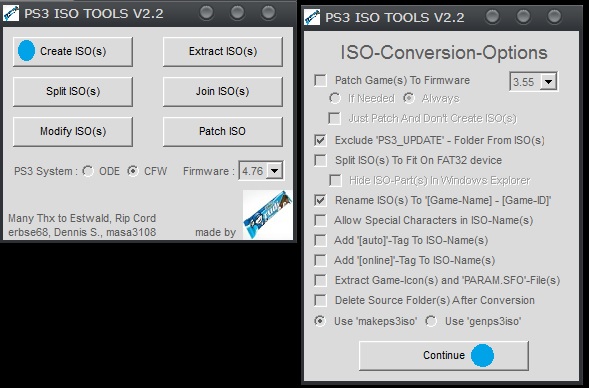 Select the folder with the "ps3_game" folder inside, it will build the "game.iso", you will have one large .iso file..............in your external ntsf harddrive (MBR boot table as opposed to GPT)..........create a folder called "PS3ISO", and put your iso files in there. (use those settings for all your games) (some games require a fix like attack on titan, there are releases for that, try not to modify the iso, unless it was that way from a patch or something)

Compatibility List - using "webman"
(enable HEN from the ICON, then option will show in your game list (webMAN), select "webMAN Games", then your "PLAYSTATION3" folder, select game it will launch the .iso file on the external drive, you can use the same drive on different PS3 units with the .iso on them, if you have friends........ like the guide says in the previous thread (select "webMAN Setup", then "Prepare NTSF Drives 1.17", your ps3 will do a soft reset, and it can now read the games on your external drive, you have to first install "prepNTFS 1.17" like the guide says..........don't enable hen after the soft reset just select your game from webman............in the future after you turn on your ps3 just select "enable hen" then select your game from webman)

(did a compatibility list for han, almost same results as official "cfw 2 ofw list"........try .iso instead of game fix or use game fix and build the package instead) (you don't need to unload any images, just select the next game you want to play from webman, after quitting the one you were playing with)

(in the webman Setup, scroll down using the bar on the right side, the "IDPS $ MEM Setup", just change that to "Plugin memory usage 320KB", save and power cycle your ps3)

(this is already stated in the tutorial package, in the link near the top) (install, PKG_Linker_V2.0_Installer, to pc, set up your pc and ps3 network addresses, make sure other devices on your router are not using those addresses..............add the .pkg files you want to install into that folder, add the "Package_List.pkg" file to your fat32 usb stick 16gb or smaller.............on the ps3 "enable hen from icon", install the package then restart the ps3............NEXT.............use the option from HAN TOOLBOX to install package from webserver, and install your packages)

(I'm Testing Now Weather or not you need to install .RAP files, with HEN, "PKG Linker" does,NOT, list .rap files, you have to turn that into a .pkg file using, PS3xploit-resigner-3.0.0.............then I'll have to test if you need to use the act/idps files for the hdd signed to it, with HEN and HFW firmware, most users report you don't have to resign then with "act/idps" from that hdd, the internet is not really clear about that)

(The Working Method is, ".pkg and .rap" file, into "PS3xploit-resigner-3.0.0", for the game, with your act/idps files from your internal harddrive, then two packages/.pkg files are created you install and works. DLC and Updates don't resign, unless in the rare case the dlc also has a rap file........................using HEN, (before was only han firmware update for original firmware)................the claim is that you don't need "rap" files or to "resign" game "pkg and rap" files into package files.................so some false information is floating around I'll just test this out (not using file managers here or FTP, not installing files in a non-standard way, this is regarding package files only))

(install order, game package, update package, dlc package. dlc fix package, license package or fix package...............if the game was a psn release, just use the update option from the ps3, if backup package, you build that with the update, not using install option)

Cars2 Unsigned PSN Package + .RAP file Package signed with act/idps from (internal hdd) "PS3xploit-Resigner" (difference is not signing the game package) = Worked (this is for NOPAYSTATION, or any ".pkg .rap", game install, you do save time, not having to sign the game package with HEN) (reactpsn doesn't work with hfw/hen, so you have to still resign the rap file)

(don't need to resign, a game back made to .pkg, or a backup .pkg, specifically made for "hen" as a release) (apparently just the .rap files for nopaystation/psn releases ".pkg and .rap", with .rap built into package)

DLC Test Install to Internal HDD for External HDD with .iso on it
(for same games listed as .iso previously)


That's It! ("COO" games timed trials to full games, like "marvel vs capcom 2", theres packages for them, you can even edit your backups)
Last edited by yeshuachrist, Nov 30, 2020
Reactions: susi91
A

(Those are all new installations on the harddrive, never installed anything past just 4.82 han firmware previously... ... ... ... the ntsf format and external harddrive using .iso games, reportedly fixes freezing issues)

Well, if the game has a ".pkg and .rap" file, it was a PSN release, with no physical release............just install the package file and rap file, using "PKG_Linker_V2.0_Installer". Rebuilding the game image for another installation method because you can is probably not a good idea, clearly that is true.

I don't see a need to transfer, loose game files to any partitions on the internal drive, either install ".pkg and .rap"...or use external drive with .iso, I use both methods.

Best thing to do is try again, wipe your internal harddrive, (google, you can try to delete the files from the previous installations, for, webman, multiman, since they have file browsers haven't tried that)...........you can go from "CFW" to "HFW", "HFW and HEN" seems to work fine for many users, versus, "CFW and HEN"................if your doing nothing fancy why not.

Seems to work no problems............i have 1 TB internal seagate drive, no need external that much size. (paragon partition manager, 8kb cluster size)...............I will test a few more games out. Same format as before, NTSF..................Can't report if using a larger drive size, and therefore larger cluster size, result in game reading problems or installing more then 100 or so .iso to a harddrive results in problem.)

1TB Harddrives, don't have the special ram buffers larger drive sizes have, that may be an issue, you may be good with 1TB external, again just exceeds my interests. (some users report 2TB external drives working on ps3, but, I have a 2TB external drive for the PC, and not all of those 2TB or greater drives are problem free, in being identified ............. so you take a risk, of not being able to use the drive, or being limited to how many games you can install to ti before the ps3 can't identify them.................500gb just for what i'm doing, since everything else works in packages psn format, no real need.


(some games like oblivion/skyrim/baja edge of control/tomb raider/fallout ........... benefit from SSD drive, because of the way assets are loaded, (google)), (the issue with "aliens colonial marines", gun textures loading slowly seems fixed...........on external ssd, versus, internal non-ssd hdd) (that reminds me, bayonetta, had similar issues)