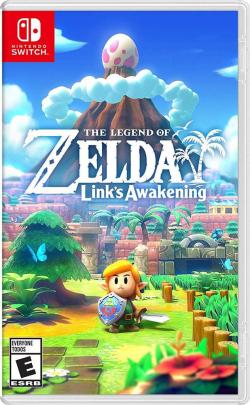 Everybody’s favorite pot breaker is back, this time in a revisited title brought to the Nintendo Switch! Is a revamped The Legend of Zelda: Link’s Awakening worth playing 26 years after its initial release on the Game Boy?

While to other gamers it might have been eclipsed by bigger and newer entries in the series, The Legend of Zelda: Link’s Awakening is quite a special title to me. It was actually the first game to introduce me to the Zelda series, and to the wonder of exploring dungeons, cutting grass, and breaking pots in random people’s houses. I recall taking turns playing it on my brother’s Game Boy Pocket back in the ‘90s and the game’s cartridge still survives with our saves! So of course, I was really curious to experience this remake of a once-forgotten Zelda game on a current-gen console. 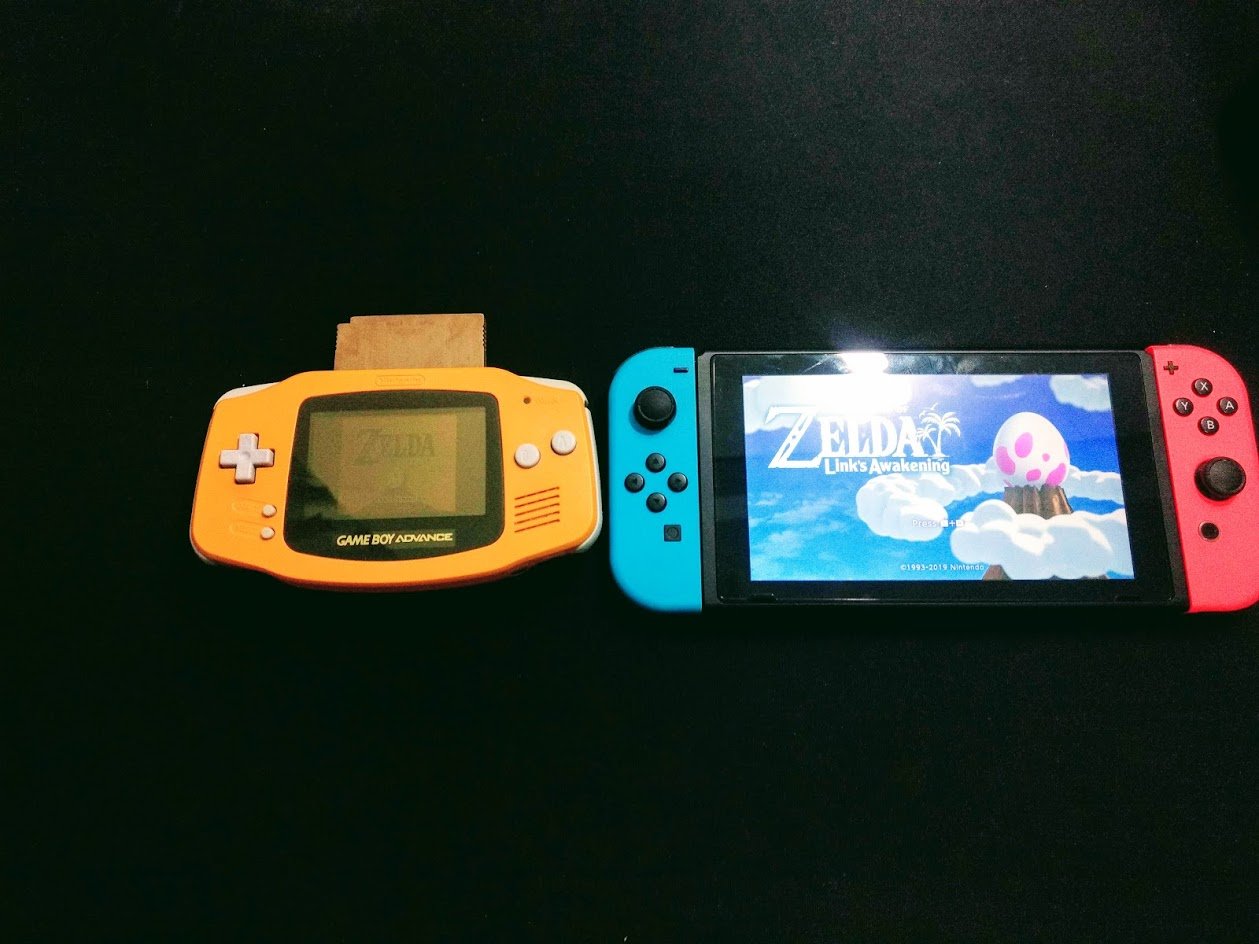 The game survives... but the Game Boy Pocket did not...

For those who haven’t played the Game Boy version, Link’s Awakening follows the story of Link as he... awakens on the peculiar Koholint Island following a shipwreck. As the eternal amnesiac that he is, Link has to find a way out of the island and the only way to do so, according to the helpful owl, is to wake up the Wind Fish. This can be achieved by finding eight instruments, each hidden in separate treacherous dungeons. And so begins the adventure for our hero clad in green as he sets out on this quest which will see him travel all around the island, befriending interesting characters from the kids in Mabe village to the all-knowing Old Man Ulria, to talking animals and explore eight puzzle-filled dungeons each with a unique boss to defeat. 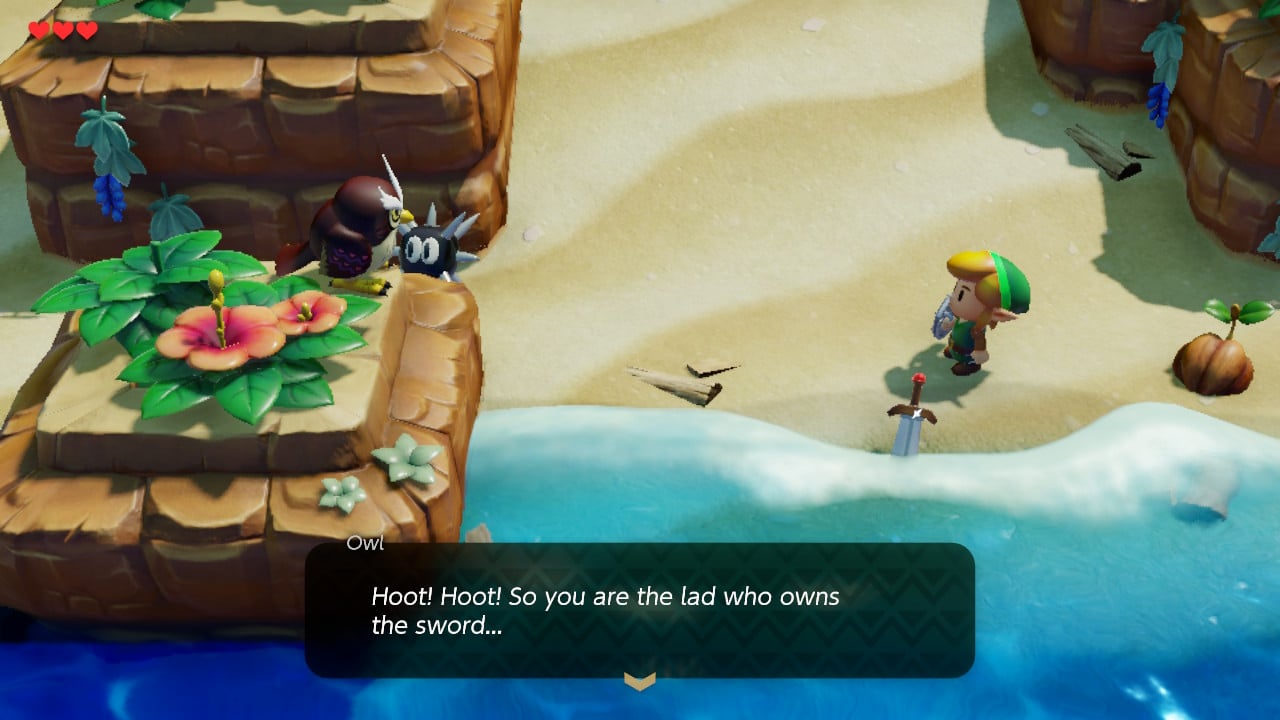 Of course to aid him in this endeavor, Link will have at his disposal a plethora of weapons to fight off the innumerable creatures and dungeon bosses that he will come across. From the boomerang to bows and arrows to the hookshot and more, Link’s Awakening packs classic Zelda weapons, even if some will require unconventional yet interesting ways to acquire. Most notably is the boomerang which can only be obtained at the end of a series of items trading with the island’s inhabitants and involves a mermaid scale, a Yoshi doll, a catfish love letter (!), among many other bonkers items which gives Link’s Awakening its signature lighthearted and friendly feel. 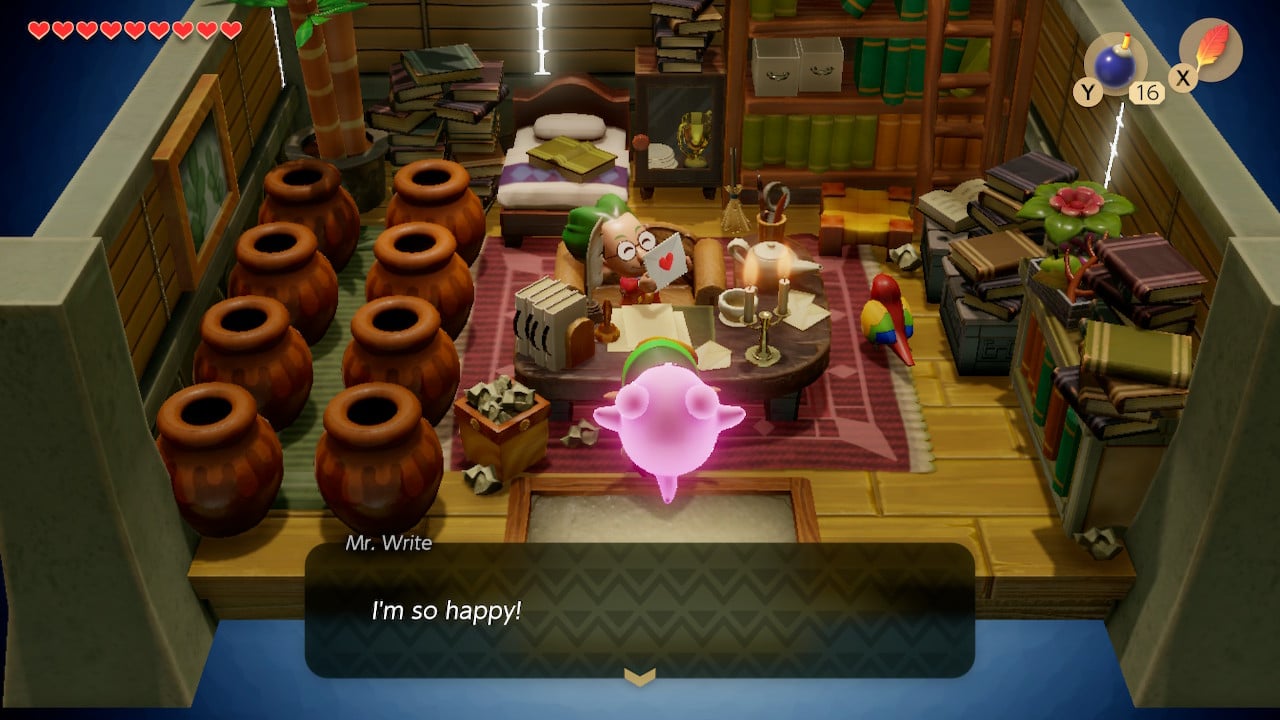 This has been accentuated by a new art style to adorn a Zelda series. While the toy-like visuals might be divisive, I personally didn't mind it and actually found it to be pretty cute and vibrant, and even found it to be adequate for this title. Every scene and sprite has been re-imagined and remade in 3D from a top-down perspective à la classic Zelda titles, but it has been faithfully remade. If you’ve played the original game, you will recognize every scene and character but just in color, 3D, and HD. We’ve had Toon Link and Realistic Link before, so I’m sure we can get used to Cute Link!

What I did mind with this version’s visuals was the blur around the edges of most scenes throughout the game. While it might have been done to focus the player's attention to the center of the screen or to prevent drops in frame rates in handheld mode, the blur is quite noticeable and doesn't do justice to the bright and attractive landscape adorning the game. 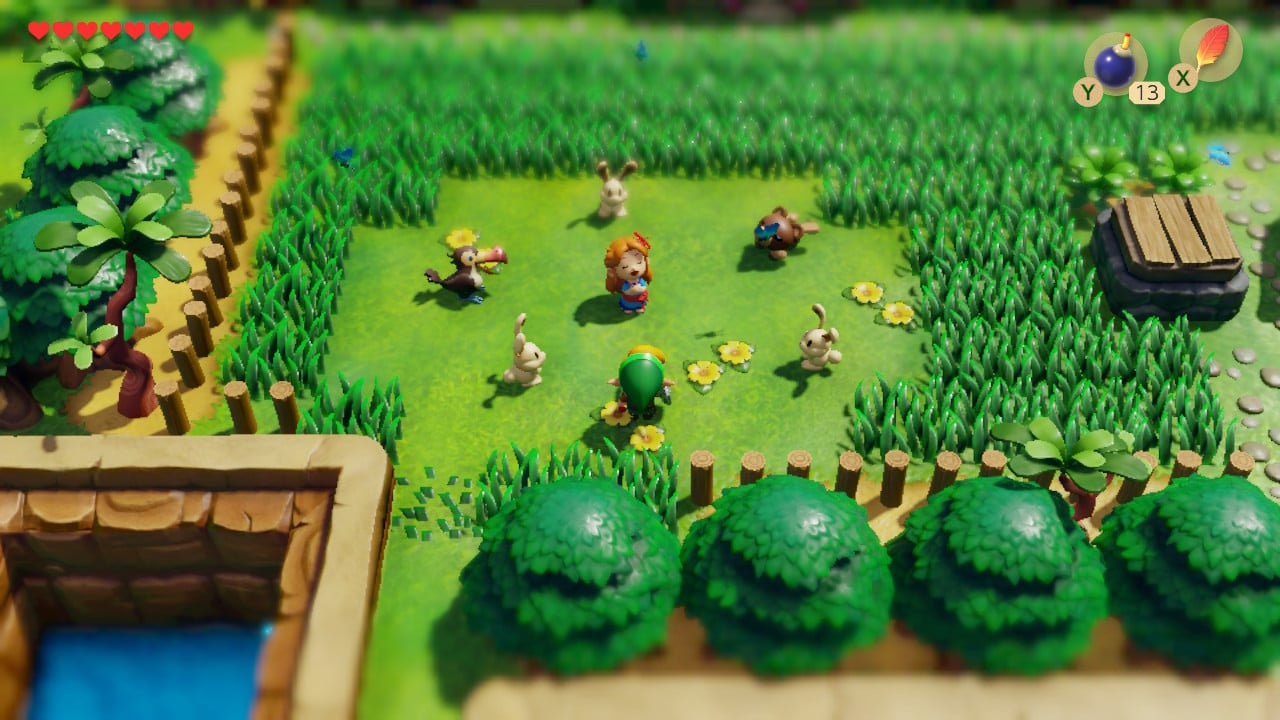 Nevertheless the Switch remake is true to its source and will evoke many nostalgic memories among those who played the original version. Getting the ability to jump after obtaining Roc’s Feather or rescuing Madam MeowMeow’s BowWow or the Mario-themed areas are some of the many, many events that brought me back to decades before when I first accomplished the same feats on a black and white screen. Even the music, which has been remade, follows the original one's tune. In fact, this game is an almost exact replica of the original with the exception of a few additions, which we'll get into later, that don't alter the game’s progression or plot. 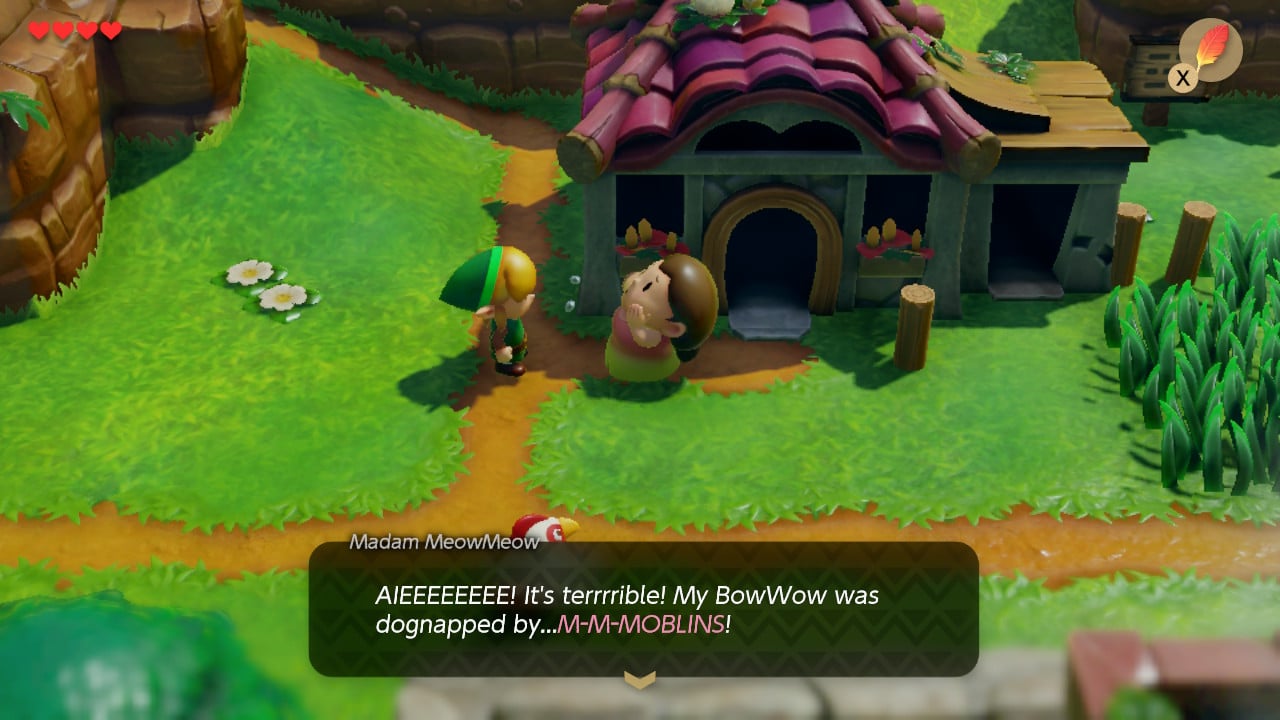 However, new memories will also be forged for new and returning players alike. Despite being an old title, the remake has been adapted to make it play like a current-gen title. On top of its audiovisual overhaul, players will find new and welcome features like the auto-save and more accessible fast travels. Of note, the Nintendo Switch’s full-fledged controller does not restrict the gameplay as with the Game Boy’s limited A and B buttons. For example, you will always have the shield at the ready with R/ZR and won’t have to map it to A/B. These buttons can be assigned to other items that are more adapted to the current situation like the hookshot or the magic powder. You will also find some items like the Power Bracelet (to lift heavy objects) whose powers are automatically conferred to Link once obtained. In this way, the Switch version makes for a more seamless experience.

A totally new feature in the Switch version is the addition of the Chamber Dungeons in Dampé’s Shack. Here, Dampé will allow you to create your very own dungeons using rooms from those dungeons you’ve already completed, and rearrange them to your liking. While it sounds interesting in theory, in practice it’s mostly a time-consuming affair which will yield simplistic custom dungeons where you’ll come across the same rooms on loop.

Unfortunately there are some performance issues in the form of drops in framerate when transitioning to another area, mostly noticeable in handheld mode. Nevertheless, these were not game-breaking and the game, with its vibrant and peculiar inhabitants, colorful areas and unique plot, make up for these issues.

Link’s Awakening is a classic Zelda title far from Breath of the Wild’s open-world level of ambition, but reminiscent of the older titles. There’s still a sequential flow of tackling dungeons and obtaining items that will allow you to progress (for example, you can’t initially enter the Mysterious Woods because of a bush blocking your way and you’ll first have to find your sword to progress). The puzzles and obstacles you will encounter aren’t particularly challenging but satisfying nonetheless once completed. These aspects might entice new and/or younger audiences unfamiliar or intimidated by the scope of other Zelda titles. More seasoned players might be looking for more challenge but it’s still a title worth revisiting, especially if it’s been decades since you played it and barely remember the ending. Link's Awakening also serves as a reminder as to what makes Zelda games enjoyable; it's not the open-world or countless of side quests, but the universe, the characters, the plot, and also the fluid gameplay. 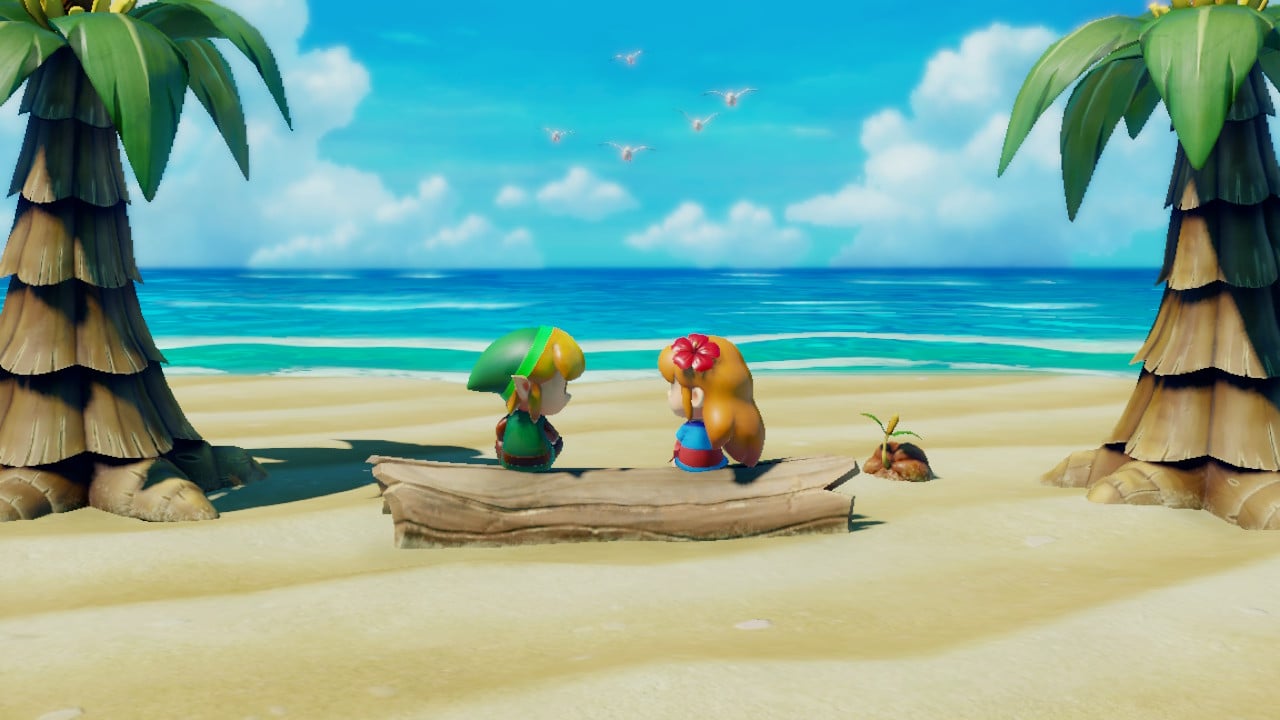