Log in Register
Menu
Install the app
You are using an out of date browser. It may not display this or other websites correctly.
You should upgrade or use an alternative browser.
User Review Nintendo 3DS Updated 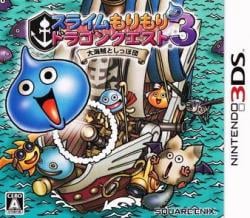 Rocket Slime...but with ships?! Who ever heard of shooting a Slime out of a cannon?!
Slime Mori Mori 3 is an action-adventure game with a gooey twist.

​
Since Dragon Quest is around 30 years old, it only makes sense that the titular slime would've had his time in the spotlight. It does, and it was glorious.


Table of Slimaments
The Slime Begins
The Slimening
Full Slime Ahead
Squishbuckling
Throwing Swords
Other Slimenia News
Launch Trailer​
​
The Slime Begins
Imagine waking up on an unknown island, not knowing how you got there, or why you're there. Right outside your immediate view you can see monsters roaming, watching your every move. Now, realize you're a slime, the island is your house, and the monsters are platypus love-children. Oh, and you have a warship.

The fear-inspiring warship!
​
As you start your adventure, you'll be greeted by the titular team of the game before this, Rocket Slime. If all you oldies out there can't remember it in your old age, your best (only?) friend, Hooly, tried to straight-up destroy you in a 1v1 battle. Your friend Swotsy reprises his role as the coward, and, instead of helping you fight, he helps you craft increasingly powerful (OP?) weaponry to fire out of your cannon. (If you ask me, I think the sword would be more useful if you used it as a sword, not a cannonball...) 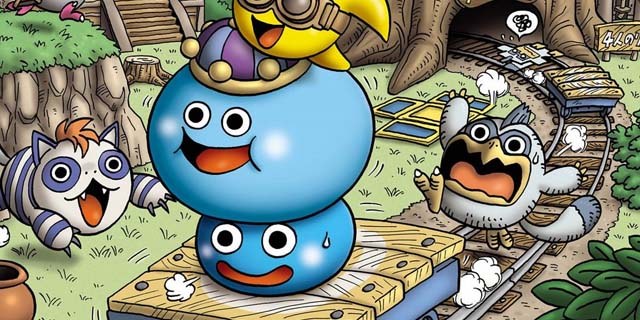 ​
The Slimening
As the game begins, we find ourselves in our blissful (too quiet?) kingdom. We soon discover that the castle is under attack (?!). At slime-speed, we rush to the castle only to witness the "Rainbow Orbs" (creative name, I know) being scattered. Within these orbs lies the power to animate landmarks across the world! In a clear, rational decision, it is decided to send you, and your friends (?), to retrieve them. 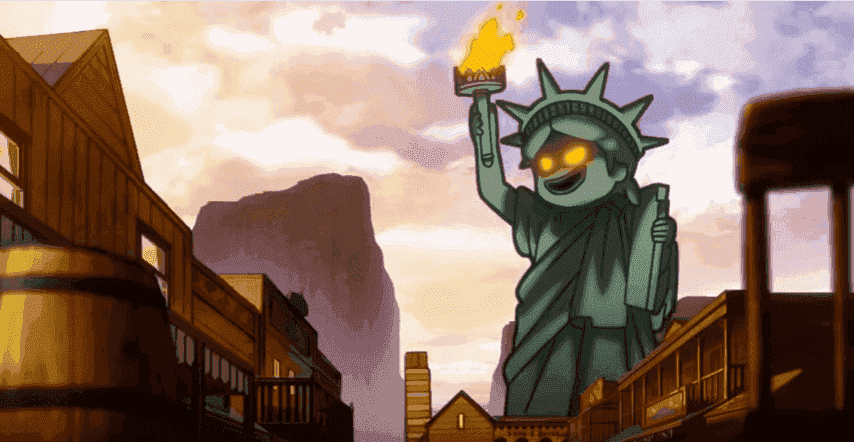 ...on the plus side, taking out these baddies will net you some sweet (gooey) summons. 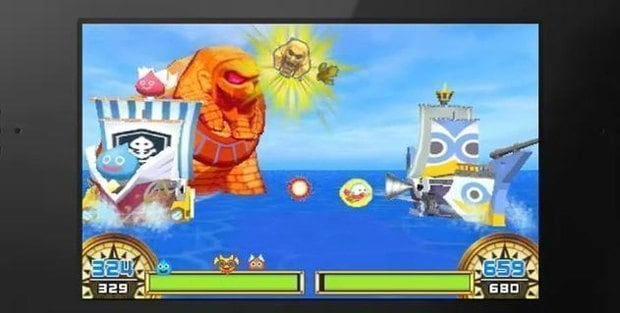 ​
Full Slime Ahead
Our slimey protagonist's adventure follows a unique way of dealing with enemies. Instead of, y'know, normally attacking, we instead stretch out our internal organs and propel our body into the enemy, (this is called the Elasto Blast.) But besides THAT, it seems pretty standard. We go to a new place, solve their problems, get the girl orb, and leave.

​
In levels, our protagonist is tasked with getting to the end of the level to beat the boss, if there is one. Now, if you're thinking that you can just speedrun this area and get done within 5 minutes, you'd be right (...) BUT! Missing out on the items and monster in that area will hinder you more than help. When Elasto blasting something, it will fly into the air. If you can [catch] it, it will appear on your head. Our slime is only so strong, and can hold up to three, total, enemies and items upon his head. Pressing 'B' will launch whatever is on his head, and pressing 'R' will switch the order of what's on his head. Throwing objects onto carts, found around the level, will take them back to town. 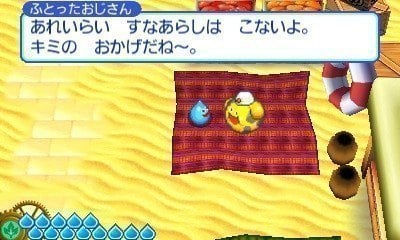 ​
Collecting items in a level will let you plop it in your ship. Now you may be thinking, "Does this mean I have to grind to get good items?" ...and the answer is yes, if you want to be competitive. Getting raw materials from levels won't suffice on its own in the later levels, since doing 5 damage with a piece of ammunition won't cut it when their health is in the thousands. There is a solution, and his (its?) name is Swotsy!

​
Swotsy will set up a crafting station for you from the get-go, and as you collect materials, he will craft them into better (OP?) weaponry. On the flip-side, beating bosses will reward you with Summons. Summons are the decapitated head of your vanquished enemy, and throwing out of your cannon will Summon their departed spirit to fight for you. (Seems pretty messed up out loud.) 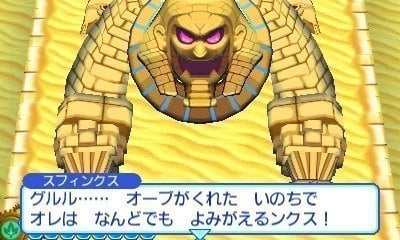 ​
Squishbuckling
The defining attribute of this game, that separates it from its predecessors, is the nautical warfare. The gist of it is to whittle down the HP of the opponent's equally(?) deadly ship and Destroy the Core! Destroy the core!
​
"How do you do this?" I can('t) hear all your silent voices saying. Well, you take your warship, and you throw flowers and Platypunks at them. Situation Normal​
Seems pretty s(ub)lime, right? Well, IT GETS BETTER. In-game, in those levels that I described earlier, you get stuff. "What kind of stuff?" All the stuff. Pom-poms, flowers, rocks, catnip (...) whatever seems like it'd be strong enough to destroy a warship. Mix and match ammunition and team members between battles to MAXIMIZE YOUR WARSHIP'S (I thought this was a kid's game) POWER! 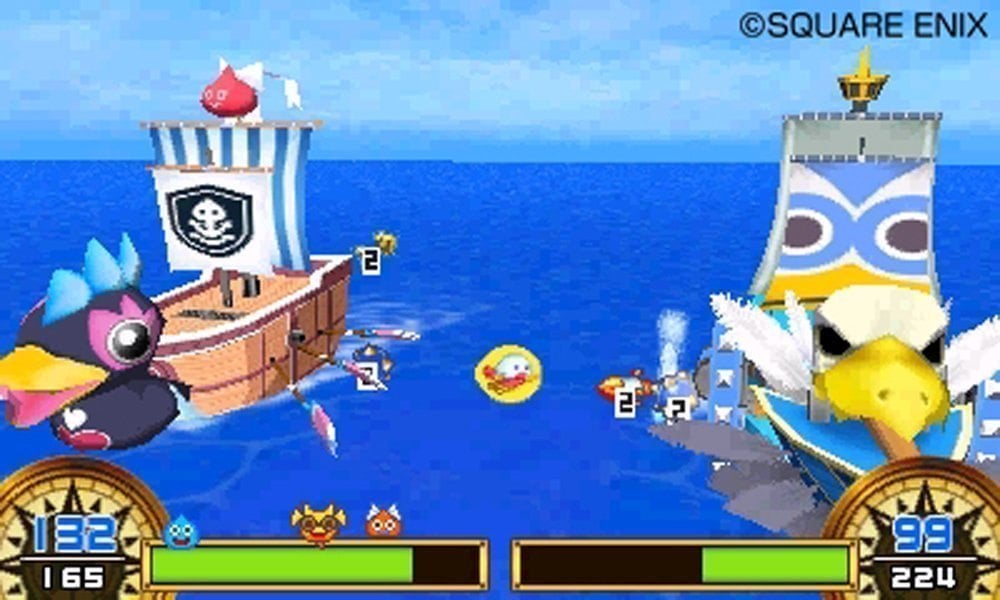 The top screen during typical slime-play​
Items that are put into the ship's ammunition supply will appear randomly throughout the ship from the chutes. The location of the chutes is different depending on how the ship's hull is customized. Throwing ammo into the upper or lower cannon will fire that ammo (after a short delay) at the opponents ship with the respective arc. A rope will appear between the two ships after one, or both, ships' HP becomes zero. Navigate through the broken enemy ship and rip its heart out with your super-special-ultra-awesome attack! 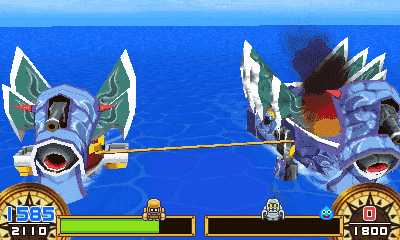 ​
Crew-mates, which are unlocked a fair bit into the main story, are necessary to cheese through any enemy with ease. Outside of battle, your crew does nothing. IN battle, however, your selected crew members will assist you on-deck with attacking/defending-from the enemy. Each crew member, with a few exceptions, have TWO abilities. (These can be switched during a battle by pressing start) each crew member has certain, specific abilities that may, or may not, be exclusive to them. For example, Hooly can heal or (clearly the better option) fling himself at the enemy in a mad cry of desperation, (okay, maybe I exaggerated a bit.) Crew-mates come in THREE distinct varieties. Those started out with, those who are unlocked by quests, and those who are unlocked by kidnapping as many of them as possible. Now, one of these may scare you off, but, I swear, Swotsy doesn't need to be unlocked. 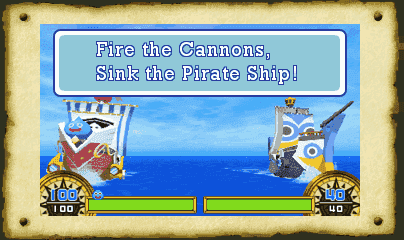 Pretty self-explanatory​
The first of the crew-mates (the already unlocked) are your big three. Hooly, Bo, and (sigh) Swotsy. This is an 'OK' team for the first hour, maybe. It will become immediately apparent that none of these crew members work together on a real win condition, and you'll need to recruit stronger, more specialized teammates to take on bigger threats. To get crew members that fall into the second or third category, talk to everyone and steal everything. Including living beings. (Just...take it.)

My ship build, clearly, is the pointiest things I can find. Rocks and swords. Oh, and I like to work with the large (heavy?) crew-mates. They do more. Y'know the saying "the more the merrier" or something...it works, trust me. 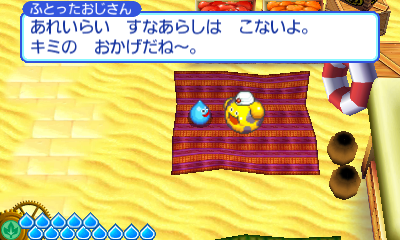 He'd make a fiiine crew mate​
"Swords?" Yes, swords. In ancient times, at the mantle of every feared samurai was their sword. A mighty weapon, the wielder's might amplified by every awe-inspiring swipe. Rocket does the same thing. He takes his sword, then he throws it at the enemy. Now I know you may be thinking, "WHY would you THROW A SWORD?! Use the sword AS A SWORD!" I have two words:


Throwing Swords
~ There's nothing better than sitting back and firing your cannons to the sounds of birds chirping ~ So peaceful ~
As you may have heard, swords are (by far) the best ammunition a slime can handle. Too bad you don't get those until the end. Guess we'll have to make do with these flowers and chests...until we can craft. 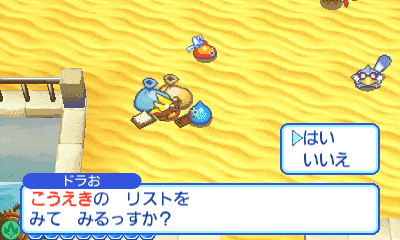 (Swotsy...useful?!)​
Crafting is the end-all be-all of this game. Without it, beating the final boss with nothing but catnip and rocks seems pretty impossible. Crafting allows slimes to take items that have been collected during levels and combine them to create new weapons. Taking a log and strapping a piece of catnip onto it (revolutionary!) makes a wooden arrow, (for some reason.) Recipes are unlocked by completing various tasks in-game, and they'll mostly be unlocked automatically.

A catnip a day keeps the...uh...cats(?) away! Yeah, that's it...​
Crafting new ammo isn't only a necessity to remain relevant in a sea of dastardly pirates, it also lets slimes experiment with new fighting styles. For example, an Iron Shield item blocks 3 hits, moves slowly, and does very little damage. While it seems to do very little on its own, it allows many, slower, pieces of ammo to survive behind its barricade. There are many, MANY different types and statistics for every piece of ammo, it's up to the player to experiment to find which abilities aren't in the item's description.

​
Other Slimenia News
Currently, an English patch of this game is being worked on here. (And maybe a future balance patch modification.)

Sadly, the online multiplayer for this game was taken down a long while ago. While the online shop remains, the servers for battling are no longer up.

The game does have Streetpass. It's pretty lackluster, and is more of an add-on feature than anything else.

Local multiplayer exists in the forms of competitive squishbuckling and cooperative AI battles.

What I Liked ...
What I Didn't Like ...
9
Gameplay
Great controls and addictive game-play.
6
Presentation
The story, while pretty standard, has a lot of character and cute moments to spice up level elements.
10
Lasting Appeal
This game, and its predecessors, I often replay for the fun and exciting content. I couldn't get enough of this.
9
out of 10

I feel like this game had a lot of effort put into it, and it clearly shows.
Reactions: Zense, Prans and Neobeo
Share:
Facebook Twitter Reddit Pinterest Tumblr WhatsApp Email Share Link
Wow... sounds pretty wierd lol... so youre a slime throwing swords at enemies, and have a warship shooting catnips and rocks at other ships? Gonna play it when english patch will come out...

natanelho said:
Wow... sounds pretty wierd lol... so youre a slime throwing swords at enemies, and have a warship shooting catnips and rocks at other ships? Gonna play it when english patch will come out...
Click to expand...

Yeah, pretty much. It's your typical "weird Japanese game" in that sense.
thank you so much for the review, i will defintely give this a good read today.
i so much want to get into this game, but the sad thing is that i have no idea how the game mechanism works even though it looks so simpllistic.

i have to try to get into it as the game looks extremely fun and i am a huge Doooragoon Quwest fan , and slimes are goooreat.

leonmagnus99 said:
thank you so much for the review, i will defintely give this a good read today.
i so much want to get into this game, but the sad thing is that i have no idea how the game mechanism works even though it looks so simpllistic.

i have to try to get into it as the game looks extremely fun and i am a huge Doooragoon Quwest fan , and slimes are goooreat.
Click to expand...

Going off of the game mechanics, this game has a lot of small movement tricks and probable glitches that the game won't explicitly tell you. I feel like the game wants the player to discover what items do, similar to the second game - RSDS.
Reactions: leonmagnus99
is there a full translation?

mike42 said:
is there a full translation?
Click to expand...