Huge SuperCard fan.
Have you ever wondered what it would look like if the Supercard DSTWO and GW had a baby? Well as long as the DSTWO is the pedigree, the DSTWO+ is exactly what the baby cart would look like.

The DSTWO+ is SuperCard’s new 3DS compatible cart. While other carts are locked into the 3DS realm of gaming only, the DSTWO+ promises to allow you to launch 3DS roms as well as enjoy everything you loved about the original DSTWO, all in one cart!

Basically non-existant. The cart came in a USPS envelope just like the pictures below, straight from 3DSGamerworld.com.

The cart itself looks good, with a shiny sticker and gray plastic like the old DStwo. The components are visible through the front of the cart, making it look a little bit lumpy. If you had a DSTWO for you DS, GBAtemp edition or otherwise, you are familiar with what I am pointing out. Curiously, there is no screw holding the cart together, just simple interlocking nubs placed around the cart. I was able to almost pry the whole cart apart with just my fingernail. One corner was especially stubborn, so I gave up trying after a while. The Micro SD slot is spring loaded, take that however you want. I have had my fair share of both spring loaded and not spring loaded slots, and prefer the non. On three occasions of reviewing this product, my microSD cart has jammed up under the inside edge of the cart, immediately after inserting it. This double depresses the spring, basically putting the cart into catapult mode. Upon trying to remove the SD card, I am no longer able to remove the card using the push and pop method assisted by the spring. Only when I gently squeeze the cart together does the slot eject the cart across the room.

Those little components you can see through the sticker haven’t really moved location since the old DS days. Compared to the DSTWO, the Plus has 2 times the processing power, 4 times the flash, and 32 MB of ram. The Plus will also support 3DS revisions through upgradeable firmware.

Setting up the DSTWO+ is simple enough, even without instructions included. Head on over to the Supercard Downloads page and grab the two downloads at the page. In the root of your DSTWO+’s Micro SD card, drag over the _dstwoplug folder containing the 3 GW_SIMULATOR files.

All the GW_SIMULATOR plug_in does is install the DS profile exploit. I did not know this until I searched around the internet. Again, an instructional page or setup sheet would have been a great addition to any sort of packaging.

To install the DS profile exploit, simply set up as above and launch you 3DS into the DSTWO plug-in menu. Select the GW_SIMULATOR plug_in and follow the on-screen prompts. ***NOTE: The installer expects and requires your 3DS to sysNAND to be within the hackable range: 4.2 to 4.5*** After you install the exploit, you can boot your 3DS into emuNAND at any time using the same steps you would with a GW card: In sysNAND, select the settings menu. Open up Profile settings and select DS Profile. Your 3DS should freak out, show the GW logo and load up emuNAND. Pressing “Select” will bring up the 3DS multi-rom menu.

The DSTWO setup is just as easy. Open the other folder you downloaded and drop the remaining folder (“_dstwo”) into the root of you DSTWO+. You should now be able to boot your 3DS and find you familiar “Alex Rider Stormbreaker” cart and run your plug-ins like the good old days. Any other plug-ins you wish to add, dump the 3 plug-in files into the _dstwoplug folder and run them like regular.

3DS GW Simulator Plug-in (The “+” part of this review)

Everything else: DS plug-ins (The “DSTWO” part of this review)

All the rest of the DSTWO’s abilities are here in tact, if you would rather have one or both of the extra features. One, all of your DS needs are also taken care of by this cart. This eliminates the need for a second flashcart, like using your old DSTWO, R4s, or anything else that still works on a 3DS. Secondly, this is essentially a hackless GBA, SNES, and any other DSTWO compatible plugin solution that you would want to use. That’s right, any old emulator or homebrew that you used to use on your old DSTWO can be used here in DS mode.

Right now, the CATSFC and TempGBA do not seem to be much faster, if at all, even with the new hardware. Only time and developement will tell if the new hardware makes the emulators a viable alternative to the CFW versions. The biggest bummer about all of this is not being able to use the whole top screen of the 3DS. Your games are letterboxed because you are still emulating in DS mode. I can say that the DS game launcher, cheat windows, and in game DSTWO menus feel a bit snappier thanks to the extra hardware. I have not had a chance to thoroughly test many games, but I would assume this would lead to less game freezing while activation cheats or modifying a save state.

Here’s a fun little bonus for you. If you have a DS phat, lite, i, or iXL, you can use your DSTWO+ just like you would use any other DS flashcart. You obviously can’t launch 3DS roms on a DS. Be warned, I did have a little trouble getting the cart back out of the DS lite. The extra on board hardware made the 4in1 just a little too snug and required a little bit of prying to get back out again.

Compatibility - Because the two emulators being touted here are these two, I will only be doing a quick PASS/FAIL test with these emulators. Other emulators, jEnesis, LameBoy, NesDS, all work and passed everything I threw at them. If anyone wants a specific rom tested for any DSTWO+ emulator, let me know.

Megaman Zero 3 - FAIL while technically playable, MMZ 3 suffers from a lot of graphical and audio glitches

Castlevania: Circle of the Moon - PASS

Legend of Zelda: Link to the Past - PASS

The DSTWO+ is exactly what it says it is. Its not the next big 3DS flashcart, and doesn’t come with tons of new 3DS features. It simply opens the door to playing all of your favorites from the DS era as well as being able to launch 3DS games, all from one cart.

However, I do feel like the DSTWO+ is a little too late to be effective in the late 2015 3DS flashcart arena. Most users have a decent grasp on the budding 3DS scene and coders are getting better too. Custom Firmware is the biggest enemy of a cart like the DSTWO+. Emulators available for the DSTWO run in DS mode, and even right now with the advanced hardware, still only run fractionally better than they did on the DSTWO. CATSFC and TempGBA will need developers to work with the new hardware for the emulators to be viable against their CFW 3DS versions. However, if you are like me and don’t really want to put all the time and effort into installing CFW, this cart is a great all in one solution. No need to switch carts to install the DS exploit, play DS games, emulators, and 3DS game. I suggest this cart to anyone who wants a solid all in one, set it and forget it kind of experience. 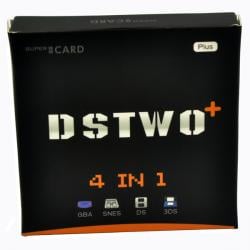