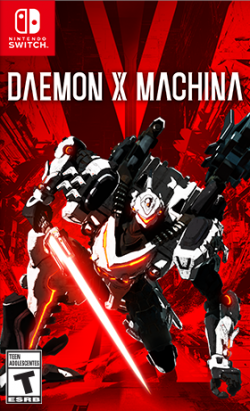 New to boast the Nintendo Switch exclusivity label is the mech shooter game 'Daemon X Machina'. Coming from Kenichiro Tsukuda of the 'Armored Core' series fame, with mech designs by Shoji Kawamori ('Super Dimensional Fortress Macross'), this brand-new title sure promises a lot with such names tied to it. However, does it deliver? Let’s find out!

So we've all seen it from the trailers: mecha battles in a derelict world; but what is Daemon X Machina?

Actually, the above description is more or less it for the game. In Daemon X Machina’s future, some AIs went rogue following a cryptic phenomenon involving the moon’s fall and now they are hell-bent on destroying humanity. You take control of a rookie mecha pilot called an Outer who is basically a mercenary, taking contracts from the highest offers to curb evil AI-controlled robots called Immortals. Cashing out on humanity's survival, isn't this the ideal job?

Your fully customizable rookie avatar is, of course, a prodigy who quickly gets noticed by veterans as your rank increases by completing missions. And of course, every unusual event and boss fights happen whenever you are out on a mission, as if you are an events magnet. 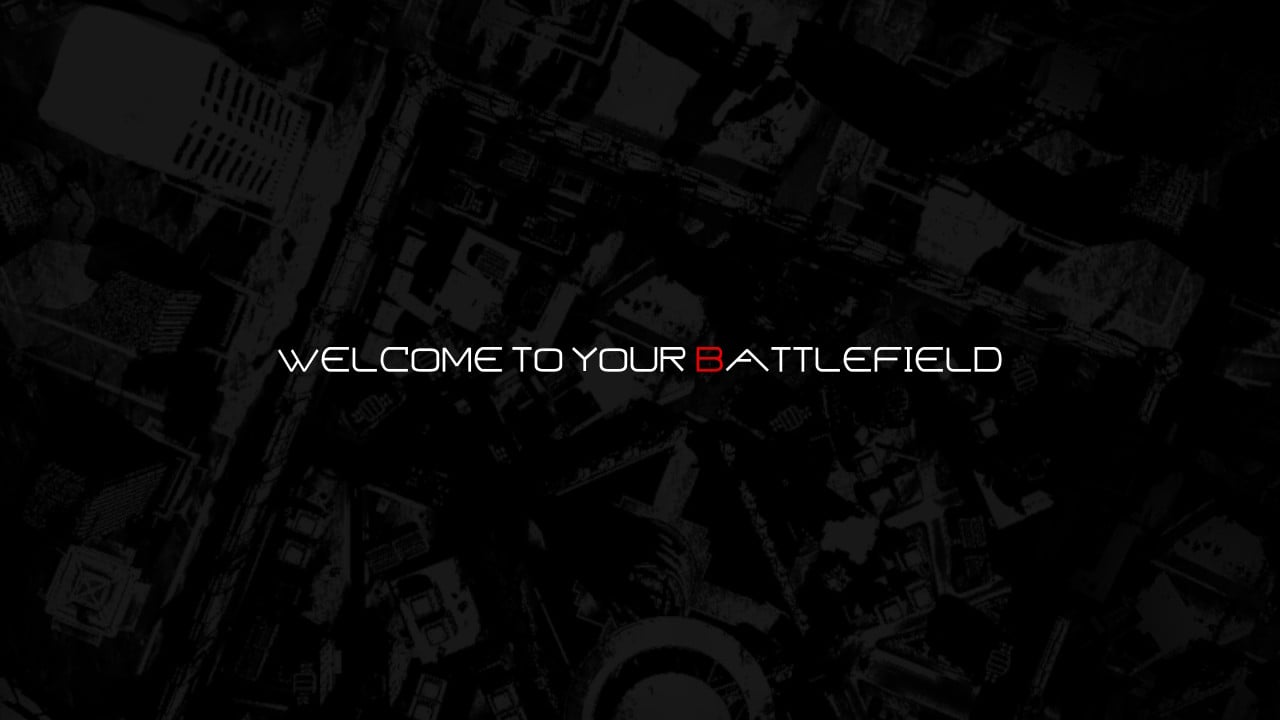 Unfortunately, narrative-wise Daemon X Machina lacks in such subtlety and the plot progression feels repetitive and predictable more often than it should. The story does include some twists but feels underwhelming and poorly executed overall.

For one, at the beginning you often come across several unintroduced characters from various mercenary bands. I was often left scratching my head, trying to recall who’s who but I realized soon enough that all of them weren’t formally introduced by the game.

Then there’s a break in continuity between cutscenes, dialogues and gameplay when the characters switch from talking in person to chatting on some future messenger app, and the game just hops you to the mission where characters will communicate via an intercom. While the latter makes sense in context, I don’t really see the point of having a cutscene and then move to text-based chats if all of the same characters were conversing a second ago.

Moreover, during missions, some crucial plot points are elaborated upon via the intercom but these can easily be missed. This is especially the case while you're trying to shoot down a colossal Immortal but someone fires up the communications channel for a chat. In such situations, it can be kinda hard to concentrate on what's important: focusing on plot development or staying alive. Juggling both takes some getting used to and you will eventually get a grasp of it but it is undoubtedly one of the least intuitive ways to progress a plot that I've ever seen.

It's really after about 2.5 hours in that the story starts to kick in, as you get deeper into the politics of the world of Daemon X Machina, with allies facing each other and getting distracted from the actual threat. But even then the plot gets repetitive, without really redeeming itself.

It's a shame that the plot execution is not as polished as it could have been and really makes a disservice to the more elaborate combat system. 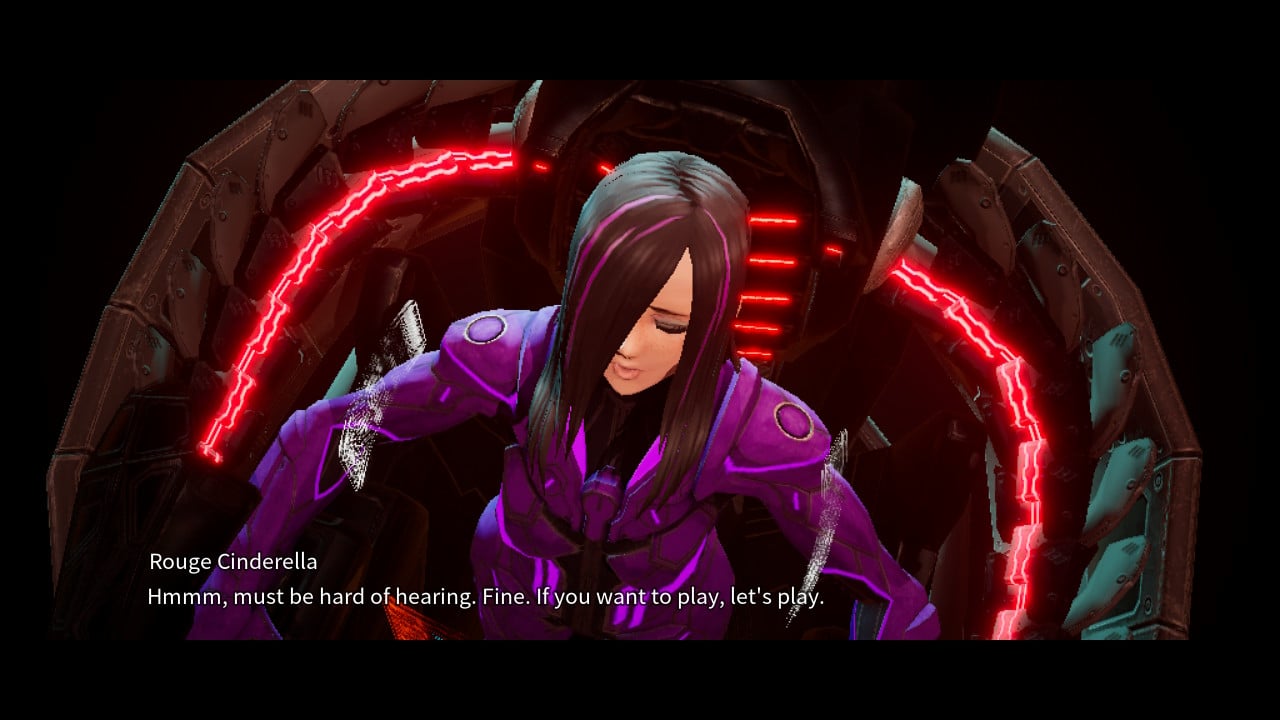 For combats, you will have your fully customizable mech, called an Arsenal, at your service. The latter is really the focus of the game. If the lack of focus on the narrative is anything to go by, Daemon X Machina can be considered a mech action shooter version of a car racing game. You can tune your Arsenal to your liking with decals, paintings (you can even scan graffitis during missions to later personalize your mecha) and, importantly, weapons. There are a lot of weapons in Daemon x Machina to choose from. From machine guns to rocket launchers to sniper rifles to flamethrowers to freaking swords and more, the choice is yours! The latter weapon is my personal favorite for cool and stylish finishers. Worry not about being cool or effective, as your mecha carries weapons on both of its arms, a shoulder weapon, an auxiliary one and one for each of the right and left pylon. You can swap between those on the fly to better adapt to the situation should you need a longer range weapon or a shield to ward off incoming bullets or, like me, use a sword to finish off a pesky Immortal in style. 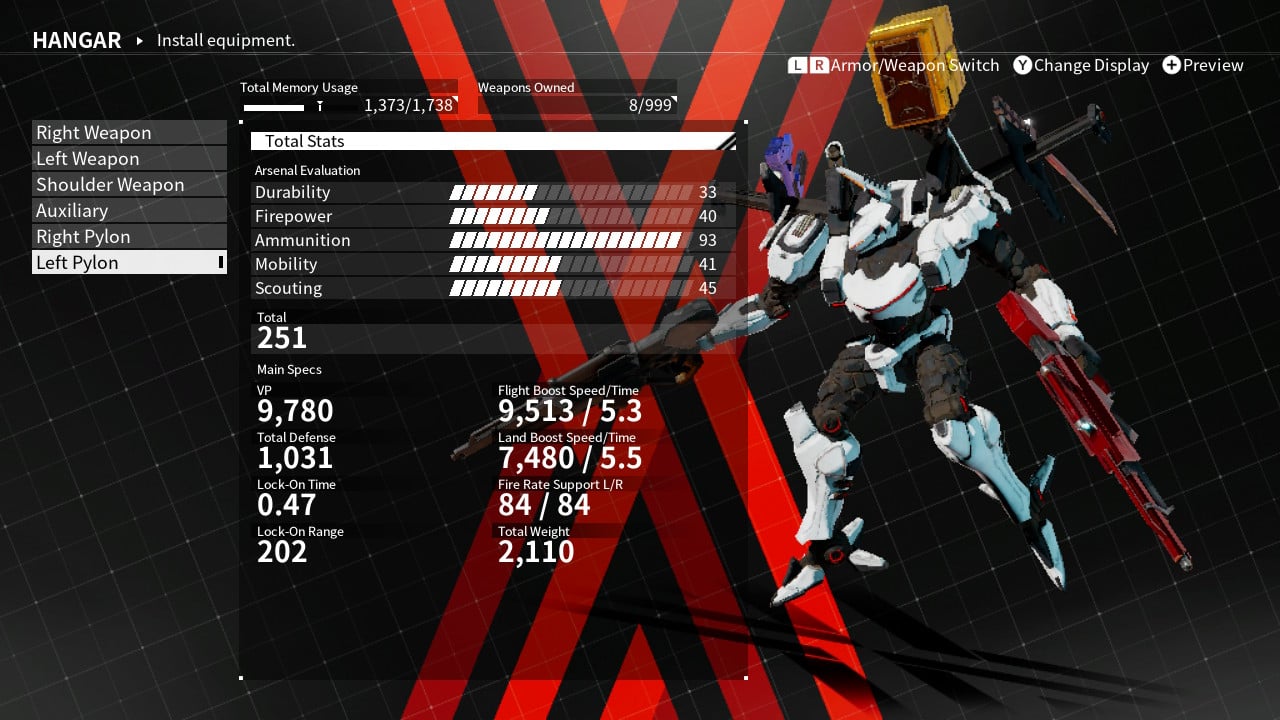 In addition to weaponry are the mecha’s modular armor. Split into modules named head, body, processor, right arm, left arm and legs, you can equip respective parts to your Arsenal to fine-tune it for optimal performance. Some parts can even help the Arsenal better withstand certain attack types or even equip it with a weapon. You can also salvage enemy mechas for parts to upgrade your very own once back at the Hangar.

There is also a shop where you can buy/sell weapons and armor and even a factory that will let you build certain equipment with the proper resources. 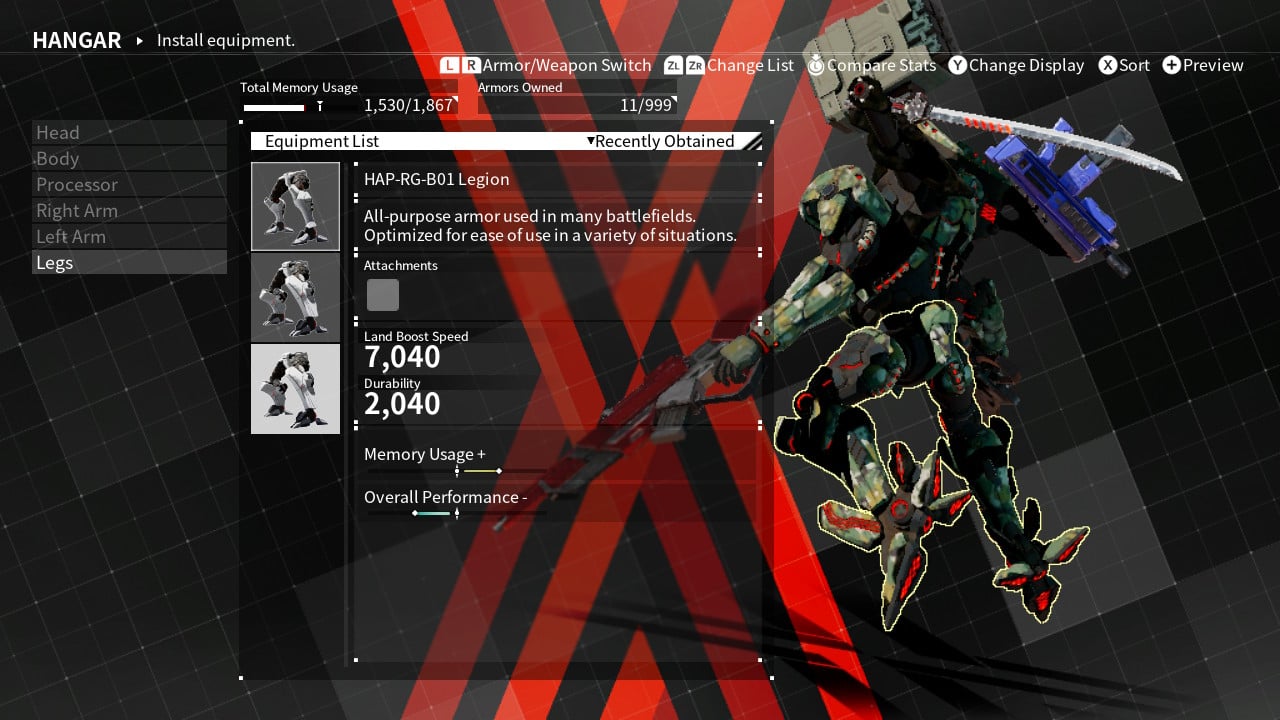 On top of equipment is an easy-to-grasp skill tree. Progressing through the latter not only enhances your Arsenal’s abilities but also that of your Outer, giving him/her more abilities like double jump or wielding a laser sword, because, yes, you can eject your avatar out of your Arsenal during fights and have him/her take on enemies or even mount another Arsenal. Such modifications can also alter the physical look of your avatar because why not?

While on the battlefield, you will find areas rich in Femto particles, which are basically your energy source which allow you to use laser-based equipments or perform cool tricks like creating a mirage of your Arsenal to trick foes.

However, despite the plethora of armaments and skills at your service, not much technique is required to emerge victorious of battles. Only a few boss fights got me to replay them but otherwise most missions were a one-shot affair. 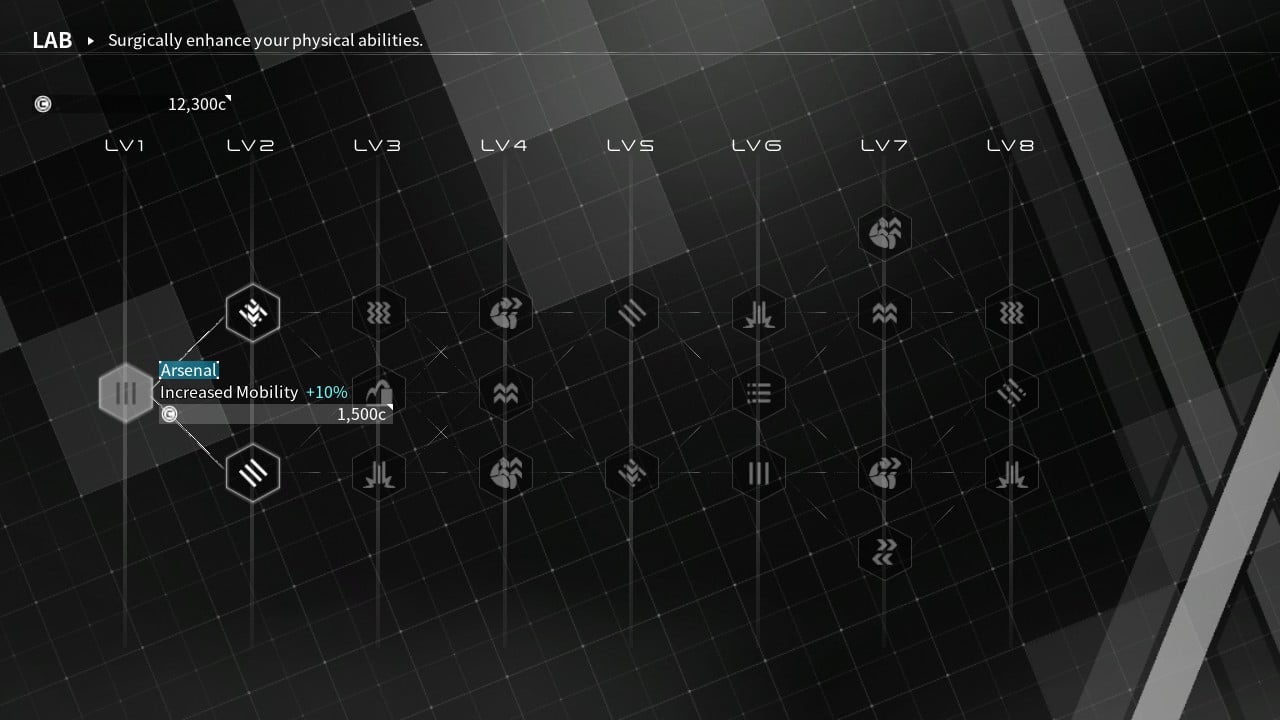 Missions themselves usually comprise of you and two other friendly Arsenals, with the exception of a few solo missions. It's cool to have AI buddies but it's not cool when they barely lend you a hand. It almost always feels like everything is conspicuously left up to you: defeat all enemies, place all explosives, and so on all by yourself in order for missions to progress or end. The flow does not feel natural but rather forced and the lack of subtlety is made evident yet again.

Unfortunately, missions feel more of the same with some few variations like placing bombs or recon missions which will often end up having you face familiar AI-controlled baddies (you'll find futuristic drones, helicopters, tanks and/or enemy Arsenals in almost every mission) in similar-looking environments. There is almost always some reinforcement or surprise foes who show up mid-mission (the term “unidentified units” will become quasi-integral to missions) and alter the initial aim of the mission. After a while these do not come as surprises but more as an expected outcome of every mission. Only when (if ever) a mission flows as it should, following its objective with no "surprise" visitors did I really feel surprised. But I’m not sure if this was the developer's original intention…

There are a few Outer missions where you infiltrate rival bases and what not as your persona and procure another Arsenal or intel. Such missions add diversity to the game but are introduced too late in the game and also mostly follow the pattern of surprise enemies with repetitive elements.

In addition to the main missions, there are Free Missions which can yield you more cash and loot and also online or local co-op mission. The latter do add some replay value and fun to this otherwise underwhelming title but you would most likely get this game for the full experience rather than an extra mode. 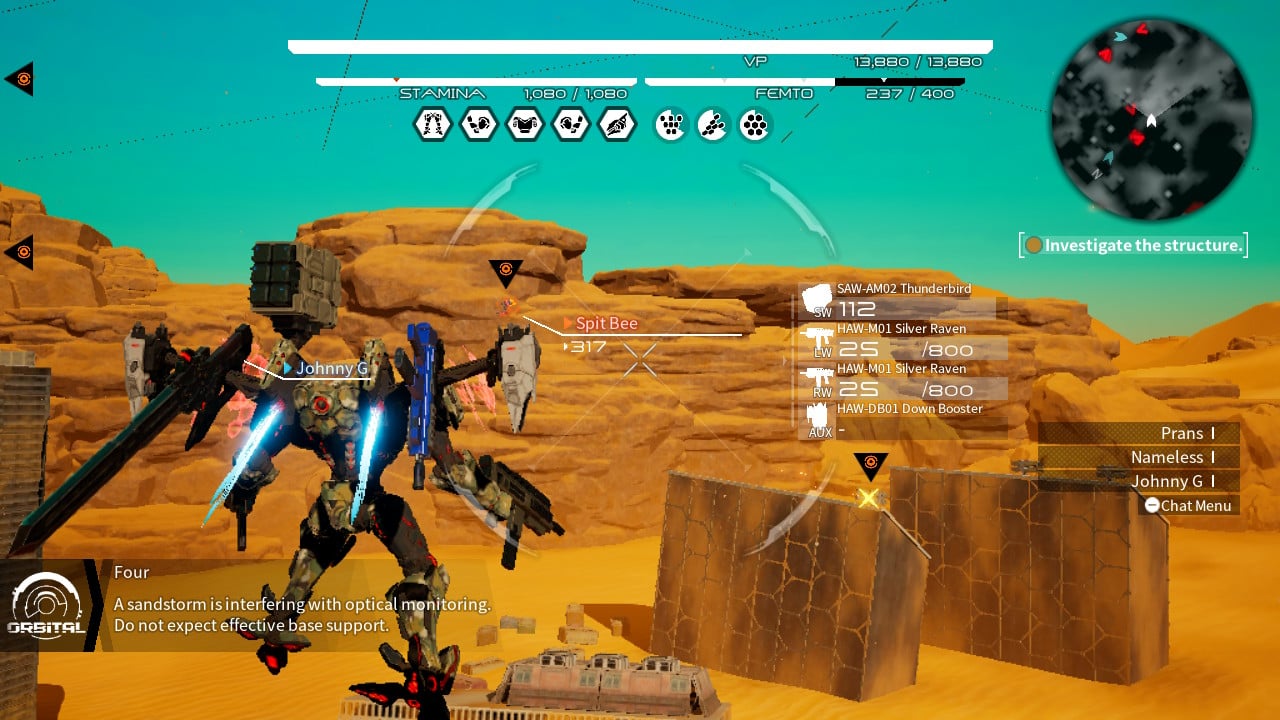 Daemon X Machina had a lot of potential. Even if you allow it time to sink in, the game sadly feels repetitive and disappointing.