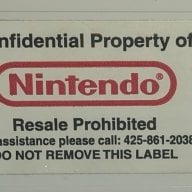 Hello I’ve recently purchased a Wii RVT-R wireless development system unfortunately I have no software for it and it doesn’t even have the menu installed is anyone with the NEC RVT-R writer willing to burn me a copy of the latest menu installer or is there any way for me to do it? Without modifying the system

Unfortunately there's no real easy way to install anything on an RVT-R Reader unless you have a bunch of RVT-R blanks and an RVT-R Writer.

What you *could* do instead is install a modded retail Wii disc drive, then burn a Wii Menu Changer image onto a DVD-R and boot that. Obviously this requires disassembling the system, but it'll also allow you to burn any debug-encrypted game to DVD-R discs instead of requiring expensive RVT-R discs.

Note that you'll have to reinstall the original RVT-R disc drive if you want to dump RVT-R discs using CleanRip. (I don't know if any modchips support RVT-R drives, which is why I mentioned using a modded retail drive for DVD-Rs.)

Keep in mind that there's two key differences between retail Wii discs and RVT-R discs:
Using a modded retail drive bypasses the first requirement, since it lets you use DVD-R discs. The second requirement depends on the disc image. In the case of Wii Menu Changer, those images are all debug-encrypted, so a DVD-R copy will work on RVT-R Readers with modded drives.
Last edited by GerbilSoft, Oct 19, 2018, Reason: +differences
Reactions: 037B

Thanks for your response it was very informative, I’m not going to tamper with the system but I have just got a deal on a Wii I suspect has a modchip because of a ribbon cable across its fan. I’m going to mess with it instead it only cost me 99p + £5 pp so don’t care about it much should be fun.

M
Homebrew Does anyone know where can find or have a disk image of the Wii menu changer V4.3?