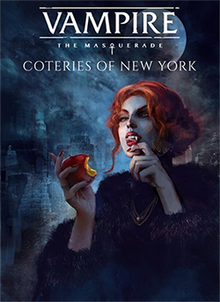 Single player
Local Multiplayer
Online Multiplayer
Co-operative
Modern day fantasy is a guilty pleasure of mine. Despite the fact that movies surrounding the concept usually turn out okay at best, I thoroughly enjoy watching them, reading modern fantasy stories, and playing games that include elements of fantasy mixed with the modern day. So the idea of a secret society of vampires operating in modern day New York City was interesting to me. How does the concept work out in Vampire: The Masquerade - Coteries of New York on Nintendo Switch? Read on, and let’s take a closer look!

The story at the center of Coteries of New York follows one of three playable characters as their life changes forever. The game begins with the death and transformation of your character, going from a human to a vampire fledgling, or new vampire. You’re then introduced to the secret, underground society of vampires living in modern day New York City. You’re taught how to feed on humans subtly, use your newfound vampiric abilities, and sent on a quest to obtain allies and build up your own coterie, or group of allies, all while a much larger plot of conspiracy and intrigue unfolds around you. You’ve got a limited amount of nights in-game to assemble your coterie, so wisely choosing which subplots you follow is important. There’s no way to experience every plot or character in a single playthrough, which gives the game its primary method of replayability, and gives a reason to try out each different character.

​
That said, this is actually one of my biggest complaints. As I mentioned, Coteries of New York gives you three separate characters you can play as, each with their own unique personalities and vampiric powers. With each one, you’re faced with making moral decisions that will shape both the character, and your path to the finale. The unfortunate part is that, no matter which character you’re playing as, the story still hits the same major plot points for each character, and the story concludes in the exact same spot. This makes sense, considering there’s only so much you can cram into a $20 game. But for a game that boasts about how full of choice it is, and how you’re unable to experience everything in a single playthrough, I was honestly a bit disappointed with how much repetition there was when trying each of the three characters. On top of that, the game is very short, taking only a few hours at the longest to run through the entire game with a single character. So while there’s definitely replayability here, it’s not gonna take you long to go through the entire thing.

​
Coteries of New York is set in the World of Darkness series, a shared universe of White Wolf Publishing’s products featuring traditional fantasy and monsters in a modern setting. Specifically, Coteries of New York takes place in the Vampire series, alongside the tabletop roleplaying game Vampire: The Masquerade, and the Vampire: The Masquerade - Bloodlines video games. I’m a big fan of shared universes between movies, games, and print, so this concept was intriguing to me. And, as the game centers around a new vampire fledgling being introduced to the world, I thought it worked really well as an introduction to the World of Darkness series. At the very least, it got me interested in experiencing more of this universe.

The art style is really one of the best things the game has going for it. Fitting since, as a visual novel, the art is crucial to the storytelling. The style is a mixture of dark and grungy, yet vibrant and colorful. It truly captures the essence of the story in a visual sense; blurring the line between life and death through colors, showing life by night with the atmosphere of New York City. It truly fits the story of an urban vampire. This art is directly influenced by the tabletop games’ art, lending some consistency to the aesthetic, and creating a complete package that truly belongs in a shared universe. 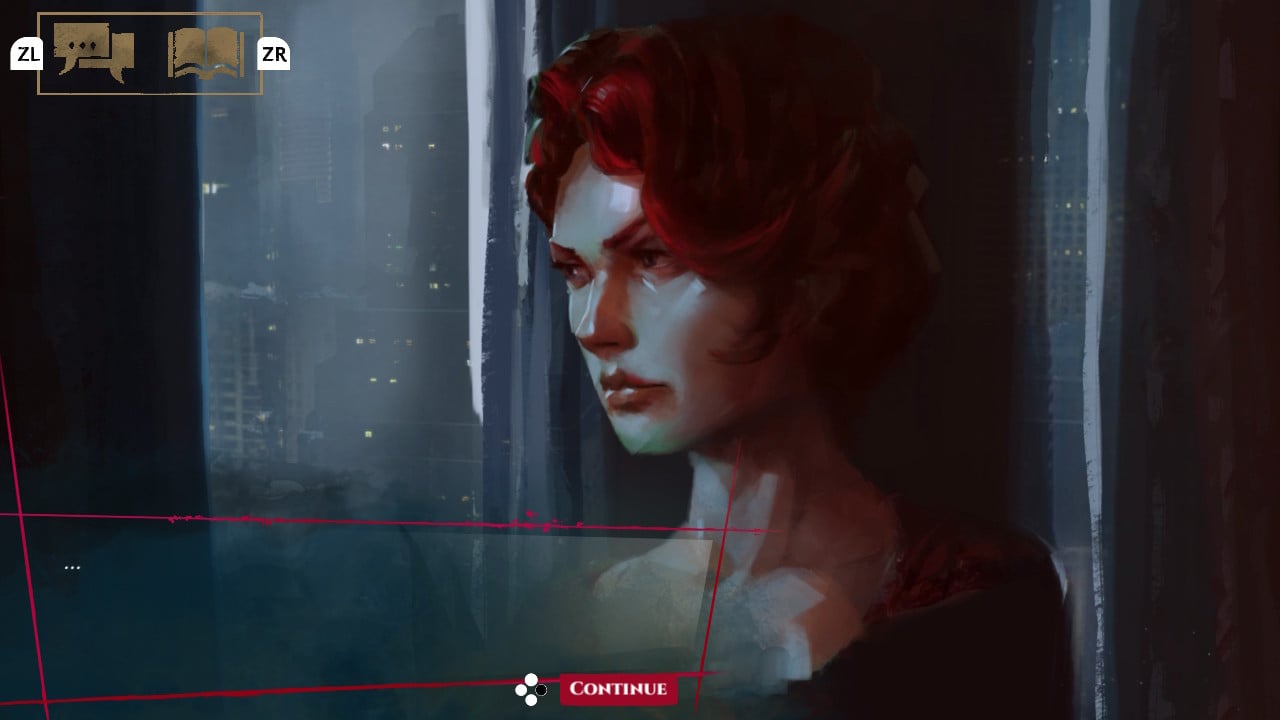 ​
The game is described by the developers as “a blend of atmospheric adventure mixed with emotional narration full of choices.” This isn’t an inaccurate descriptor, but the easier way to describe it is a visual novel. Like most visual novels, the gameplay is limited mostly to just making dialogue choices, interacting with NPCs, and experiencing the world in the way the developers intend. You’re able to choose your mission on the map, make conversation choices in dialogue, use your powers to progress the plot, and find someone to feed upon. The feeding mechanic is a nice addition that adds some strategic play; you’re given limited opportunities to feed on a human, and if you don’t feed often enough, you lose access to your vampire powers. Go too long without feeding, and you eventually lose control and give into “the beast” inside you. That’s the extent of the gameplay. It’s simple, but it’s all that’s needed for the visual novel.

​
Being part of an existing, shared universe, there’s a lot of established lore before you even get into the game, which is why I’m glad for the Dictionary feature. As you talk to different characters and get used to becoming a vampire, a lot of times the different phrases and clan names will appear highlighted in red, to indicate that it’s a new term or clan name. Rather than slow down the pace of the game and the conversation, it instead adds the term and its definition, and in some cases associated lore, to your dictionary. You can access the dictionary at any time, even in the middle of dialogue, to learn more about the world and familiarize yourself with the terms at your leisure. I found this particularly useful during a couple of coterie recruitment missions, where being able to access facts about the different clans helped my dialogue choices.

​
The game works fine as a standard visual novel, but given how much action and exploration is described without being seen, I can’t help but feel that this story would fit better in a Telltale style game, with explorable environments, puzzles to solve, and dynamic voice acting. So many large action sequences were narrated on screen, while you’re just looking at a static image of your area’s background. Even dialogue is just handled with a static portrait of the character currently talking. The art, as mentioned, looks good so you at least have something nice to look at while you’re reading, but it just doesn’t work for me nearly as well as it could. It’s okay as is, though I can’t help but lament the missed opportunity to create a truly engaging experience.

What We Liked ...
What We Didn't Like ...
7
Presentation
For all of its faults, the game still looks very good. And as an entry point to a larger franchise of games, it works great. As far as visual novels go, this is far from the worst one out there.
6
Lasting Appeal
The game has enough replayability between the three characters and the limited amount of missions available, but being so short means it won't take long to experience everything. And the amount of repetition in playthroughs gets boring quickly.
6.2
out of 10

Coteries of New York is definitely a game made to be experienced in the context of a connected universe. As an introduction to that universe, it works. As a game on its own, it’s just okay. Fans of the franchise will likely love it, and those who are interested in trying the franchise will find plenty to enjoy. But it’s hard to recommend this as a game for everyone to jump on.
Reactions: Ericzander, T-hug and splymb
Share:
Facebook Twitter Reddit Pinterest Tumblr WhatsApp Email Share Link
I am not as great a fan of modern world fantasy until it goes straight alt history, mainly as I am a nit picking type that will wonder why this does not happen and destroy an economy or become the dominant species. That said this franchise does better than most at making it all work.

"considering there’s only so much you can cram into a $20 game"
While branching paths does make things add up very quickly (5 unique branch points in a story with only 2 choices each is 16 end states hence the all roads lead to Rome approach many such things end up taking) I would expect something more for something that aspires to be in this franchise.
Reactions: RyRyIV
Imagine if they would have ported the game this is based upon. That would have been amazing!

XDel said:
Imagine if they would have ported the game this is based upon. That would have been amazing!
Click to expand...

Pipistrele said:
You mean the tabletop game? =)
Click to expand...

The old Windows game to be more specific; that style of game play.

XDel said:
The old Windows game to be more specific; that style of game play.
Click to expand...

Do you mean Bloodlines? Cause based on the gameplay footage I’ve watched, I can safely say I would’ve enjoyed playing a Bloodlines port a lot more
The following serves for a nice intro to/overview of bloodlines I think
There is supposed to be a sequel in the works as well out this year, though PC and the home consoles and I would be surprised to see a Switch version. Also, like many PC games of the era (especially the "small devs reach for the sky and make something interesting but flawed" take) it is one of those things that benefits somewhat from having a bunch of mods.

That said I wonder how many would remember Redemption (the other PC game from a few years before, back when said years actually meant a fair bit, which had its fans but failed to become as much of a cult classic).
Reactions: RyRyIV

@ AncientBoi: anyways, ta-ta, and enjoy your day 2 minutes ago
Chat 2