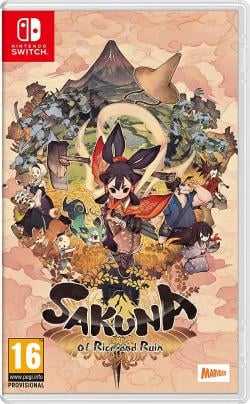 A game many years in the making, was Sakuna worth the wait?

Sakuna: Of Rice and Ruin is a game many people have heard about, subsequently forgotten, and heard about again. First shown in 2016, and featured at three consecutive E3 events, Sakuna has been a long time coming. I’ve found myself excited for it several times over, and now that it’s finally being released, I can say the wait was worth it. 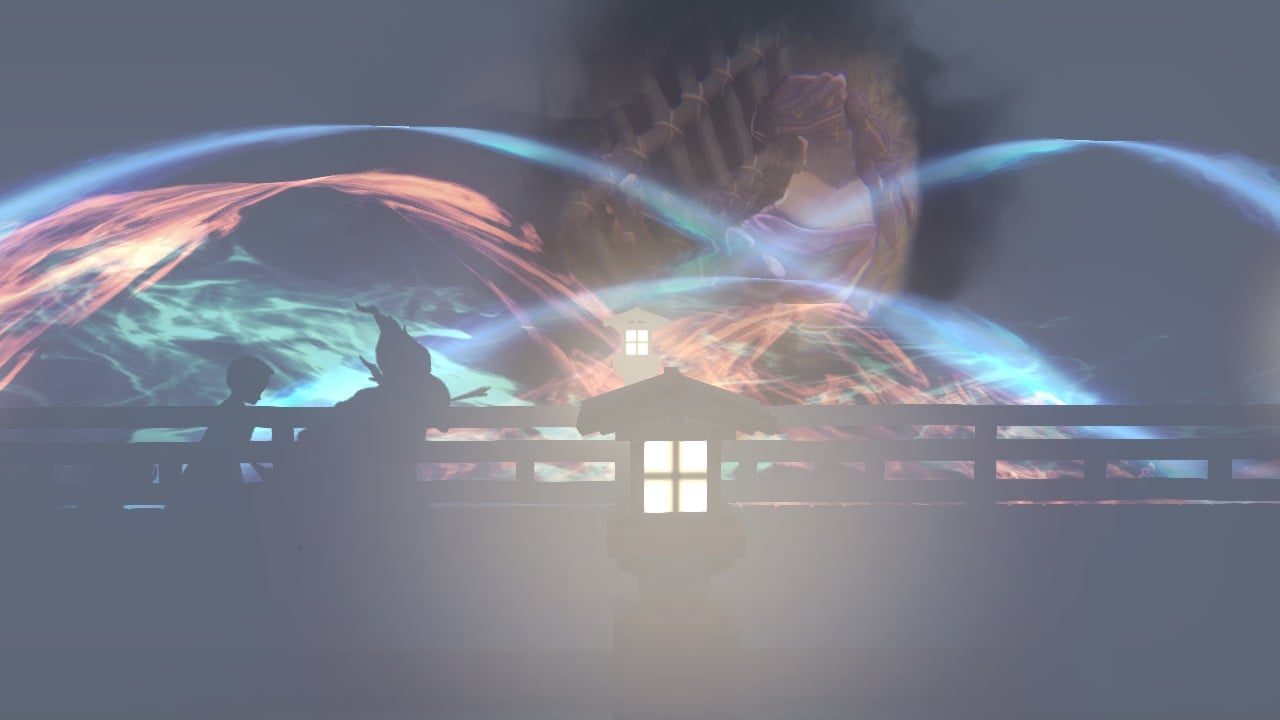 Kicking off on a grand bridge, our story begins with not the titled goddess herself, but a group of lowly humans fleeing a world of strife. Surrounded by fog, their hazy memories blur into the background. Despite an echoing warning to turn back, they press on. They walk, lifeless and void of hope, until an unexpected foe greets them: the armed hoodlum Ishimaru. With no other option, a quivering samurai in the group turns to fight… until a tipsy girl in ornate attire graces the scene. After an offhanded comment comparing her to a child, she promptly smacks Ishimaru off the bridge, before walking back to the banquet to reacquaint herself with “the joy of intoxication”. Once more ignoring advice to turn back, the group follow the girl in hopes of finding food, and it’s here things start to go wrong for our small heroine. The humans work their way through the capital, eventually stumbling across the many offerings of rice and sake for the celestial ruler Lady Kamuhitsuki. In trying to chase them off, Sakuna ultimately knocks over a candle, setting the offerings ablaze, and landing herself in a whole heap of trouble. Her punishment? Banished from the capital, her life of luxury comes to an end, allowed to return only upon ridding the Isle of Demons of… Well, its demons, quite unsurprisingly. With the humans by her side, they set sail for a new life.

I adore the opening sequence. From the music, to the art style, to the voice acting, and even the smaller touches like the story of our human group being told silently as they walk across the heavenly bridge, it’s stylistically marvellous and entirely gripping despite presenting you with very little in actuality. You learn of the two realms, the Lofty and Lowly realm, you learn of the harvest goddesses, you learn of the humans and their plight, and finally, you learn of the spoiled goddess, now separated from her inherited wealth. It sets the stage wonderfully and swings open a delightful door for character development, because let’s face it, Sakuna isn’t a great person. 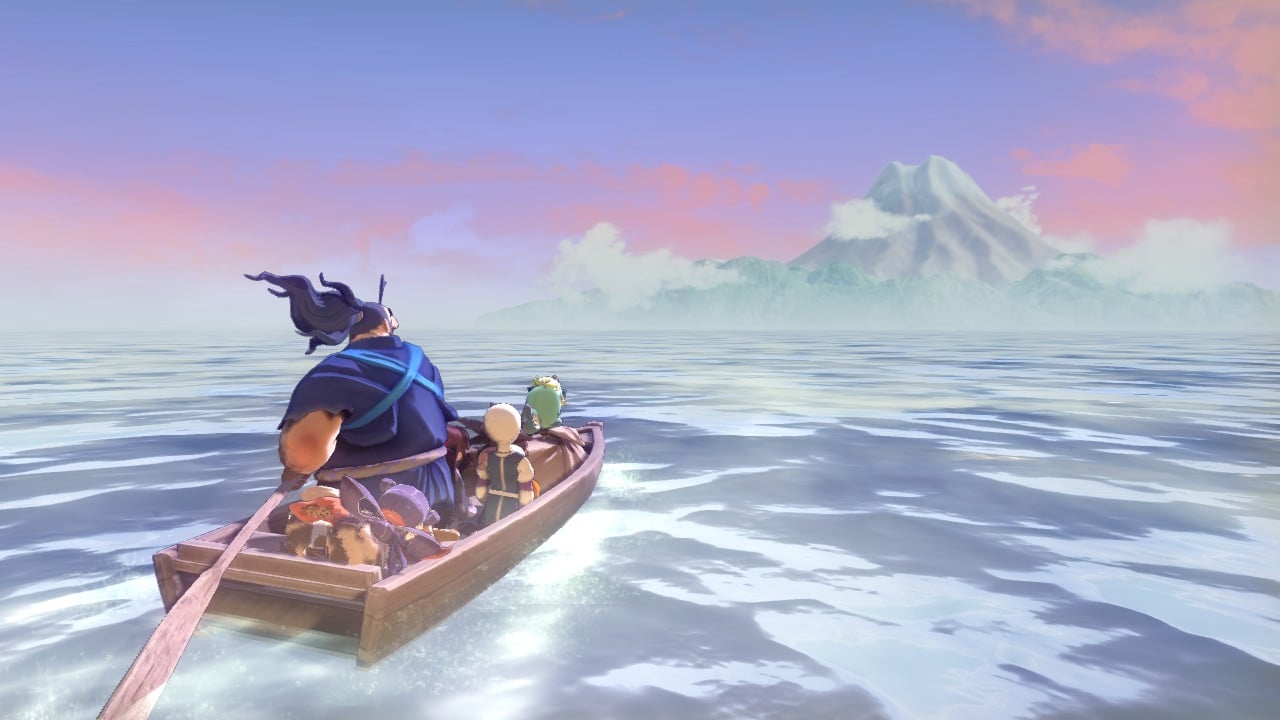 The monster culling of the game is set in a 2D side scrolling environment oddly reminiscent of Umihara Kawase for its grappling mechanics. Using Sakuna’s Divine Raiment, you’re able to grapple onto walls and enemies alike, propelling you in whichever direction you find yourself latching onto. Add to this a relatively standard mix of light, heavy, and customisable special attacks, and you have a surprisingly robust side scrolling experience, though one I admit didn’t quite gel with me at first. In the beginning especially, the game feels slow. Levels are sparse as you learn mechanics and things are steadily introduced, and while I do appreciate why this is, it made me yearn for something to make it go faster. A dash, a double jump, if nothing else just something to blindly occupy me as I walked through the slower initial areas. I am glad to say this is short-lived though. Once past the first few areas, you struggle to find yourself without something to do on a screen. Be it a platforming challenge, a particularly tricky grapple, or even a more standard encounter of the demon kind, your time is filled in a meaningful way, and it only gets better as you play more. You grow from a clumsy childlike player to something much more as you come to terms with the controls, learn the combos, and unlock more special moves to mix in. It is insanely satisfying to pull off strings of attacks as you dodge and grapple around demons like the cannon fodder of Attack on Titan. This sense of clumsiness and growth go deeper than the combat though, and seep into every aspect of the game. 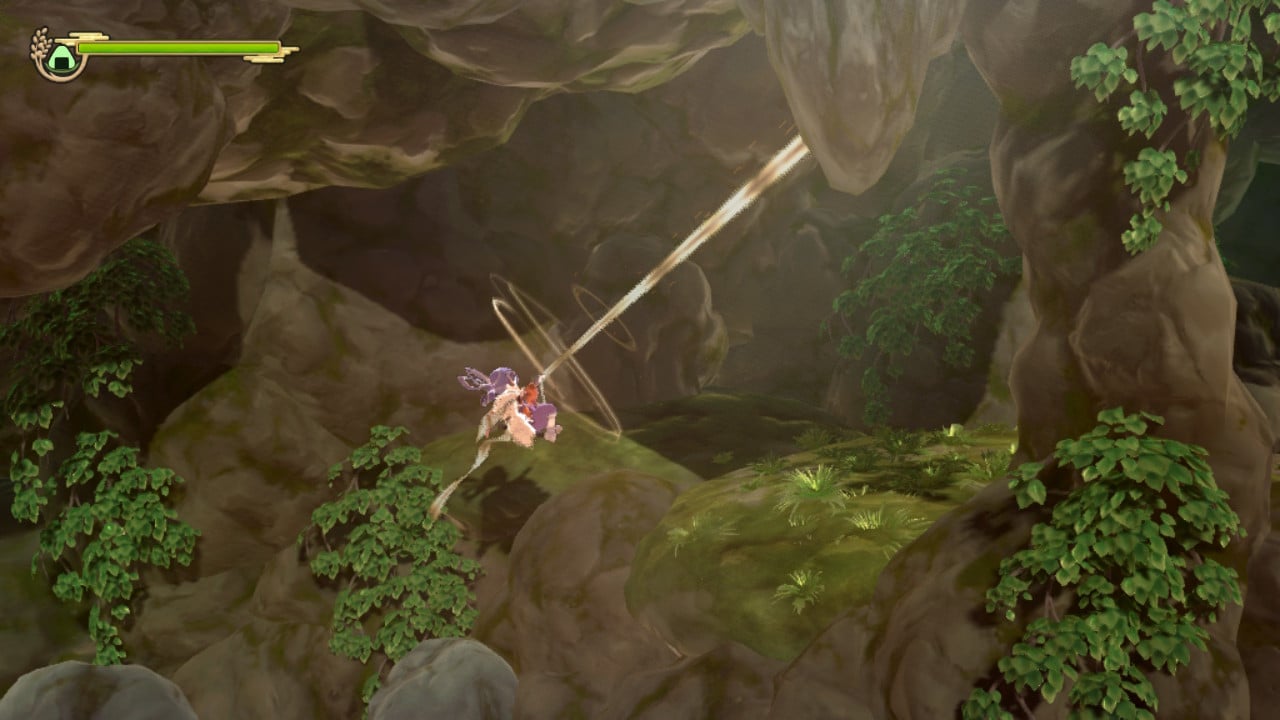 As a farming goddess, it should come to no surprise that the other half of this game is growing rice. While the combat areas are side scrolling 2D environments, your base camp embraces something more modern, and comes in the form of a stunning 3D mountaintop to freely roam. It’s here you can talk with your new human buddies, rest for the night, eat for stat bonuses, and, as mentioned, grow rice. Starting out with a small field just in front of the cosy shack of a house, the game throws you in at the deep end with the most basic of instructions, before berating you for doing it wrong. I love it. Plant the seeds it said. Well, that’s all it said. You live in the inexperience of Sakuna, and as frustrating as it is to be told you’re not doing a great job, it again leads to this sense of growth. You’re not going to get it perfect the first time, and that’s fine, at least to an extent. My field of sporadically-placed seedlings did ultimately thrive, and I knew I could do better next time. Stick with it and the game rewards you. After a few fields of strewn seedlings, Sakuna gained a skill that put a little grid down for me to see the ideal spacing. After pulling so many weeds, Sakuna gained a skill to spot them more easily. You put in the effort, and you get something for it, not to mention the actual benefits of farming rice. You see, there’s no formal level up system in this game. Instead, your strength comes straight from the quality of your grain, and there’s a brilliant number of factors that go into a perfect harvest. How do you want to balance your fertiliser? Do you want your rice to focus on growth or bonuses when eaten? How close together were your seedlings? Did you pull every weed? Did you harvest soon enough for the crop to dry? It’s so hard to get a perfect result, but it should be. It’s in the etching closer to it where the joy of the game is found. 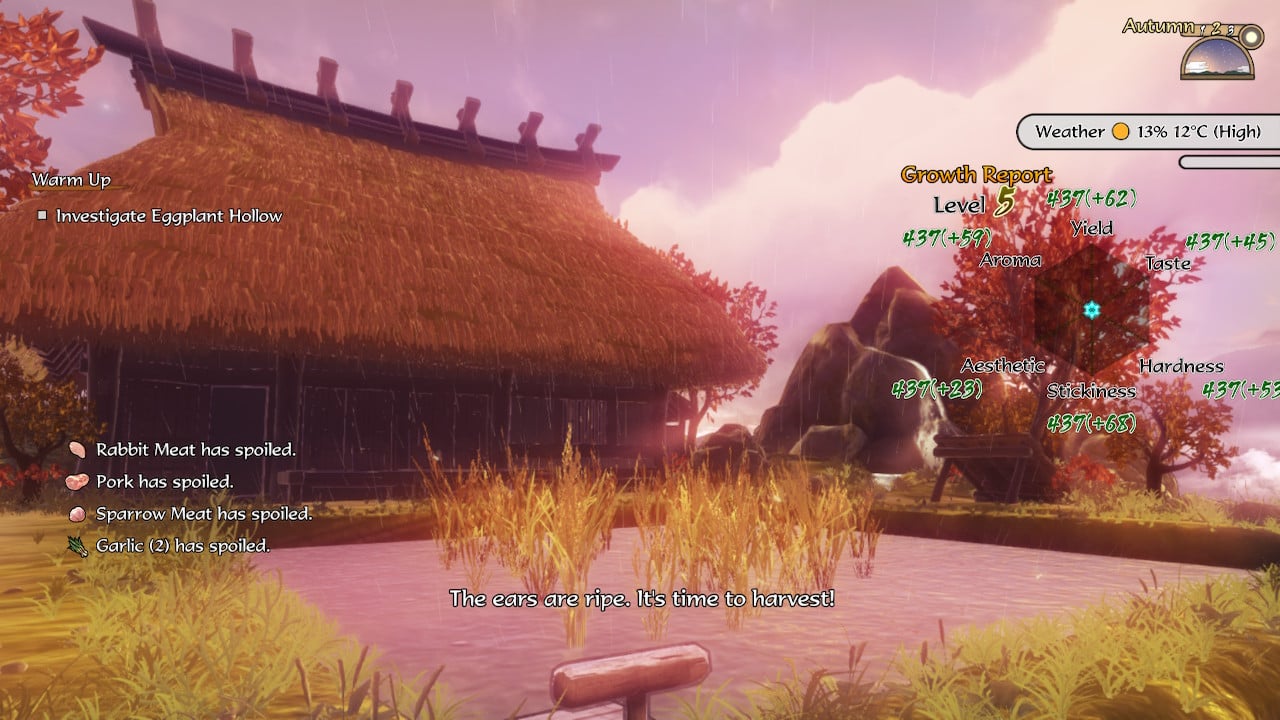 Clearing out monsters and progressing is a fairly simple process. Each area comes with a list of objectives, and in clearing these, your exploration level increases. As your exploration level increases, you can venture further out, unlocking new areas, and in turn, gaining access to more objectives. These objectives are comparable to the stars of Super Mario 64; you don’t need all of them, but you can skip over a few less desirable ones if you decide to collect everything early on. What you’ll need to do varies from map to map, but it usually boils down to an assortment of “collect X of this”, “defeat X of this”, “find a secret treasure”, or “clear the final part of the area”. While the variety isn’t all that impressive, it doesn’t feel repetitive thanks to the area design. You’ll have some focusing on a gimmick, like launching enemies into things, others with a spotlight on platforming, vertical stages standing out to me in particularly here, and others with multiple zones to work through, sometimes even with a boss at the end. Varying in length and complexity, the game manages to feel fresh without necessarily reinventing the wheel every other stage, and the mix-ups it does throw in keep you engaged in a way where they’re a bonus, in oppose to a focus. A nice example of this is a boss that’s made available to fight right at the start of chapter two. You can fight it right out of the gate, and hey, with enough skill and dedication, you can more than certainly beat it, but you can just as easily fight it and get completely wiped out. You’ll reach a point where you have to pick between going all in to outplay it, or just explore the other areas available to you while you also work on building your strength with farming.

Since each season lasting just three in-game days apiece, it’s easy to shift focus when you find yourself stuck. With the seedlings being planted at the start of spring, harvested at the end of summer, and left to dry throughout autumn, faming is a year-long process, so I’m glad it's not drawn out too much. While still a primary mechanic, it’s streamlined to the point where it doesn’t feel a chore. It’s a difficult balance to maintain, but I feel it’s done well here. I found myself in a circle of demon hunting until I hit a roadblock, farming in a Rocky-style training montage, and returning to thwart the evil, rice power in hand. 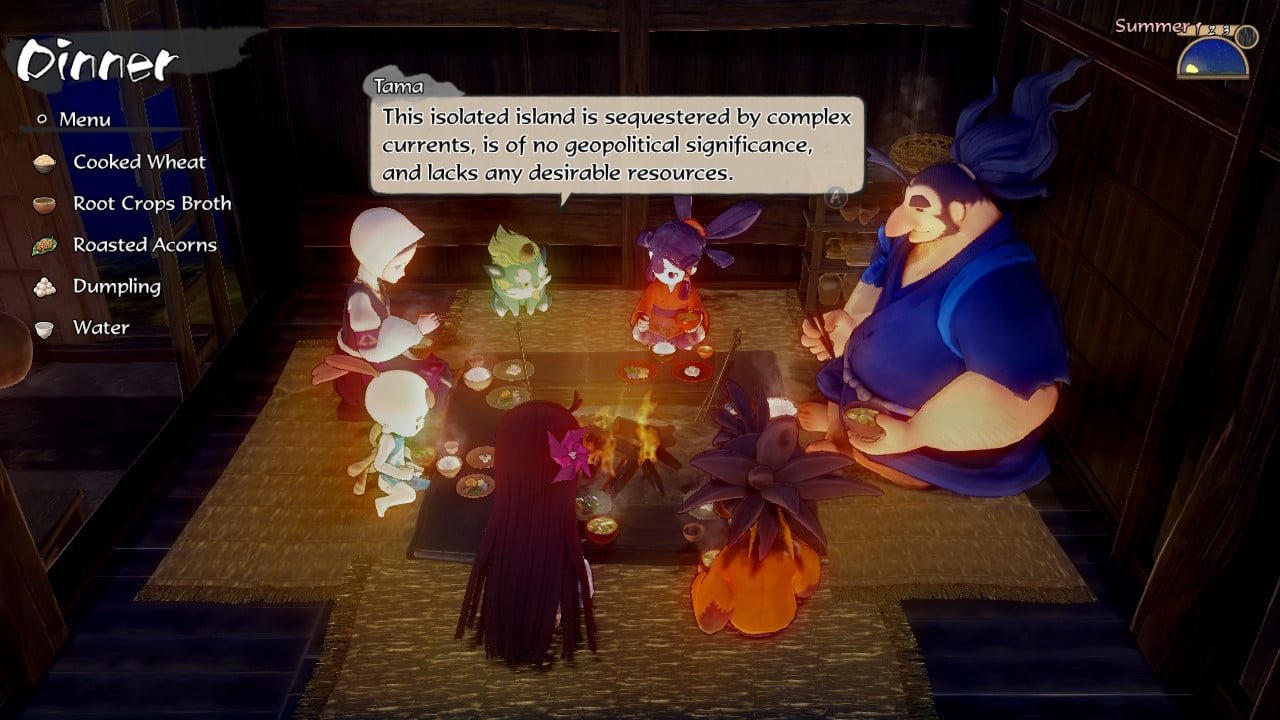 There are also small quirks to enjoy, like mealtime talks.

Really, Sakuna: Of Rice and Ruin is a great game. I struggle to summarise it better than that. A unique idea blending two fond genres in farming and 2D fighting, it’s a joy to play, and one I’m more than happy to have waited for.