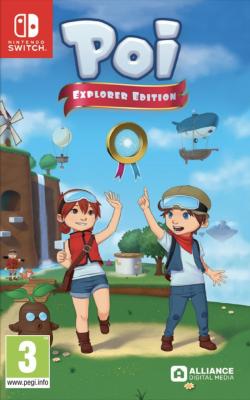 Poi: Explorer Edition is a love-letter to classic platforming, but when sized up against the technical marvels that inspired it can Poi leap into a place on the 3D platformer pantheon?

​
Many games tiptoe the line between love homage and frank plagiarism, and it takes a special touch to pay lip-service to a beloved franchise without being written off as a cheap "clone". Massively successful indie darling A Hat in Time, a technical marvel for its origins and a loving homage to our old love Super Mario Sunshine, was injected with enough charm and identity that sometimes you could get lost in it and forget that it was ever meant to be a tribute at all. To begin with, it's only fair to say: no, Poi: Explorer's Edition will not enrapture you so much you forget to notice its roots, and even during the most fun parts of the game you will likely find yourself chuckling and noting to nobody in particular that you saw that in Ty the Tasmanian Tiger and you saw this in Super Mario 64. That being said, Poi: Explorer Edition is charming in its shamelessness, and knows itself and its origins well enough to play to them satisfyingly and endearingly.

Poi: Explorer Edition is a mission-based 3D platformer with collectathon elements, making the game at its most basic level comparable to Ty the Tasmanian Tiger, but in presentation the game is most similar to non-collectathon mission platformers the likes of which were pioneered and perfected by Super Mario 64 and Super Mario Galaxy. You have four primary worlds and two sub-worlds, each classically themed with aesthetics like "desert" and "snow", and in each of these worlds there are seven Explorer's Medallions (Stars) to collect at the end of a particular objective, such as "Collect 7 Keys" (Red Coins), or "Defeat the Boss". In Mario-fashion, you select a mission, you're whizzed to the world, and the game has a little scenario to set the scene for you to platform around, solve a puzzle or so, kill an enemy or so and grab the Medallion. The end-goal is to collect the 101 Medallions while searching for a way to locate a long-lost treasure.

​
The game's primary strengths, and the point in which it sets itself apart from competitors and genre veterans, lie in its breadth of things to do. While beloved Super Mario 3D platformers have dozens of locations to visit and collect Stars in, versus Poi's piddly six-at-a-stretch, Poi more than compensates with its variety of side-missions and objectives tangential to hopping and yahooing through the colorful cartoony worlds. In addition to completing these worlds' missions, the player can receive Medallions a number of ways in the air-ship hub. Mini-games like a watered-down Minesweeper, a Wing-Cap inspired flight course, a sand-storm sign-guided maze and an enemy gauntlet are provided to the player at three different difficulties with the staple Medallion McGuffins as rewards. The player can get Medallions from performing task-based missions like "jump so many times" or "take pictures of so many different enemies". On top of that, the player can compete in small focused challenge-based levels instead of sprawling worlds to get Medallions. And, as if all that weren't enough,, in addition to the core objectives, the game has the player sweep every world in order to perform collectathon fetch quests which involve gathering the five Golden Gears scattered throughout every level, gathering fossils and documenting every distinctive locale in a world. While the game is technically smaller in scope, it gets almost the same mileage out of its six worlds as a regular run of Super Mario 64 gets out of its dozens. The tasks keep every run feeling fresh, rewards the player for playing certain ways and promotes exploration of its worlds.

With its own innovations, Poi would go on to use its borrowed elements to good effect. All the staples of 3D Mario are there, including the somersault jump and triple jump, and they mostly all work well with the game. The levels themselves are designed well enough; just big enough and nonlinear enough to promote exploration, but focused and linear enough to prevent the player from getting hopelessly lost. The worlds are populated by plenty of NPCs to talk to, all with some vague quirks. Many of the missions draw from Super Mario 64, such as a repeated Hide-and-Seek quest in place of the Slider races, and there's enough unique and enough repeated missions that the game shows well enough that its willing to make an effort while playing to its inspirations.

​
However, not everything in Poi is happy and cheerful to experience. As I mentioned multiple times, the game shamelessly and endlessly derives gameplay elements and design choices from big-name veterans, and while the love plays to nostalgia, sometimes it becomes distracting how derivative the game is. The levels are all designed well-enough, but the game only shows a glimmer of challenge at some choice moments. This lack of difficulty is especially disappointing with the bosses, half of whom are oversized mooks and all of whom are totally nonthreatening. The game also features a host of technical problems, including an uncomfortable air-slide, collision issues, essential collectibles clipping irrevocably into walls, oftentimes imprecise controls, finicky wall-jump and ledge grab, and very imprecise hitboxes, especially on fire obstacles. Low-texture and highly polygonal environments also make the game feel incredibly antiquated despite the fact that as of writing this review it is only three years old.

​
But, in spite of its shameless stealing from better, more polished, bigger titles, and its incredible amount of issues that make it shameful in comparison to recent indie technical marvels like A Hat in Time and Yooka-Laylee, Poi: Explorer Edition shouldn't be passed up. The game does just enough well and plays just well enough to nostalgia and has just enough of its own innovations that even if you're distracted by noticing a bunch of stuff you've already seen in other games you won't be unhappy playing it. For $10 (previously $15), and being as good and as long as it is compared to any similarly-priced item, Poi: Explorer Edition is an absolute steal for 3D platformer completionists. The game should find a happy home on the Switch of anybody who has been thirsted by the lack of many new major entries into the genre in the last decade and a half.
Verdict
relauby likes this.
Like this review