"No matter what, a fake is a fake, and no matter how much you try to dress it up, the real thing always wins!" - Midna (probably referring to fake Legend of Zelda clones)

You know the old saying "If it looks like a duck, swims like a duck, and quacks like a duck, then it probably is a duck"? Well on the surface Legend of the Skyfish may look like a duck, but it sure doesn't swim or quack like one. Of course, the "duck" in question is a little known series called The Legend of Zelda. After all, just look at the cover of this game! Pseudo-Hylian font, a young protagonist looking out into the distance, the incorporation of the word "Legend" in the title, and the word "Skyfish" being an obvious homage to the "wind fish" from Link's Awakening. This has to be at least a little similar to The Legend of Zelda... Right? Wrong. Let's explore. 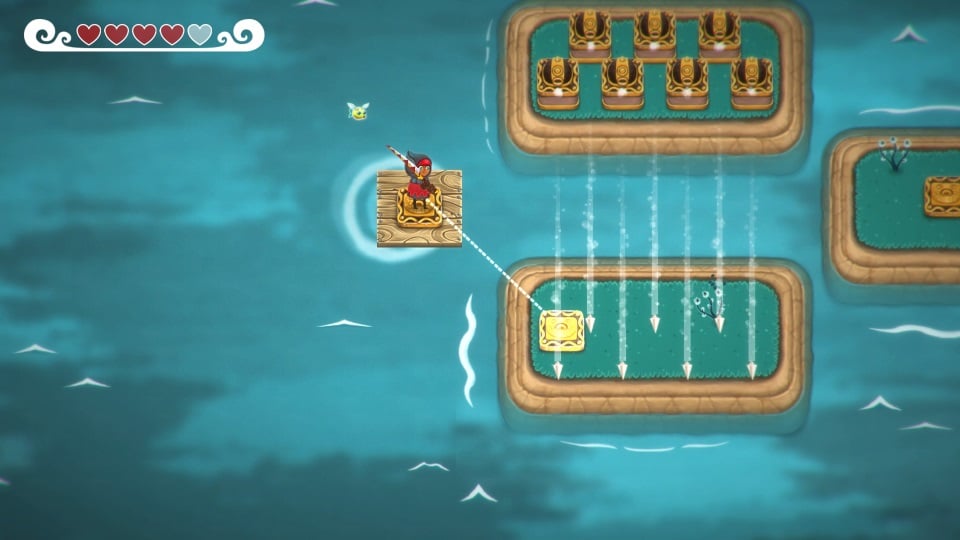 In this game you play a young woman by the name of Little Red Hook. Is that her birth name or her title? It doesn't matter because you'll forget it very quickly. The game starts off with a voiced cutscene explaining the plot. Little Red Hook lives in a peaceful village of fishermen who make their living harvesting the riches of the sea. One day, the fishermen unintentionally disturb the evil Skyfish (who lives in the sea?) from his slumber. This provokes the Skyfish to summon an army of creatures to destroy the world. All of the villagers, including Little Red Hook, get their asses handed to them. Little Red Hook is saved by the Moonwhale (not to be confused with the Windfish) who her to go on an adventure to save the villagers. Or something, it doesn't matter because the plot is quickly discarded until the very last part of the game.

Let's talk about the gameplay. There are three worlds in this game with 14 levels and a boss fight in each world. While 42 levels and three boss fights may sound like a lot, the game can easily be beaten in about three hours. Each level requires you to follow a set path with only the absolute minimum amount of exploring necessary to get additional items. I say absolute minimum because, aside from two exceptions in the last world, your fairy companion warns you whenever you're near one of the few optional areas to explore. I found this annoying because the game gives you absolutely no reason to search around on your own to find hidden paths. Honestly, I don't know if "hidden path" is even the right terminology because for the most part you only go off-path for about 10-30 seconds to get the item before walking back to where you were before. 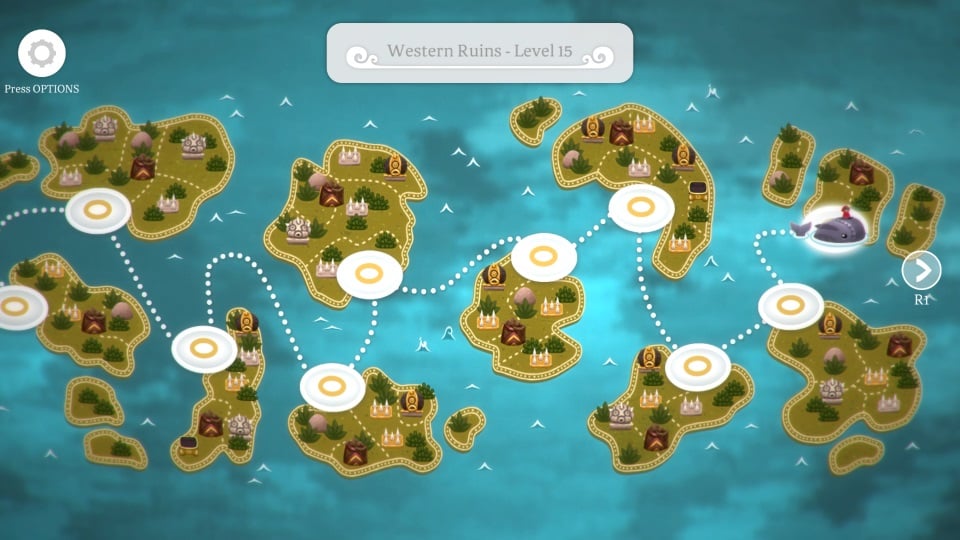 This game gets repetitive rather quickly. The first 14 levels take absolutely no skill at all. And that's not an exaggeration. The paths are laid out in a way that a young kid with little to no gaming experience can figure out what to do almost immediately. If the first 14 levels are considered a 1/10 in terms of difficulty, I'd give the following 14 levels a 2/10. This is because the second world incorporates a few more puzzle elements than the first world, but they're still as simple as "step on this switch to open this gate and then walk over to the gate before the timer runs out." I'll throw the game a bone and say that the final 14 levels were a 4/10 in terms of difficulty and felt like a breath of fresh air because in at least one instance there is a multiscreen puzzle that takes the minimum amount of effort to figure out as opposed to the earlier levels where no skill is needed. The problem is, by the time I got to the third world I was too burnt out to appreciate the moderate increase in difficulty.

The level design wasn't the only repetitive element. Each world introduces you to three enemies. However, the three enemies are essentially just reskins in each world, so it's never interesting to encounter a new foe because you already know how to defeat it—grab it with your hook and then stab it one to three times. It's like the developers saw the hookshot from TLoZ and said "let's make a game utilizing JUST this feature!" This game claims to be an adventure game and a puzzle game, yet it feels like neither. 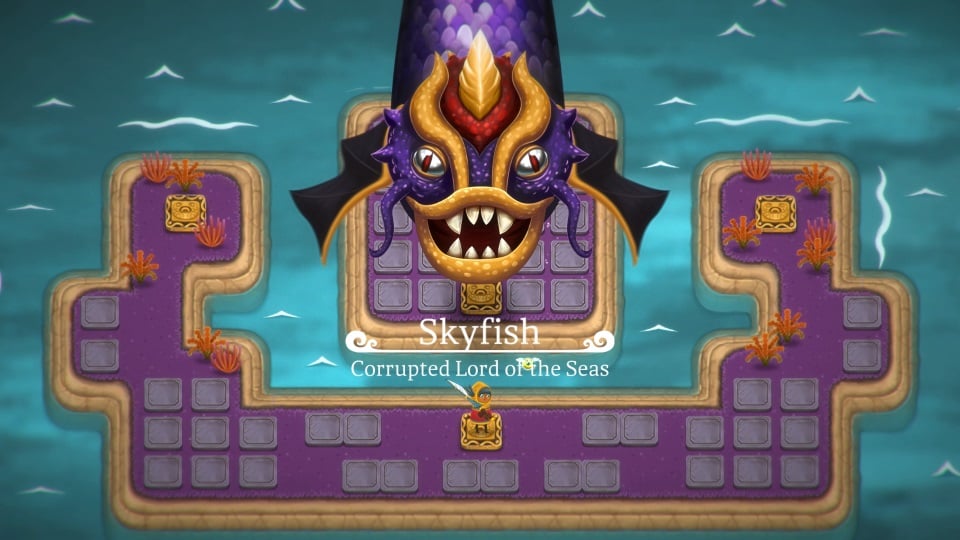 I mentioned there are three boss fights, and I really wish that I could say they were the saving grace of the game, but I just can't do it. The first two can be defeated within a minute just by rushing them and hitting them a lot before they knock out all of your hearts; no skill involved, just run to them and stab them a lot. The final boss is more interesting because it is similar to the Agahnim fight in A Link to the Past where you have to reflect his energy balls back at him before stabbing him a bunch, but even that fight is rather bare-bones. I would have less complaints if all of the bosses required a strategy like the final boss instead of what we got. Once you beat the game, you see the final cutscene and then... that's it. The saving grace for me, as a PS4 trophy hunter, is that this game was quick to platinum. I didn't even have to think about it because all of the trophies/achievements are almost certain to come naturally except perhaps the one that requires you to beat a level without taking damage.

There's a reason I'm being so harsh with this game. While it's $3.99 on Android and IOS, it's $7.99 on consoles and PC. The developers are relying on the title to remind you of Zelda so you'll be encouraged to grab the game. It's a bait and switch strategy that I'm not a fan of. This game may be worth $4 as a mobile game, but there are dozens and dozens of titles that are more worth your $8 than this. When I was given the opportunity to review a game titled Legend of the Skyfish I eagerly snatched it up, only to feel the sting of not enjoying it. I would be more more upset if I spent $8 on it, so I'm advising you against it. Maybe this game is worth it if you're only getting it for a child, but I still think that you can find a better game than this for your money.