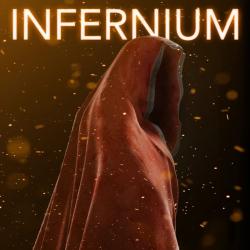 Single player
Local Multiplayer
Online Multiplayer
Co-operative
Infernium is described as a "Souls-like, survival horror take on Pac-Man" by it's developer, Carlos Coronado. Is it truly this seemingly odd combination of genres?

Infernium is described as a Souls-like, first person survival horror Pac-man game, and man is that a real unique description!...and unfortunately, it's almost none of the those things. First person survival horror? Absolutely!  Pac-man-esque? If by "Pac-man" game the developer means running away from enemies and dying in one touch, it's close! But Souls-like? Not even a little bit. To really know what I mean, let's dive right in to what the game is actually about!

...at least, that's what I'd like to do normally, but Infernium doesn't really have much story or lore in-game. When you start the game, you're just shoved headfirst right into the exciting gameplay! Any story or lore that you come across in the game is the result of stumbling upon random, slightly inconspicuous graffiti that's written in the style of diary entries by someone named Marina. Presumably, if you find all of these entries, you'll get the general idea of the story, but in my initial playthrough of the game, I found perhaps 5 or 6 total, and the most story I got was that Marina was on some shrooms, and then somehow she decided to kill her friends so she could be in the Infernium world all by herself. Not exactly an award winning, compelling story, especially when it reads more like poor fan fiction than a proper game story. "But Tom, you said 'not much story in-game!' so surely this means there is story elsewhere, right?" And indeed there is, in the form of the Infernium Wiki (which I was so graciously given a link to by the developer when I received this review code). You see, it's not until you actually read part of the wiki that you even know what in the world you're supposed to be doing in the first place. According to the Wiki, your goal in Infernium is to find 4 "Harvesting Fingers"...and then reach the end of the game, I guess?

So the story is kind of nonexistent, but surely the gameplay must be great then! But again, that's an unfortunate "no". Starting out in Infernium, you're placed in a pretty decent looking world, with little orbs of lights scattered all over and a funky looking magic hand, a pretty good start all things said and done. Exploration is the main component of Infernium, and is done in a non-linear manner with a lot of quite pretty and ominous looking locations available to explore and run around in while avoiding enemies. But, as you encounter these enemies, you come to realize your magic hands have a whole 4 functions that are incredibly disappointing: The ability to absorb light from little light orbs scattered across the world which acts as a type of mana, the ability to teleport various distances (which is available at the beginning of the game), a flashlight that can be used to get rid of one enemy type, and a kind of magical key that gives you access to various light doors. And that's kind of it, there aren't any fireballs, no cone of cold, no lightning bolts, no real offensive abilities of any kind beyond the flashlight that only deals with one enemy. So what do you do when you find an enemy? You run away, using strategically placed corridors and red lines on the ground to keep enemies away from you, because if they touch you even just a tiny little bit, you're dead.

Which brings me to one of the more interesting things about Infernium, the inclusion of a "sort of" perma-death system (more on why it's "sort of" in a moment). Whenever you die, you're taken to a level called "The Purgatory", and in this level you'll find 25 giant sphere's of light. As such, these 25 sphere's indicate how many death's you have until you enter the perma-death state. What does this mean? Well, essentially, it means you're no longer able to leave Purgatory through the black hole thing that's smack dab in the center like usual. Instead, a door that's previously always closed will open, and provide you access to a new area. And what does this new area do? It "gives" you another death, by means of a "Light Pit". While you're still limited to a maximum of 25 deaths at a time, it becomes less permanent and just more pain in the ass side quest to get back to exploring the world.

But gosh is it pretty to do so. Infernium is made using Unreal Engine, so it has that "high graphical fidelity" that one might expect from your average Unreal game, and this does help with the atmosphere which is quite important for a survival horror game such as this. Featuring a Photo Mode, which allows you to place various filters and other such things is available from the start, which can really give you gorgeous looking pictures of the environments. There are spooky caves, gorgeous looking cliffs overlooking the sea, and properly old looking buildings with tight corridors that could hold who knows what! Unfortunately, that's all it really has going for it in this particular category. Infernium has an annoying lack of atmospheric sounds which becomes extremely apparent when you play the game for more than half an hour. Whenever you encounter an enemy, the same old creepy sound and music is played which gets less scary and more boring. Most areas have the same exact atmospheric noises going on, which most includes your footsteps, random heavy breathing, and the occasional monstrous groan. Which is exactly what you'll sound like when you encounter the same two enemy models that are present in the game. The more you play Infernium, the more you start the realize the developer really kind of took the easy way out in this regard. There are essentially 3 different kinds of enemies, the Cloaks, the Walkers, and then because designing a third monster model is oh so difficult, invisible enemies that are only visible thanks to water effects like rain, or ripples as they walk through puddles. While initially they looks quite spooky and can, in some cases, cause the occasional scare, much like the atmospheric sounds it ends up becoming more of the boring same.

Infernium is certainly something else. It's not quite the Souls-like, Survival Horror Pac-man game the developer thinks it is, and it's certainly not something that's all that well put together. If you like running away from the same 2 enemy models with slightly different colors, don't mind the absolute lack of story beyond bad fan-fiction on random walls, and like dying to enemies around the corner, you'll love Infernium. Otherwise, it's best to stay away.
Reactions: MarkDarkness, DarthDub and T-hug
Share:
Facebook Twitter Reddit Pinterest Tumblr WhatsApp Email Share Link
- Enemies have virtually no variation beyond different color schemes.
- One hit death makes playing the game infuriating, especially when exploring any area for the first time.
- Annoying lack of any explanation or story, beyond random "diary entries" you come across while exploring that read more like bad fan-fiction than story.
- Lack of varied background noise brings about no atmosphere for the game.

Sounds a lot like any 'souls' title. Good clone then.
Reactions: chartube12
Reploid excuse me did you just claim that dark souls and bloodborne have "virtually no variation beyond different color schemes", "Annoying lack of any explanation" and "no atmosphere"? You have clearly never played the games, the first area of bloodborne is packed full of background noises, the whole game is a lesson on atmosphere and it has a very strong story about your character discovering the eldrich truth and what micolash and willem did to mess up the land.
Reactions: LoatheMe, jDSX and T-hug
So it is another dark souls. What a waste!
I'd rather play Pac-Man.
Reactions: CallmeBerto and chartube12
Apparently there are pro-Catalan independence Easter eggs in the game.
No thank you.
Reactions: THEELEMENTKH
Seriously, what a dumb thing to say. This is probably one of those kids that couldn't get past the first level and holds an eternal grudge over it.