Headsets are a borderline necessity for online gaming these days. There’s a ton to choose from, so finding the right one is crucial. Today we’ll look at the HyperX Cloud Alpha S headset, and see if it’s worth the $129.99 price tag!

To most dedicated PC gamers, HyperX shouldn’t be an unfamiliar name. The company is known for having a hand in just about every type of peripheral you’d want for your PC. Headsets, keyboards, mice… the company even offers RAM and hard drives to upgrade your tower. On the website, the company tagline claims that “we’re all gamers,” and looking at the products they offer, there’s some backup to that claim. 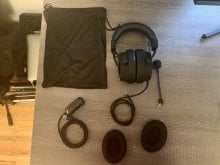 When it comes to headsets, HyperX offers a lot to choose from. They range in price anywhere from $25 to $300. This specific headset is the Cloud Alpha S, an update to the popular Cloud Alpha headset. The Cloud Alpha S comes priced at $129.99, putting it “middle of the road” relative to HyperX’s other headset offerings. Is this roughly $30 price difference from the original Cloud Alpha justified on the newer model? Let’s take a look at the tech specs to find out!

Looking at those specs, some of the bigger changes from the original mode are immediately obvious. Aside from some small changes to mic sensitivity and sound pressure level, there’s three features added to the Alpha S: 7.1 surround sound, bass sliders, and detachable mic. Going strictly by the numbers, I think there’s enough here to justify the raise in price over the standard Cloud Alpha. But looking on paper is one thing, how well those features work in practice can vary wildly.

Aesthetically, this is just a really nice piece of equipment. The unit I received came in the “blackout” color, though a blue option is available as well. Personally I love the all black color scheme, and it fits the rest of my PC setup perfectly. The frame is made out of a very sturdy aluminum that keeps the headset light without making it feel cheap. It’s all really sleek and good-looking, but the aluminum does smudge very easily, and it’s not super easy to clean that off. Which is a shame, because it does distract a bit from how good this headset looks. 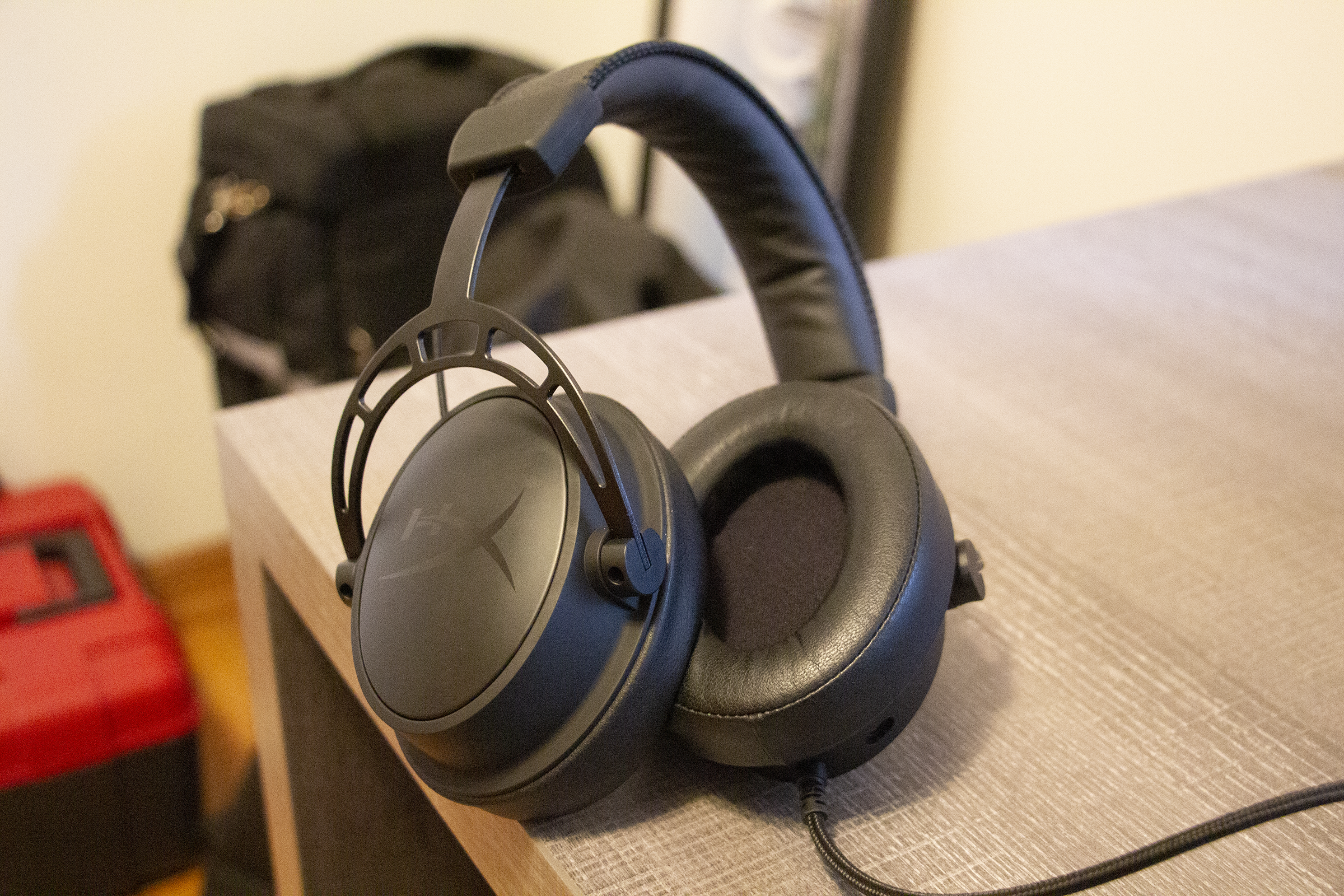 The ear cushions that come on the headset are a nice leatherette, which are designed to be more breathable than the Alpha S’s predecessor. Though if you’d prefer, the headset comes with two fabric ear cushions that you can swap in for the leatherette ones. I’m glad to have the options included, but I find them more trouble than they’re worth. The fabric cushions breathe a bit better, but they’re a chore to get on the headphones themselves. Personally, I recommend sticking with the already attached leatherette. They’re more comfortable than the fabric, and they breathe fine enough for my taste anyway.

Setup has never been easier. The headset outputs to a standard 3.5mm jack, which itself can be plugged into your PC to be used as a set of headphones. This route obviously removes any mic features from the headset, but the option does exist, and on their own this is a nice set of headphones with clean audio output. To take advantage of the mic and surround sound options, you simply plug the jack into the chat box, which itself connects to the PC through a USB Type A. Here I feel the sound quality is just cleaner, especially when turning on the 7.1, and is definitely the best way to set up the headset. But either way, you’re getting really crisp audio. HyperX uses a dual chamber system that separates the different frequencies, and you get the benefits of that system no matter how you set up your headset.

The star of the show here is the virtual 7.1 Surround sound. It turns on with the simple press of a button on the control mixer, and it offers the best sound you can get out of the headset. I was playing The Elder Scrolls V: Skyrim while testing the sound, and as I played I honestly felt totally immersed in the world. The sound came through crystal clear, with no distortion or “crackling” like you get from some headphones. While listening to music and doing some video editing, I had the exact same experience, total immersion in what I was listening to or working on. When you disable the surround sound, everything, naturally, feels flat in comparison. This is to be expected, but it really speaks to the quality of the headset with how noticeable the difference is. It’s almost night and day. 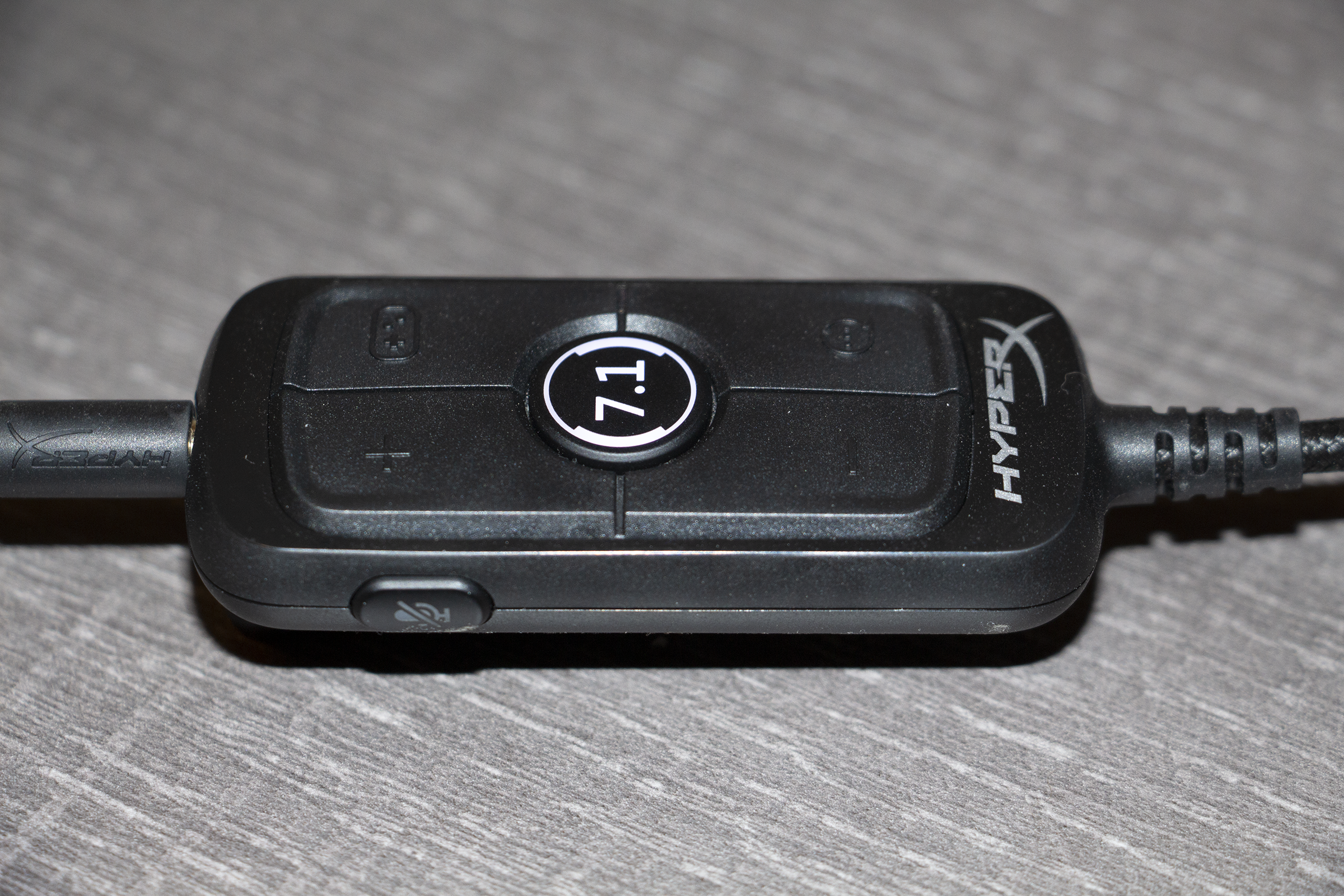 On the control mixer, you have the ability to adjust your computer volume, which is a welcome feature. More important, though, is the feature of being able to mix your game and chat settings to your liking. If you’d rather hear your friends and teammates more clearly, and don’t much mind the sound of your game, you can set it that way. If you want to mix it so you hear both game and chat at equal levels, there’s an option for that, too. The mixing here isn’t particularly complex, but I really like how you’re able to fine tune your different audio levels here, and feel that it adds a lot to the headset.

The bass sliders were something I was very interested in when I read about them on the HyperX site, but in practice they’re really kinda negligible. There’s three settings here: raise the switch all the way up for maximum bass, close them entirely to reduce it as much as it’ll go, and pop it in the middle to have a bit of an in-between. I like the concept here, but the bass levels just really don’t pop on the headset. When it’s opened up for the maximum, you get a decent amount of bass but certainly nothing worth bragging about. Closed completely, you definitely can notice the lack of bass, but it’s an overall pretty small difference. In between, because of this, just doesn’t sound like anything’s been done. I won’t go as far as to call the system broken, but it’s definitely not a feature worth spending the money to upgrade for. That honor I would absolutely attribute to the 7.1 surround sound, however.

Mic quality is, obviously, one of the most important factors when looking to buy a headset. Whether you’re just looking to chat with friends while you play, or need to communicate with team members for online games, a good microphone is crucial. The Alpha S has a detachable, noise cancelling headset that’s certified for Discord and TeamSpeak, according to the HyperX website. I’m a fan of the detachable mic, as it gives more flexibility in how you use the headset, and means that I don’t have to have a mic in my face if I’m using the headset to listen to music or edit videos. As for the mic quality, a quick chat with my friend over Discord allowed him to relay to me that I sounded very clear, without any mic crackling or spikes in my volume. For a test I also recorded a short audio clip in Adobe Audition, which I’ll attach as a video below.

As I mentioned in the video, the noise cancelling isn’t perfect, but it does work really well. While larger noises such as my phone ringing and dogs playing in the same room could still be picked up, the mic isolates your voice from the ambient noise of a room and keeps you sounding crisp and clear. It’s not the best noise cancelling I’ve seen in a mic, but it gets the job done and I'd absolutely call it high quality. 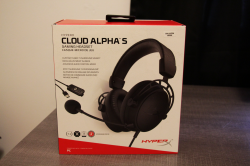