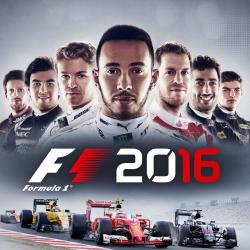 F1 2016 is one of the most realistic racing games ever made. It aims for strategic perfection in all areas, sacrificing accessibility for hardcore simulation. It's clear that Codemasters' intention was to create a convincing Formula 1 experience while still keeping it fun for players not as involved in the sport, but unfortunately the former too often overtakes the latter.

Annoyingly, the built-in AI for the CPU racers is often buggy and quizzically bad. Often you will get penalties for crashing into computer-controlled cars which drift into places that make little to no sense. Too often, races are lost due to the annoying CPUs. I have to say, the online multiplayer felt like a much more legitimate experience. 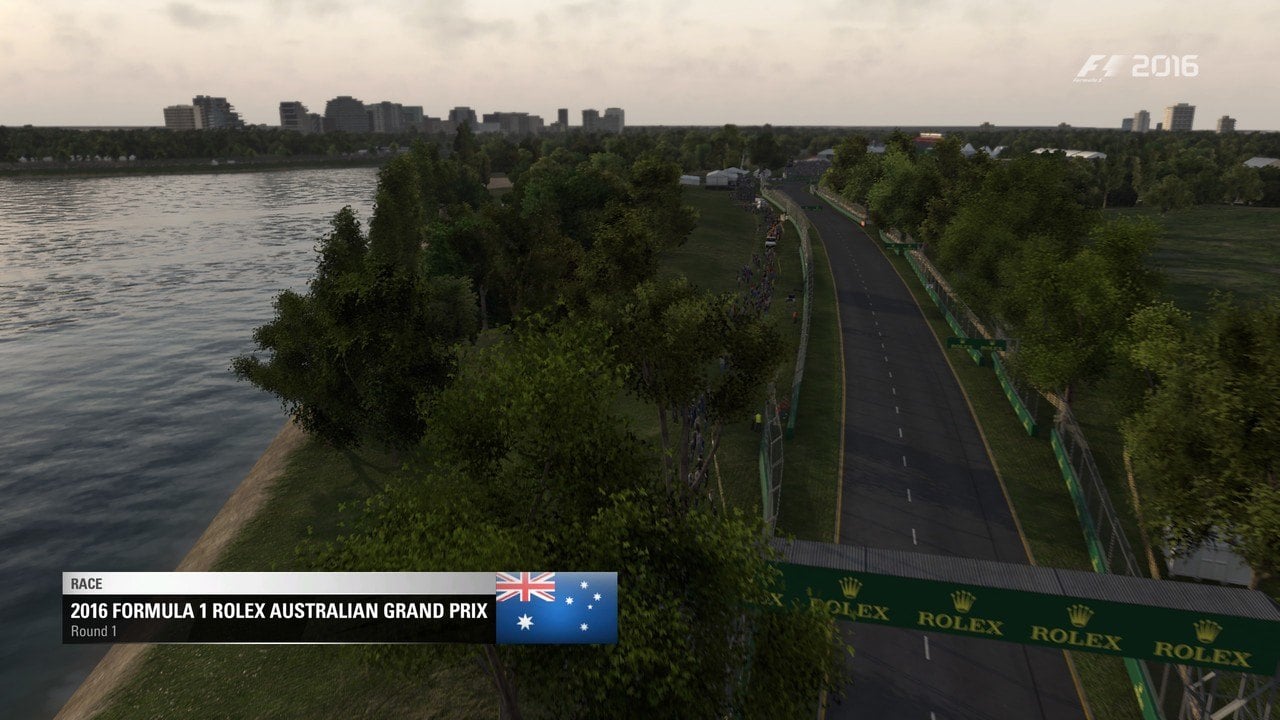 Every mechanic is insanely complex, from the mid-race HUD managament system to the extensive tire choices to the drag reduction systems. Taking corners is by no means an easy task, even on the lowest difficulty. I wouldn't have a problem with this level of difficulty if F1 eased the player into it, but it does quite the opposite. It's very hard to enjoy most of the game's content when the learning curve is so high that it's practically non-existent. If you're a huge Formula 1 fan, then you may well recognize and be able to manage this game's load of features, but I don't see how the game appeals to anyone else. I think the level of strategy and knowledge the game requires on higher difficulties is unique, but unfortunately there is a major lack of tutorials to teach the player these elements. F1 2016 relies too heavily on a prior knowledge of previous games, and doesn't take any extra steps to make itself comprehensible to anyone who isn't as specifically knowledgable.

Perhaps the most exciting feature is the new Career Mode. The player can, after creating a character, pick one of many Formula 1 teams to sign a contract with. Throughout the mode's ten seasons, various other contracts may become available based on performance, with larger teams expecting higher records. It promises the real experience of being a Formula 1 driver; each race weekend involves many practice sessions leading up to the big race at the end. I'm happy to say that the Career Mode hits the nail on the head, and is no doubt the most exciting feature in the title. It's a lot of fun on both the management and racing side of things, as it gives you ample time to practice and customize your car before the big race at the end of each weekend. 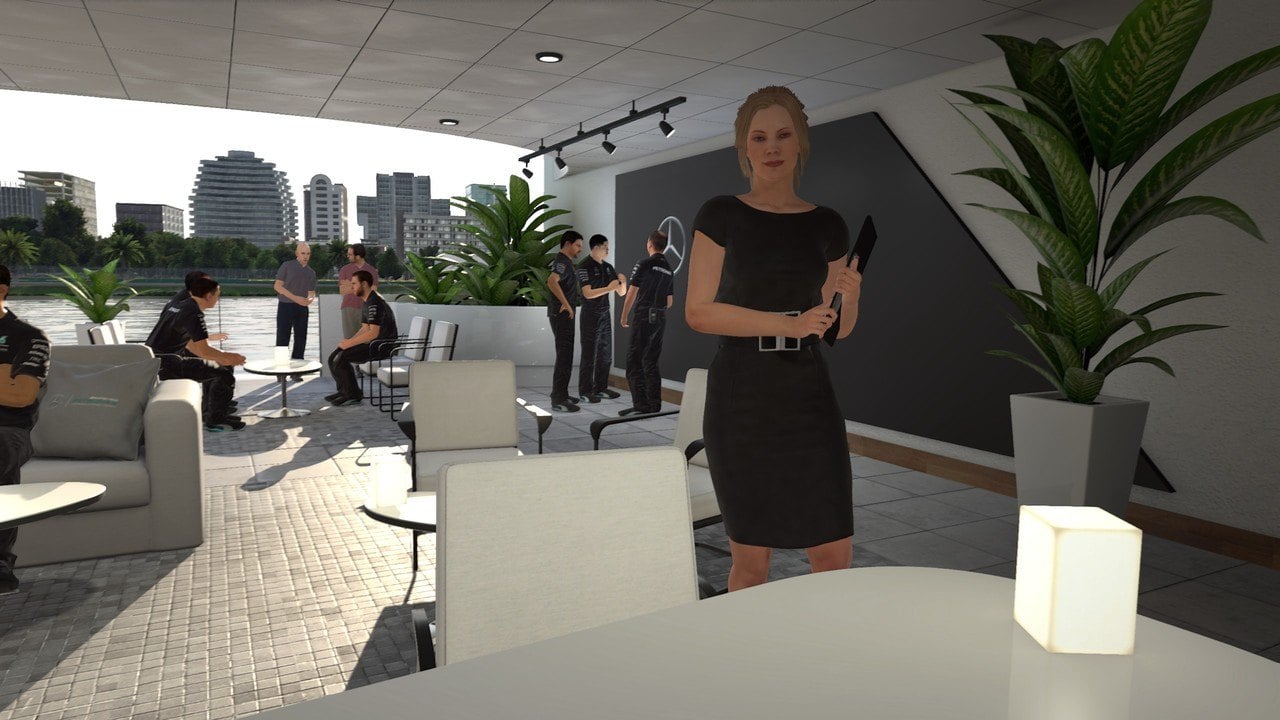 Unfortunately, most of the other game modes fall short in comparison. Quick Race. Championship, and Multiplayer modes are all available, with most being pretty self-explanatory. Online multiplayer functions well, with no issues surrounding large races other than the AFK player. Championship mode feels like a half-career mode and only takes you through one championship season without as many managing frills as the ten seasons of the Career mode. Clearly, most of the effort went into the Career mode which is alright with me considering how fantastically it works.

F1 2016 runs about as smooth as a real Formula 1 engine. I noticed no framerate drops and had no issue with lag or unresponsive controls, which is critical in a racing title. Overall the performance was fast and reliable, and the customizable controls were tight. 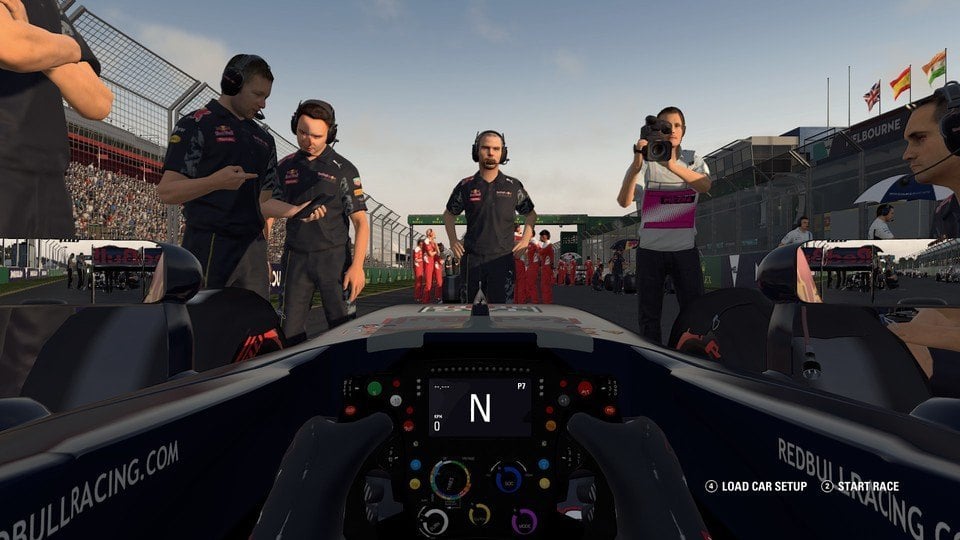 I was satisfied with the visuals as well. The cars themselves look bright and crisp during the whole race, and the environments around all the many tracks are designed well. Some driver models look a little outdated for a current-gen game, but it's understandable given the other assets which are being rendered at 60 FOS the whole race. Commendably, the game is able to balance crisp visuals with smooth performance at all times.

Even the sounds keep the racing atmosphere present. Roaring and purring, the engine noises are convincing and enveloping. There are commentators who get old very quickly and generic crowd noises as well, and though nothing in the audio department shines beautifully, I think the sounds do a great job of creating an enveloping racing experience.

What We Liked ...
What We Didn't Like ...
7
Gameplay
Lots of content and a stunning career mode contribute to the gameplay, but some mechanics are overly complex and require a real Formula 1 racer to understand.
8
Presentation
Though some of the assets look outdated, overall the performance was great and the visuals were satisfying. It's a very immersive experience.
7
Lasting Appeal
A good number of game modes are present, but after a few full career mode run-throughs, a lot of variety is lost. Many of the game modes are simply stripped down versions of others.
7
out of 10

F1 2016 nails the content and visuals, but fails to ease the player into most of its complicated mechanisms. To a Formula 1 fan, it's a masterpiece, but to anyone else, it's a bit overwhelming and doesn't stand out among other racing games.
Reactions: Lia and LittleFlame
Share:
Facebook Twitter Reddit Pinterest Tumblr WhatsApp Email Share Link
I disagree with this review in many points.

Disagree. AI is decent in the lower difficult and good in the higher difficulties, like in the ultimate difficult. Watch some videos from Tiametmarduk and aarava in youtube and you will see the AI isn't bad.

Many other racing games doesn't have basic tutorials. Despite this, the controls are well explained and the time trials mode, like in any other racing game, it's for you training and improve your driving skills. The lack of player guidance is a lie. There are driver aid, like showing the racing like and the brake points. You forget to say the track Track acclimation, Tyre management and qualify lap testing in the practice in career mode helps the player.

"Lots of content and a stunning career mode contribute to the gameplay, but some mechanics are overly complex and require a real Formula 1 racer to understand"

Completely disagree with this statement. All setups options and mechanics are very well explained. This is a simcade and having a certain complexly is a trademark of this sub racing genre (the same could be said about true racing simulators). This is not an arcade game like Need For Speed with simply mechanics and you don't need to be a "real F1 driver" to understand it. I never heard people complaining about F1 games by Codemasters for being "overly complex". I find the setup options pretty simplistic to be honest.

I believe you think Gran Turismo, Forza, Project Cars, Asetto Corsa and many other simcades or simulation racing game are "overly complex" too.

"To a Formula 1 fan, it's a masterpiece, but to anyone else, it's a bit overwhelming and doesn't stand out among other racing games."

Yes, this game was made for F1 fans and racing fans, especially the ones who likes more realistic racing games. Looks like you reviewed this game wanting something like Need for Speed, Burnout and Mario Kart. This isn't an arcade racing game and this was pretty clear since F1 2010.

Sorry to say this, but this was a bad review and you have little to none knowledge what is a simcade or a racing simulation game. This is notorious because you are criticizing the game for being "overly complex". This isn't a overly complex game. It's the same of reviewing a realistic shooter game expecting to be a Call of Duty.
Reactions: neim81094 and YuseiFD