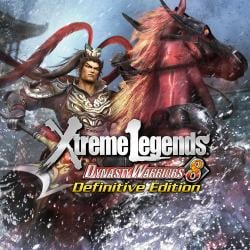 The latest Warriors game to grace the shores of the Switch, does it have the content to match its beast of a name?

Originally released in 2013, Dynasty Warriors 8 (DW8) has since been seen on more consoles than Bethesda's infamously ported Skyrim. Each release offering new content, new expansions, or simply a compilation of the two, it now finds itself in the hands of western Switch owners. Read on as we discover what makes this Xtreme port so definitive in Koei Tecmo's latest excessively long-named release.

To discuss what this titles offers as original content, I'll be comparing it to the other two games from the series I have experience with: Hyrule Warriors (HW) and Fire Emblem Warriors (FEW). With these two being until recently the only two available on the Switch, I can imagine there being a large number of people in a similar position to me having enjoyed them. How does this enjoyment translate to a more traditional series entry, and what makes this so different? Before going into that however, it's easier to start with how they're alike. 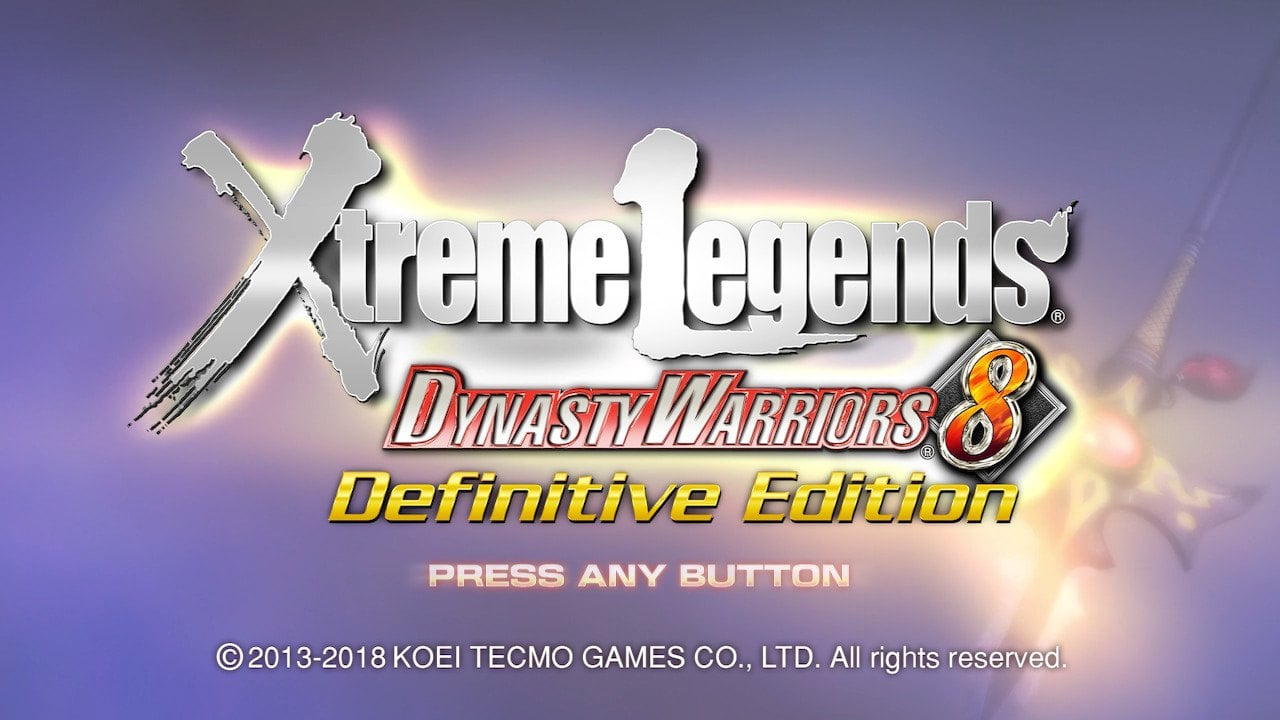 Put simply, it is a Warriors game like any before it. You hack and slash your way through hordes of enemies, completing objectives and cutting down enemy officers. Coming from either of the Nintendo versions, much of this will feel familiar, albeit with a slightly different graphical style and some differing terminology. As with HW and FEW, you have a story mode to progress through, seeing you beat a series of stages with a diverse cast of flamboyant and fun characters, as well as a unique mode to keep you hooked when you've finished. Where DW8's story mode is different is in its branching paths. While this was technically also seen in HW and FEW, the way they they're implemented here creates an overall more engaging and diverse experience. In the other titles, branching paths signified multiple events happening in tandem, with each needing to be completed before continuing. Here, they're used as alternate paths. You have your standard path to follow that you'll likely end up going down on your first playthrough, and when you've finished that, the previously-hidden bonus objectives are revealed that can alter scenarios down the line. For example, saving an officer, or convincing one to defect, ensuring a specific plan succeeds or fails; it all comes together to build something far more involved than I've seen before. Some of these objectives are interesting in that they can change how a scenario is played entirely, creating an unexpected level of replayability, especially for somebody like me who feels it necessary to beat each stage on each of the six available difficulty options. On top of this, you have not one, but five routes to play through, in addition to what ifs, bonus scenarios, previously-DLC scenarios, and the ability to replay any level as the opposing forces in Free Play. The content on offer here is both astounding and overwhelming in equal measure and has kept me hooked far better than HW or FEW ever did, despite my lack of connection with the game's cast and lore going in. Something worth mentioning as an aside is how each map is playable not only alone, but cooperatively with a friend next to you. While it isn't something I had a chance to play with, it's a great inclusion, especially for those with siblings or eager housemates. 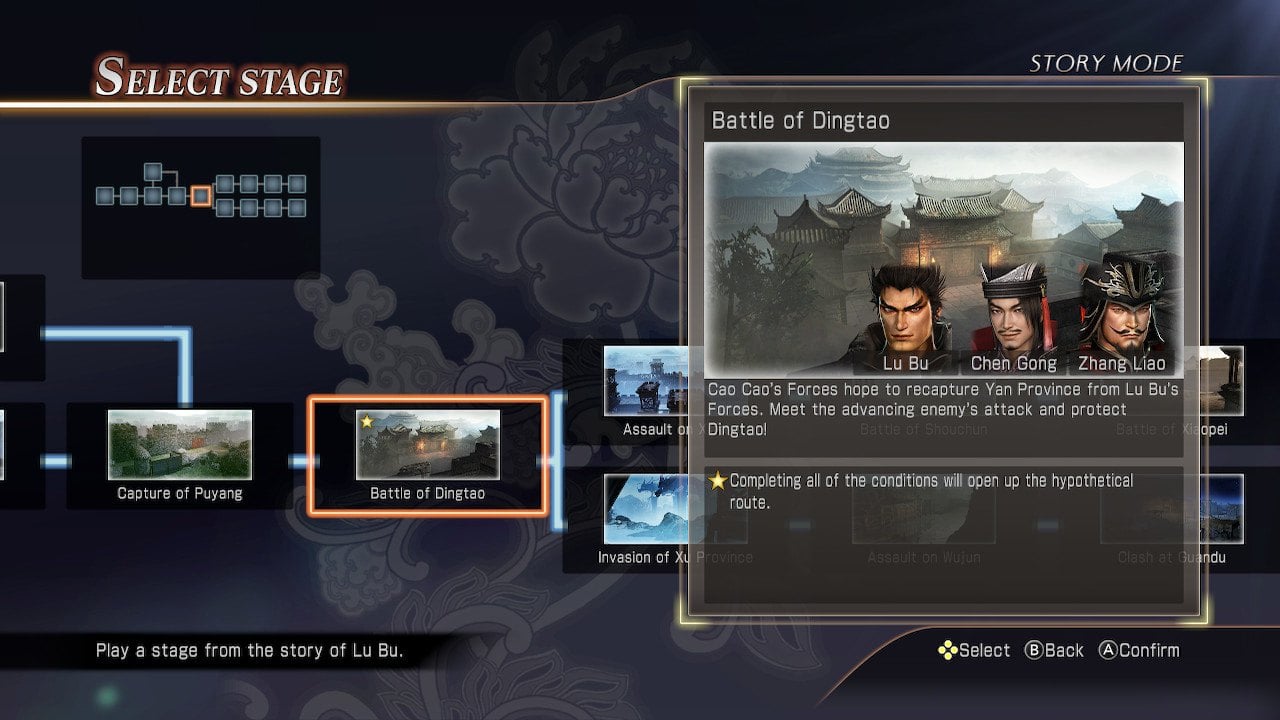 Looking at the gameplay, there are a few interesting differences to note, the most significant of which being the weapon triangle and use of horses during battle. While weapon triangles aren't particularly uncommon, the way they're used here do well in deepening what it otherwise known to be a simple and repetitive experience. When you go into battle, you can take with you two weapons to be switched out as you play, each weapon being one of Heaven, Earth, or Man affinity. Heaven beats Earth, Earth beats Man, Man beats Heaven. It's your standard rock, paper, scissors kind of action, but it goes further than just offering damage multipliers for favourable matchups. If you have an advantage, you're presented with the opportunity to perform a Storm Rush, the equivalent of a Weak Point Smash in HW. If you're at a disadvantage, you won't knock back the enemy, and leave yourself open to being knocked down yourself. Where all of this is particularly interesting to me is when playing on Normal difficulty or above. Much to my surprise, enemy officers actually seem to play cleverly. Where they're at a disadvantage, they'll switch out their weapon to either turn the table or even the playing field. It's something small that's little more than common sense, but it stands out in a game like this when it does more than simply over-level enemies for higher difficulties. The ability to bring two weapons is also goes a long way in keeping your battles fresh, with each character being able to use any of the game's arsenal with varying degrees of compatibility. With compatibility only offering a variable damage boost, it steers you towards certain weapon types without necessarily enforcing them. It was balanced well enough for me to continue using my favourite character if I wanted to with an unbelievable amount of options. The DLC weapons in particular each come with a unique charm and flair. From straight-up kicks to a totem pole that can transform into a mushroom or coconut tree, the game managed to surprise me every time I picked a new weapon. 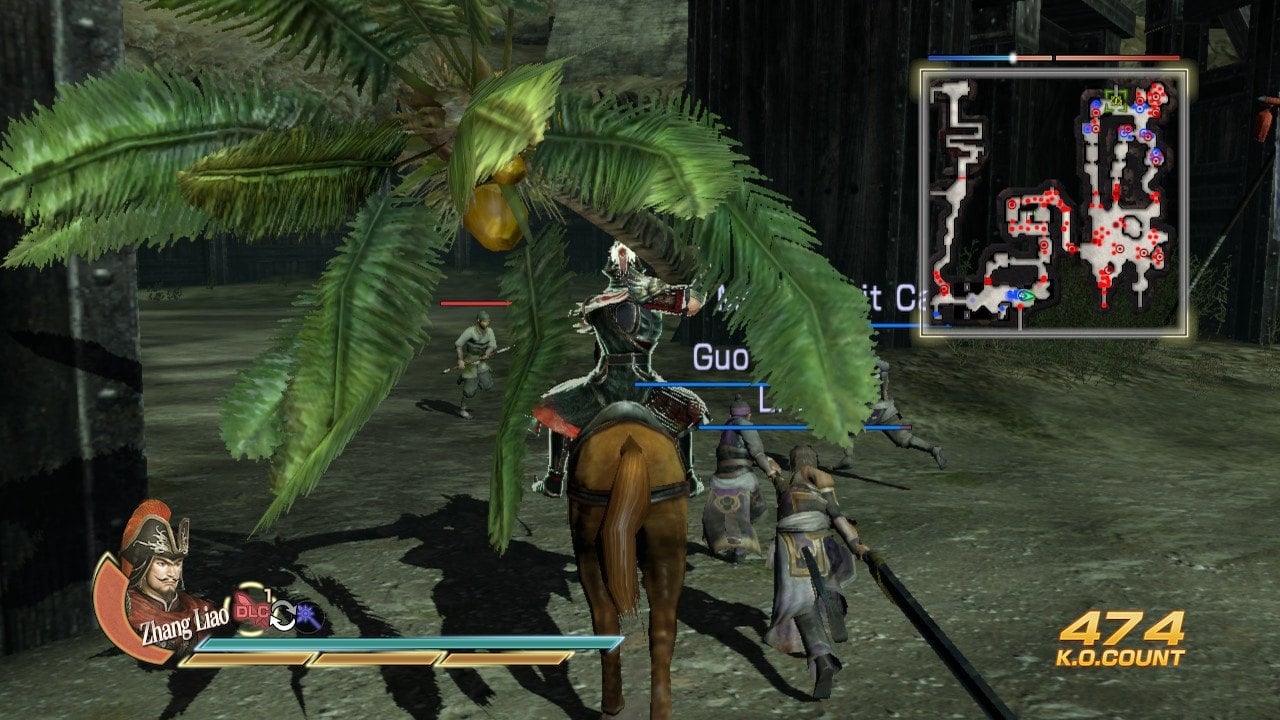 Horses might seem minor in comparison to the weapon options and matchups, but coming from HW and FEW, they're something that take a bit of time to get used to. Available to call by holding ZL at any point in-battle, they offer a faster way to get from point to point. While mounted, you have access to a few limited attacks, but the focus here is clearly in mobility. Though the idea is something I can get behind, my issue lies in the game's overall speed as a result of their inclusion. Both HW and FEW felt faster paced in regards to character mobility, each having a dash that felt equal to or faster than riding a horse does here. I can understand why this is the way it is when you consider the more realistic themes the game tries to go for (overlooking that totem pole anyway), but it's hard to look at it as anything other than making large maps longer for no good reason when you jump in for the first time. It's a similar feeling to what I felt in HW after playing so much FEW, the game feeling much slower in that case because of a skill being absent. It's not exactly a fault of the game itself, but is brought into the light if you have experience with others available.

The other significant mode the game houses is Ambition Mode. Your aim here is to build up your camp, gathering famous officers as you go, in order to win the emperor's trust in you to protect him in these troubled times. With the name of the mode, I went in expecting a mini version of what you'd usually see in the Empires expansion, which is in itself a blend of Koei Tecmo's Nobunaga's Ambition and your standard Warriors action. What I actually got was something entirely different, and not necessarily worse for it. To grow your camp, you go out and do one of three types of battle: Great, Unconventional, or Skirmish. Great Battles allow you to recruit more allies, Unconventional Battles allow you to accrue fame, and Skirmishes make it easier for you to gather materials to build up your camp. Starting with a seven minute timer, you choose which battle you want, and can continue to chain battles as long as you think you have time for it. Additional time is given for tasks such as killing 100 enemies in a map, or completing objectives in Unconventional Battles. While the core is simple, the increasing difficulty as your chain more and more battles, combined with an ever-encroaching timer all comes together to create an incredibly fun and replayable experience. Add to this the simple but satisfying sense of steady progression that comes with building up your camp and you have what surprises me to be my favourite mode out of the three games I've been discussing. 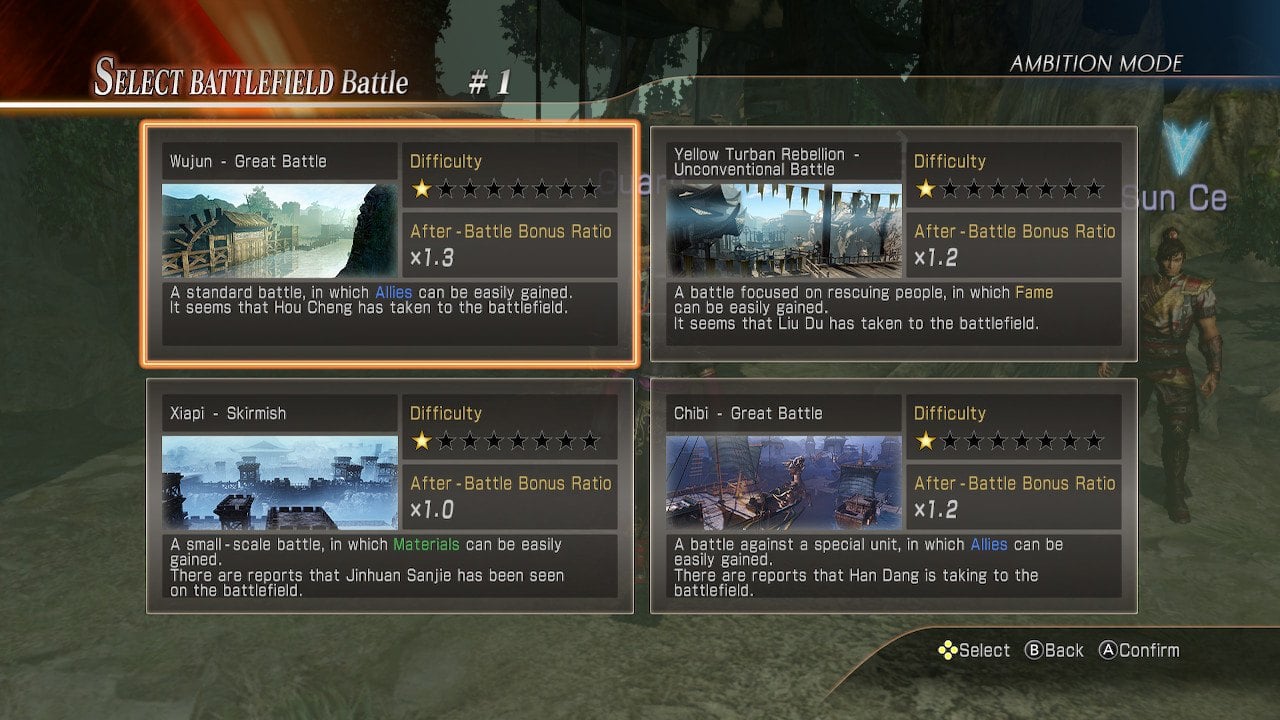 Up for a Challenge?

Challenge Mode is something I spent less time on when compared to the others. Featuring battles and objectives to be played and met using pre-specified character builds, there's a lot to like. Akin to the Arena Quests of the Monster Hunter series, you can dive straight in without having to level up any specific character, or farm for any specific sets of weapons. Everything is laid out nicely in an arcade-like way, and it's something great for the game as a whole. With five really fun courses to be played by any of the game's huge roster, it does well in extending an already feature-packed list of content. The reason I'm not as fond of it as I perhaps should be lies in how I enjoy Warriors games. My love for the series stems from the progression of building a weak character to destroyer of armies, the grind for weapons and the eventual plateau of greatness that comes with reaching the top. These arcade-style courses deprive me of my hard work in order to even the playing field to create a competitive environment for high scores. 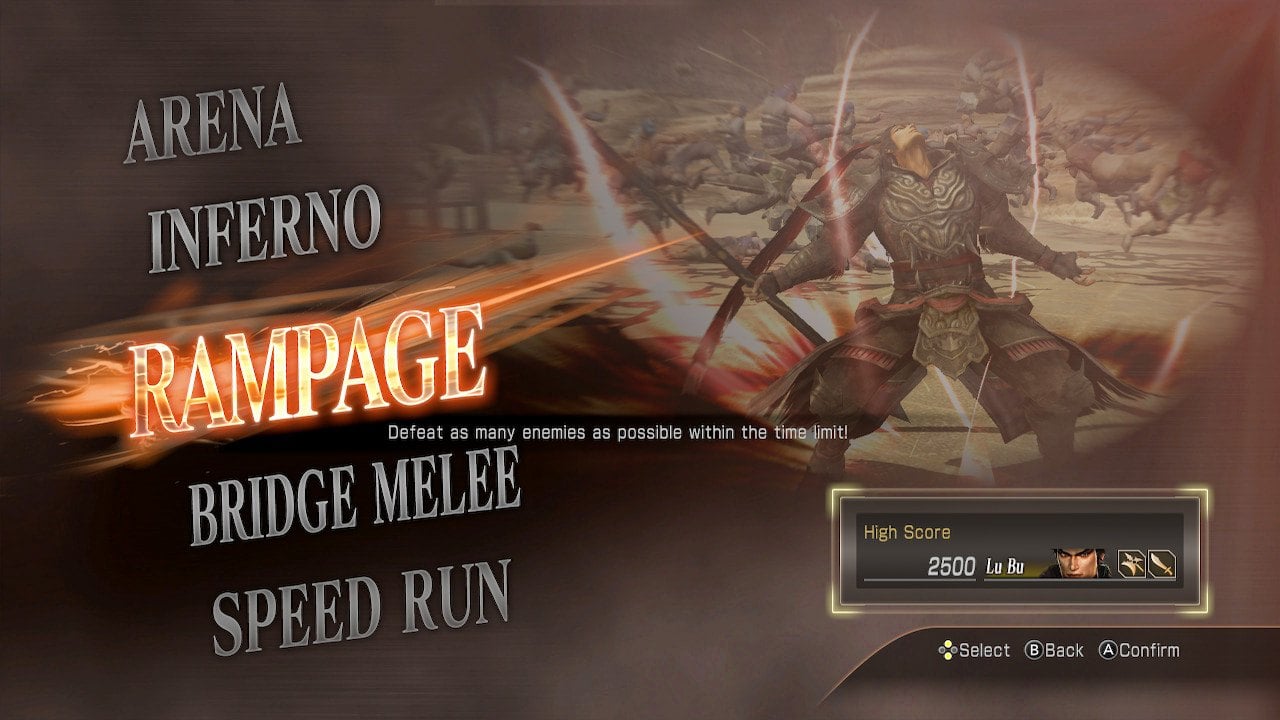 The flavours of the challenges themselves are diverse to the point of there really being something to please any player. Rampage is the closest to a vanilla Warriors experience, tasking you with defeating as many enemies as possible within a time limit. Beyond this, things start to get more interesting with challenges ranging from knocking as many enemies off a bridge as possible to running through a battlefield as quickly as you can. If there were a way I could use the non-specified character builds, even if the high score was recorded separately, I feel I'd have a lot of fun here. As it is however, it just doesn't align with my love of the game. I understand why it is how it is, and I understand a lot of people will enjoy it, but it isn't for me.

Whether this game is for you really boils down to one question: do you like Warriors games? If you get absorbed in mindlessly cutting down troves of enemies with a splash of strategy, overly flamboyant acting, and more betrayal than I care to shake a stick at, this is a game I will not hesitate to recommend. On the flipside of that, if you don't like Warriors games, I don't think this will be the one to change your mind. While this is the best Warriors game I've played to date, it is still a Warriors game, and doesn't do anything revolutionary in the way of change. It's more of the same, but better than ever. 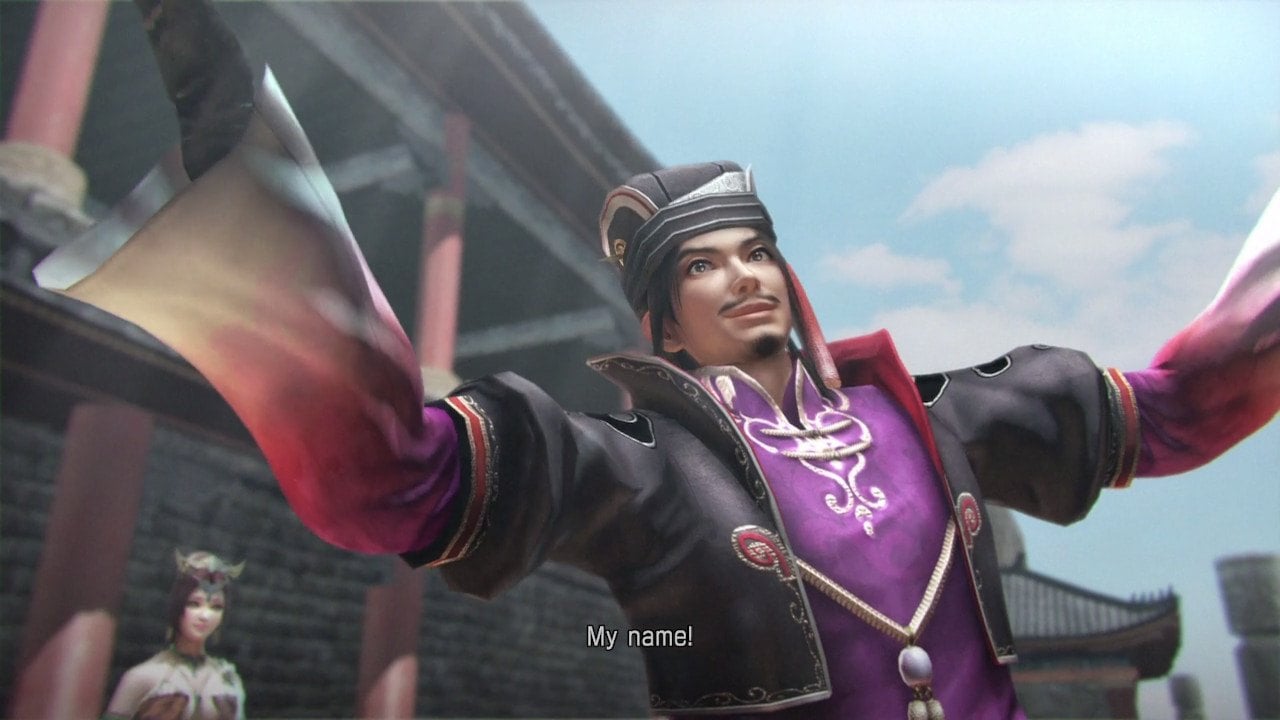