Go to download
Overview History
This contains two IPS patch files for the US and EU regions of Super Mario World: Mario Advance 2. The patch was created by rom hacker Asaki from romhacking.net and restores the original color and brightness of the SNES Mario World. The GBA port heavily brightened the graphics up, apparently for easier viewing on an original non-backlit GBA screen. However, the result was a rather washed out looking game, especially when played on newer backlit models, DSes, emulators, etc.

The majority of graphics are restored and fixed to proper colors, with the exception of some of the menus outside the main game and other very minor graphics.

You will need either a US or EU version of the Mario Advance 2 GBA rom. Apply either the US or EU patch to your respective rom using gbata or similar patching utilities (patches are NOT interchangeable and will corrupt the wrong region). 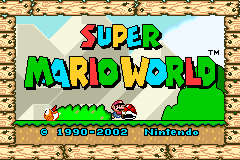