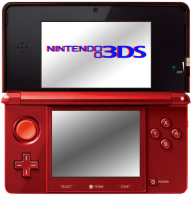 DO NOT ASK FOR LINKS TO ROMS, THIS IS YOUR ONLY WARNING!
In an abrupt turn of events, a release group by the name of LGC has apparently managed to dump the first 3DS roms. The roms dumped are the European versions of Super Monkey Ball 3D and Tom Clancy's Ghost Recon Shadow Wars. These releases come along with actual release nfo's. Both roms are 2048Mbit (or 256MB), which is smaller than the largest DS rom. LGC is not a new group, they have dumped DS and DSi roms before, so it's probable that this claim may be real. Also, the source comes form Ludibria, a popular site that posts scene release data for many systems. It remains unknown how LGC did this or what tools they used. And for now, the dumps remain unusable due to a lack of compatible flashcards. But for now, they are apparently released and use the file extension .3DS. NFO files can be found in the spoiler tag. [/p]

Thanks to Opal for the news!​
Reactions: ChibiMofo and Skyshadow101

A
Homebrew Trying to apply an anti-piracy patch to a Pokémon White ROM I dumped myself.