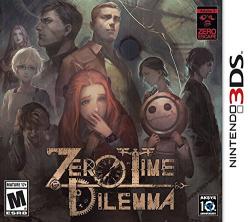 Zero Time Dilemma is the third and final entry to the puzzle/visual novel game series Zero Escape. Is this game as good as its predecessors? It's time to check it out.

The Zero Escape series started back on the Nintendo DS, with the release of 2010’s Nine Hours, Nine Persons, Nine Doors, and later got a sequel titled Virtue’s Last Reward. While both of these games were critically acclaimed and beloved by fans, neither were commercially successful, and productions on a third game were halted, leaving the two games' storyline stuck at a cliffhanger. Luckily, fans banded together to create a campaign for Zero Escape called Operation Bluebird. Enough people rallied behind it, which successfully lead to series writer and director Kotaro Uchikoshi creating his plans for a third and final game, which would wrap up the Zero Escape story and resolve loose ends. That game is Zero Time Dilemma.

While Zero Time Dilemma acts as a midquel of sorts between 999 and Virtue’s Last Reward, it is imperative that players go through the series by release date order. If you don’t, you’ll miss all kinds of references, and the main twists in the story will have little-to-no impact on you, as they’re tightly bound to events in previous entries.

Returning Zero Escape fans will know that the game takes place at the Mars Test Site, where the events that lead up to Virtue’s Last Reward are about to fall into place. A group of nine volunteers have signed up for the experimental Mars Colony project, only for it to be hijacked by a mysterious person named Zero. He then forces those nine participants to play the Decision Game, where they’re split into teams of threes and have to endure tricky puzzles and make deadly choices in order to escape. Not only that, but freedom is only possible if six of them die. This is the main element to Zero Time Dilemma. Every “right” or “wrong” decision brings you to a different universe with different consequences as a result of your actions. You will be presented with many choices throughout the game, leading you to branching paths and timelines depending on the outcome of each decision. For example, the very first choice of the game is a coin flip. Zero promises that he will release everyone, and the Decision Game will not have to be played, so long as they win the coin toss. I chose blue, which was the correct answer, and the credits immediately rolled. The end! But what if I had gotten it wrong, quipped a character in the background. I replayed the cutscene, made my new choice, and the game continued on a new path entirely. In order to view all of the possible endings, you'll need to replay segments to fill out the game's flowchart and see every possible option.

It’s a very interesting way of telling a story, as all the timelines eventually offer something significant to the overarching plot. Seeing how each individual choice impacts the story adds a lot of suspense, and will keep players on the edge of their seats all the way until the True Ending. Writer Kotaro Uchikoshi knows just how to lure players into thinking things are going well, and then he abruptly turns the tables with a crazy plot-twist, and then suddenly everyone's dead and it's a game over. It's all incredibly entertaining. 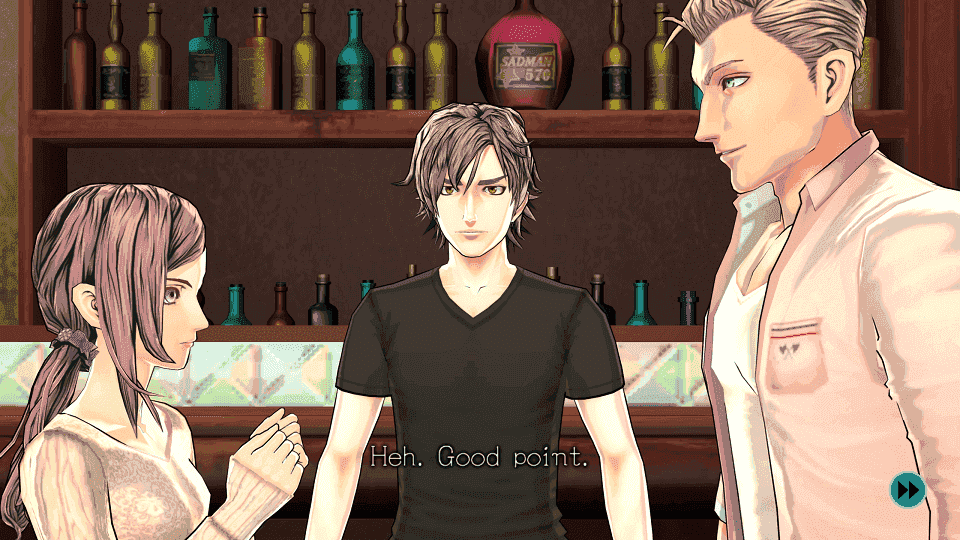 There are also the previously mentioned nine characters, each split across three different teams. There’s C-Team, composed of 999’s Junpei and Akane, as well as Carlos, a brave and loyal firefighter. D-Team has Sigma and Phi from Virtue’s Last Reward, and Diana, a shy, kind-hearted nurse. Finally, there’s Q-Team, which has all new characters; Eric, Mira, and the mysterious Q. The interactions between all of these characters are well-written for the most part, and there’s tons of amusing dialogue to be found within the puzzle rooms. Since the crux of the Decision Game is that a majority of your choices will lead to character deaths, there are a lot of moments where the game tries to get you to empathize with the cast. And generally, it’s successful at doing so, especially in D-Teams’s case. On the other hand, situations with Team-Q mostly came off as grating and annoying. They lack the build up of character development that the other teams got, instead deciding to drop chunks of backstory in at a time. This leads to a majority of their interactions feeling rushed, and like their only involvement in the plot is to generate needless drama and shock value, at least until around the end of the game.

After the initial coin toss scene, you’re allowed to freely choose chapters from the main menu. None of these “memory fragments” specify what chronological order they happen; you’ll only know where they fit in the timeline after you’ve completed it. Once you finish a puzzle room and view the following cutscene, characters are injected with a drug that causes them to forget everything that just happened, allowing for each fragment to occur seamlessly within the game's flowchart of events. 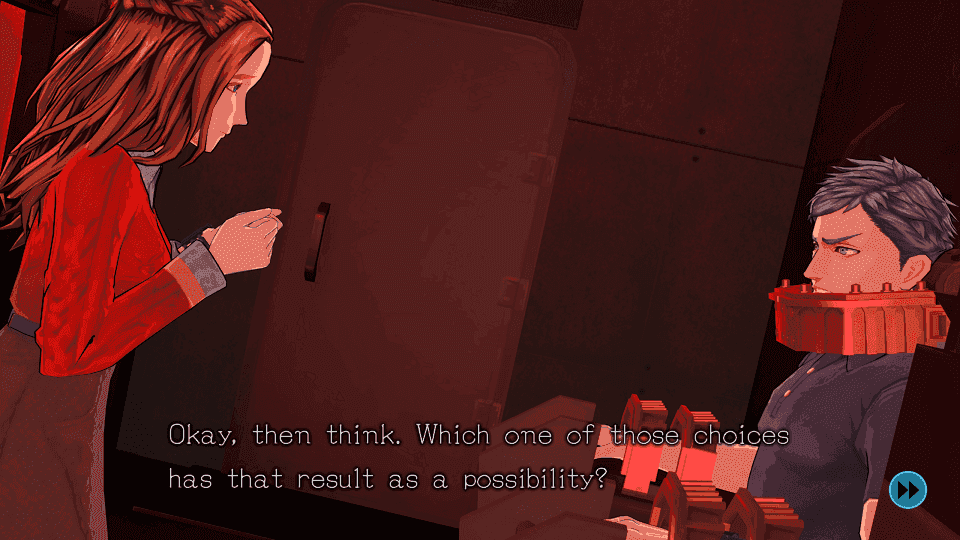 Zero Time Dilemma is primarily a visual novel, that has interspersed puzzle sections in order to break up the story segments. This time, instead of using a 2D perspective, all of the cutscenes are fully-animated with 3D models, very much in the same vein as Telltale’s adventure games. These cutscenes look fine for the most part, but the models are animated very stiffly, and dramatic facial expressions have a tendency of looking awkward. There were many times throughout the game where character deaths should have been horrifying or tense, but I could only laugh at how ridiculously bad the faces looked. After watching the first few instances of the game's low production values, it's easy to adjust to how it looks. And while things can look a little cheap while in motion, using 3D models instead of static 2D sprites really helps convey the story and emotions of characters.

The gameplay to Zero Time Dilemma consists purely of point-and-click rooms, where you must solve puzzles in order to escape. These puzzles range from fun brain teasers, to boring, repetitive clicking sessions. The escape rooms themselves are uniquely designed and have creative themes. The puzzles, however, soon become an irksome blockade to the story, instead of being something to bridge the gap between intense story-heavy sections. The better puzzles put your mind to the test, and require you to carefully think and calculate how to solve problems, be it unscrambling words, algebraic equations, or trying to fit shapes within a set amount of space. You’ll most likely need a pen and paper to figure them out. More annoying puzzles require clicking the same objects a multitude of times, like in one room, where you must click 12 small cards off of the ground, individually. How entertaining. Not to mention, this really showcases how bad the 3DS touchscreen controls are here. Using the stylus to move the camera or write down notes feels unresponsive and sluggish. There’s a frequent issue with having to click the same thing multiple times, just to have the game register that you clicked that one perfect pixel in order to advance the puzzle.

Furthermore, the 3DS version does not support stereoscopic 3D at all. It’s an understandable compromise, seeing as how graphically demanding the game is for the portable hardware. The Playstation Vita version runs much more smoothly, and is the better handheld version. The PC port is very basic, offering simple anti aliasing and resolution (up to 1440p) options. All versions of the game have either an english and japanese voiceover, and both voice casts’ performances are acceptable. The english voice track has some odd audio mixing issues, so you might want to turn down the music and SFX if you can’t hear what’s being said. Zero Escape series composer Shinji Hosoe makes a return, and creates some really mood-setting pieces for the game’s soundtrack. The three teams each get unique themes, and C-Team and D-Team get some nice 999 and VLR remixes, respectively. 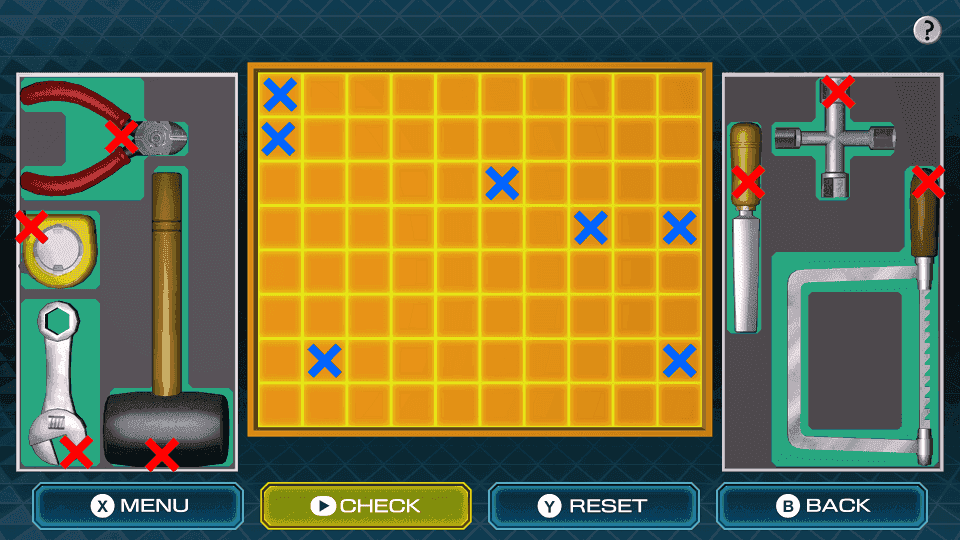 Perhaps the worst part about Zero Time Dilemma is how it resolves the plot point of who the mysterious mastermind behind the events of both this game, and Virtue’s Last Reward, is. The entire ending feels rushed, either due to budget concerns, or the inability to fit all of the pieces of the story together in a cohesive manner. This makes it the worst entry in the Zero Escape series, but by no means a bad game. The story leading up to the big ending reveal is still great, with plenty of choices that keep players engaged the entire time. If you're a fan of the series, you undoubtedly have played, or will play this. And if you're looking to get into the Zero Escape games, all three entries are well worth your time.