I am way out of my comfort zone with an RTS game, the last ones I really played were on N64 with Starcraft64 or PS1 with Command & Conquer!
War Party is a real-time strategy game which promises epic battles and taming of dinosaurs. Gather resources, build an army and slay the enemy!

They say slow and steady wins the race, but when has that ever been fun? A well paced battle is always fun and exciting, but drawn out collecting and leveling up or "grinding" is just a chore and I don't play games to do chores, I play games to procrastinate from doing chores. Amiright?

War Party bursts onto the switch with its over the top and marauding characters including zombies and dinosaurs, which if I'm honest was the main draw to this game. Dino-freaking-saurs!! There simply aren't enough dinosaurs in games these days, and with a slew of throwaway games featuring the obligatory zombie and "battle royal" modes, I was pretty stoked for some explorative dinosaur action, but how far could these simple feature take the game? It's a mixed bag to be honest.

Cannon fodder was always one of my favorite games on the SNES. It was a simpler time back then with no need to forage for herbs and mud and sticks, to craft tools, to dig for ore, to craft bricks, to build a refinery and cast those metals, then craft guns and ammunition and then go to battle, it was just plain strategy and fight, it wasn't turn based fighting (yay) and it was enthralling and thrilling.

The premise of a non-turn-based game like cannon fodder, but with prehistoric monsters, was a huge draw for me. I knew it wouldn't be cannon fodder, I know things have moved on, times had changed and I had better crawl out from under my N64 shaped rock and get with the program, but when I first encountered the AI a few times in War Party I immediately thought to myself: "this is repetitive and tired". All the excitement I had to play this game was sucked right out of me pretty much amidst the first mission, and no amount of dinosaur taming was going to balance this out to a fun experience.

The factions you can control really vary: from the typical human Wildlanders, the mystical Vithara's and the brutish zombie loving Necromas. Each have their pros and cons, and each have benefits to achieving certain tasks better than the other. In real terms it's RTS top-trumps, and the variety makes each faction feel incredibly different which is a true credit to the games designers. Each faction has 30+ upgrades across three tiers, and the little sigils that you get for each one are a nice permanent on-screen reminder of your prowess and choices.

Each maps cloaked appearance leads you to want to see whats around each corner, and flesh out the entire map so you know what resources are available and where to send people to get them. The adventure of finding the upgrade shrines and thrill of bumping into a carnivorous beast and deciding to smash it to smithereens for food, or better, taming it to ride majestically into the next battle, is initially very compelling indeed. 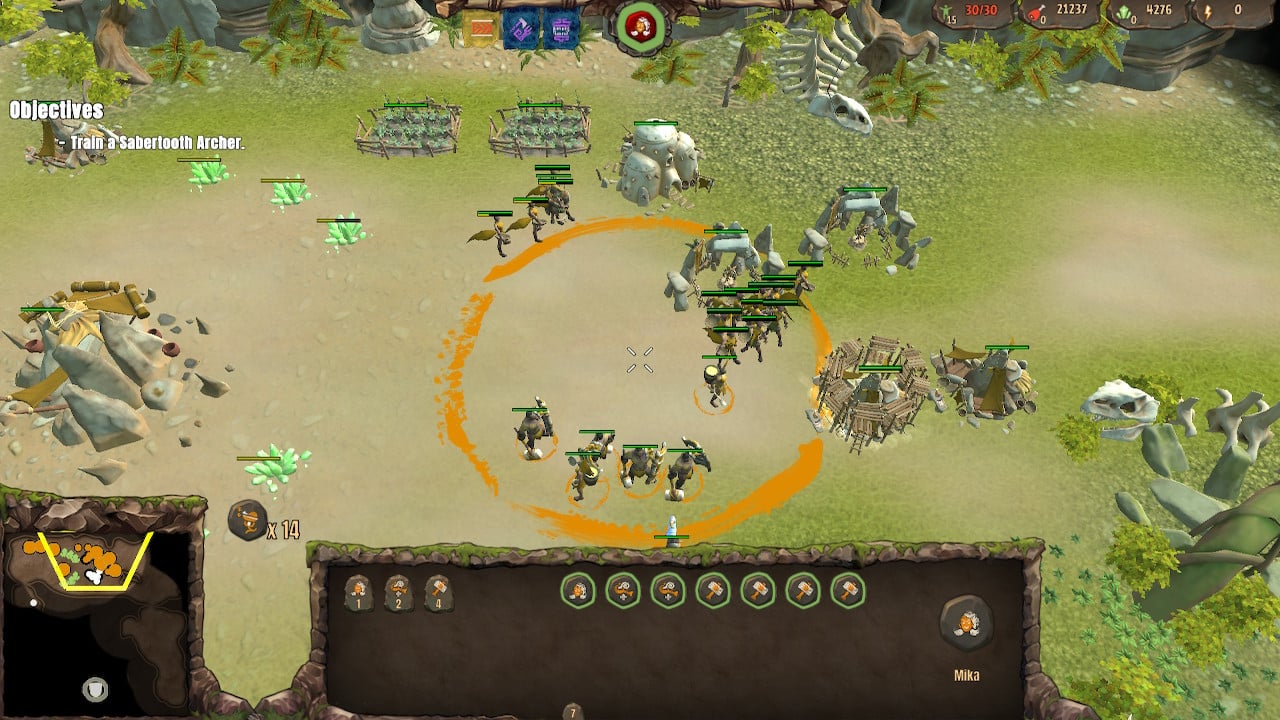 The initial outset is quite intriguing with the G'on discovering magical powers and artifacts, and even them creating and controlling dinosaurs, before eventually splitting into factions and fighting each other for the power. The story telling is compelling and intriguing, but beyond that the game feels cheap. No epic opening cut scene action, just a simple image moving about from one section to another. Although it's slightly clever how its reminiscent of a cave painting, it just feels like yet another cheaply ported mobile game to play but on a trendsetting smash hit console, perhaps I expected too much in seeing some action instead of a bunch of stills. IDK.

Understandably what they have tried to achieve is fantastic. From single units, to writhing battalions and hordes of beasts and larger than life characters, this feels like a decent RTS at its core, but graphically it comes at the cost of bland texturing and notable absence of shadows and light play. Nothing pops out at you and hits you in the eye to make you gasp in awe or feel like this game is in anyway lovingly crafted and finely polished. It's a real shame. Seriously, just, seriously: check out the screenshots above and below (they were taken in docked mode FWIW).

The mini-map and HUD elements are minuscule in portable mode, and the up close the textures were just plain gone, with what can only be described as bare naked models begin set to default pallet colors, a bare-bones inner shadow, and zero texturing used in most instances. Environmental textures that do exist are muddy and look like they have been put through a washing machine about a thousand times. Character skins and dinosaur models look decent. I know the switch is not the most graphically powerful beast, but the visuals look tired, cut down and lackluster at best. 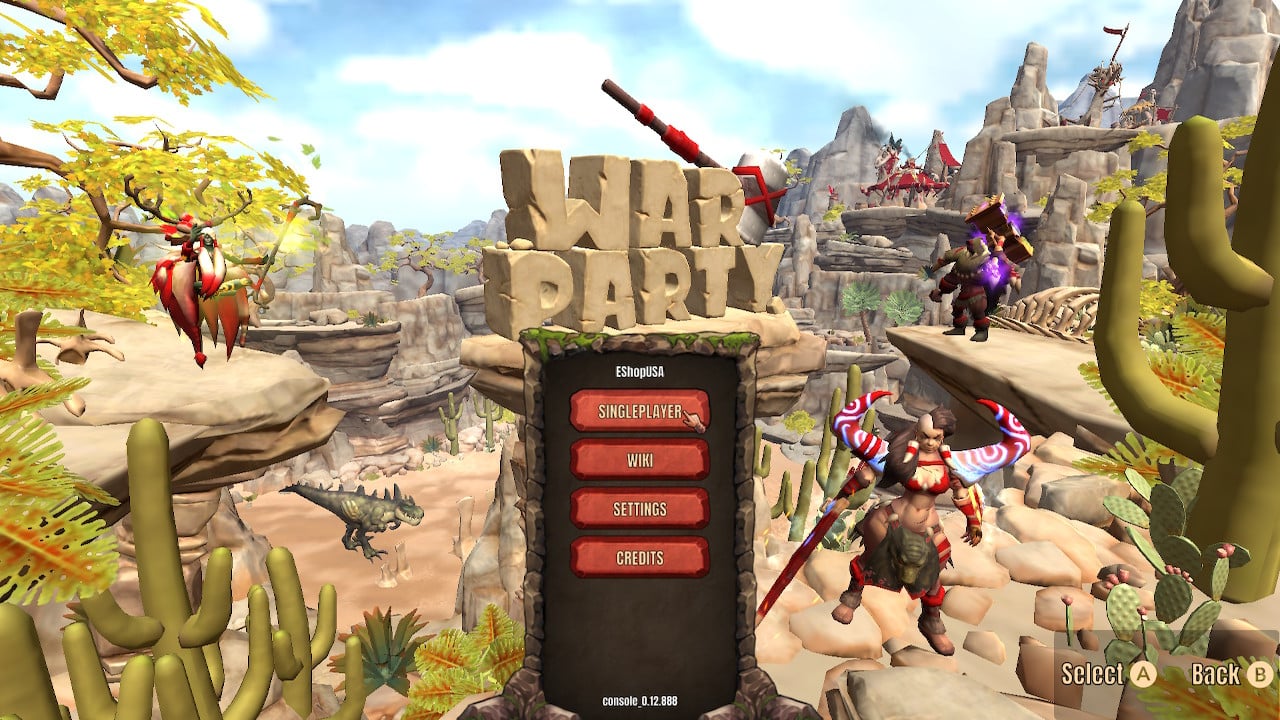 The tutorial segment is a must if you want to get to grips with the controls and etch them in to your mind and muscle memory, while it's very badly constructed and boring it can be extremely useful.

Overall the controls felt clunky and not very well implemented. basics like move and attack are laid out superbly and it's very easy to navigate, however the rest of the controls felt a little bit shaded away into the recesses for you to have to figure out. In all honesty even the pause menu (specifically the audio options: as I like to know that I can mute in-game music if I want) was tough to control, with the sheer inability to increase or decrease the volume sliders with the joy-cons (it worked with left and right on the right stick of my pro controller eventually), I mean: IS IT JUST ME?! ... I understand selecting units is finicky, and that delegation and micromanaging are part and parcel of the genre, I can handle that. But when things don't work, it's not enjoyable.

What I also wasn't ready for was finding myself struggling to remember various combinations of buttons, and that ZL would bring up one set of options by first selecting a building or a character, but that pressing the exact same button without clicking on a unit first, would bring up an entirely different set of options.This may well actually be a main-stay of the RTS genre, but as a newcomer it just felt badly done and not very intuitive at all.

The use of the words "Press the given button", by the lead characters, also made me wince each and every time it was mentioned, as it wasn't specific and meant I had to avert my eyes from the task at hand to squintily read which exact button it was I had to scramble for this time round. My vision is 20:20 by the way, I had an eye test recently, the HUD elements are just far too small. 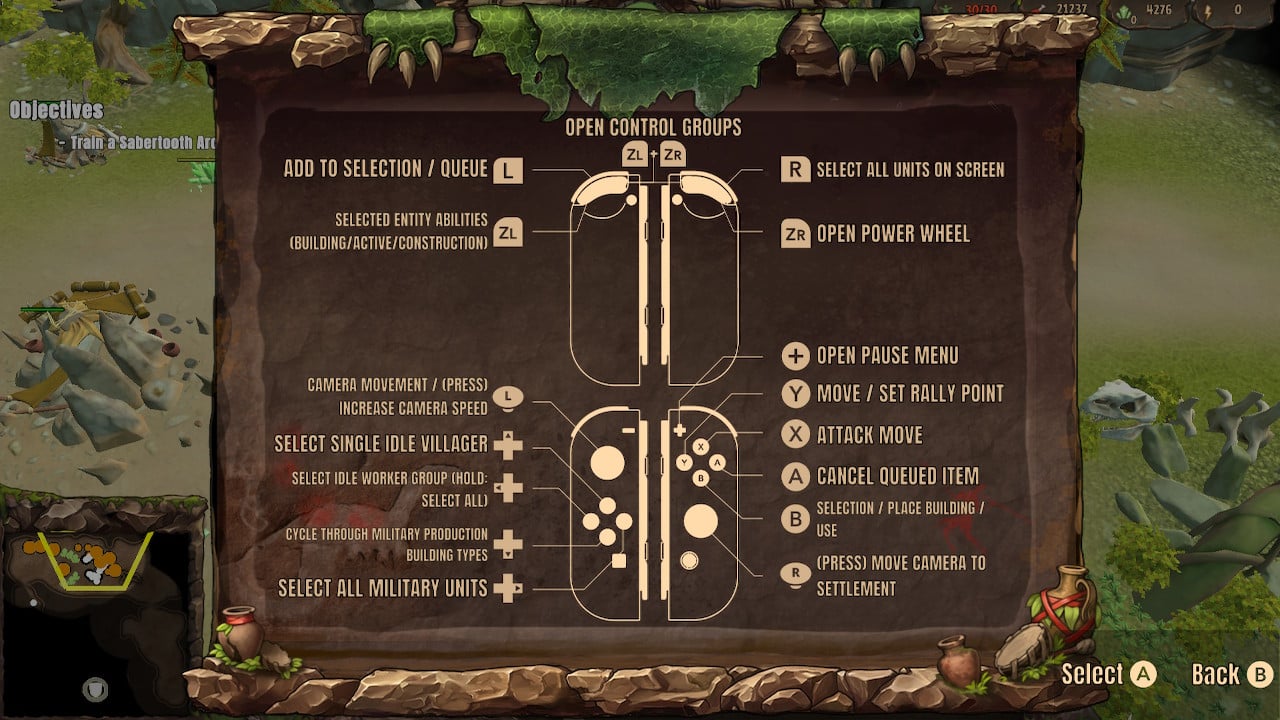 Unfortunately this game really failed to deliver for me, and I was left feeling disappointed and bored. I was frustrated trying to do, well, everything. If it weren't for the abhorrent amount of grinding you have to do to complete each task the game would be relatively short, with just a handful of chapters, though it does have the 3 factions and a 5-point difficulty selector ranging from very easy to very hard. It had its highs and lows with those tiny endorphin boosts that come with the "OMG a new dinosaur" and "W00t an new upgrade tree" moments, but they were far out weighed by tiresome and uninspired game-play. Yeah it has other modes like survival and skirmish with AI, but It's so repetitive, linear and limited it just doesn't hold up as a game worthy of sitting in your collection, especially with the switch's expansive library heralding some supremely top notch games these days.