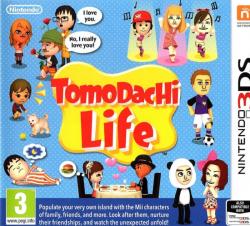 Tomodachi Life is a basic life simulation game for people who want something simpler than Animal Crossing: New Leaf. Let's jump in!

When you open the game you will see an overview of the island. When you start the game for the first time, you can name your island and make a mii of yourself. The game starts with you feeding your Mii and then introducing another Mii to your island for your Mii to be friends with. It's fun at the start and as your progress with the game's "story" (as it being a life simulation game, the story is as you make it), you will unlock more shops and eventually two Miis will get married. These Miis will eventually have a kid, this kid will take a few days to grow up. After that you can introduce your new child Mii, a mixture of the parent Miis, very simple representation of genetics and mutation, if you have less than the max of 100 Miis in your island to the island as a Mii or as a traveler going around other islands via StreetPass and coming back to your island with cool new items, clothes and food! However the game starts to get boring after you've seen everything, which is all the dialogues, the minigames, reached 100 Miis, got Miis married, traveled to different islands and got tons of StreetPass and SpotPass stuff. After a certain point, it becomes boring to the point of not being able to play the game. You leave it out and the island falls into disrepair and then you see it a few months or years later and boot it up to see all your Miis starved and sad and play it until it gets boring again or until you reset your save.
Verdict
ignare likes this.
Like this review