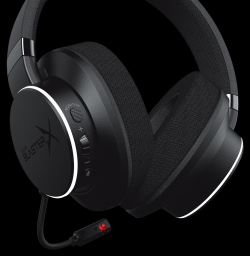 Upon opening up your pair of H6’s, you’ll find the headset itself (of course), the detachable mic, a 2m/6.5ft standard micro USB cable and a 1.5m/5ft 3.5mm cable. The headset itself has removable earpads made with memory foam and a breathable mesh fabric. Around each earcup you’ll find the RGB lighting, which displays red as default and can be customized using the Sound Blaster Connect software. On the left earcup, you’ll find the controls for the headset which include an EQ button to swap between 3 different audio profiles, the volume slider, a mic mute button, the micro USB and 3.5mm ports, the detachable mic port, and the Ambient Monitoring button, and you’ll also find two small built-in microphones on both earcups (which I’ll talk about in a moment). The detachable mic itself uses a noise-reducing unidirectional ClearComms condenser microphone, and features a helpful little red LED at the end which will tell you when you’re muted and when you’re not. Sound quality wise, the Sound BlasterX H6s are excellent. There are no default overbearing frequencies like some gaming headsets like to use, and the 3 pre-programmed EQ profiles included on the headset (for game, music, and movies) are all fairly well designed. The 7.1 surround sound works really well over USB (though via 3.5mm it’s a little iffy), and the detached mic quality sounds excellent compared to some other $80 headsets I’ve used in the past, although I've been told is it a bit quieter than you'd expect. 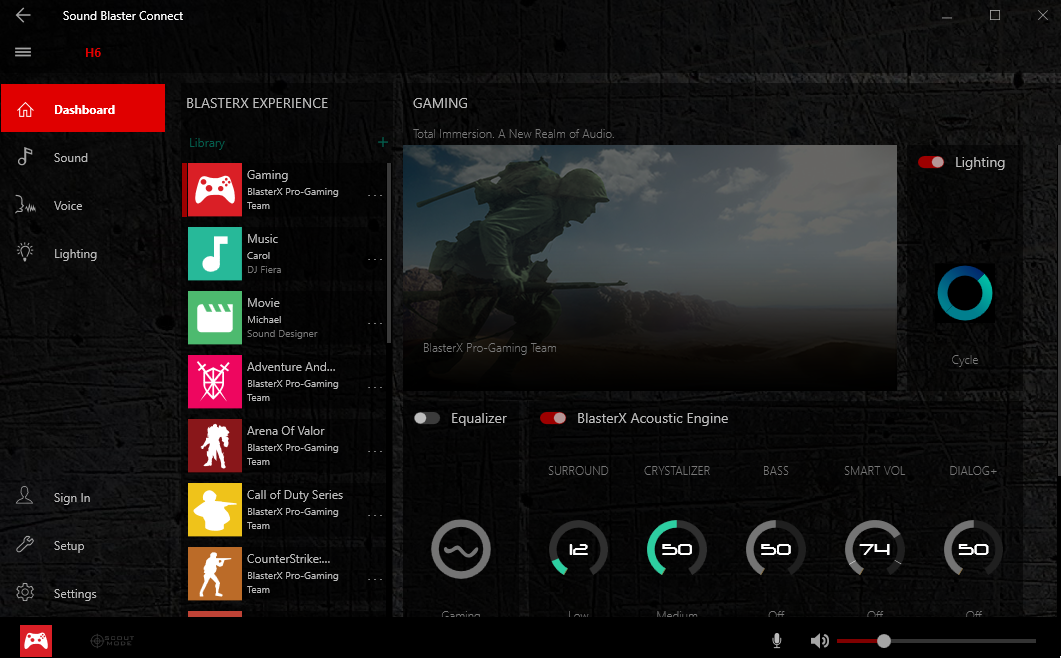 You can use the H6 headset over USB, which can be used with PC, PS4, and the Switch, or via the included 4 pole 3.5mm cable which is used with the Xbox One and mobile devices...although with some limitations. Over USB, you get access to all the controls on the left earcup, and you can use the Sound Blaster Connect software to manage various settings on your headset. You can edit EQ profiles, change the effects on your RGBs, and boost additional settings using the “BlasterX Acoustic Engine”. You can adjust the intensity of the surround sound, boost the lower frequencies for heavier bass, “crystalize” music to “sound as good as the artist originally intended”, normalize audio for improperly/poorly mixed video, and boost the dialog in otherwise quiet music/video. There's also the "Scout Mode", which is supposed to "help you hear beyond what you see such as footsteps, speech, and weapon handling acoustic characteristics". While enabled, I honestly couldn't tell much difference, so I'm not entirely sure how well this actually works, but hey it's a thing! Unfortunately, one of the biggest downfalls here, is that none of these settings are synced to the headset itself, you must run the software in order to use any of these features. Your RGB profile won’t save, your EQ profiles can’t be updated, and none of the extra Acoustic Engine features can be used without having to have this software running. While it’s not the biggest resource hog (it eats up about 200mb of memory while running), it’s still a bit disappointing to see you can’t keep these settings across multiple devices.

But that’s while using the USB connection, what about 3.5mm? Unfortunately, none of the above features are available using 3.5mm. While 7.1 Surround Sound is available, it uses some kind of generic sound profile that doesn't really sound as good as the Surround setting you can enable Sound Blaster Connect. And, because the controls aren’t in-line, you get no volume slider, no mute button, no EQ profiles, and no RGB effects over 3.5mm, nor can you use 3.5mm and the micro USB connectors at the same time. Some of these are understandable, since 3.5mm can’t push that much power to the headset for RGBs and fancy EQ settings, but it would’ve been nice to see an in-line adapter for the H6 especially when it’s available for all the other H series Sound BlasterX headsets. I also had some issues using the detachable mic when using 3.5mm on PC: instead of recording the excellent sounding audio from the detachable mic, it would record audio using the built-in microphone on the left earcup. After some fiddling, and even using a Y splitter cable, I simply could not get the detachable mic to work at all. Whether this is intended or a bug, I’m not quite sure, but either way it’s rather disappointing to see USB is your only viable option for PC and mobile devices. Unfortunately, I’m unable to currently test the headset on the Xbox One to see if this is also true for the the Xbox One.

But then, what are those two microphones on the earcups for anyways? Well, that is for Ambient Monitoring, one of the more neat but ultimately useless features on the H6. The Ambient Monitoring feature uses those two built-in microphones to listen to your physical surroundings while you’re gaming/listening to media. When you hit the Ambient Monitoring button, the headset will swap from your device audio, to the audio from those microphones, which allows you to hear your surroundings without having to remove your headset! This sound like a neat idea in theory, something that could be useful if you’re expecting someone at the door or if you want to check on your sleeping baby while you get some gaming in...but, in practice, it needs a little work. Firstly, the volume of the two microphones are woefully low, if you want to hear anything that’s being output you’ll have to crank the volume to at least 70-80%. Forget to put it back to normal volume? ENJOY YOUR VERY LOUD MEDIA NOW. Secondly, it’s not really that useful in the first place. While the earpads are quite form fitting, and the headband conforms quite well to your head, the headset doesn’t really cancel out that much noise that you'd need a feature like this anyways. If you need to hear something outside of your game, you can just as easily turn the headset down and hear about as well as you would with the built-in mics. If you could combine the sources of the built-in mics and the device audio, and adjust the built-in mics independently (like, say, from a dedicated piece of software?), it might be worth using, but as it stands it's really just a fancy feature with little use-case.

The Sound BlasterX H6 is an excellent mid-range headset for anyone looking for great sound and a decent quality microphone...so long as you use it over USB, and avoid using the rather lackluster 3.5mm jack.
Reactions: Psionic Roshambo, Issac and Chary
Share:
Facebook Twitter Reddit Pinterest Tumblr WhatsApp Email Share Link
Oh, I definitely thought the monitoring function would be a mix between the audio input and the surrounding, making them into virtual open backed headphones.

Issac said:
Oh, I definitely thought the monitoring function would be a mix between the audio input and the surrounding, making them into virtual open backed headphones.
Click to expand...

So did I, even reading some of the things on Creatives site made it sound that way. But, unless some firmware change or glitch or something is happening, it only swaps between the two, doesn't do both at once.

But then even if it did mix them, it still wouldn't be that useful since you definitely wouldn't hear anything over the sound of your game or music or whatever it's that quiet. Kind of a shame, really.

Tom Bombadildo said:
So did I, even reading some of the things on Creatives site made it sound that way. But, unless some firmware change or glitch or something is happening, it only swaps between the two, doesn't do both at once.

But then even if it did mix them, it still wouldn't be that useful since you definitely wouldn't hear anything over the sound of your game or music or whatever it's that quiet. Kind of a shame, really.
Click to expand...

It depends on if it's amplified in the software though I'd assume... Maybe it's something that an update might solve?