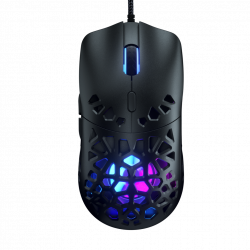 Are you looking for a seamless blend of speed and style in your gaming mouse, as well as a cure for your sweaty palms when gaming? Then the topic of today’s review, the Zephyr Pro gaming mouse, may be what you’re looking for!

It’s been a hot minute since we talked about holey mice here on GBAtemp. In fact, taking a look through the review center, it looks like the last swiss cheese mouse we took a look at was my very own review of the HyperX Pulsefire Haste back in November of last year. There’s an undoubted charm, in my mind, to these ultra lightweight options and the fine tuned, natural control you can take once you get used to one of these. So when the Marsback Zephyr Pro came across my inbox, offering one of these lightweight holey mice with a miniature fan shoved inside it, I was beyond interested. How does this slightly gimmicky mouse hold up in practice? Let’s start where we typically do in these hardware reviews; tech specs. 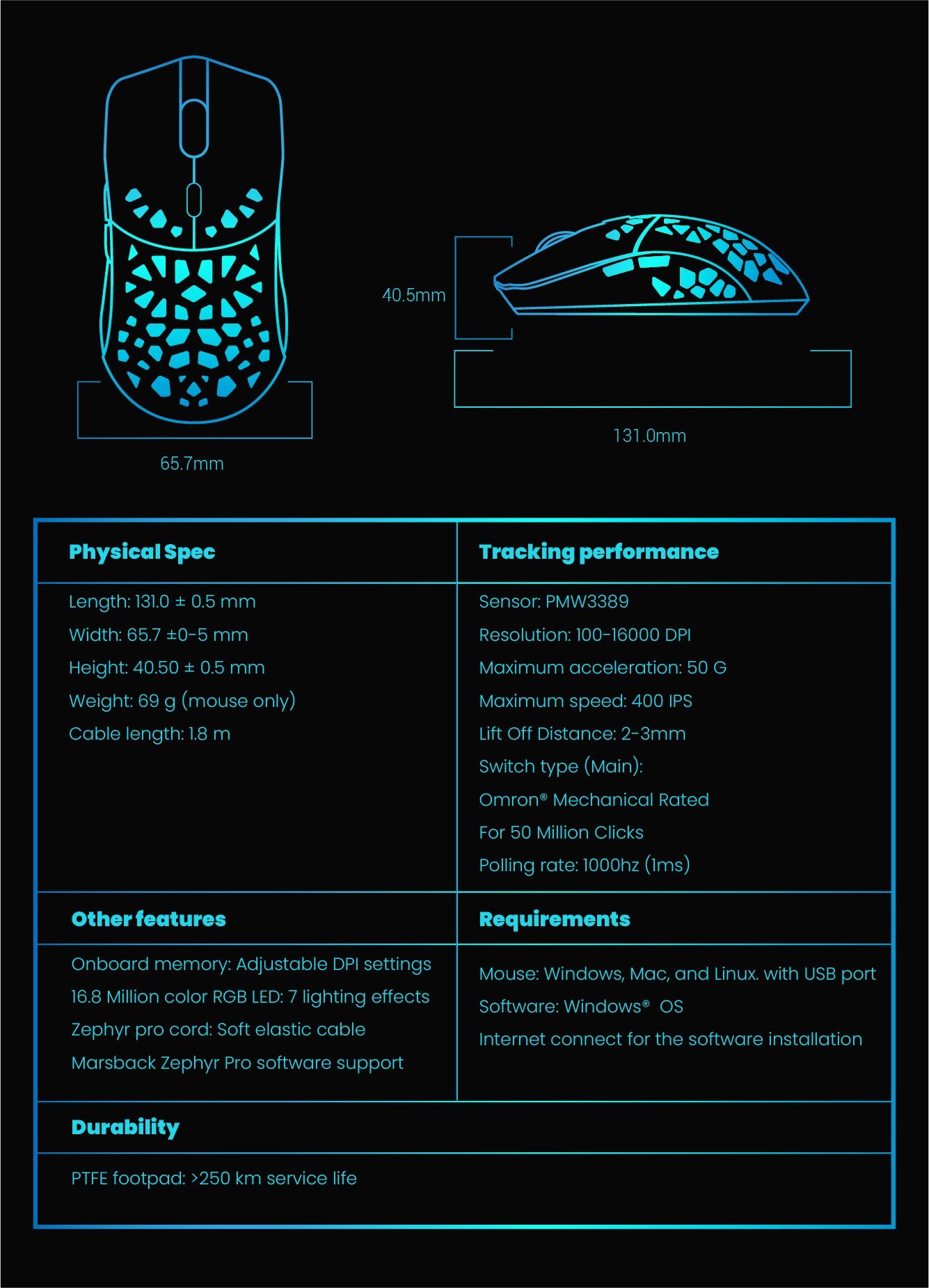 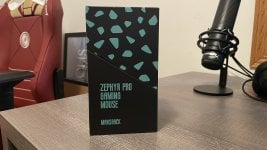 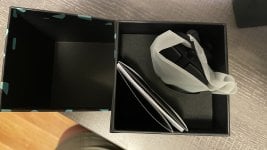 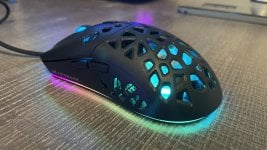 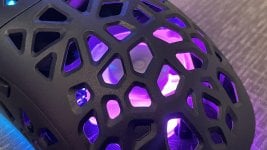 Taking the mouse out of the interesting packaging, one of the first things I noticed is the build quality. Sometimes when it comes to these Swiss cheese mice, I always fear that the hole filled nature can lead to lower build quality. Luckily the Zephyr Pro bucked those fears immediately, as those fears were pushed aside the second I picked up the Zephyr pro; the body is made from a sturdy, thick matte plastic that doesn’t give or creak at all when putting pressure on the mouse in order to test the durability, let alone when actually using the thing as one would for daily work.  From a design standpoint, the entire thing looks really sleek; the matte black gives a professional, minimalist color scheme to the mouse, which mixes well with the built in RGBs that shine through the scroll wheel, built in fan, and along the bottom of the mouse. The holes of the mouse also create a really neat, net-like design pattern that keeps it from looking too generic or basic. Don’t get me wrong, it’s not as if this is some groundbreaking design, but it at least adds a bit of extra flare that looks good with the rest of my setup.

Jumping right into the features, the built-in fan is definitely the feature that got me interested in this mouse to begin with. I’ve seen a few gaming mice with a fan included before, but it’s still a rare enough addition to feel like a pretty unique feature, in my mind. Manufacturer Marsback specifically advertises the Zephyr Pro’s fan as being a quieter, less obtrusive inclusion than the one on their original Zephyr model, which is no longer available to purchase through their site. Offering “less buzzing vibration and higher revolution (though offering no information on just how fast this fan moves),” and producing only 30 decibels of sound, I have to admit that I honestly forget that there’s a fan included a good amount of the time. It’s quiet and super lightweight, adding a negligible amount of extra weight to the mouse compared to my fan-less honeycomb mouse and producing next to no noise, certainly not enough to overpower the music I usually play when writing, the sounds of the game I’m playing, or even the hum of my PC in action. This also works against the fan, however, as a natural result of this is that it’s not a particularly powerful one, and honestly makes little difference when gaming. I won’t lie, it was a bit neat at first when I started using this over my fan-less mouse, but after a good amount of time using this mouse daily, I just hardly even register that the fan is running anymore because it’s become such second nature to me. That said, it definitely works as advertised, and I have noticed a change in comfort when using this for gaming… not a life changing amount like the advertising may want you to believe, but a change nonetheless. 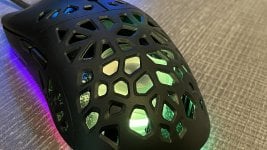 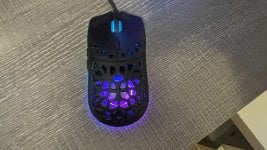 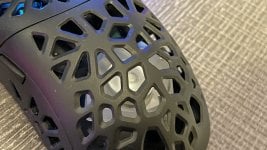 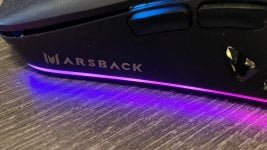 Beyond the fan, this mouse functions exactly as you’d expect a lightweight gaming mouse to. Through a button in the middle, the DPI can be changed between seven different levels; 400, 800, 1200 (default), 1600, 2400, 3200, and 16000, offering a sensitivity option for just about everyone. In game, with my DPI set to 1600, I found that my performance in shooters such as Halo: Master Chief Collection, as well as my go-to RPG Baldur’s Gate 3 was exactly what I’d hoped for; quick, precision controls that weren’t weighed down by a heavy cable thanks to the paracord covered elastic cable, or caught up on my desktop thanks to the smooth motion offered by the PTFE footpad. For customization options, beyond DPS controls there’s two buttons on the bottom of the mouse that can be used to change the lighting on the mouse body and fan respectively, as well as shut both the lights and the fan itself off. Beyond this, Marsback offers further customization through extra software for the Zephyr Pro that allows you to further fine tune and customize your DPI, RGB coloring, and set up macros for, realistically, as many profiles as you could ever want. In testing I ended up just spam-making 32 different profiles and only stopped because I was already going to have to delete so many useless profiles. Longtime readers of my reviews will know that I love customization options like this, and the ability to fine tune your experience as much or as little as you’d like. The Zephyr Pro offers as much of this as I could ever want. 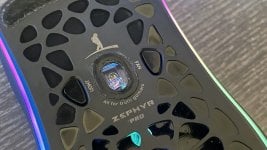 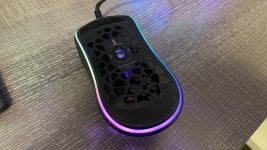 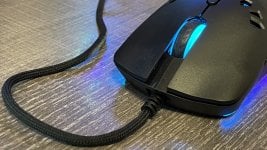 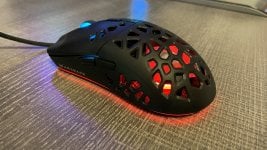 All things told, I’ve gotta admit that I’m definitely impressed with the Zephyr Pro. In terms of performance as a gaming mouse, it really doesn’t do a ton different to break the mold. But the addition of the fan without adding a ton of weight or extra noise from the mouse is definitely an interesting feature, and does help this mouse stand out amongst the crowd in my opinion. Retailing for $99.99, but currently on sale for $59.99, it’s hard not to recommend this mouse if you’re in need of a new one!

Marsback takes a proven formula with the lightweight, hole-filled gaming mouse, and adds a new spin in the form of a built-in fan that, while not perfect, definitely does help add some extra comfort to your gaming.
Reactions: Nikster31 and Julie_Pilgrim
Share:
Facebook Twitter Reddit Pinterest Tumblr WhatsApp Email Share Link
@WG481 say the line
Reactions: Nikster31