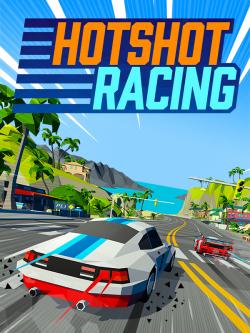 Retro racers are all the rage, but does Hotshot Racing race to success, or burn out too quickly?

Retro racers have always been and will always be a core pillar of my gaming. From the first "3D" racer I experienced on the Mega Drive and 32X, I have always held fond memories of playing Virtua Racing, Daytona and others of that Magical Sega ilk, yet I crave the action and devastation of their contemporaries, such as Burn out and Horizon Chase Turbo. Hotshot Racing punches in bunches and brings 4-player split-screen, 4-player online, 2-player local wireless, solid 60fps (regardless of console), 36 cars to choose from, 8 characters, a Grand Prix mode, cops and robbers mode, drive or explode mode, and a heck of a lot more besides! 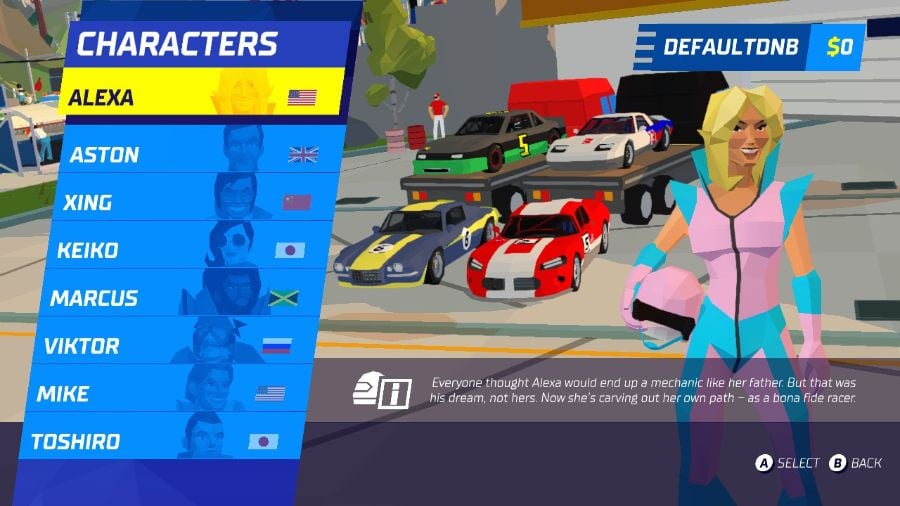 To begin with, I jumped straight into the Grand Prix mode and wanted to ease myself in. This mode lets you pick from one of eight globally segregated racers each with four pseudo-recognisable cars to choose from with varying traits and attributes. For my playthrough, I chose to represent my home country, the good old United Kingdom, with Aston, an over-the-top English gent with a stiff upper lip and a silver spoon wedged firmly in his cheek. Starting out with GP1 "The Tour" I put the pedal to the metal and chose a car that would see me through anything, an all-rounder, so I opted for the BullDog. The cars in this game are the defining factor in how you race. Each one of the four available to each racer contains a drift vehicle, a powerhouse, a nippy number and an all-rounder. Depending on your play style you will get varying milages out of each car, however, if you can pull off some slick snake-like drifting, you can rack up serious kudos and gain more invaluable nitrous to boost you over the finish line. Overall you have four GP cups to get to grips with, starting out with Tour, Pro, Elite and graduating up to Hotshot. Each of these modes can be played in either Normal, Hard or Expert modes, with a difficulty spike around the expert entry that really hurts you badly if you make even a single mistake and fail to drift enough to replenish your boost bars.

The controls are simple with the Left stick used to steer, ZR to accelerate, ZL to brake and initiate your drift, L and R operate manual shifting, A boosts, Y looks behind you, and X changes your camera view. The views available are excellent, with five positions to choose from, including an action-packed cockpit view (complete with a customisable bobblehead dash toy) and a nice tight arcade view that follows the action superbly while letting you view the road ahead at a particularly pleasing angle. Starting the rounds you can rev your engine and in doing so you quickly discover that revving between 6 and 7 on your gauge yields a super boost at the beginning, propelling you into first place immediately. Drafting in Hotshot racing is an extremely satisfying affair too, with a very Mario Kart feeling slipstream mechanic that momentarily increases your speed while motion blurring your periphery and slingshotting yourself past your opponents. I found this feature to be extremely useful in catching back up with the pack should things go awry, and more often than not they do on the harder difficulties. It has to be said that while this game plays admirably, controls fantastically responsively in regular modes, the same cannot be said for the motion controls. It pains me to say it, as I was looking forward to using them, but the motion controls are virtually unusable! I opted to use one set of Joycons (L&R) as one controller with a charging mount, and for all that is holy, I could not get any sort of reasonably response out of them. I retried, but this time just using just one Joycon and amazingly the response is a heck of a lot better, more akin to Wii Motion controlling Mario Kart or actually using a wheel. For this type of racing, I would definitely recommend a wheel grip accessory of something similar to give you a fuller racing experience, it is just a shame the dual Joycon method with grip was so horribly bad to use. 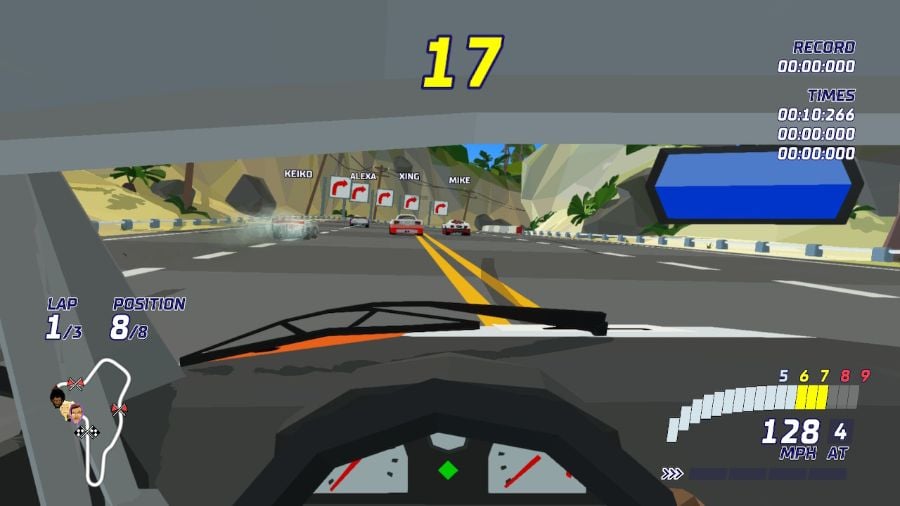 I had a lot of enjoyment playing through the Grandprix, and with 16 tracks to master (each with mirror modes) across Coastal, Desert, Jungle and Mountain environments, and while the visuals are lush and the action is infectious, there is something missing, on an almost chemical level, to elevate itself from its peers. The visuals and sound effects are perfect, the look and feel is bang on, but it doesn't quite define its own identity within its faithful emulation of games it has clearly drawn inspiration from. Hotshot racing is, unfortunately, a little forgettable in this respect. Though it certainly brilliantly fills a gap it simply doesn't swing for the fences or go the extra mile to differentiate itself. The characters are rigid and frankly cringy racial stereotypes that are out of place in 2020 and remind me of games like Street Fighter 2 back in 1991. Their in-game commentary is also distractingly wince-worthy with, for example, the stereotypical English "Toff" Austin referring to his gap year and how his father's poshness will prevail over and over again. The rubber banding of the AI is also infuriating at times, constantly riding your tail at every turn and punishing your every move should you swerve too sharply, or overdo it even the slightest amount. There is categorically no chance of winning with a decent lead; it seems logically impossible for the AI to be miles behind.

Having won the race, claimed the cash prizes, and watched an equally cruddy "Ending" (of which there is one per character), you wander over to the Race shop and head into the world of vehicle customisation. This is where the sense of potentiality abruptly ended for me though, as none of the options or tweaks you make bear any impact on your car. You could plough $100,000 on body kit, rims, lights, spoilers and accessories for our dashboard such as bobbleheads, but there was no engine upgrades, no turbo, nothing that made my car go any faster, boost any longer, or do anything it didn't already do in its initial coat of paint. I felt that my winnings were worthless and any hopes of using them for anything meaningful were dashed. If Hotshot Racing provided you with just a few tweak options to adapt your automobile into a full-on raging beast: Hotshot Racing could have opened the door to far more intricate racing configurations and more in-depth customisation to take it to a more worthwhile level. 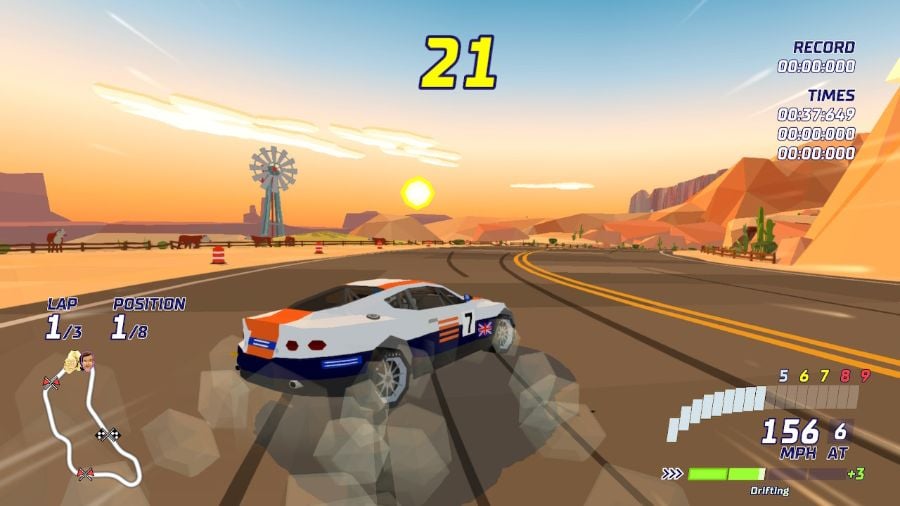 Environmentally the tracks are somewhat varied but feel a little clinical and rigid. Every track has its own polygonal stylised details and even easter eggs, such as fossil bones jutting out, the dolphin flipping over you at Sea World, and a UFO menacingly stalking in the periphery. However, in general, the road layout is primed for jostling and trading paint, and the wide lanes are relatively stale to burn through. There also didn't appear to be any shortcuts or cheeky offroad moments that could see you outsmart your opponents. Even in stages with Lava boiling at the side of your rims, you never had a possibility to fall into it, or sneakily avoid it, its just background detail and though some of it is evocative and incredibly pleasing to the eye, there are some super cringy moments, like the Dinosaurs and the Jurassic Park-esq gates that excruciatingly add nothing to the experience. Another sore point for me was that of the 16 tracks maybe 8 of those were unique, the other 8 contained recycled models or simply an alternate or reversed route within those original levels. It's not terrible, but it feels a bit tacky to have two tracks look identical but run slightly differently. I think maybe the devs should have pushed to make 12 unique and more diverse tracks rather than 8 unique and 8 that are essentially remixes. 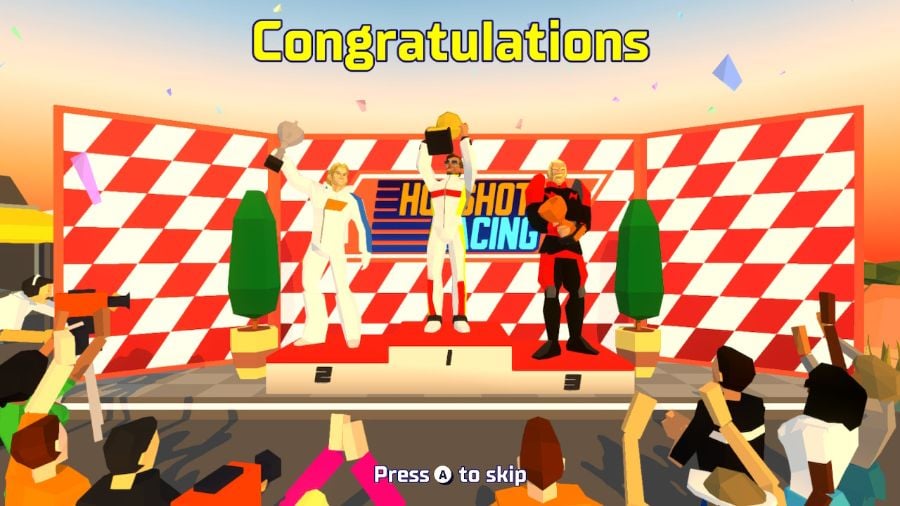 In terms of multiplayer Hotshot Racing has it all to play for. You have full four-player split-screen GP that really brings people together (in their COVID bubbles) to re-live those multiplayer days of being huddled around a Nintendo 64, or Dreamcast to smash some four-player gaming is glorious. The inclusion of modes that force you to drive faster and smarter, and chase modes akin to Burnout's legendary takedown modes is a genius move here too. You can play as the cop or the robbers, and as the cops stop the robbers, the robber then graduates to being a cop to help take the rest down, its like team tag, and the last to survive wins. Replayability is definitely there, but nothing to unlock and no level of customisation that has any impact on your car's attributes, unfortunately, really felt like a letdown.