Single player
Local Multiplayer
Online Multiplayer
Co-operative
What if we paired Mirror’s Edge with a one-hit-one-kill mechanic and play it out in a gritty, cyberpunk setting? That’s probably the pitch for Ghostrunner, indie studio One More Level’s upcoming game; so let’s see how it turned out!

Dharma Tower: a megastructure that has become humanity’s last shelter following an apocalyptic event. At its summit resides Mara, the sole ruler of the Tower, whose ruthless regime has led humanity back to the verge of extinction. Your task, Ghostrunner #74 - the most advanced blade fighter ever created -, is to climb to the top of Dharma Tower and defeat Mara. Up to the task? So, grab your sword and begin your ascent.

However, this ascent is not done from the Tower’s exterior but rather from the inside; from the bottom levels of the Base District to the topmost Summit level. And you won’t be totally alone in your task as you will be guided by rebel allies called the Climbers and the Architect, an A.I. of sorts, who was initially tasked to safeguard Dharma Tower until Mara’s takeover. As you progress across the megastructure, you will discover its various districts, the history behind its creation and the secrets of your own identity.

The plot is fine for the most part, even if it relies on the overused rebels vs iron-fist ruler in a future dystopia trope. But our protagonist isn’t very talkative and somewhat very trusting of who gives him instructions; characteristics that doesn’t really help the player relate with whom they are playing as, although more is revealed about Ghostrunner #74 later on. Nevertheless, there’s just enough story to give you agency to climb the internal walls of Dharma Tower; and climbing you will. 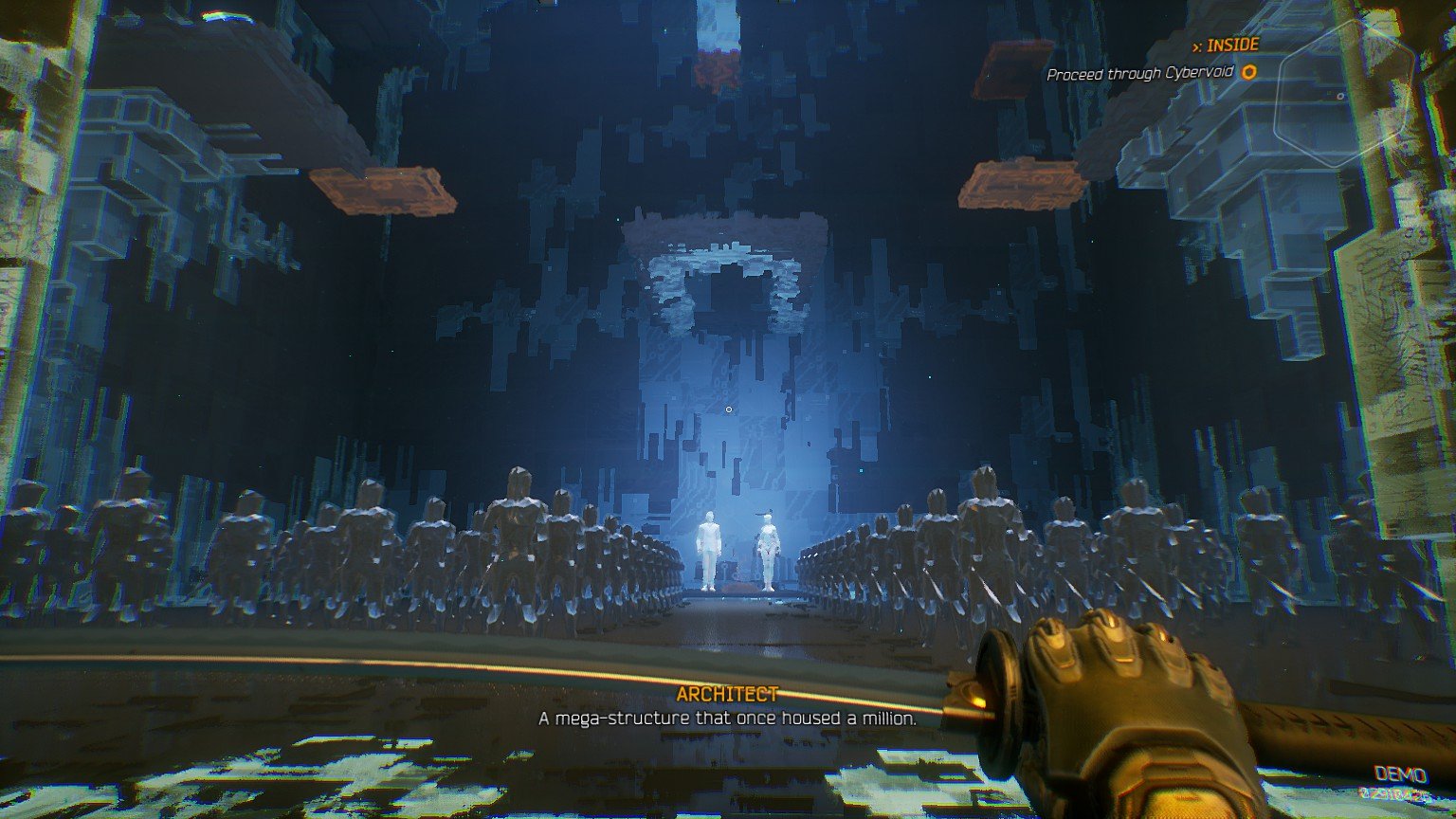 You’ll notice early on that the future dystopia you are in is a gritty one, imbued with the cyberpunk aesthetic complete with synth tunes playing on loop in the background and apparently designed by parkour lovers. There are platforms nearly everywhere and ample, conveniently-placed panels to wall run on. Despite being a hard to believe indoor setup, it’s hard to complain about it as these structures give you an edge in progressing. Indeed, in Ghostrunner, you’ll be doing lots of parkour in order to proceed from one level of the Dharma Tower to the next. And, of course, along the way, you’ll be outnumbered by Mara’s numerous guards and that’s where things get interesting.

You see, as straightforward as this game’s objective is - advance to the top of the Tower and take on Mara - the gameplay mechanic is similarly straightforward: kill or be killed. You have one life and so do your enemies; no life gauge, no difficulty settings. Dice Mara's guards with your katana as you parkour your way forward, but do so in one go. If you happen to die, you’ll respawn at the last checkpoint; and you will have to get used to respawning because repetition is an integral part of Ghostrunner. 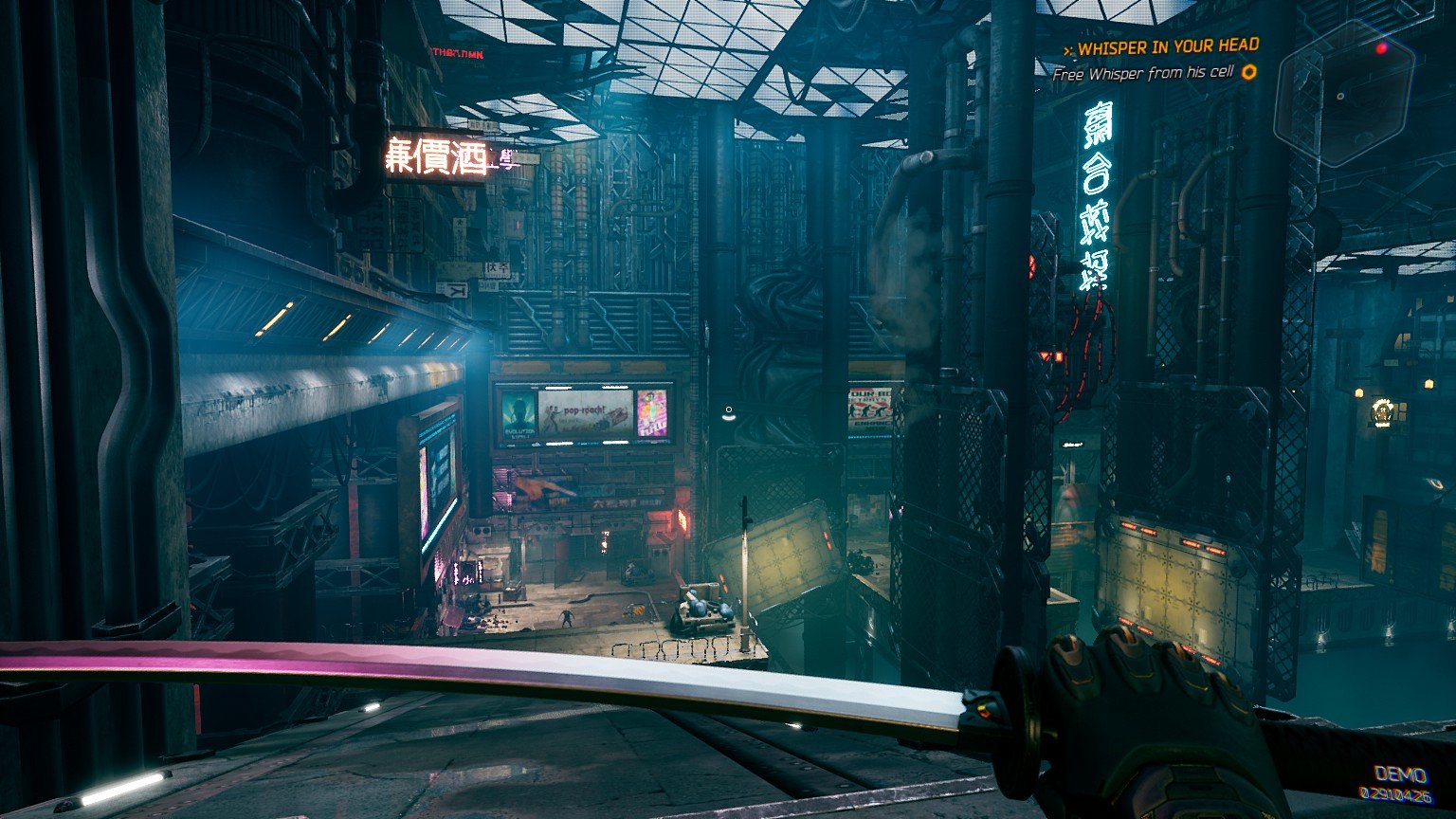 That’s because any enemy hit will instantly lead to your demise. It’s tough to get them all when you first progress through an area as opponents are quite spread out and you won’t initially know from where they’ll hit. There’s a radar that helps in locating where a guard is waiting for you but to slash and dash without taking a hit requires proper timing and, as is often the case, proper scouting of the area. Scouting is mostly done by having taken a path and died in the process because an opponent that was out of sight shot you from a distance or you didn’t time your jump properly and fell to your death. Once you respawn, you will better be able to determine if you should take the same path or try another route. The gameplay does rely on multiple trial-and-error sessions so that you can rely on muscle memory over time. This aspect very often gets frustrating but the satisfaction after successfully completing an area is guaranteed. Another downside that I noticed is, if I cleared a particularly demanding section and proceeded to the next checkpoint and called it a day, when I'd reboot the game, I'd have to restart the whole level, rather than begin at the last checkpoint. This means that you'll have to stick to finishing a whole level and take into account its multiple tries before deciding to quit.

It can also get annoying in areas where you’ve cleared most enemies on your path, only to find that the access ahead is blocked as there are still others waiting to be beheaded; and this implies risking taking an enemy shot and painstakingly restarting the area’s cleanup again. In each level, you’ll move from one such area that’s populated by enemies waiting to be butchered to the next, interspersed with smaller, “breather” areas made up of simple puzzles and parkour platformer sessions. 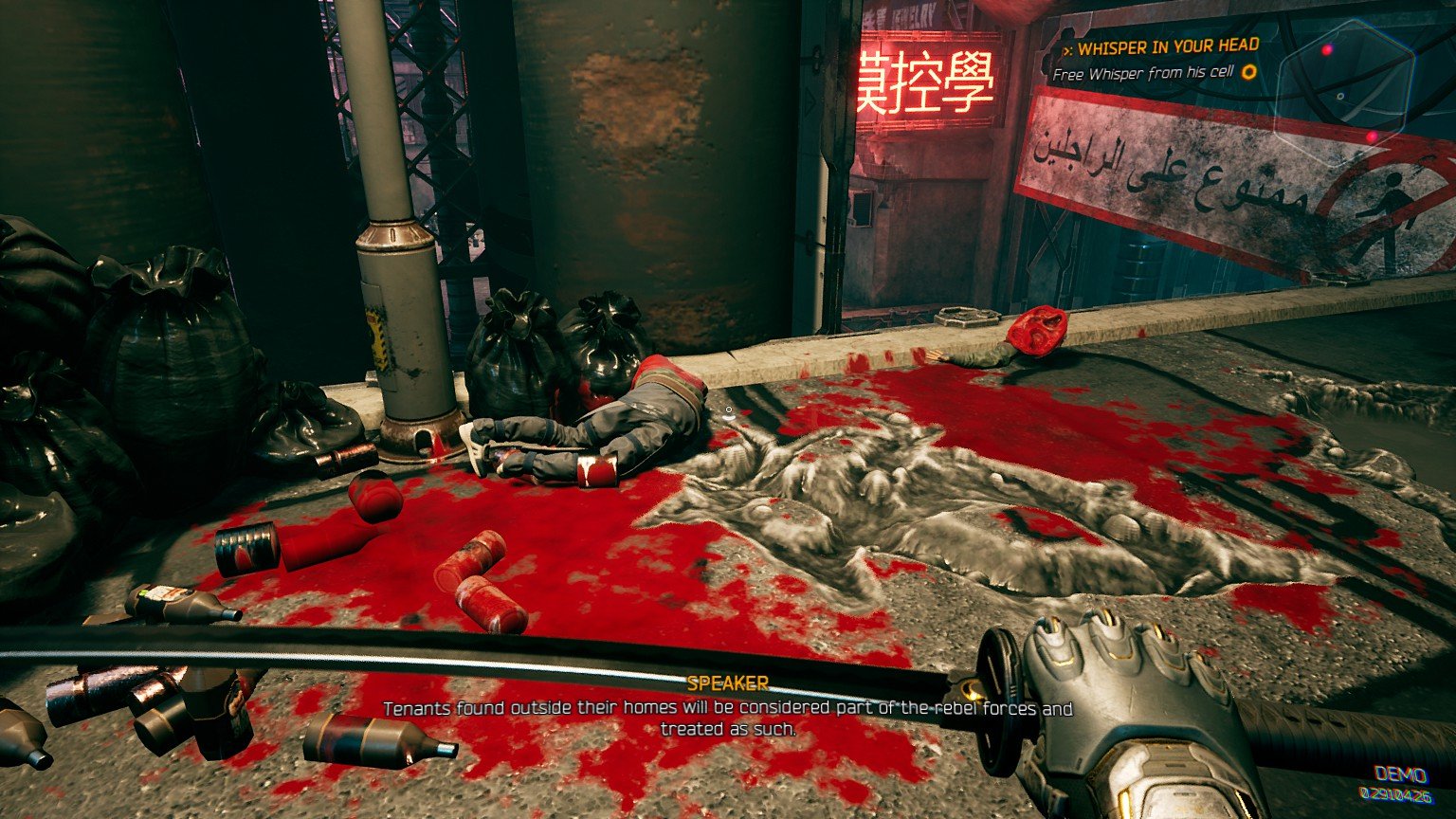 Despite the oft-frustrating need for repetition, the really fast-paced and adrenaline-inducing aspects of the gameplay ultimately turns Ghostrunner into a surprisingly fun experience. This is enhanced by the protagonist’s abilities that help him off those standing in his way. There’s the Sensory Boost, a bullet time of sorts, that dilates time and gives you a speed boost while allowing you to plan your next move. Then there’s the Gapjammer, or a sci-fi grappling hook, that allows you to take to the air, not unlike Spider-Man. As you progress, you will unlock additional abilities such as Blink that lets you kill any target enemy within range in a blink, and Overlord, which gives you momentary control over an enemy. There’s also an upgrade system to further enhance those abilities.

It’s not just you who has abilities either as there are also several enemy types with abilities of their own from the self-exploding Wreck through the long-range Sniper to weaponized drones. The latter are quite fun to interact with as you can leap on top, transforming them into a hoverboard and sending them crashing towards other foes. Other enemies add another layer of challenge by being shielded from any attacks and whose shield source, an orb, have to be destroyed before inflicting any damage. However, despite having several enemy types who require different tactics to attack, the frequency at which you face them make them feel more and more familiar and less unique.

I also couldn’t shake off the feeling that a lot of assets were reused. As you ascend Dharma Tower, you will get to see varying sights but similar features will persist. You’ll mostly see stairs, platforms and such that do help in parkour and wall running but not so much in diversifying the setting. Even with some visual tweaks, scenes feel more of the same by virtue of the gameplay. But the sights and scenes the game offers often do impress when it properly emulates the cyberpunk atmosphere enhanced with the original synth tunes playing in the background. 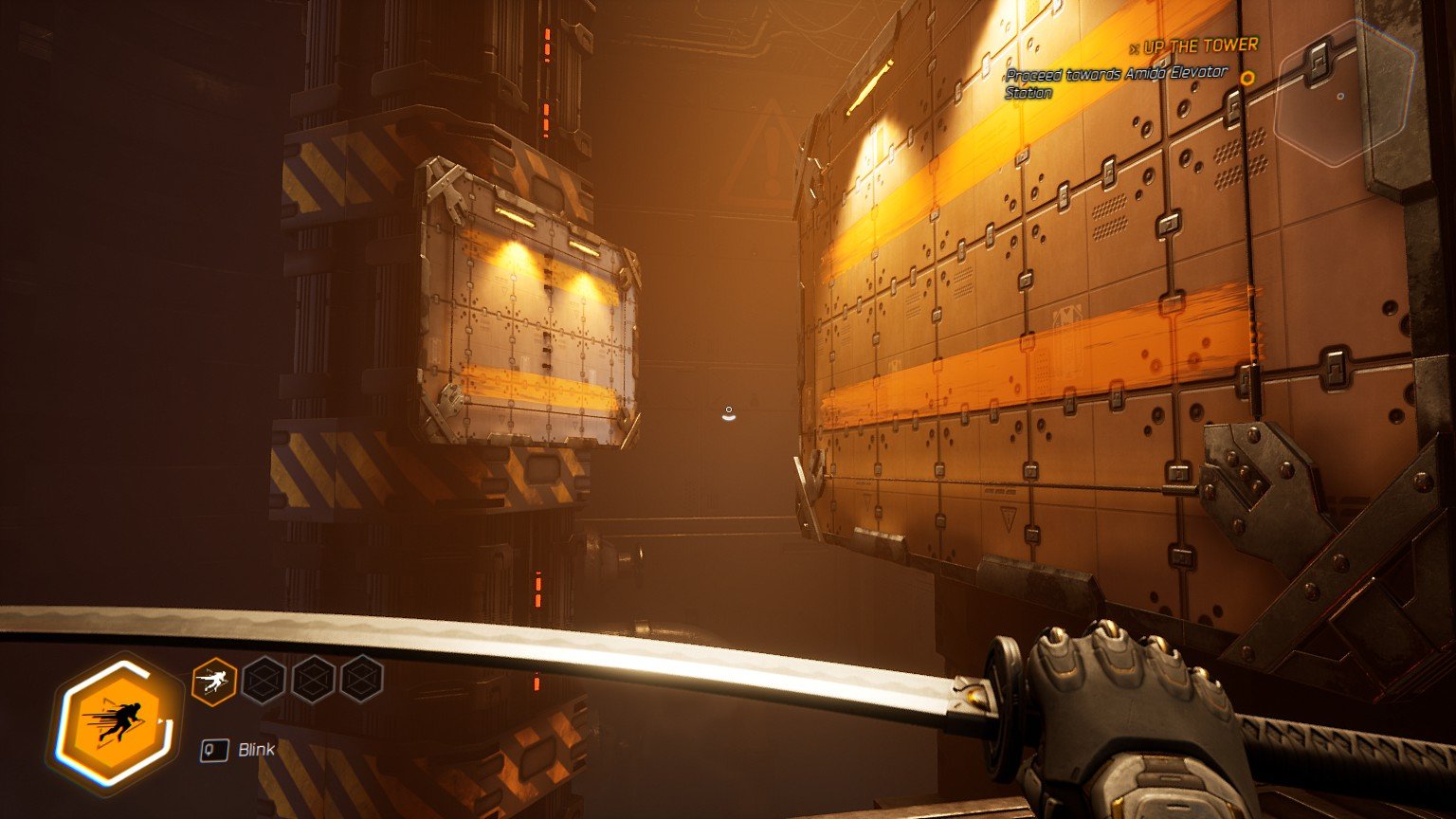 As I grew accustomed to the similar scenes and need for repetition, I came to realize that Ghostrunner essentially boils down to a cleverly-disguised maze escape game. It's almost always the case that I've had to follow a specific pattern in order to exit the maze, or the area I'm in. Tackle the enemy in the middle, then circle back to destroy the orb shield and finish off the two remaining guards. I could try starting with another route as the areas do offer a sandbox-y approach but other routes proved either more challenging or even impossible to progress through. Most baddies don’t really move around much either, so their position and "behavior" can be etched in memory, as with the area’s layout. Once I've an aha! moment and figured out the proper sequence forward (hence the importance of studying the environment), I knew that things were about to get really fun and satisfying as I would proceed to successfully slice up enemies in style.

So really, Ghostrunner is comprised of elaborate mazes that require patience and quick-wittedness. Consider your first run through an area as reconnaissance, second time as practice and third (and subsequent) times as fun, even if it does get frustrating at times. It’s not as expansive as the other upcoming cyberpunk game (though Ghostrunner does include some not-so-subtle references) and is a title that stands on its own. Considering how its relatively small indie team of 32 came up with an original, captivating gameplay and, honestly, a fun take on the cyberpunk genre, it’s worth giving it a shot. 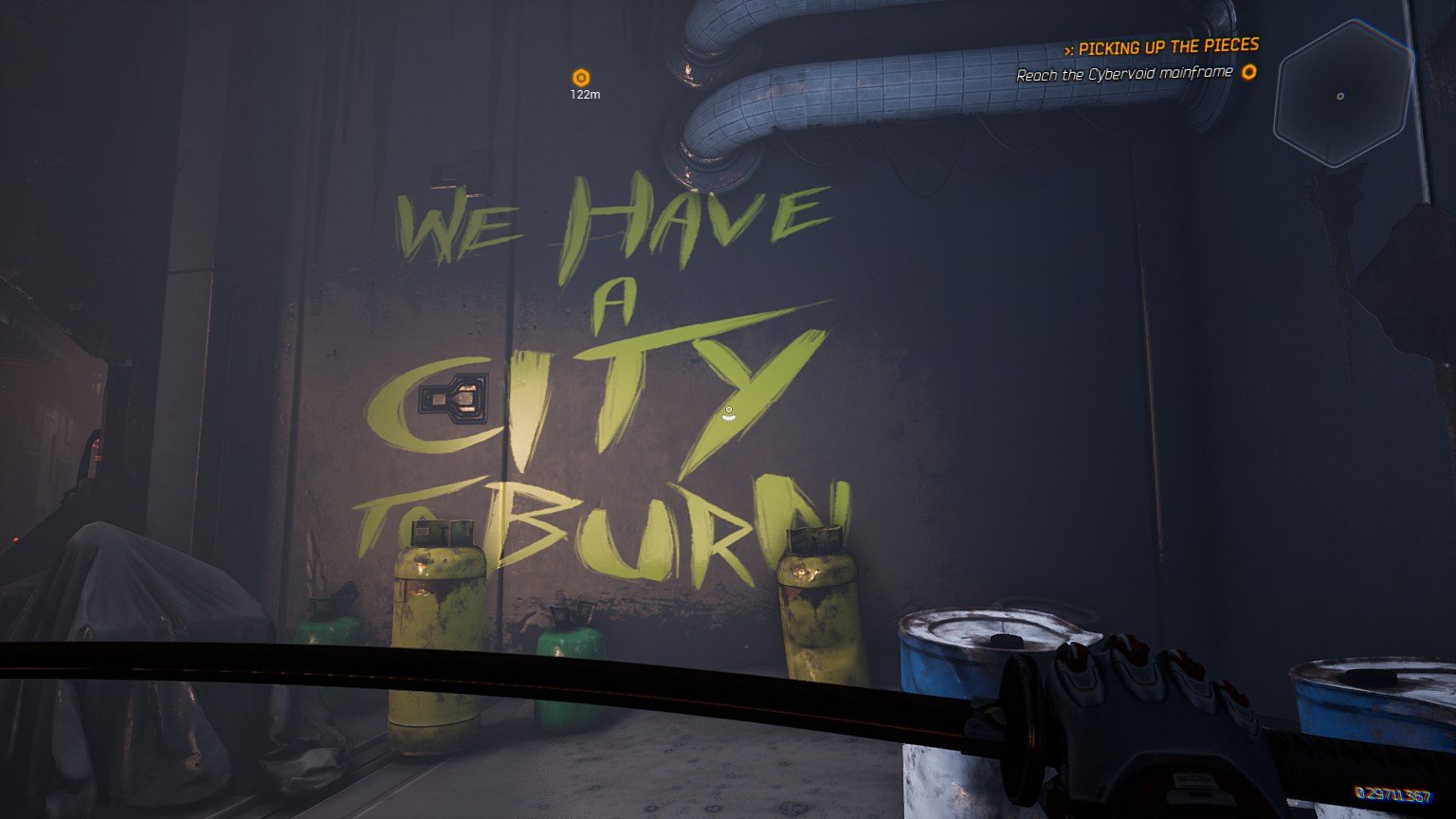 What We Liked ...
What We Didn't Like ...
8
Gameplay
Despite relying on repetition, patience and muscle memory, the feeling of satisfaction after clearing every area greatly compensates.
8
Presentation
The cyberpunk aesthetic is there and is often a sight to behold but throughout levels, reused assets are flagrant.
8
Lasting Appeal
The reliance on repetition can get frustrating but the fast-paced gameplay and feeling of satisfaction really gets you hooked.
8
out of 10

Yeah it would be nice to be able to slash out of sheathe and it would be nice to have some intermission/puzzle segments to add a little something, but you can't expect too much from a $20 game (GMG). This one's just all about the parkour and the action. I quite enjoyed the demo.
Reactions: splymb

Xzi said:
Yeah it would be nice to be able to slash out of sheathe and it would be nice to have some intermission/puzzle segments to add a little something, but you can't expect too much from a $20 game (GMG). This one's just all about the parkour and the action. I quite enjoyed the demo.
Click to expand...

I mentioned in the review that you do have areas with puzzles without any enemies.
Reactions: Xzi

Prans said:
I mentioned in the review that you do have areas with puzzles without any enemies.
Click to expand...

Sorry I must have skimmed over it, that's good to know. This was one of maybe three demos from the recent Steam events that really impressed me, so I was essentially already sold on it.
Reactions: Prans
I've been trying to buy this game (digitally) on the switch, but even now, there seems to be no eshop page for the game. is this a retail only thing?

godreborn said:
I've been trying to buy this game (digitally) on the switch, but even now, there seems to be no eshop page for the game. is this a retail only thing?
Click to expand...

Proably no pre-order on Switch, release is tomorrow.
Reactions: godreborn

Xzi said:
Proably no pre-order on Switch, release is tomorrow.
Click to expand...

I hope so. if not, I might get oceanhorn 2. I have the first one, which is pretty good (definitely no zelda though), but the sequel comes out on the 28th. I just searched the eshop for ghostrunner while on the system. it doesn't list it, but oceanhorn 2 caught my eye. I'm also kinda interested in odd world, but I don't know what that game is like. both games are having preorder sales.
Respect for using Arabic written correctly instead of a disjointed mess <3
Reactions: Prans
It reminded me of Titanfall on some screens.