I avoided COVID-19, researched, tested (with a fully re-capped Sega Game Gear), and then got to work writing... a follow-up to my Everdrive GG review.
The Everdrive GG X7 is a simple to use Flash Kit solution for the Sega Game Gear. Designed by talented Flash Kit designer Krikzz, the Everdrive GG X7 joins a lineup of excellent retro hardware solutions. It supports GG, SMS, and SG-1000 ROMs, offering a library of over 600 games while on the go. While emulation has taken amazing strides, nothing beats the feeling of enjoying a classic game on original retro hardware!

GBAtemp Review of the... 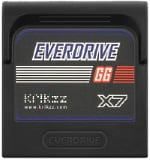 Emulation has made incredible strides. Once a technology limited to computers, emulation now provides a means to enjoy many gaming experiences while on the go. The Sega Game Gear has been emulated many times over and those programs ported to more than a few portable systems. Modern phones, 3rd party Chinese clone systems, Linux-based devices, Tablets, and even our hacked Switch consoles are capable of producing excellent Sega Game Gear emulated experiences. While these experiences feel enjoyable to the casual retro gamer, hardcore retro fans will quickly remind us that nothing beats playing on the actual system. Thanks in part to hardware such as the Everdrive GG X7, we can skip the emulation and enjoy gaming on our Game Gear systems for years to come.

The Game Gear was far from perfect as a portable. What it did have going for it was a center-mounted screen, comfortable form factor, and responsive input buttons. The Everdrive GG X7 is a wonderful addition to this hardware, as it provides a means to carry the supported Sega Game Gear and Master System games on a single cartridge. This support also provides a unique opportunity to try translated games, homebrew, and ROM hacks on actual hardware. Powered by rechargeable batteries, an AC adapter, or a car adapter, and utilizing the Everdrive GG X7 Flash Kit, the Game Gear begins to feel more modern and relatively complete.

The Official GBAtemp Everdrive GG review (07-04-2014) was written while testing the Flash Kit on a piece of aging hardware. Since then, the Game Gear used for all review testing was fully re-capped by a professional retro hardware expert! It was gone over and found to be 100% fully functional. While I did opt for the glass screen cover, I decided to leave everything else stock, including the original screen.

Special thanks must go to Krikzz for providing the review sample! 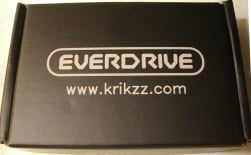 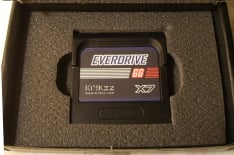 The Everdrive GG X7 review sample was sent directly from the developer and includes all retail packaging. The cartridge shipped inside a matte black cardboard box. The box opens from the top, and locks shut from the front via two "wing flaps", that tuck back into either side. The top of the box displays the official Everdrive logo and Web site URL. The top-inside of the box is lined with a crush-resistant foam. The cartridge was additionally secured inside of a thick foam insert. The insert fits the box perfectly and eliminates any possibility of movement during shipping. The cartridge itself was further protected inside of a clear plastic bag, held shut by a clear round sticker.

The Everdrive GG X7 will accept microSD cards in the spring-loaded mSD slot. Cards must be formatted in Fat32. To minimize errors, cards should be formatted using the official Panasonic SD Formatter and not with 3rd party software. All O/S files are currently hosted on the official Everdrive homepage. As of the writing of this review, the latest build is v1.04 (12-02-2019). Inside of the .ZIP archive is a folder title "SMSSYS", which contains file titled "SMSOS.bin". The "SMSSYS" folder must be placed into the ROOT directory of your mSD card. ROMs can be placed anywhere on the mSD card as the O/S offers a full rage of directory navigation. However, each directory is limited to 1,000 files, and ROMs should be organized accordingly. Once the mSD card is set-up correctly, it is placed into the shell with its contact teeth facing away from the logo sticker. 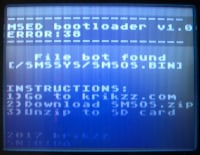 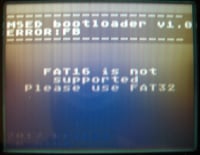 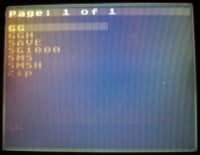 Powering up the Game Gear with the Everdrive GG X7 inserted will display "OS init...". The Everdrive GG X7 will then boot into the ROOT directory of the mSD card, and display all folders in yellow font. This is the default directory listing that is displayed with each power-cycle. Navigating to a folder and then pressing Button 1 will open it. Folders will display as a listing of 12 files formatted across multiple pages (depending on the amount of files contained within each folder). Pressing Up or Down on the directional pad will navigate through the files, while pressing Right or Left will switch pages. The gray bar at the bottom of the screen will always display the untruncated name of the currently selected folder or file. Pressing Start will bring up the Main Menu (Start Last Game, Options, Recently Played, Random Game, Device Info, Diagnostics, About). Pressing Button 1 will make a selection, while Button 2 will always cancel. 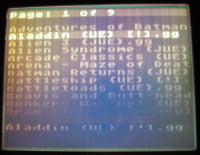 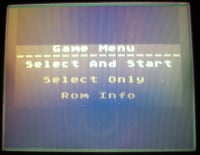 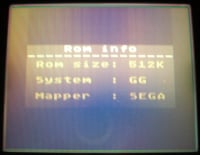 In the Main Menu, selecting the option to Start Last Game will instantaneously load the ROM currently flashed. Selecting Options will expand the main menu with specific options for the in-game menu (ON/OFF), its hot-key definitions (default: UP+1+2), and an option to hide the "SMSSYS" folder (ON/OFF). The Recently Played option will display a listing of the last 11 executed ROMs. Random Game will select 1 ROM to load, randomly, from the current directory. System information such as the cart name, O/S version, FPGA version, and even a power cycle counter can be found in the Device Info options screen. Selecting Diagnostics will run a test to determine the health of the GG X7 (RAM/ROM, read-write speeds, etc). The About option will display various information about the Everdrive such as the name of the kit, the developers name, the official URL, a stamp "made in the Ukraine", and even a mini-manual that explains basic O/S navigation. 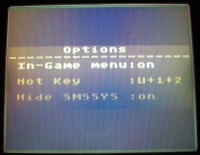 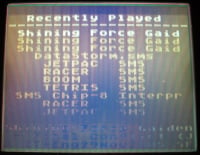 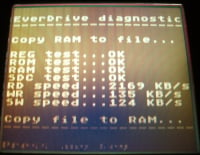 The GG X7 supports .GG, .SMS, and .SG ROM files. Compressed files (.ZIP) are not supported. Pressing Button 1 on any ROM will display a menu with options to Select and Start, Select Only, and ROM Info. Select and Start will flash the ROM and then execute it, where as Select Only will flash the ROM and then do nothing else. ROM Info will display the file size, what system the file is for, and what mapper it uses (EG: 512K, GG, SEGA). When a ROM is executed, it will load instantly as if on a retail cart. The in-game menu offers an option to soft-reset, however, a power-cycle will be required if this fails. The current ROM's SRAM save data is stored even after power-cycling. This SRAM is backed-up automatically when a new ROM is flashed. When the corresponding ROM is rewritten, so is its save data. ROMs can also be saved with the in-game menu save/load-state options.

An original SEGA of America, unmodified Game Gear console and an original AC Adapter were used for all testing. The Game Gear was professionally re-capped prior to this review. A 2GB Samsung microSD card was used for all file testing. The card was formatted using the Panasonic SD Formatter. SEGA Game Gear and Master System ROMs were placed inside their own ROM directories located in the ROOT of the microSD card. A collection of games from each system, in addition to some homebrew and SG-1000 games were tested for this review. Each game was tested for a period of 20-60 minutes. Only some games were completed, and the potential for errors remains a possibility. The results are listed below, each followed by a color coded phrase. ROMs which failed to run simply did not work or were unplayable due to various issues. Those that loaded and were playable, yet had problems running, may include such problems as pallet color or in-game menu issues. Files which passed testing ran without issue and were fully enjoyable.

Sega Game Gear and Master System games played without issue, as did SG-1000 games. The Game Gear release of Mickey Mouse - Castle of Illusion was confirmed a good dump and tested on more than one occasion. This game performed the same across multiple retests and remained unplayable. Homebrew results were mixed between both systems. While it was nice that some projects performed wonderfully, it remains disappointing that the majority of the Game Gear projects simply did not work. The in-game menu caused some Game Gear games to hang, focing a power-cycle. In regards to homebrew, the in-game menu only functioned with two titles, Data Storm and Tetracycline. Disregarding homebrew and in-game menu issues, the GG X7 resulted in an almost 100% perfect compatibility.

Emulation is a wonderful way to experience a classic game. Developers work very hard to make sure their emulators have a high compatibility and are loaded full of interesting and fun features. While emulators can often reproduce most of the experience, they can not come close to playing those same games on actual hardware. This is where Flash Kits come in, offering a solution for retro gamers who either are not collectors or would rather preserve their old carts.

Over the years we have seen a few talented companies step-up to produce retro Flash Kits. It was not until recently that these kits became increasingly simple to utilize and sold at a more affordable price. The Everdrive GG X7 is once such kit, an easy to use solution that does not require any special set-up procedures. ROMs can be drag and dropped onto a properly formatted microSD card, and within minutes enjoyed on actual hardware. The Everdrive GG X7 is professionally built and designed for enjoyment thanks to its high compatibility with Game Gear, Master System, and SG-1000 games. Truly, you’ll easily find new reasons to pick up and play your aging Game Gear with an Everdrive GG X7 inserted.

Verdict
You, HylianBran, Charli and 7 others like this.
Unlike this review 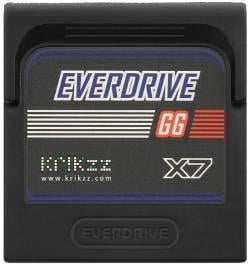