The NIZ Plum keyboard offers all the illustrious glory of a Topre, but without the sticker-shock cost of importing from Japan.

When it comes to buying a gaming keyboard, most are interested in getting away from the budget feel of membrane "switches", opting instead for the ever-popular mechanical style keyboard. There's a special middle ground, however, which belongs to the electro-capacitive keyboard. It uses the rubber domes that membrane keyboards do, while also offering a very tactile typing feel like a gaming keyboard would. Usually, one would find these kinds of switches on a Topre keyboard, but they tend to be elusive, exclusive to those that reside in Topre's headquarters of Japan. Due to that, EC keyboards are rarely seen in the west, and when they are, they tend to come with a startlingly large price tag that warrants their imported nature.

At the time of this review being written, a Topre Realforce RGB keyboard is currently sitting on Amazon.com's third-party seller store for either two price options: $348.99 or a laughable $804.87. Clearly, that's not a price that many can afford, especially for a mere keyboard. EC switches are fun, but they're nowhere near worth that kind of money. So with such a dilemma, what's a keyboard enthusiast to do? Well, Epomaker hopes to answer that with the NIZ Plum x87, an electro-capacitive keyboard, easily available to those in the west, and for an affordable cost. Is it too good to be true?

By all appearances, you'd be forgiven if you mistook the NIZ Plum keyboard for something that was dragged out of your parents' attic; a relic from the 1980s era of computers. The keyboard has two colour tones: off-white and light-grey, which make for a very minimalist and retro style. It's a look that you'll either love or hate, and it especially doesn't fit the standard theme that most gaming keyboards go for, but the entire existence of the NIZ Plum seems to revolve around going against the grain of modern keyboards. The colour scheme is relaxed, perfect for a calmer, more elegant environment. Thanks to its light tones, the keyboard looks pretty cool even in low-light, with shadows from lower-row keys cast against ones higher up on the board. 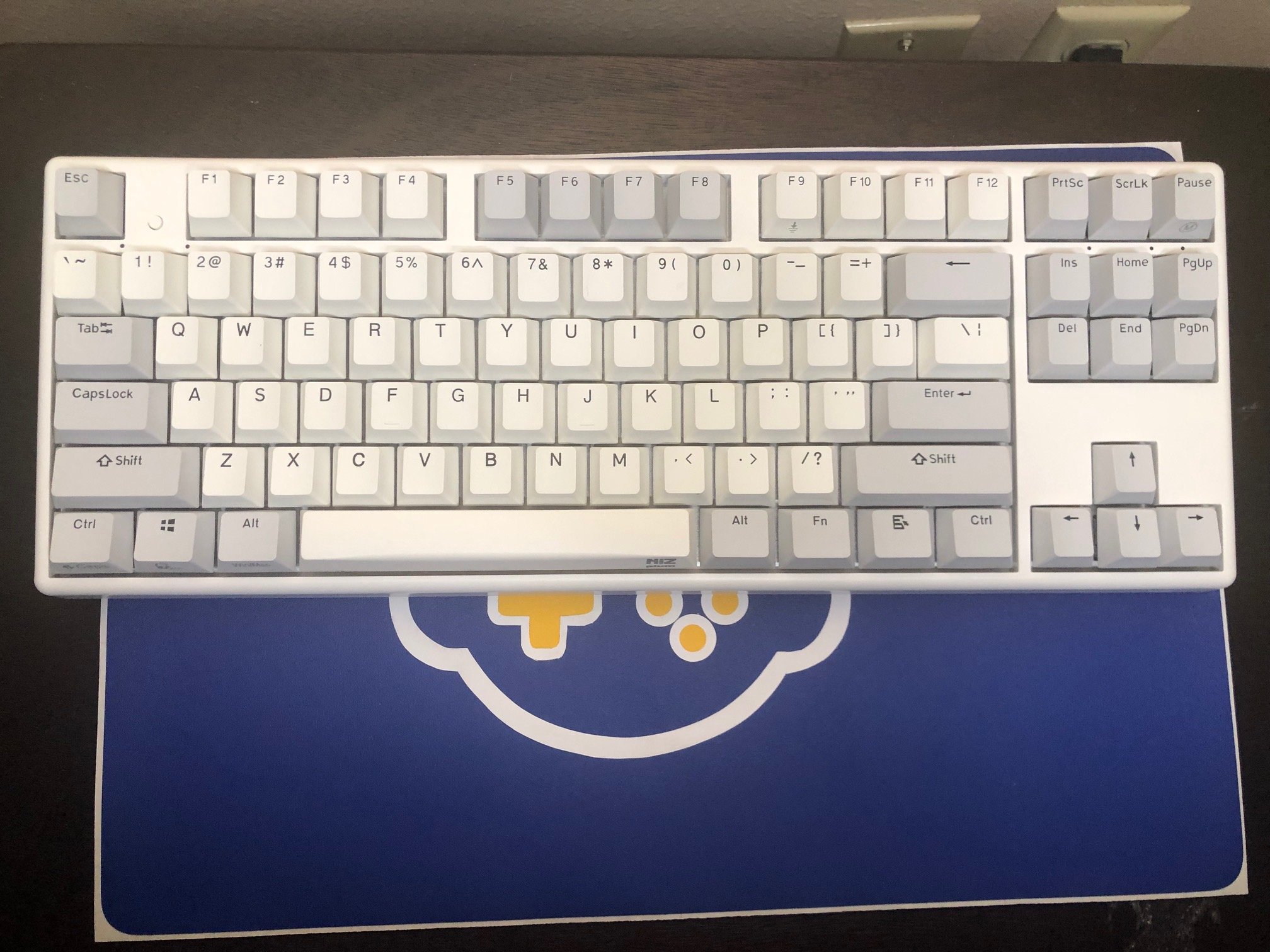 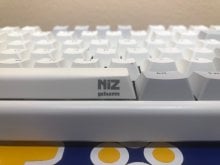 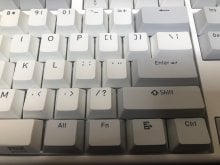 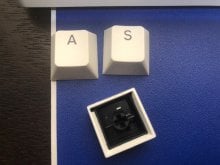 As is commonplace for EC keyboards, there's no RGBs to be had⁠—not even so much as a backlight is available. I would have liked to see a backlight, but at the same time, given the old-school appearance the keyboard is aiming for, I don't think I mind the lack of lights as much as I would with a standard keyboard. Having multicoloured lights would look out of place on such a nice keyboard, and since the Plum has PBT keycaps, any form of backlighting would look cheap, too. To make up for that, the keyboard offers Bluetooth 4.0 wireless⁠—which appears to be an exclusive feature to the NIZ Plum when it comes to EC keyboards, as all others are wired only.

Whereas a mechanical key would have a tactile feel near the end of its travel, an electro-capacitive key has a "bump" to it as it actuates. It's an almost backward feel to regular mechanical keyboards, and it gives the Plum an incredibly unique feel in a league all on its own. Beneath the keycaps, you can see just what the EC switch looks like; a white stem and a clear dome sitting underneath it, with a tightly-coiled spring that gives the switches their iconic tactility. This gives the keyboard a low-pitched "thoc thoc" typing noise, rather than a brighter "click clack" you tend to hear from regular keyboards. It's quite an odd sound, easily distinguishable, with nothing else quite like it. You get the lower sound profile of a membrane keyboard, without sacrificing any of the fun springiness from a mechanical.

In addition, it also means the actuation point of these keys is ridiculously low⁠—even mechanical keyswitches designed to be linear and have low travel can't really compare to how smooth and simple an EC spring switch is. Keypresses are effortless, and when used for gaming, you can get in some super-fast inputs thanks to that fact. Whether or not you'll enjoy typing on this kind of switch is down to preference, but one thing is for certain: it'll seriously up your WPM game when it comes to typing. 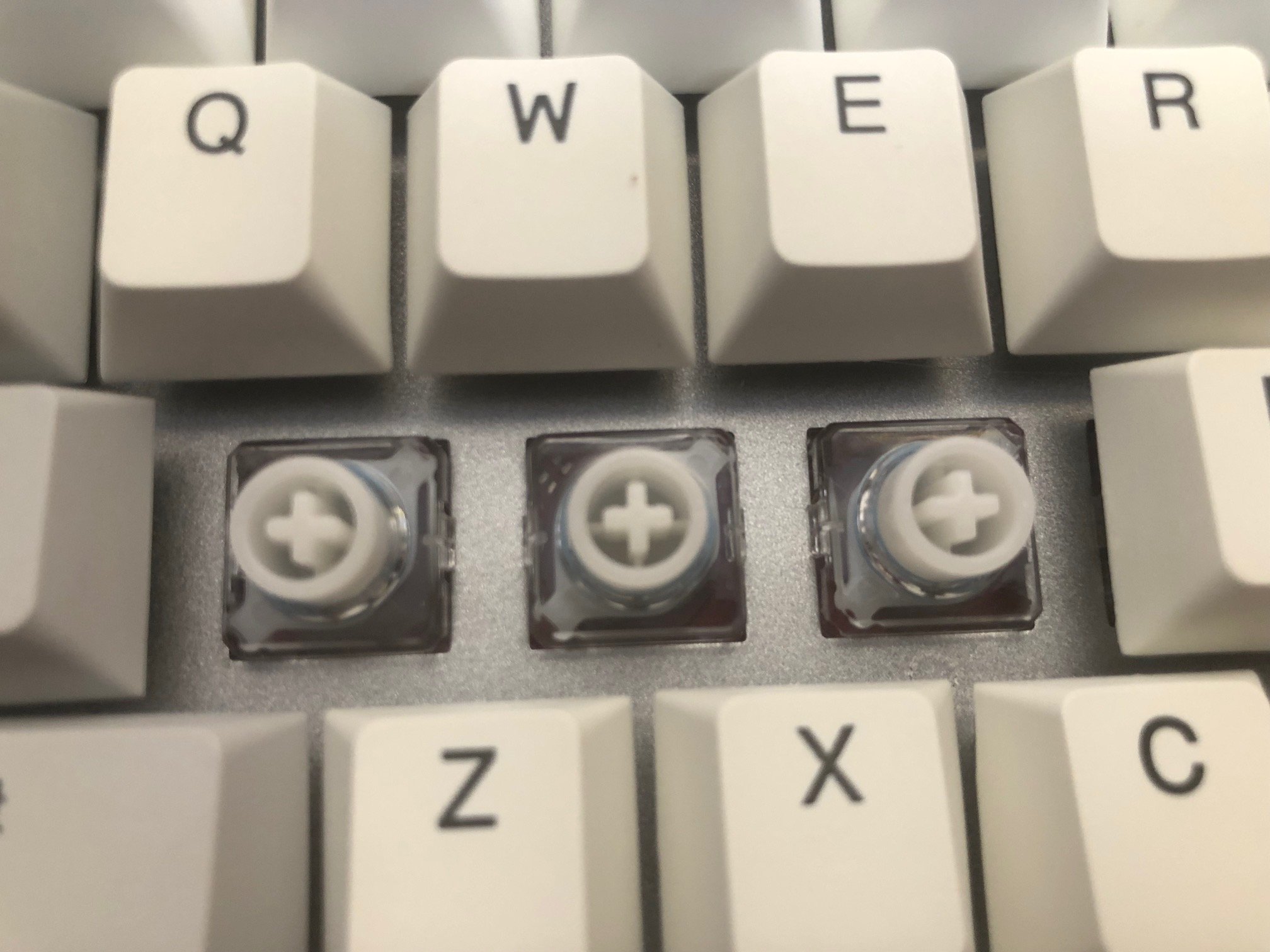 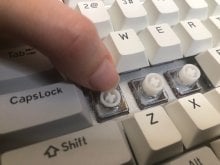 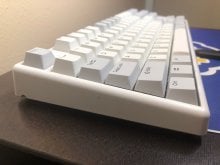 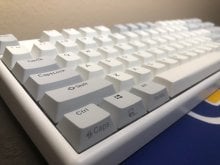 Despite all the differences from a mechanical keyboard, luckily, there's one thing it has in common: the stems. The T-shaped stems present on most standard mechanical keyboard switches are present on the Plum NIZ, which means you're able to easily replace the keycaps with just about anything available for traditional keyboards. Should you really want to take the chill greyscale colour combo to another level, you're absolutely free to. That being said, if you do like the keycaps that come with the Plum, you won't have to worry about replacing them anytime soon, since they're PBT, and the lettering won't fade away. They're nice keycaps, smooth to the touch, hardly any rattle or echoing, though the plastic does feel a little on the thin side.

It's an absolute treat to see an EC keyboard that won't cost you an arm, leg, and your firstborn child. As far as keyboards go, $150 will get you pretty far; something with fancy RGBs, tons of dedicated media keys, special features, and maybe even more than that. The Plum NIZ doesn't have any of these things, which can make it a rather tough sell for mainstream keyboard users. However, what the Plum NIZ does have are those lovely EC switches, and that's something that will pique the interest of many niche fanatics, finally giving them the chance to pick up such a fun, understated, and unique keyboard. 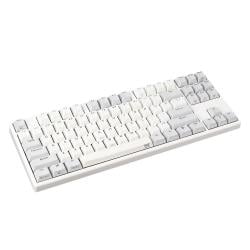