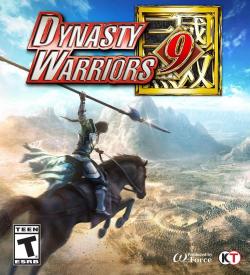 Are you ready to pile up a body count unto the heavens in Omega Force's latest entry into the popular Dynasty Warriors series?

Dynasty Warriors 9 is Omega Force’s latest entry into the series, and their first attempt at introducing it to the wonders of open world gameplay. Most series seem to be trying their hand at that these days, but Dynasty Warriors is one of the few series that could very easily work in such an environment. So, does Dynasty Warriors 9 pull it off? Let’s take a look…

The Beginning of Ambition

The very first thing you’re met with when starting the game, is a timeline, broken into 13 chapters dividing all of the major events across the games storyline into neat little packages. All of the game’s characters begin their journey at different points of the timeline, and progress typically until their ambitions meet their end. Dynasty Warriors 9, more than any other game in the series, seems to really favour telling each characters story in detail.

This focus on story does make the game quite dialogue heavy, though you of course can skip every bit of it if you so desire. You’re able to easily drop in and out of different characters stories, as the game makes separate saves for each and every character. As you finish a chapter, you also unlock every character whose journey started there. Starting with only Liu Bei, Cao Cao and Sun Quan, this allows you to quickly build up the roster of characters regardless of the story you decide to follow. 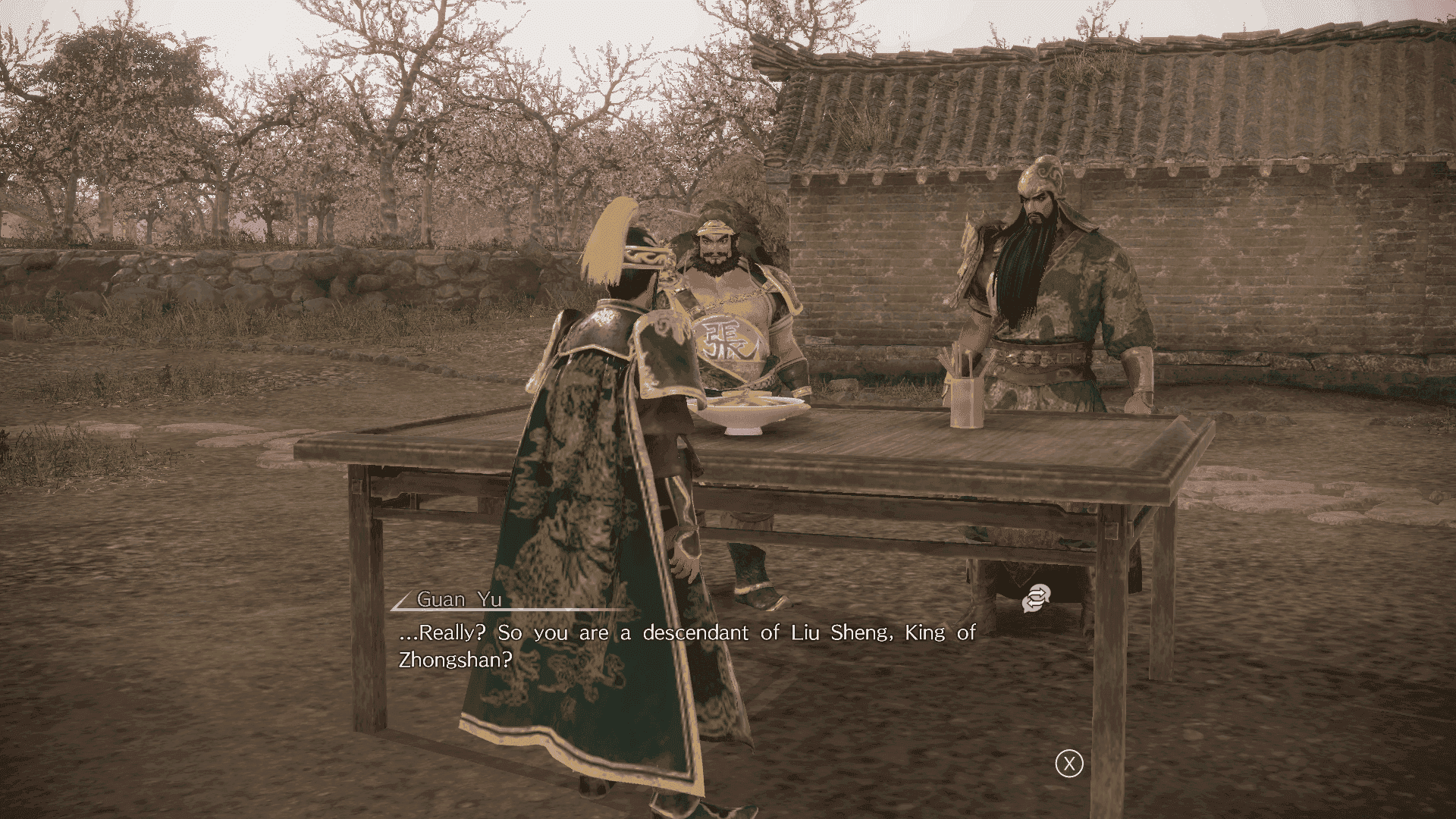 Despite the focus on story, there are a few issues. Most of the dialogue is done using in-game assets, and as such consist entirely of characters standing still and conversing. It can be a bit dull, and also a bit janky at times. More than once, I had my foot soldiers practicing their levitation whilst I listened to an officer speak. Honestly, it’s pretty amusing, but it does look a bit bad from a game design perspective.

Unfortunately the biggest issue I had with the story is the English voice acting. Typically Dynasty Warriors games actually have a pretty solid roster of voice actors that do a great job of fleshing out the character they represent. However, in Dynasty Warriors 9, it seems there was a massive roster change likely due to the huge voice actor strike that took place in 2016/17. Nearly every single character has a new voice actor, and boy oh boy was talent not a requirement when hiring. Some, and I can’t stress enough that I do mean a very small some, of the more focal characters seem to have okay voice actors. But most of the characters, and especially a majority of the minor characters (no-name characters and such) have horrendous voice acting. There are times where the voice actor will simply stop dead in the middle of a sentence, only to resume a second or two later for seemingly no reason. Other times you can clearly tell someone is just blandly reading off of a script in front of them. It’s bad, it’s really bad. Luckily there is the option to use the Japanese voices, which as far as I can tell are well done. I can’t say I’ve ever switched to Japanese voices in a videogame, at least not since Arc Rise Fantasia, but there really was no other choice in this case.

Piling up a body count

Omega Force has taken some ambitious strides to bring Dynasty Warriors 9 into a new era. While some changes are wonderful, many seem to unfortunately fall a little short of what they were perhaps aiming for. Still, it’s nice to see the series finally starting to evolve from what it has typically been for a very long time, while still retaining the soul of previous games.

Combat has probably seen the most significant fine tuning. While Dynasty Warriors 8 felt solid, 9 took steps to push the combat into a more intuitive direction. Attacking is a lot less about counting to perform specific strong attacks, and more about making things buttery smooth as you hack and slash your way through entire battalions of soldiers. Combat now flows a lot more fluidly, with things like a knockdown attack, stun, counter, and air dashes. It’s a heck of a lot of fun air dashing out of combos all over the place, countering, executing low HP officers, etc. I think there’s more depth they could add but this is definitely a good place to start and I appreciate every change they made to the combat. It felt incredibly satisfying the entire time I played. 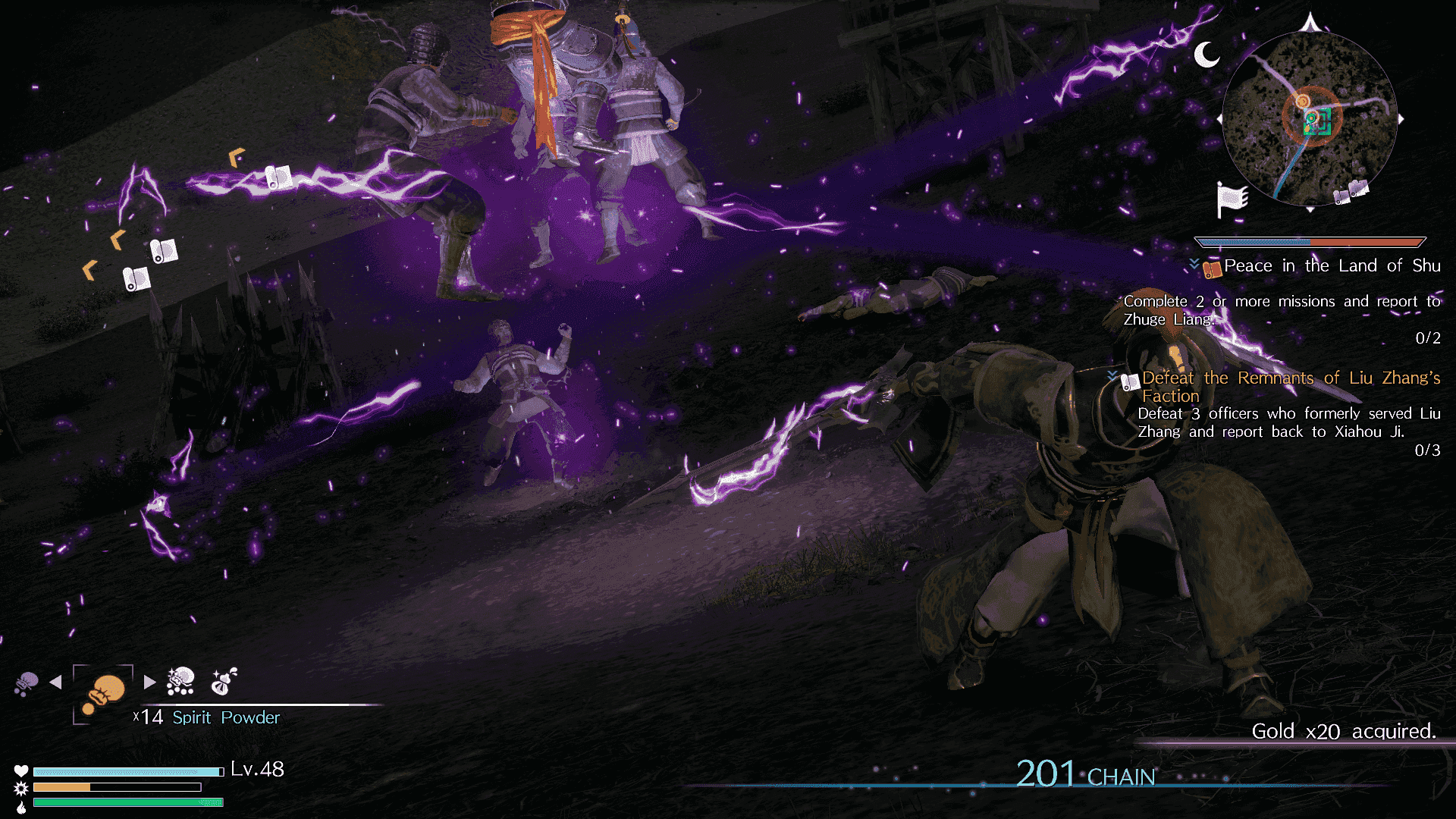 As this is an open world game, exploration plays a key part in it. A majority of all items and equipment you use will be crafted via materials found strewn across China. It’s strangely addictive just running from cluster to cluster collecting resources and exploring the map. It’s pretty huge; I spent an entire night trying to find a resource for a new sword and barely dented the map. One tedious thing about the crafting system though, is having to find scrolls. Unlike resources, which you can track to highlight them on the map, the scrolls required for basically everything seem to be gained fairly randomly. This wouldn’t be so annoying, but you typically need 3 of the same scroll to unlock the ability to craft an item, which leads you to doing a whole lot of praying that something, anything, gives you that third scroll. It’s a simple system, and I don’t think it’s properly fleshed out, but it does the job.

When you aren’t grappling up some Assassin’s Creed style watchtowers to uncover bits of the map, you’ll primarily be roving around capturing villages, towns, forts and any other areas for your army. Mostly the benefit seems to be quicktravelling, but capturing places around your primary objective will lower the level of everyone, which in turn makes it easier to complete. I appreciate that many of the major events still have all of the floods, fire attacks, ambushes and what not, the game loses a significant amount of depth by making them at-your-leisure sidequests. A typical Dynasty Warriors game will pile on all sorts of objectives, and it’s up to the player to accomplish them without the entire mission cascading into failure. Fast forward to 9, and now you can do these side objectives at your own pace. There’s no real rush, none of the missions, nor the main objective, are going anywhere. You could release a floodgate, go hunt some tigers, stop for a bite to eat in a town across China, kill some bandits for a peasant, and then return to capture your enemies base. This really removes a lot of strategic depth from the series, and ironically turns it a lot more into the simplistic mass murder simulator that many claim the rest of the series to be.

There’s all sorts of neat ideas for this open world they’ve built, but none of it feels necessary. I mean that mostly in the sense that you could completely ignore all of it and be just fine. Despite that, I do have faith if they try again they could easily flesh out everything they tried and make a truly great experience. As it stands, things just feel fairly meaningless, and unpolished. 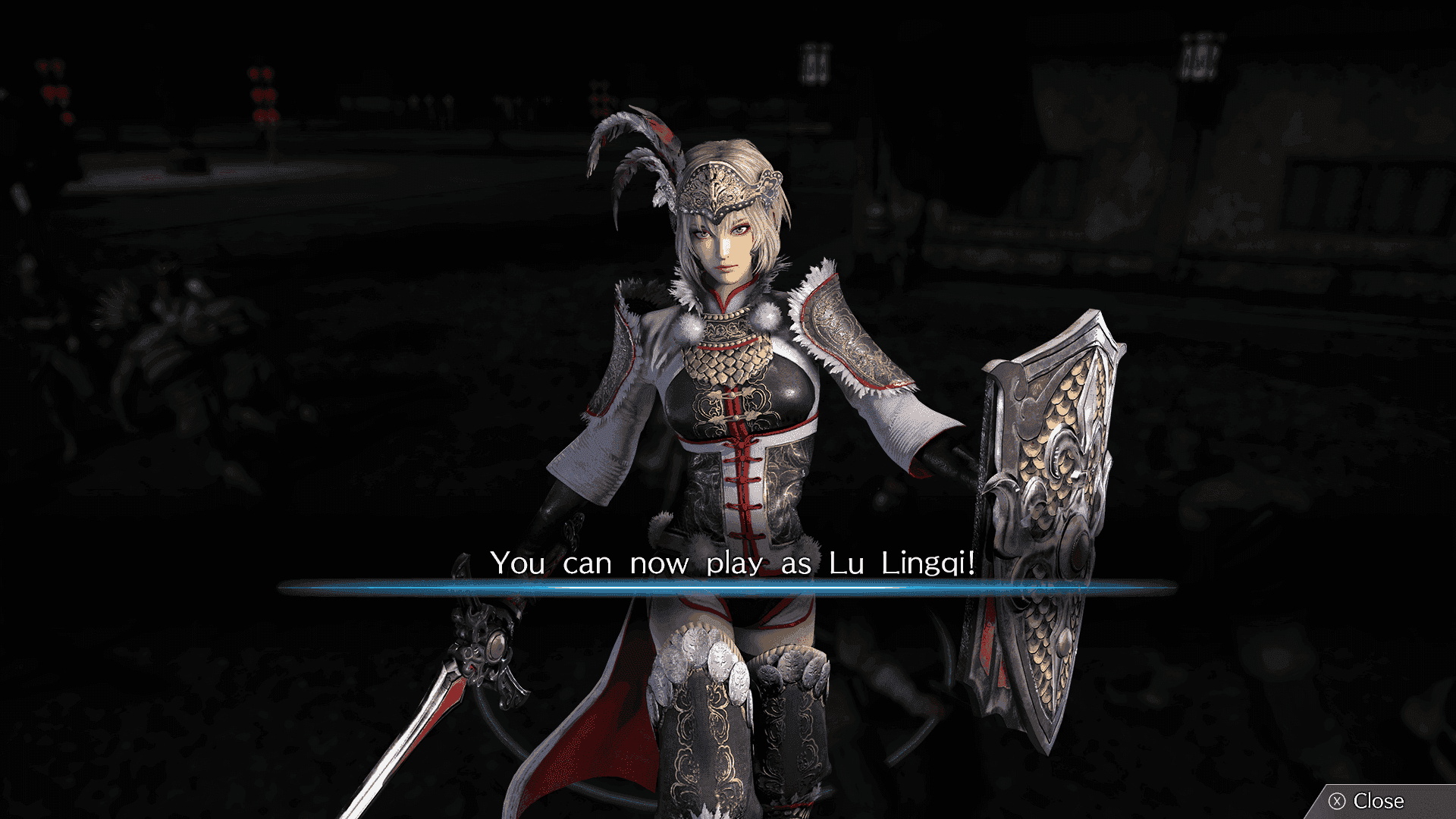 A Vision of Peace

Dynasty Warriors 9 is a bit of a mixed bag when it comes to its graphical fidelity. It does well where it counts though, I’d say. Characters are all very unique and incredibly well designed. Weapons also look quite nice, especially the higher tier ones. A lot of environments tend to look bare, and they are, but there are still many vistas strewn about the map to see. Most of the towns and forts feel very copy and pasted, with little, if anything, that distinguishes them from each other. Larger towns suffer from this as well, but several do at least try to be unique. Overall, the game seems to suffer from the same thing as most open world games -- feeling very empty.

Music at least, is as good as it has always been. Not a whole lot to say, the music in the series tends to remain ever constant. It does well blending in perfectly with the action and never seems to stick out. 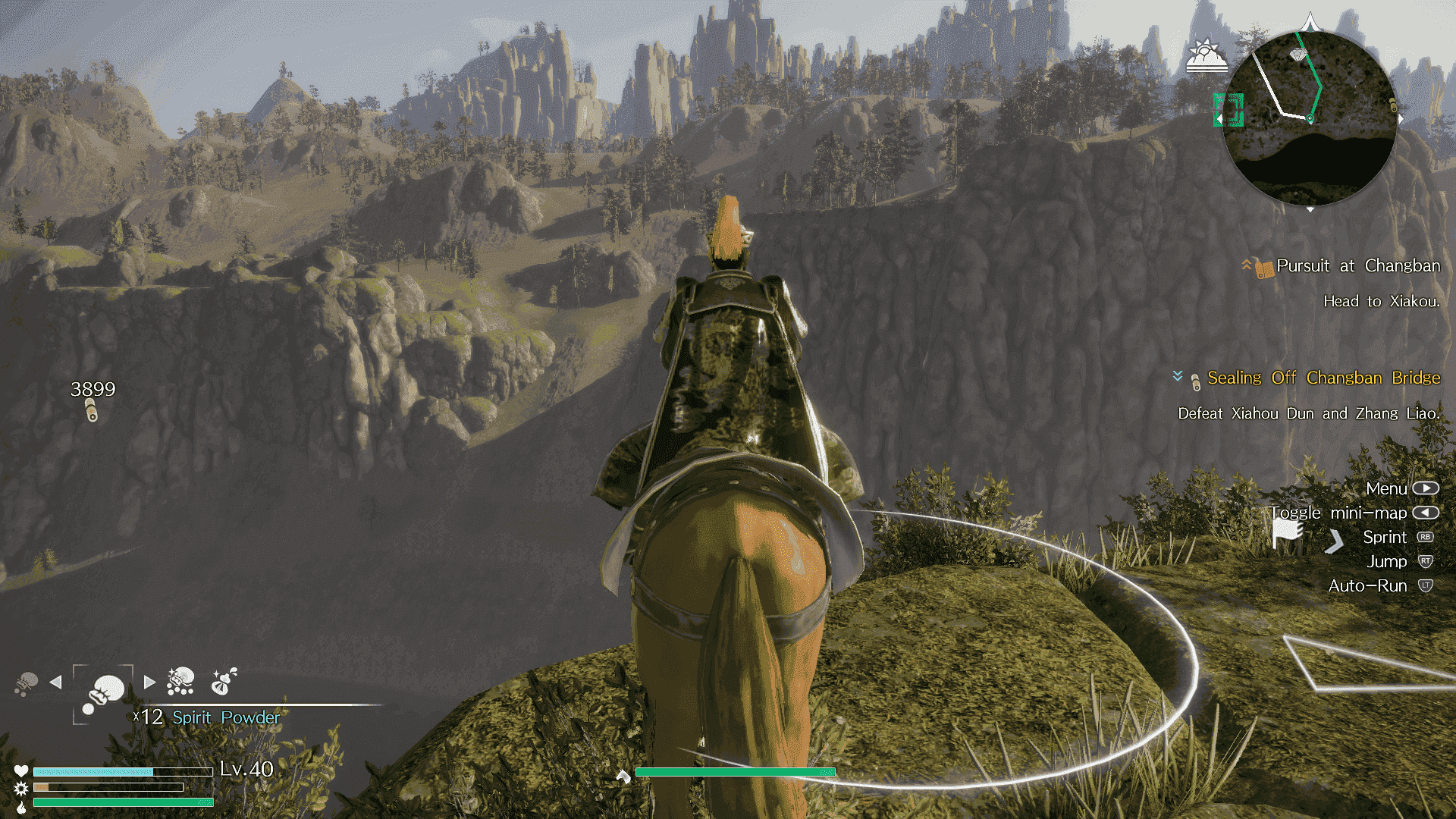 There are quite a number of graphical bugs I noticed throughout the game, however, most of them were pretty minor. Flying soldiers during cutscenes, a broken watchtower with a waypoint about 30 ft from where it should be, and some very strange invisible walls are a few examples. Again nothing really game breaking, aside from getting stuck between a rock and...another rock, a few times. But it did contribute to a continued feeling that the game really lacked polish. I’d say it could have used some more time in the oven, especially when combined with my previous note about mechanics not being properly realized.

Despite a lot of complaining, I have to say I very easily sunk 30+ hours into the game, and could see myself sinking a lot more to complete more of the character stories. I spent a majority of my time with Liu Bei, and only dabbled with a few others for the purpose of this review. A lot of effort went into telling each characters story, and I can appreciate that. It’s very enjoyable. Thanks to the refined combat system, even if it is a bit more simplistic, it’s still a blast charging through hundreds of enemies and slaying officers to further my ambition.

Verdict
You, Chary, d3vilRed and 5 others like this.
Unlike this review