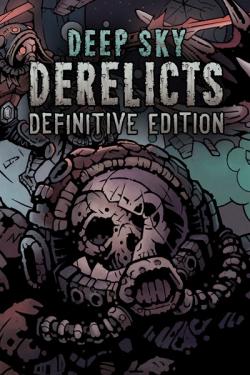 ​
DEEP SPACE EXPLORING: STORY
Deep Sky Derelicts takes place in a world where mankind is split into two groups: the wealthy, privileged class who get to live in comfort on planets, and the poor lower class who are forced onto space stations called derelicts, scavenging and struggling to survive. The story follows your group of scavengers as you’ve been tasked with finding information leading to an ancient, legendary derelict called the Mothership. And that’s about where the plot ends, honestly. It’s a simple story, but it serves mostly to give you an excuse to go out into space, find derelicts, and explore them. The game is more about the journey than the destination, and it works for what it is. 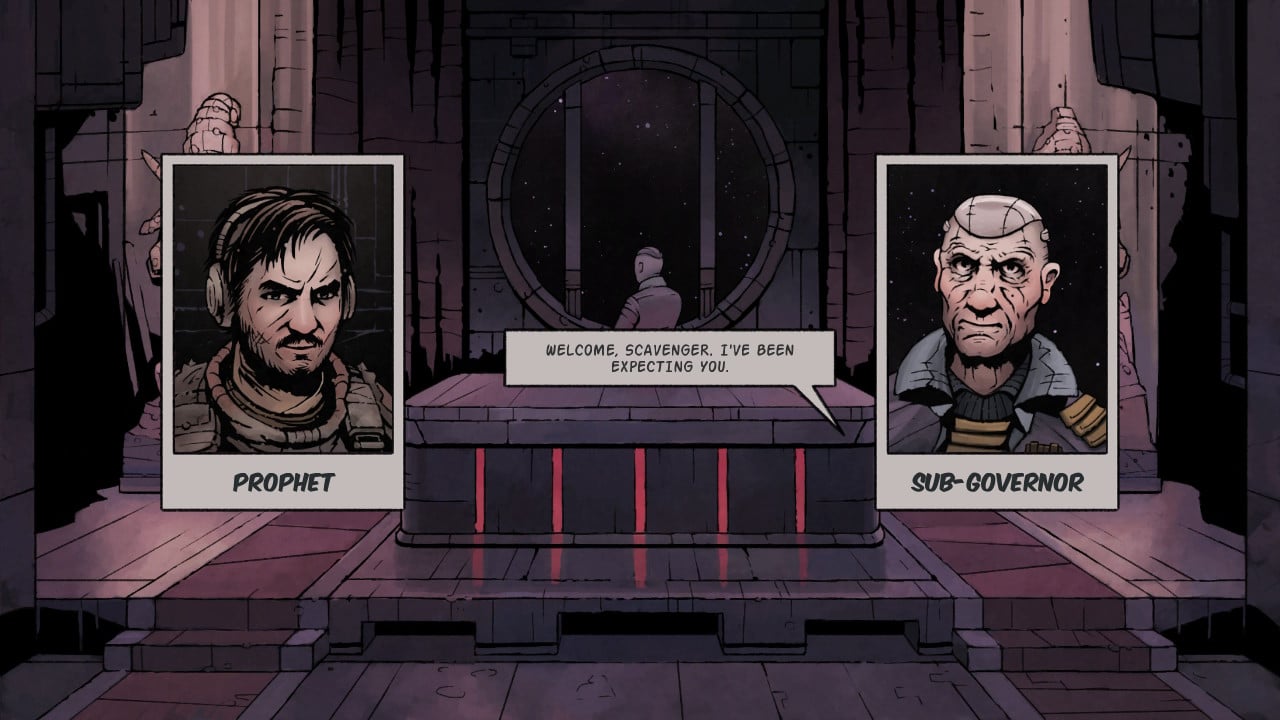 ​
Your characters are almost totally customizable. You start with a party of 3, which you can customize in title, class, and appearance. The class you choose will determine what your character's stats are, which can be upgraded as you level. You can also spec out your weapons and tools with different mods which give you new cards for combat, and upgraded stats. This level of customization is a welcome addition, and really makes each character feel unique. Outside of this, there are different mercenaries you can hire if one of your characters die, as this is a roguelike game where death is permanent if you don’t resuscitate quick enough. 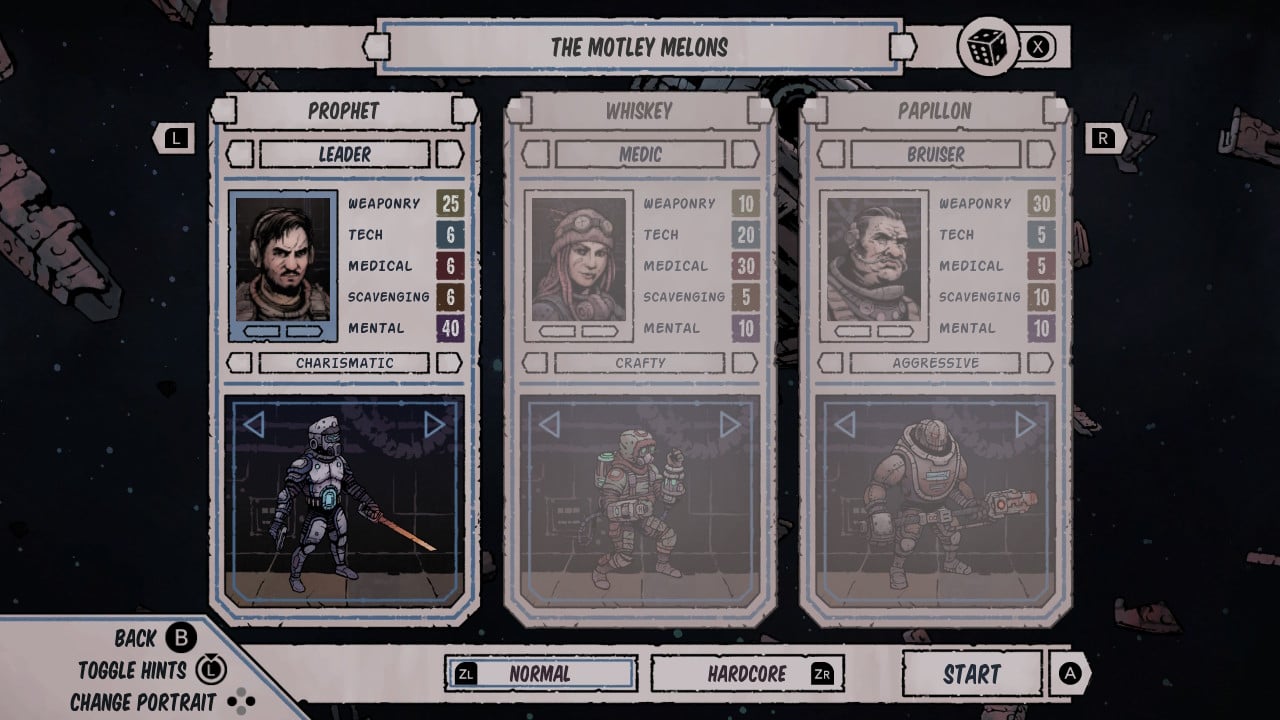 ​
Outside of the story, there’s side quests that you can pick up on each derelict. These give you XP for leveling, and mods for your weapons and tools. There’s contracts you can pick up in the scavenger hub, which are essentially just fetch quests to get you to explore more derelicts. The contracts give you both XP and money. You can use your money to buy energy for traveling & combat, tools, and mods for your weapons. Finally, there’s scavenging. Certain areas in the derelicts will have loot to collect, either simply for reaching it, or for defeating enemies. The loot ranges from mods to high and low quality junk that you can scavenge and sell, as is your team’s profession. There’s plenty to do, highlighting that you don’t need a complex story to have fun.

​
The visual aesthetic for the game is that of a comic book and, I have to say, it looks really good! Everything has a really cool hand-drawn feel, and the stylization has a consistent, grungy, sci-fi aesthetic. In dialogue, individual portrait panels with speech bubbles overlay the static backdrop of the level to match. This is taken to the next level in combat, where all moves and turns take place in a pop-up action frame. For something so simple, it works really well. It’s easily my favorite part of the game. 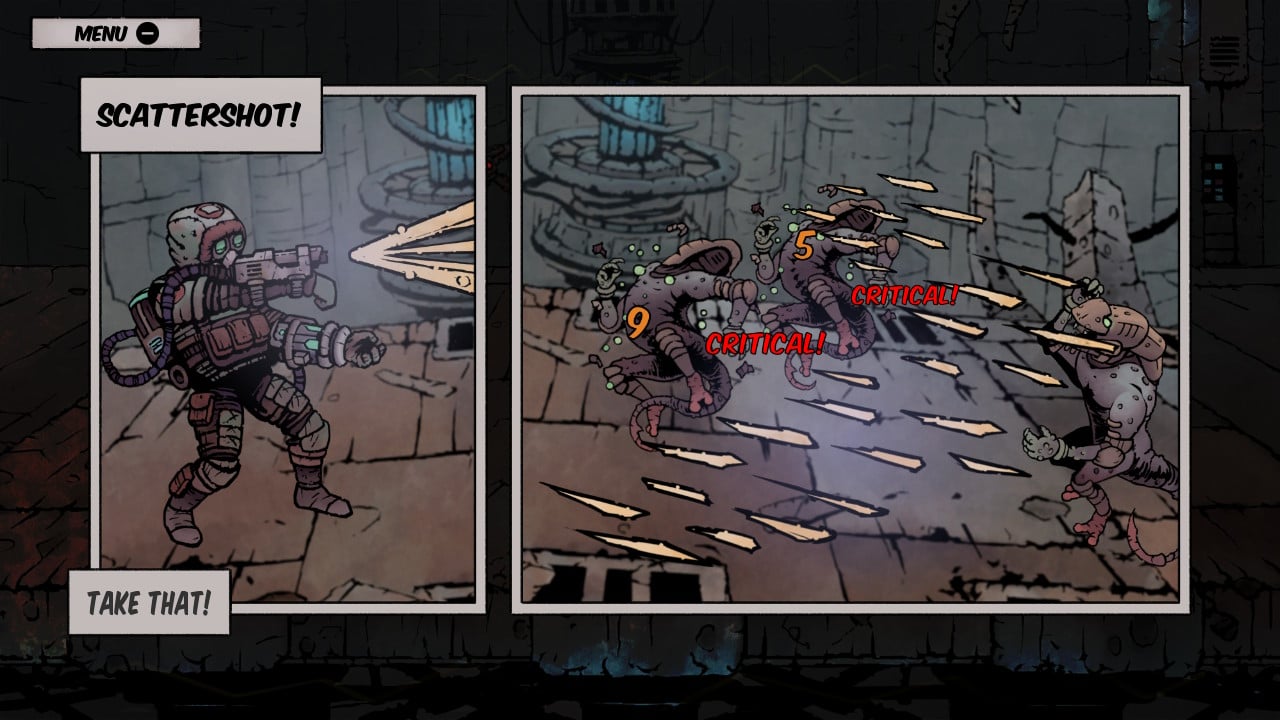 ​
SPACE SCAVENGERS: GAMEPLAY
The game is a combination of a turn based RPG and a tactical card game, with a bit of dungeon crawling and roguelike elements thrown in. You use energy points, or EP, to travel to each new section of the derelict, which can be refilled via energy cells that you may find in loot, or at the pawn shop in the overworld hub. The derelicts start out, well, derelict and barren, with exploration being the primary way to map out the area. You can use some EP to perform a scan of the surrounding area, which will highlight any points of interest you may be near. It’s a welcome tool to help save some time and EP. Otherwise, good old fashioned dungeon crawling is the only way to chart out the map and find points of interest, which you’ll need to do both to raise funds and complete quests. 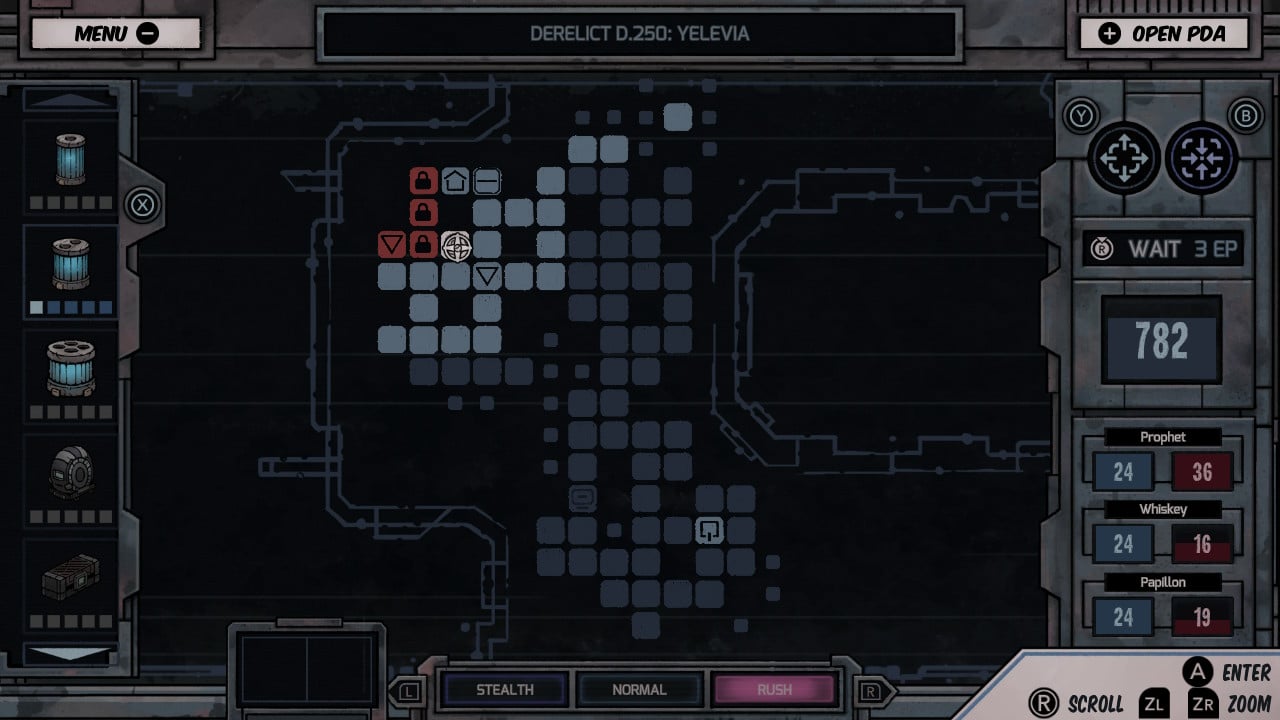 ​
Honestly, I have some issues with the exploration. Unlike other RPGs that give you a map to follow as you explore the dungeons and environment, Deep Sky Derelicts does all of its exploration in the map, only putting you in the actual environment for combat and dialogue. I’m not a fan of this, and in parts believe it’s a missed opportunity. The hand drawn sections look so good that it’s a bit boring, comparatively, to explore via an area map. On top of that, for most of the derelicts, the areas where you do get to enter are usually just recolored versions of the same areas. That said, the areas still look good, and you never go too long without finding a point of interest. I just can’t help but wish we’d get more environments, and less maps. 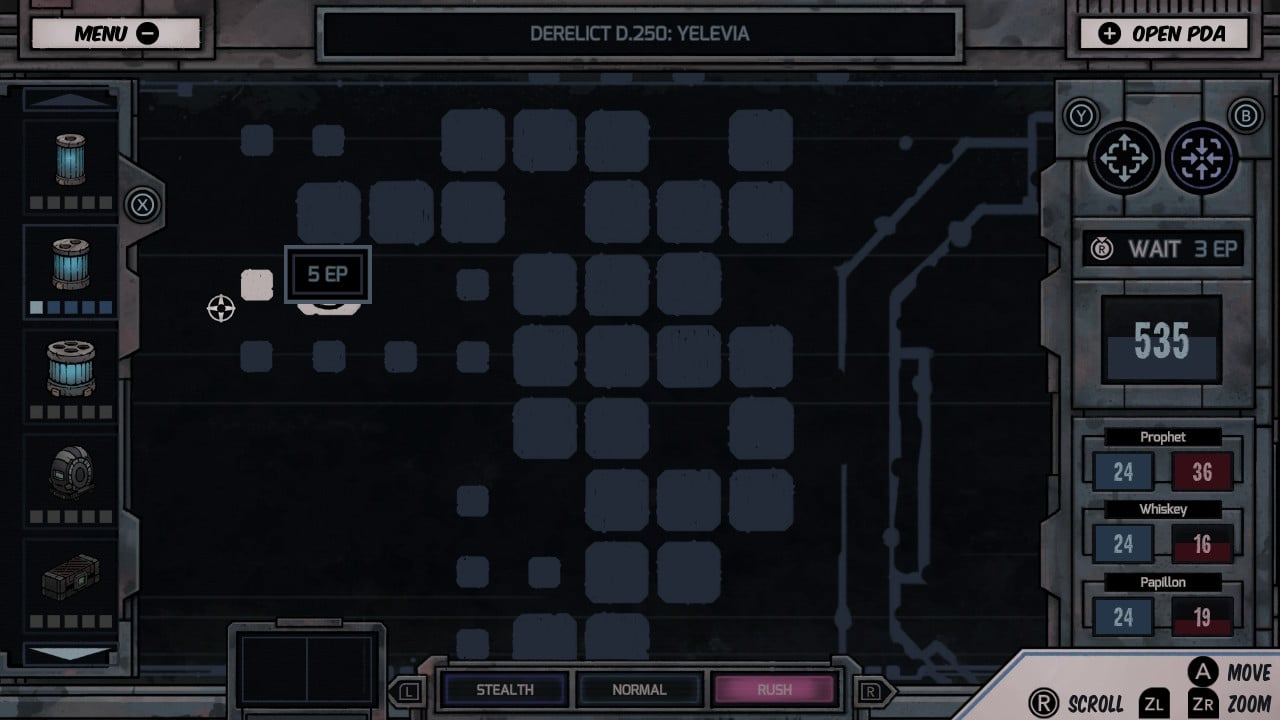 Combat is turn based, but with a unique twist. Each character has a deck of cards that they draw from, and during their turn, use those cards to perform the action described on it. Some cards allow for attack, others offer buffs for allies and debuffs for enemies. It adds an extra element of RNG to combat, which keeps it fresh and entertaining, and keeps you from getting burnt out, just reusing the same strategies over and over. The decks aren’t very big, so you’ll reliably draw cards you need to keep combat moving. The annoying part is that you spend 10 EPs at the beginning of each character’s turn, regardless of if they use any cards or not. You’re given the option to pass if there’s nothing to do, but that just results in wasted EP. Pulling energy from the same pool as you need for movement is massively annoying, and leads to a lot of doubling back to refill your energy if you don’t have energy cells to spare. I’m sure this system of spreading the EP thin was meant to inspire a feeling of resource management, hoping to immerse you in the environment. You’re traveling space, and like it or not, you have a limited amount of resources before you have to head back to the home base. In part, it works. But it serves more to annoy than to immerse. 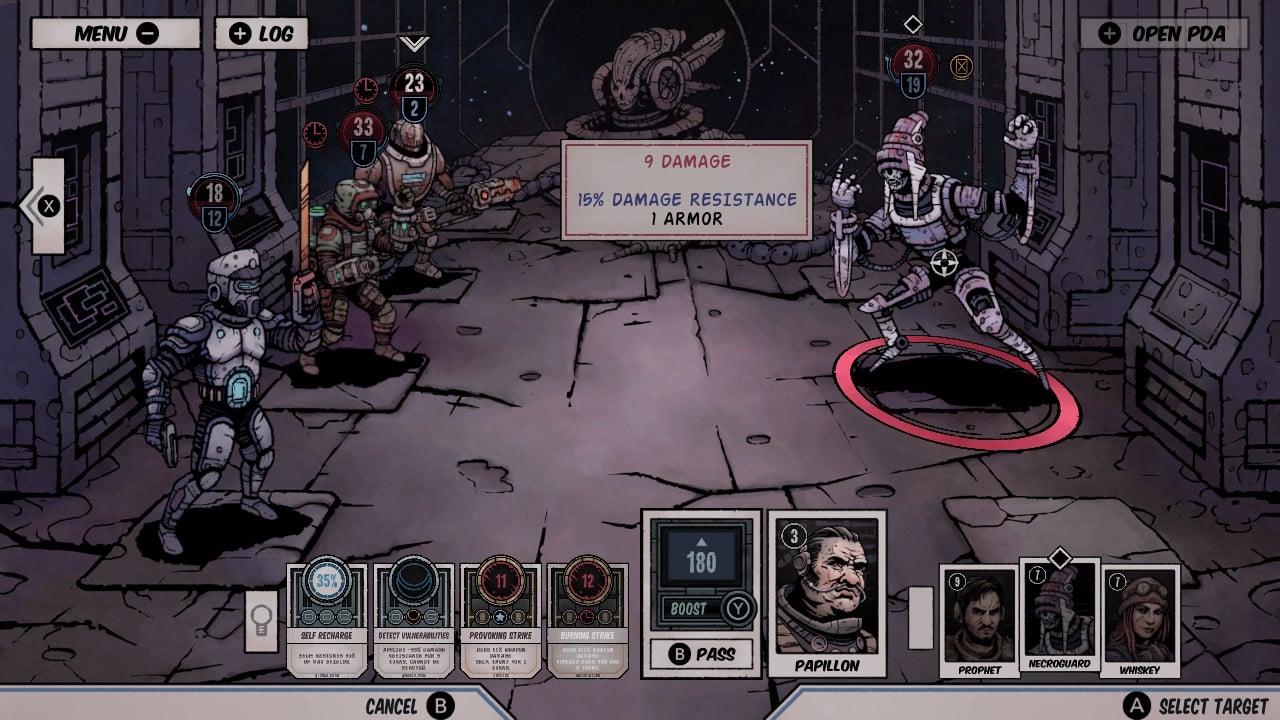 ​
My final issue with the game is that it’s a slow start that just kind of throws you in, and you either figure it out or you don’t. I don’t need my hand held and to be told exactly what I’m supposed to do, but I did have to push myself forward to get to a point where I was enjoying the game. And that’s the biggest issue I have. There’s fun to be had here, and I’m glad I pushed forward. But in my opinion, I shouldn’t have to push myself to enjoy a game.

What We Liked ...
What We Didn't Like ...
7
Gameplay
While the exploration can be a bit of a bore, combat is incredibly addicting. The card based gameplay makes each encounter different and fun, and I can't deny the sense of accomplishment that comes from getting through an entire derelict.
8
Presentation
For all of my problems with Deep Sky Derelicts, it's presented in a beautiful package. The artstyle is something I haven't seen handled this well in a lot of games, and they fully commit to it in the best way.
5
Lasting Appeal
With boring exploration and a lack of compelling story, Deep Sky Derelicts doesn't keep me wanting to stick around very long. The combat mechanics do keep interest for a good while, but there's not much making me want to come back to it.
7
out of 10

Deep Sky Derelicts is a decent little adventure that cares more about the journey than the destination. The problems are enough to keep me from loving it, but the combat is addictive and the exploration, while annoyingly simple, rewarding. If you’re a fan of roguelikes, dungeon crawlers, or sci-fi RPGs, it’s worth checking out.
Reactions: T-hug and Ericzander
Share:
Facebook Twitter Reddit Pinterest Tumblr WhatsApp Email Share Link
So, it's just Nth Darkest Dungeon clones. Kinda reminds me of Musou games. Just swap some assets and new game is ready
Reactions: RyRyIV

So, truth be told, I never got to play Darkest Dungeon, but there definitely seems to be similarities. I’ll give credit where it’s due, the aesthetic here is incredible, and I love it. So even if it’s a Darkest Dungeon clone, at least it’s one that took some creative liberty
There are similarities, but as someone who owns both games with all dlc they're actually pretty different in a ton of ways. Yeah they have the same party style and sort of similar exploration, but they really made it their own thing entirely
Reactions: T-hug and RyRyIV

@ gudenau: What are you supposed to do when you have a thousand dollar piece of hardware that won't work... 25 minutes ago
Chat 2