We’re in England in the 1950s, and a night-time tragedy occurred: the kidnapping of Charlotte May. What’s more puzzling is that Charlotte is only 8-year old and no ransom has been made by the perpetrator. Who would want to harm a child and why?

Among the inhabitants of Dahlia View is Robert Conway, a retired private investigator. After talking to his neighbors about the case, he learns about their  own distrust towards each other, painting each one as the potential kidnapper. Intrigued by this mysterious disappearance, Mr. Conway decides to don his detective hat once more and carry his own little investigation while the police carries its own.

But unlike the latter, Robert’s resources are limited to his wits and a camera. Nevertheless, this leads Robert to unravel the sinister side of Dahlia View and its inhabitants. Will he find Charlotte May? Is she even alive? And what about the criminal? These are answers you will need to uncover in Conway: Disappearance at Dahlia View. 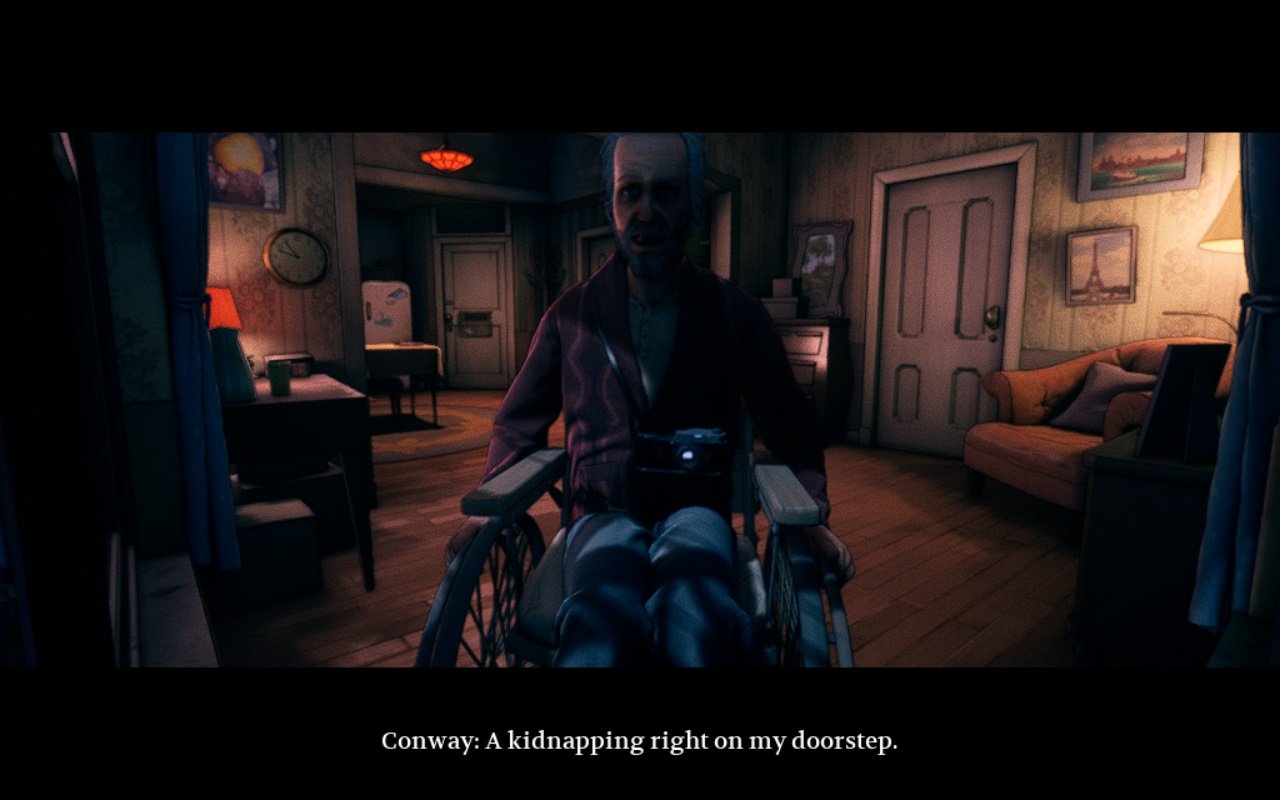 With Conway: Disappearance at Dahlia View, White Paper Games delivers an original story-driven mystery plot for the most part. We have a retired PI bound to a wheelchair as protagonist who can only investigate his surroundings and take pictures of potential clues. Even if the cast is limited to 6 NPCs, each has a unique personality of their own. And most of them have a darker side to them that Robert Conway discovers during his investigation. And in doing so, we receive ample exposition about their actions and motives.

The cast is further brought to life with the professional voice acting which complements their individual character. In addition, the overall cinematic presentation adds to the ambiance of an interactive thriller. 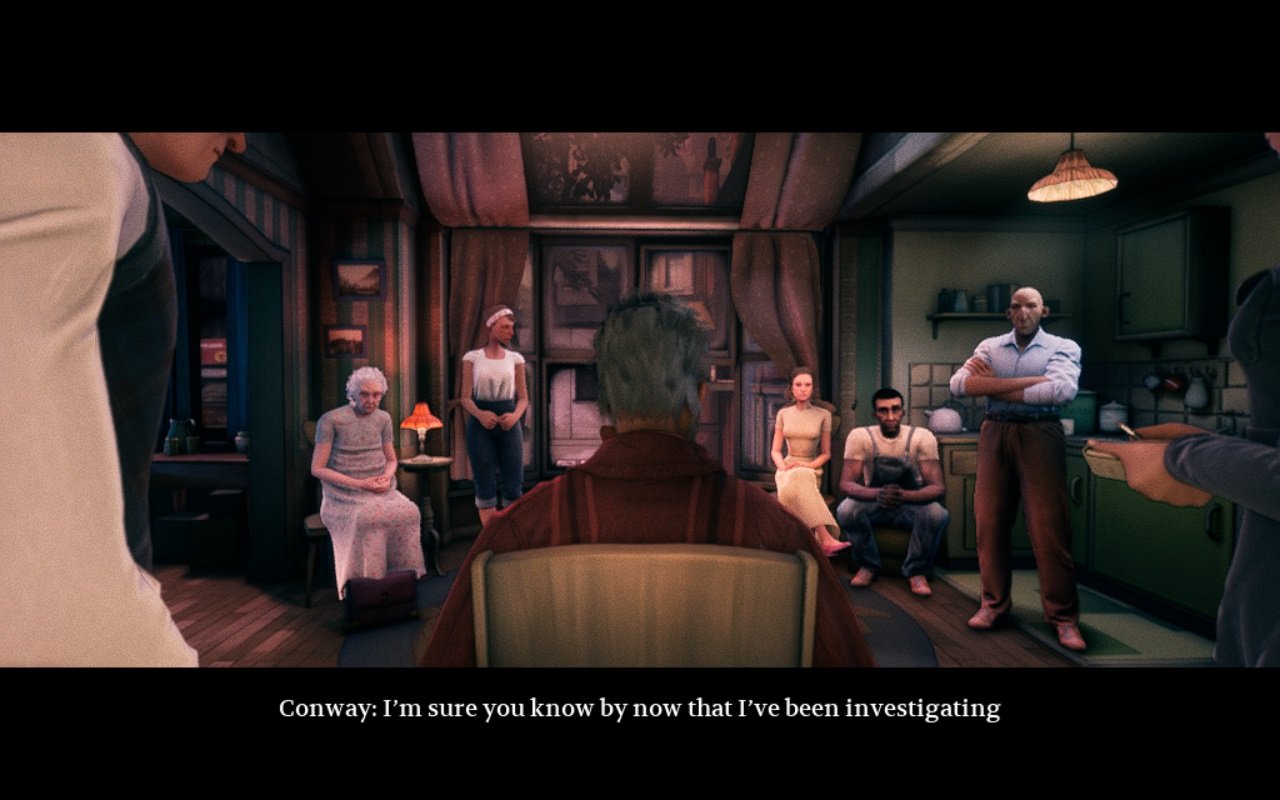 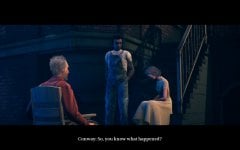 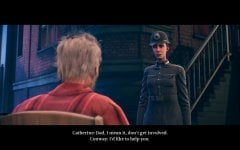 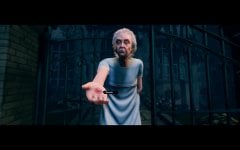 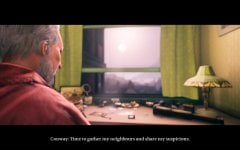 However, the narrative often suffers from predictable story beats. With some minor guesswork, you can easily figure out who is having an affair with whom and why a character is being secretive. And while the reveal of the culprit is intended to be a major plot twist, I correctly guessed who it was within a few minutes after booting the game (but it might be just me though).

In addition, some of the plot’s segments feel anti-climatic. Towards the latter half of the game, several segments could have been elaborated upon in a quick cutscene (the game is no stranger to cutscenes) but are left to the player to guess.

As for our protagonist, his character seems to be a bit rough around the edges. For a former PI, Robert Conway seems to be quick to jump to conclusions during his inner monologues. I get that this might have been done on purpose to throw the player off but this does not give the impression of a very quick-witted detective. His background also remains mostly a mystery and his habit of nosing around and intruding into other’s privacy almost paints him as a rude pensioner. 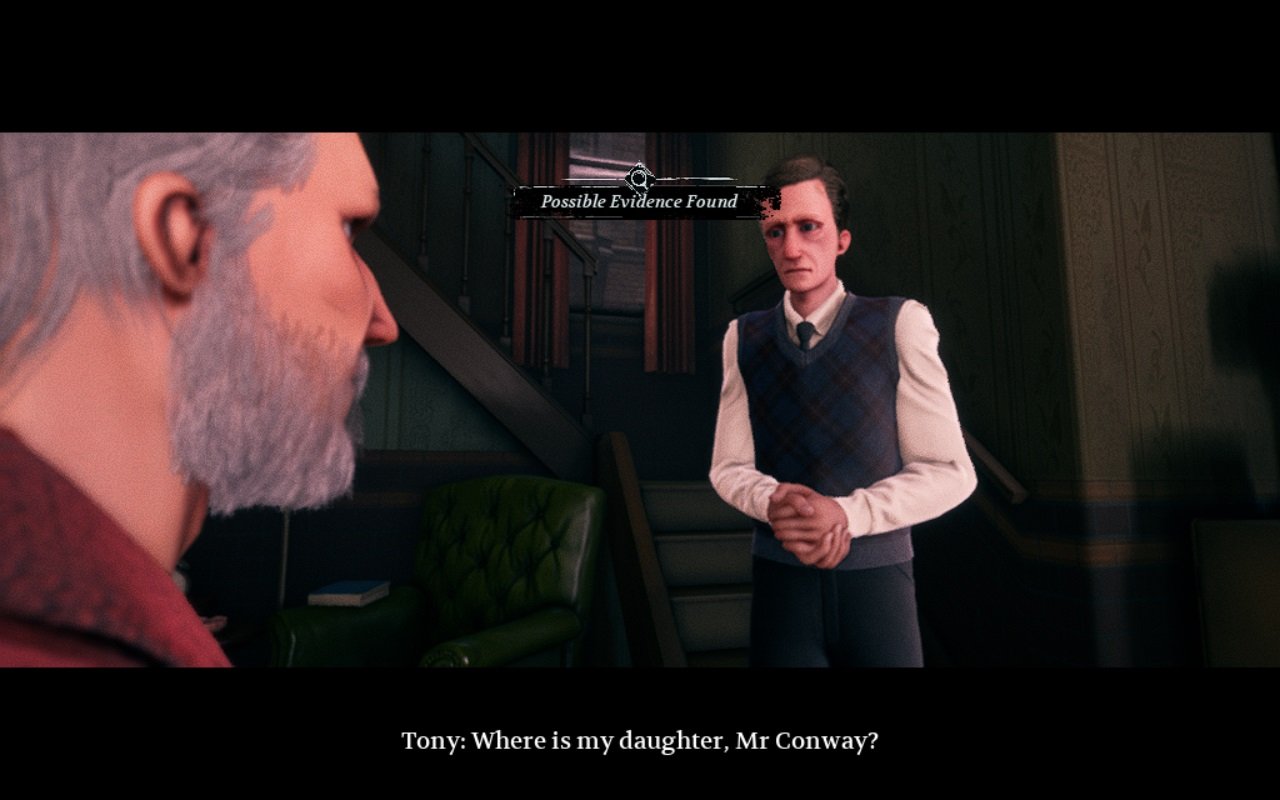 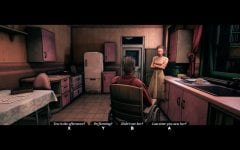 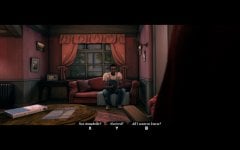 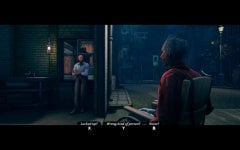 While the narrative is the focus of Conway: Disappearance at Dahlia View, you will also have to help Robert to unravel the mystery at hand. The gameplay is a mix of exploration, point-and-click and the expected puzzle segments. One of the game’s striking elements is Mr. Conway’s iconic camera. However, this gameplay mechanic is only made use of sparsely. Before investigating a particular neighbor, you will use the camera as a binocular to keep tabs on them and snap a picture when prompted with a yellow frame. While investigating, you might also be prompted to take pictures. Those shots will then be used after concluding a particular investigation into a neighbor and you have to match the clues on the evidence board. It’s a solid concept that works and is not bad in practice; but is a concept that I wish was put to use in a more active or less hand-holding manner. 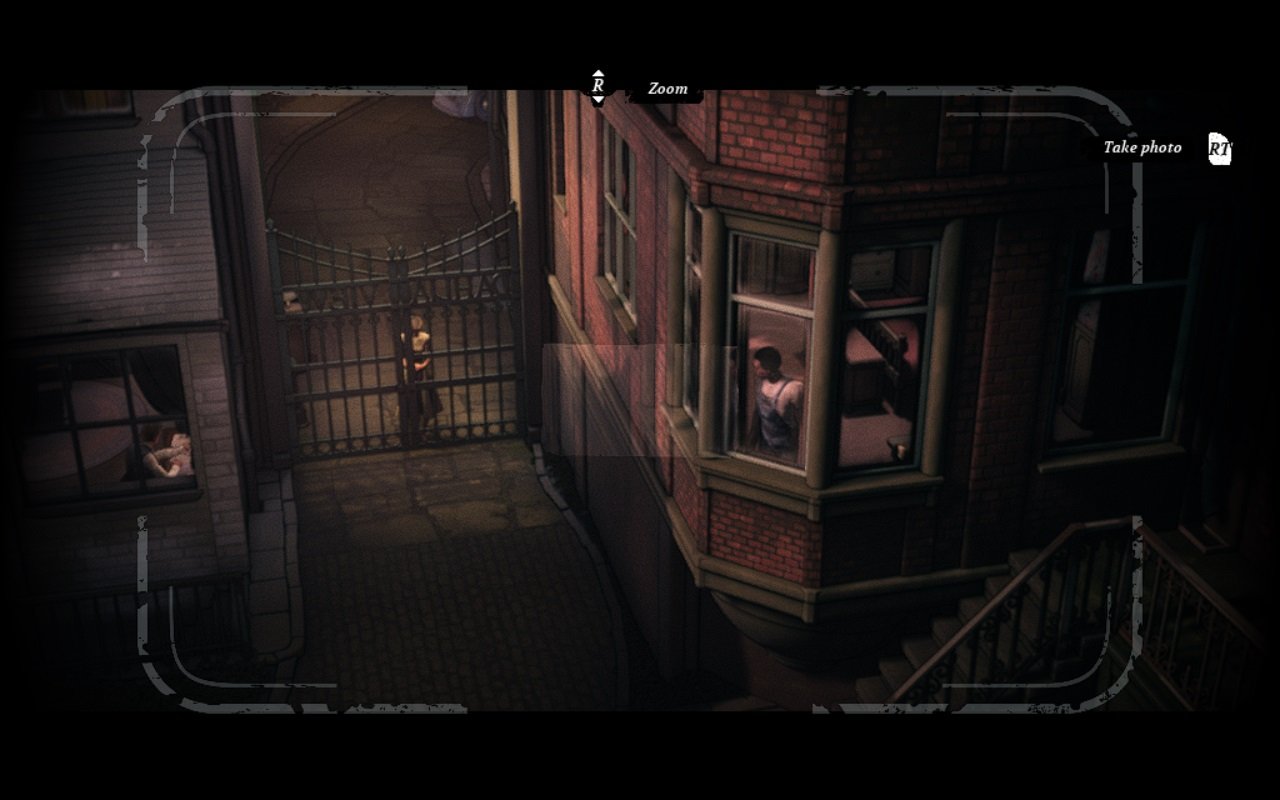 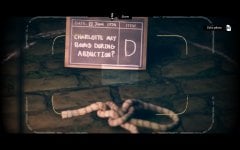 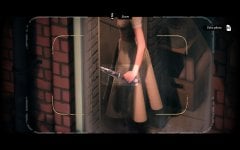 What you will be doing mostly during your investigations is exploring every nook and cranny for clues. You will get prompts with environmental elements with which you can interact with in a point-and-click fashion. And while some are there to throw you off guard, it’s worth keeping your eyes peeled to collect items to progress. These items will be used in puzzles which are each original and rather elaborate.

Challenge in Conway: Disappearance at Dahlia View lies in these puzzles but these don’t pose much of a head-scratcher. While you might miss some clues that are small to pick, most of these will require you to look within the area you are in, making them more approachable. Once you find parts you need, you'll know what to do. 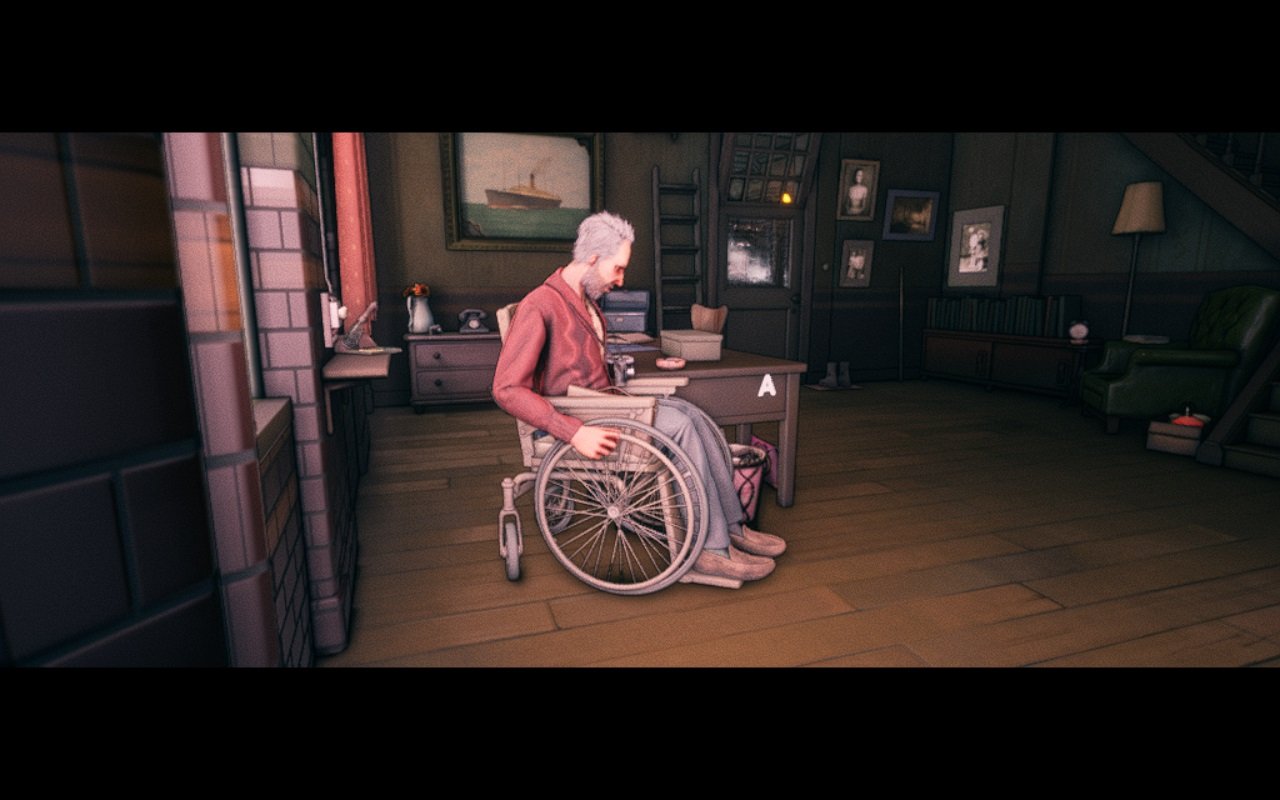 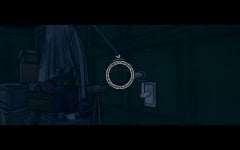 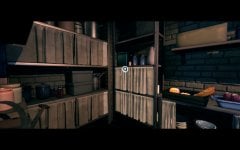 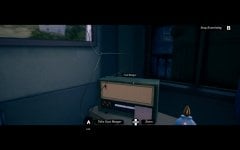 The most challenging aspect by far is when you go to the evidence board after completing a particular investigation. Like a true detective, you’ll need to link the evidence to your observation with pins and red thread. To successfully link them, you will need to be quite observant. But more than challenging, they can also be a nuisance as you can have a lot of evidence that you need to go through. 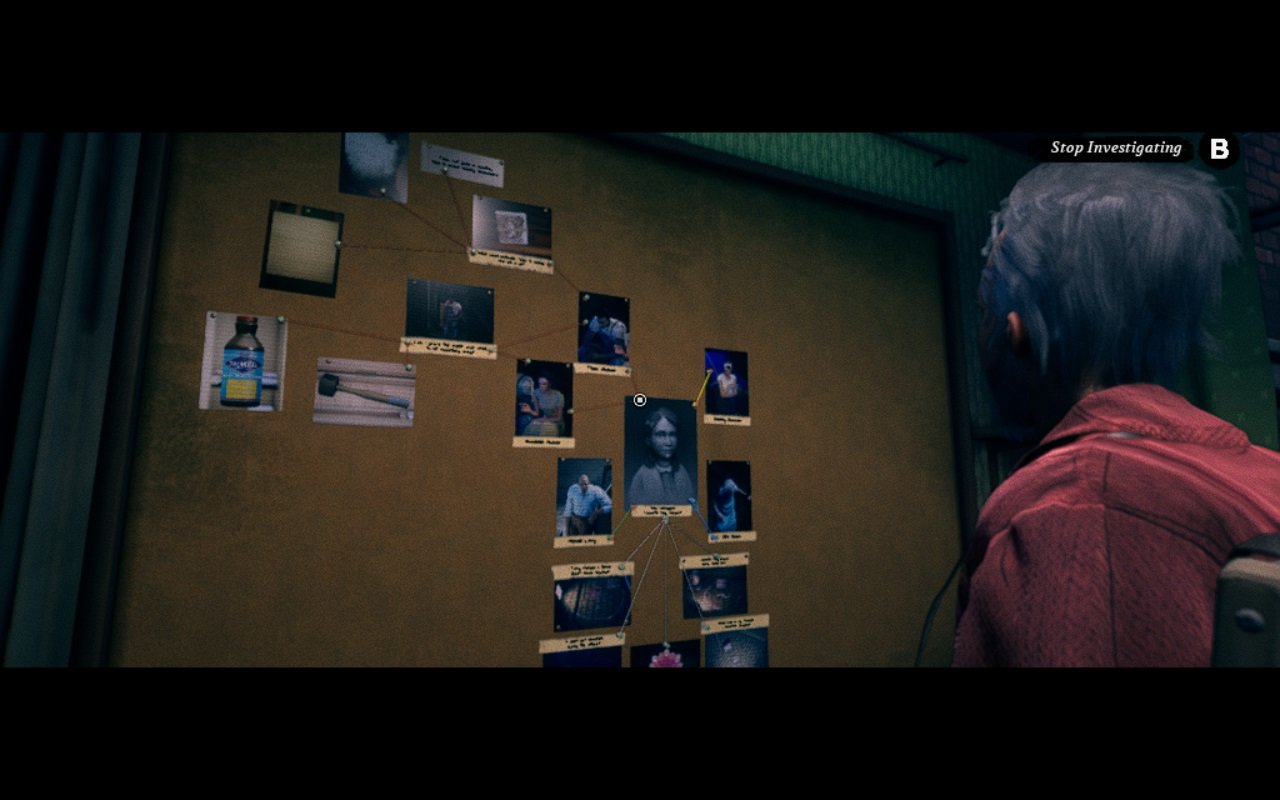 While I was able to play the game from start to finish, my playthrough wasn’t without its rough edges even after the official release. Several bugs persisted like in the Doerr Manor, I could not find prompts. And in an earlier segment in a basement, I was stuck and couldn't move. Controlling Robert as well could do with some polishing as it felt rather wonky to do so at times.

Despite its shortcomings, Conway: Disappearance at Dahlia View still delivers an original narrative mystery game that could provide a fix if you are looking for a game in the genre to play.

What We Liked ...
What We Didn't Like ...
7
Gameplay
While it packs some original mechanics, they would benefit from being more fleshed out and polished.
8
Presentation
With its professional voice acting and cinematic presentation, the mystery-thriller ambiance is well emulated.
7
Lasting Appeal
While Conway: Disappearance at Dahlia View’s plot suffers from predictable story beats, it still manages to deliver an entertaining experience.
7.3
out of 10

@ Psionic Roshambo: I wonder if she has read the karma sutra... 11 minutes ago
Chat 1