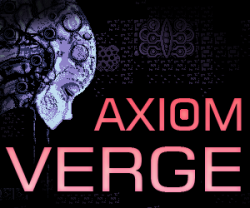 A 16-bit styled blast from the past... glitches and all. That's a good thing, by the way.

What if one day, you were to wake up as a scientist in a strange world, seemingly the only of your kind in all the land? What if its inhabitants were trying to kill you at every turn?
Can you come to terms with repeatedly getting beaten to a pulp, savagely murdered by strange, gruesome beasts, but always coming back to life, memories intact?

If someone told you that you were their last hope to be saved from certain death, would you help them?
What if you didn't know what had to be done, but knew that doing it was also the key to your own self-preservation?

What if your name was Trace, and this was your story?

Axiom Verge has been hyped here and back, with endless hope that it is going to be an amazing game, bringing glory to the 16-bit era in an age where framerate, HDR, and 4k are the selling points of games and consoles alike. Maybe the old-schoolers would get to relive the heyday of their Super Nintendo and Sega Genesis, what with having countless elements inspired by Metroid and MegaMan, Castlevania and Contra. Maybe the kids of today's generation, the ones brought up on Call of Duty and Halo and FIFA would get to experience a game like they've never seen before, a throwback to when things were simpler but simultaneously infinitely more difficult - the makings of a true Metroidvania styled game. Whatever the case, Axiom Verge proves to be a love letter to days past, an example of true dedication and hard work by sole developer Tom Happ. A game that has been in the works for over five years, Axiom Verge has had all aspects of the game, from story and score to programming and art, all designed and implemented by a single individual. Partnering with former Nintendo executive Dan Adelman for marketing direction, Axiom Verge is due out March 31st, 2015 for PS4 in North America (ESRB: Teen) and April 1st, 2015 in Europe (PEGI: 12). When asked if there was any information about the PS Vita and PC releases of Axiom Verge, Dan informed me that there's currently nothing that can be said on the matter other than that it's a few months out and more information will be available soon. The game will be priced $20 USD on release on the Playstation Network store.

Being a Metroidvania styled game, you're placed in your standard 2D sidescrolling platformer world. Controls are fairly straightforward, movement is controlled with the d-pad or L stick, X is used to jump, □ is used to fire your currently equipped weapon. The R stick is used to switch weapons through a linear list or weapon ring, and L1 can lock your movement so you can aim and line up shots without moving. Weapons can be bound to L3 and R3 as a sort of quick select mechanism, though I found this mode particularly difficult to get used to, especially when using the weapon ring mode. I suppose if you used the list menu then the weapon quick keys could be useful, but due to the fact that you can develop a strong sense of muscle memory with the weapon ring I really feel that's the superior weapon select mechanism. There are a few other items that bind to other buttons however they are unlocked through game progression and I don't want to get carried away with the spoilers just yet, and there is also quite a large selection of weapons to help get you through every situation you might come across. When you consider that one person has created every single aspect of the game, it's unreal to see how beautiful and meticulously designed the game world is. The graphics are stunning for a 16-bit styled game, especially so in the outdoor segments (upper portion of the overworld map), the music is phenomenal and varied and always fits the atmosphere of the world it's in, sound effects are spot on, character and enemy design is wonderfully detailed for a 16-bit styled game and they range from small little bugs to giant multi-legged hoppers and humongous screen-filling bosses. In all, the general game design feels simultaneously old-school yet extremely fresh, which really is great when you consider how saturated the indie game market is with 8 and 16-bit styled retro games. One of the neatest things that the game capitalizes on is the ability to, or in some cases the necessity to glitch out or corrupt your enemies or the world around you. Many enemies can be corrupted to either become beneficial or at least less harmful than their standard form, while in some areas the world needs to be decorrupted to progress to a new area. You gain a device that is upgraded a few times throughout the game becoming more powerful at each step and is subsequently able to corrupt/decorrupt more enemies and objects to help facilitate your progression through the world.

These things really don't look like they should be trusted...; Just showing the scale of one of the bosses, who fills the room;

What glitch-based game would be complete without a MissingNo?; These silverfish-creatures can be corrupted into non-harmful platforms

From the profile select screen, you can see that the game tracks map discovery and item discovery percentages, incentivizing the completionists among us to scour the world for 100% completion. With about 13 hours of gameplay on my profile, I finished the game with 74% item discovery and 91% map discovery, and I thought I went through the game with a very fine-toothed comb. There are a few areas that I know have items (and thus unexplored map areas) that I do not have the ability to get yet, however those items and areas make up 26% of the items and 9% of the game world, so clearly there's even more to be found than I can imagine. For a 100% run, I can see this game clocking in easily at 20 hours of playtime if you don't look up any outside help like guides and tutorials. For those of us who aren't completionists and would rather beat the game as quickly as possible, don't worry, because Tom Happ had some thoughts for speedrunners too. Axiom Verge also features a speedrun mode, which skips most cutscenes and dialogue sequences in the game so players can get a true feel for what the best completion time can be without needing to button mash to get through all of the dialogue, while also keeping time for your current run.

While this game is positively amazing, nothing can be perfect. Axiom Verge does have some aspects that while not necessarily harmful to the success of the game, they are things that I wish could have been handled differently. For starters, while there is a wide variety of weapons to choose from (I had 13 when I finished the game with many more to find if I am to go by my available inventory space), many of them felt superfluous without much of a reason to use them. One weapon that you find early on in the game, the Kilver, is essentially a short range lightning blast that can be re-aimed before it dissipates, which I would most closely compare to a shotgun. This weapon does quite a lot of damage and I used this weapon throughout a very large majority of the game, including the final boss fight. So even after finding numerous other weapons, most of which had really neat ideas to them, they generally just didn't seem very useful and I wound up sticking with something that was found near the beginning of the game. After giving more thought to this, I think that it comes down to balance. The Kilver is undoubtedly a very powerful weapon to be so heavily usable through the majority of the game, so I think that if the Kilver was nerfed just a slight bit the over weapons might become viable options then. But as it stands, everything else either doesn't do enough damage to compete or is too gimmicky to be considered viable. After this, I've got just one gripe with the controls - fairly late in the game you find a powerup that gives you omnidirectional teleportation, activated by double tapping any of the 8 directions on the dpad (or L stick). When I was trying to rapidly input fine controls to carefully navigate around enemies or obstacles, I found myself very frequently teleporting when I didn't necessarily want to. Granted, not once did it put me in a bad situation, it just threw off my plan for navigating through an area whatever way I had planned. Unfortunately I can't really think of any way that this could be resolved, as by end-game most of the controller buttons are bound to something, and any kind of rate limiting on the dpad to reduce accidental teleports would make it very difficult to teleport upwards through horizontal platforms where you have an extremely small window to actually teleport through it. Finally, the end boss is a bit bland, not posing a huge challenge when even the rooms leading right up to it are fairly difficult and prior bosses took multiple attempts to start getting a grasp for their attack patterns and how to defeat them. Somewhat related to that as well, I wish there was a way to revisit old boss fights other than making a new save file. Being able to do a boss run with all items unlocked or based off the inventory of a save slot of your choice would be pretty sick as it would let you approach bosses from new angles based off of the new resources you may have available.

A powerup has been found; there is some gorgeous outdoors scenery to be discovered.

Axiom Verge managed to take me back to a time where everything was simpler, when my biggest problem was trying to remember if my Sega Genesis was supposed to display on channel 3 or channel 4. I can't begin to count how many times I was blown away by new game mechanics, enemies, or weapons that were introduced. If you have a keen attention for detail, you'll pick up many things along the way that seem slightly out of place but at the current moment you can't do anything about it, or even places where you can see the goal but have no idea how to get there. There are collectibles that I still don't know how to get, and there are places that I'll need to backtrack to explore even deeper to see what else I've missed in the game. Yes, I've found a thing or two to nitpick over that I would have been happy to see handled differently, but this just goes to show that no matter how a game is made, there is always going to be something that someone has a better idea of. And for every person that has something to say about it, there are going to be countless more people on the other side saying they like it how it is. Axiom Verge was a wonder of a game that I still need to put more time in to and further explore. I would without hesitation strongly recommend this game to anyone looking for a solid retro-inspired Metroidvania experience.

Edit - some details I forgot to mention, the game will be Cross-Buy when it comes out, so PS4 players will get the PS Vita version when it's released, and vice versa. There's no definite answer yet as to if the game will also support Cross-Save, it's something that Tom would very much like to do but they are still performing a technical evaluation regarding this and have said that more information will be made clear closer to the Vita version's release date.