Up for review is the Anker PowerCore: Nintendo Switch Edition 13400mah battery pack!

Anker, one of the more prominent and higher end battery pack manufacturers, has partnered up with Nintendo to release an officially licensed Nintendo Switch Battery Pack. Featuring two different capacities, 13400mah and 20100mah, each device is "Optimized for Flawless Compatibility with the Nintendo Switch" as noted on Anker's web page. Boasting up to 10 additional hours of playtime for the 13400mah edition, this battery pack promises a proper battery life for a modern portable console, all in a tiny package. To start, we'll take a look at some of the features of the device as claimed on Anker's web page, box, and manual for the device:

And here are the more detailed specifications for the device itself:

At first glance, the Anker PowerCore is a generally decent battery pack, feature and spec-wise. It includes the USB Power Delivery standard, which provides quick charging capabilities for USB-C devices, as well as Anker's own "PowerIQ" technology that appears to be an Anker equivalent to Quick Charging for standard USB devices that support it. The PowerCore itself has two ports you can charge from, one standard USB type A port that will support any USB device, and a dedicated USB-C port for USB-C devices. I find this to be a tad limiting, if you don't own many USB-C devices to take advantage of this particular port, but as this battery pack is mainly designed with the Switch in mind it's not a real major issue assuming the Switch is the reason you purchase this device.

So let's take a full look at the PowerCore itself. Inside the packaging you'll find the PowerCore, a nice drawstring pouch with the Anker logo, some guides and troubleshooting documents, and Anker even thoughtfully included a 3ft long USB-C to USB-C cable so you don't have to make an extra purchase to take advantage of the PowerDelivery USB-C port. Unfortunately, following Nintendo's recent rather backwards practices, the PowerCore does not include an AC wall adapter in it's packaging...but, as noted on the back of the box, you can simply use the Switch's own AC adapter to charge the device, no problem. The body of the PowerCore uses a dense, rubberized coating that gives the battery pack a rugged and durable feel to it, that feels like it won't get easily scuffed from constant use. The design of the device is rather simple and minimalist: on one face, you'll see the Nintendo Switch logo, and on the other you'll find the Anker logo. With the Anker logo, you'll also find a button that features 8 LEDs that can be used to display the current battery life of the device with a simple push. Size and weight-wise, the PowerCore is quite small, smaller even than my own wallet, and weighs around 9oz which gives it a good, comfortable heft but won't pull your pants down if you plop it in your pocket for a bit. As noted, the device has two output ports, USB-A and USB-C, which have a fair bit of room between them so your cables won't feel too "bunched together" if you wanted to charge multiple devices at the same time. The USB-C port also acts as the Input for the device when charging, and after some tests it appears you can't actually charge the Anker PowerCore and use the included USB-A port at the same time.

What We All Care About: Charge Times

But who cares about all that? Let's get on with the actual capabilities of the thing! The first thing we'll look at is the recharge time for the 13400mah battery. When I received my PowerCore 13400, the battery indicators were at 2 little LEDs (which, as noted in the documentation, is ~25%). Plugging it into the Switch's AC adapter, I found the PowerCore took around 4 hours to completely charge the battery to 100%, which is just a tad longer than the 3.5 hour claim Anker makes, but is rather acceptable for a 13400mah battery. Charging the Switch 0-100% from the PowerCore itself took approximately 3.5 hours, which is about the same as if it charged from the AC Adapter itself. I then tested the device on the Switch with a few different games, some that push the hardware more than others, to gauge how much extra battery you really get out of this 13400mah pack. All tests were done in portable mode, at ~50% brightness, in Airplane mode, with sound off and with both Joycons connected to the system at all times.

Without the Anker Battery:

So, on average, we get anywhere from 3-5 hours worth of battery from the Switch itself, depending on the game, which is about average for the device.

With the Anker battery (please note that all times include the Switch battery life as well as the PowerCore's):

So with the Anker PowerCore 13400, we got around 7 hours worth of extra play time, not including the Switch's battery, with some of the more in-depth games which is well within (and in some cases, above) the 1.7x worth of charge Anker claims the PowerCore can provide. Heat wise, the battery pack didn't seem to push out much while in use. Even after putting the PowerCore in my pocket so I could walk around outside and play the Switch while charging, I noticed almost no extra heat from the device which is quite surprising for such a little thing. The owner's manual does state that, once the device reaches 140F/60C, the PowerCore will shut down automatically, but so far I don't think it's reached even half that on it's own. I tested a few other devices as well, which included charging multiple devices at the same time, and it works as expected for a normal portable charger. I was able to charge my Samsung Galaxy S8 with the USB-C port and the my Kindle Paperwhite at the same time, both managing to re-charge from ~25% each to 100% while the PowerCore only dropped from 8 to 5 LED lights worth of capacity left. My HP Envy x360 has a USB-C port that it can be charged from, but after some tests it appears this PowerCore doesn't push out enough power to actually charge the thing. But, with how small it is, it's basically as I expected.

Unfortunately, despite how great the PowerCore itself is, there is one rather major flaw with it: The Price. The PowerCore 13400: Nintendo Switch Edition currently retails for $69.99 on Anker's own site, as well as various other retail shops, which on its own may not seem like too bad a price for 1.7-2x more Switch playtime. However, Anker themselves offers a non-Switch branded PowerCore with the same capacity for only $45. For 400mah less, you can get the Anker PowerCore 13000mah for $36. For $66, you can get a 26800mah PowerCore that has 3 USB ports and can output 30w total. That is literally double the capacity for $4 cheaper than the Switch PowerCore. As far as I can tell, the Switch Edition PowerCore has nothing special about it beyond using a USB-C port for output (which the cheaper PowerCore's above don't offer) and the fancy Switch logo on the back. I cannot see that little change somehow worth $20-$30 more than a standard PowerCore. To be perfectly frank, you're better off buying the 26800mah PowerCore from Anker and slapping a $1 Switch sticker on one side of it.

Verdict
You, NFates, Sonic Angel Knight and 2 others like this.
Unlike this review 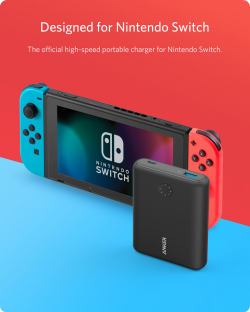