So you want a projector for your brand-new console, to watch the latest movies or your favorite seires but are turned off by the big size of regular projectors? How about a portable projector the size of a soda can? That’s what the Anker Nebula Capsule offers! But how well does it perform?

When I reviewed the Optoma HD143X, the bulkiness of the device and its noisy fan were some of the major downsides that I experienced. Since then, I haven’t come across a projector that fit my liking; one that occupies a small footprint, is less noisy but yet delivers decent image quality. Of course, I could not find the ideal device but the Anker Nebula Capsule came close, so I decided to put it to the test.

When Anker is describing its Nebula Capsule as having a soda can design, the company is not kidding. The projector is literally the size of a soda can standing at 12 cm (4.72 inch) and can easily be confused for one, albeit considerably heavier at 425g (15 oz). However for a projector, 425g is very light, pocketable even. And with its sturdy and quality build, the Capsule is definitely not as fragile as a soda can.

From a design aspect, the Nebula Capsule really blew me away. The audio, which is quite decent for the size of the Capsule, is delivered via a 360° speaker that seamlessly surrounds the lower portion of the projector. This is great as the projector doubles as a Bluetooth speaker blasting up to 30 hours of non-stop music and can be turned up loud enough to overcome the fan noise. 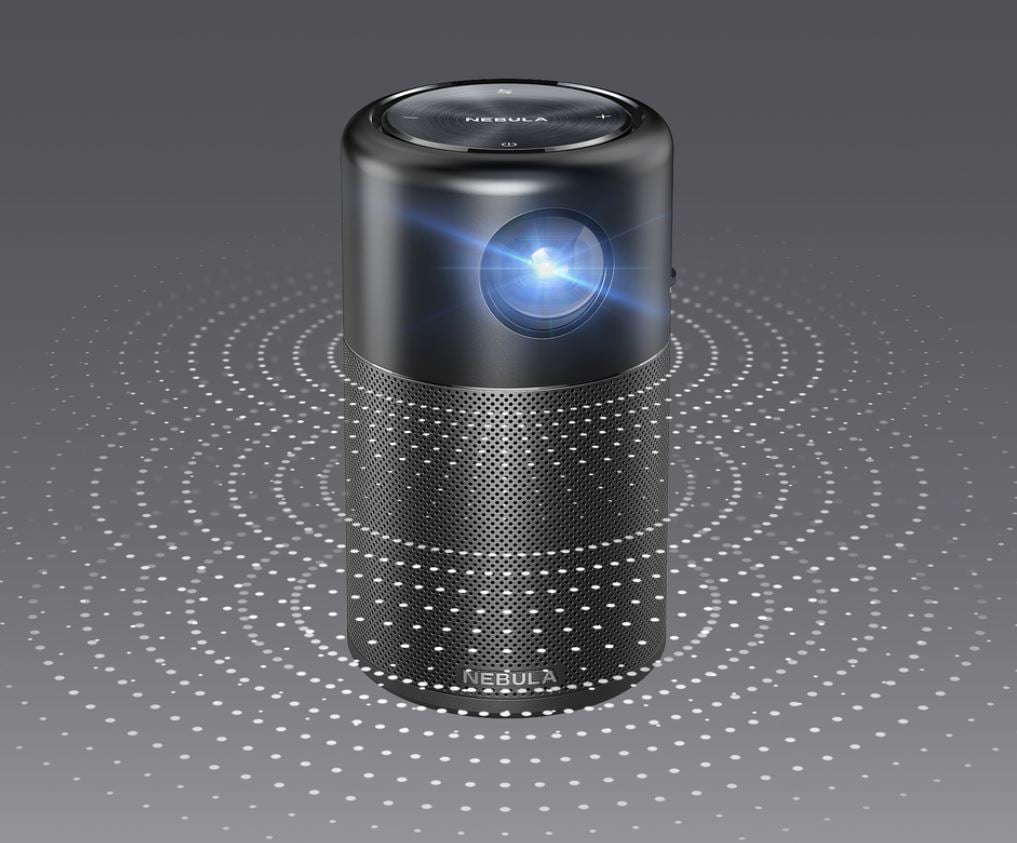 Oriented rather vertically, with its lens located near the top of the device, the Capsule does not require any additional stand in most cases as is the case with most horizontally oriented projectors (usually they would require some kind of kickstand on top of the table or shelf they are rested on). It’s no wonder that this device won the 2018 Red Dot Award for its design.

There is also a tripod screw mount at the bottom of the projector should you feel the need to use a tripod stand.

Before diving into detail on the functionality of the Nebula Capsule, you can take a look at the specs below. They will be further discussed as you read through the review.

When it comes to controlling the Nebula Capsule, you have access to the volume, power and mode switch buttons on top of the device but there is also a handy battery-powered remote control included that is very slim and light. Should the battery die, there is an even handier smartphone companion app, the Nebula Connect (Capsule Control), available for both Android and iOS devices that turns the user’s phone into a remote control.

To adjust the image’s focus, there is a knob on the left side. However, I deplore the inability to adjust the brightness. While the 100 ANSI lumens of the Anker Nebula Capsule does deliver a decent image quality, it is best used in a dimly lit, even dark, room projected over a white wall. Brightness is an issue with most, if not all, pico projectors and the Nebula capsule is unfortunately not an exception. Thankfully it supports keystone correction, so you can move it around before finding the sweet spot. See the pictures below to have an idea how the image looks like under different lighting conditions.

One of the best features of the Nebula Capsule is the fact that it runs Android 7.1. This allows the Capsule to be a standalone device, somewhat akin to an Android TV box. However, keep in mind that it does not run actual Android TV but rather a modified version of Android Nougat which nevertheless opens the device up to a plethora of possibilities. The projector comes preloaded with a third party App Store, called Aptoid TV, that is not tied to Anker or Google but features lots of re-uploaded apps from the Play Store. From there you can search for your favorite streaming app like Netflix, YouTube and Spotify and even find some Android games! If you got weary about typing to search for an app using the remote control, then rest assured that you can use the phone app to type using your phone’s keyboard and even use the phone’s touchscreen for clicking and scrolling. However the lack of Google Play Services can raise some issues like the inability to login to the YouTube app from the Aptoid TV store. But since this device runs Android, you can easily sideload apps like the SmartYouTubeTV app that do not depend on Google Play Services and works as intended. Indeed, the Nebula Capsule comes with a USB OTG dongle that allows the user to plug in their USB storage device from which they can play or even store media in the device's internal memory but also install third party apps. Retro console emulator, anyone? 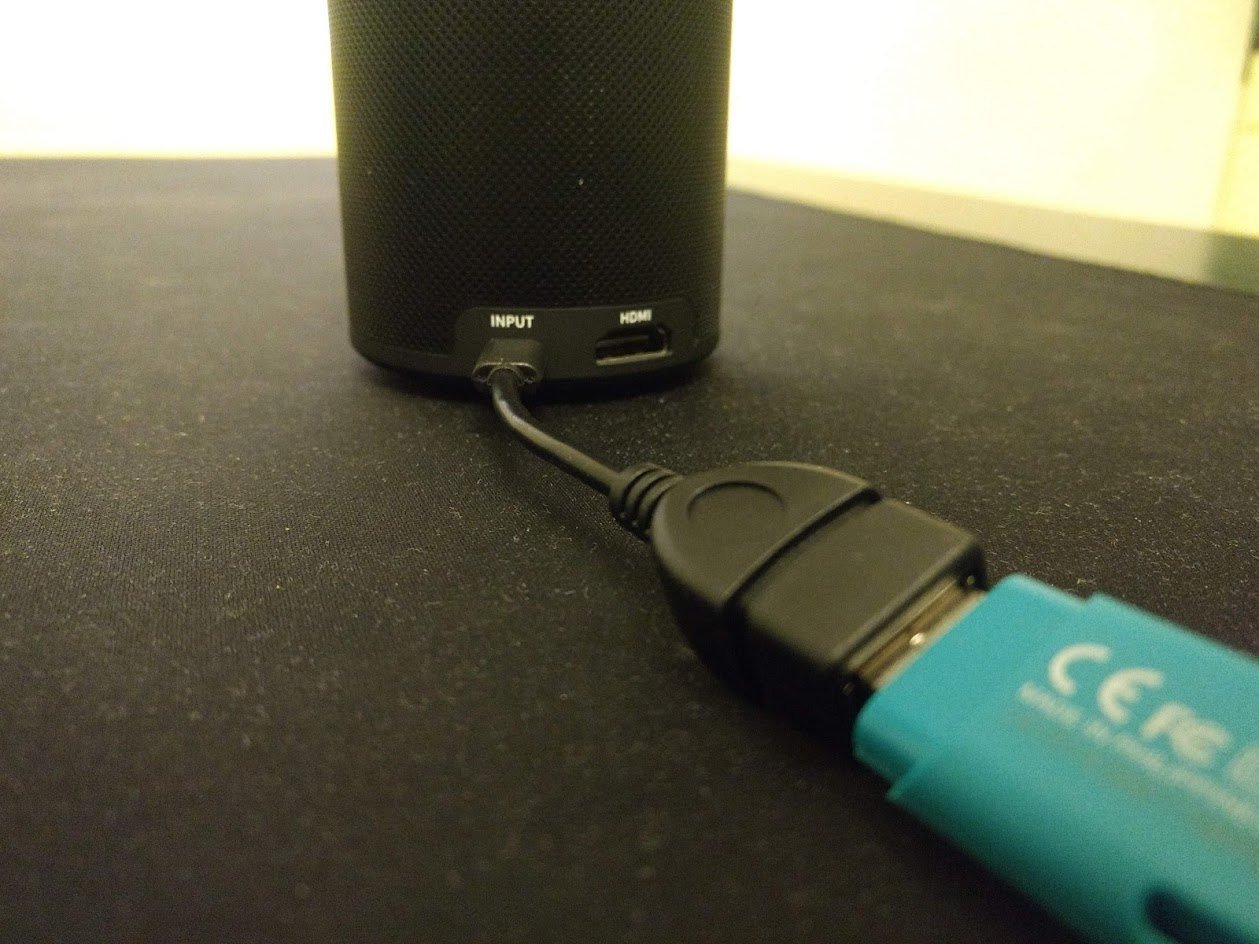 With the full HDMI port (not a mini port), you can of course connect your PC or laptop to project your movies, games and what not. Unlike the issues I faced with the Optoma HD143X, the Anker Nebula Capsule ran flawlessly when it came to gaming. I tested it with my gaming laptop, my Nintendo Switch in docked mode and with the Super RetroTRIO Plus and they all ran without issues, delivering crisp and fluid images. There is also a screen mirroring feature via Airplay and Miracast, but is not optimized for Android devices.

However you’ll have to note that the resolution is not the best at 854x480 but I found it to be an adequate concession to make given the size of this projector and the image delivered is indeed of high quality despite the resolution. This is mostly the case because you will preferably sit only a few meters from the projector. The optimal range of positioning the Capsule from the projection surface is between 0.58 m and 3.08 m and the projection image size ranges from 51 cm to 254 cm. The closer the projector is from the wall, the more crisp is the image but the image size is proportionally smaller. I found that placing the Nebula Capsule between 1.5-2 m from my wall delivers a good enough image quality and size for most purposes.

While we are still on performance, you might be wondering how the Nebula Capsule fares in regards to battery life. I am happy to say that this little piece of tech does quite well. I sat through the whole Searching movie (runtime about 1h 42min) with WiFi turned off from 100% to 46%. Watching other movies like Wayne's World and Venom would use about the same amount of power, so there is enough charge left for a shorter movie or a couple of your fave series’ episodes once you are done with your first movie. When it comes to gaming, I came with a similar result. Playing one hour of Hitman 2, or any other game, for that matter would use about 28% of the battery (from 100% to 72%).

The Capsule also comes with a Qualcomm 3.0 quick charger, which actually charges fast - taking around 2 hours for a full charge.

Pro tip: juice out more battery by switching WiFi off on the projector if you are using a flash drive loaded with a movie/series via the OTG cable or are projecting the image from another device through HDMI.

Priced at $349.99, the Anker Nebula Capsule does not come cheap. And at this price, there are a few items that I feel should have been included but are not. For one, there is no hard carry case included and given the premium price and the fact that this projector has been designed to be carried around, one should have been provided. Nevertheless, Anker did provide a soft meshed bag. Also, there is no protective cover for the lens but the thick glass covering it should provide adequate protection. 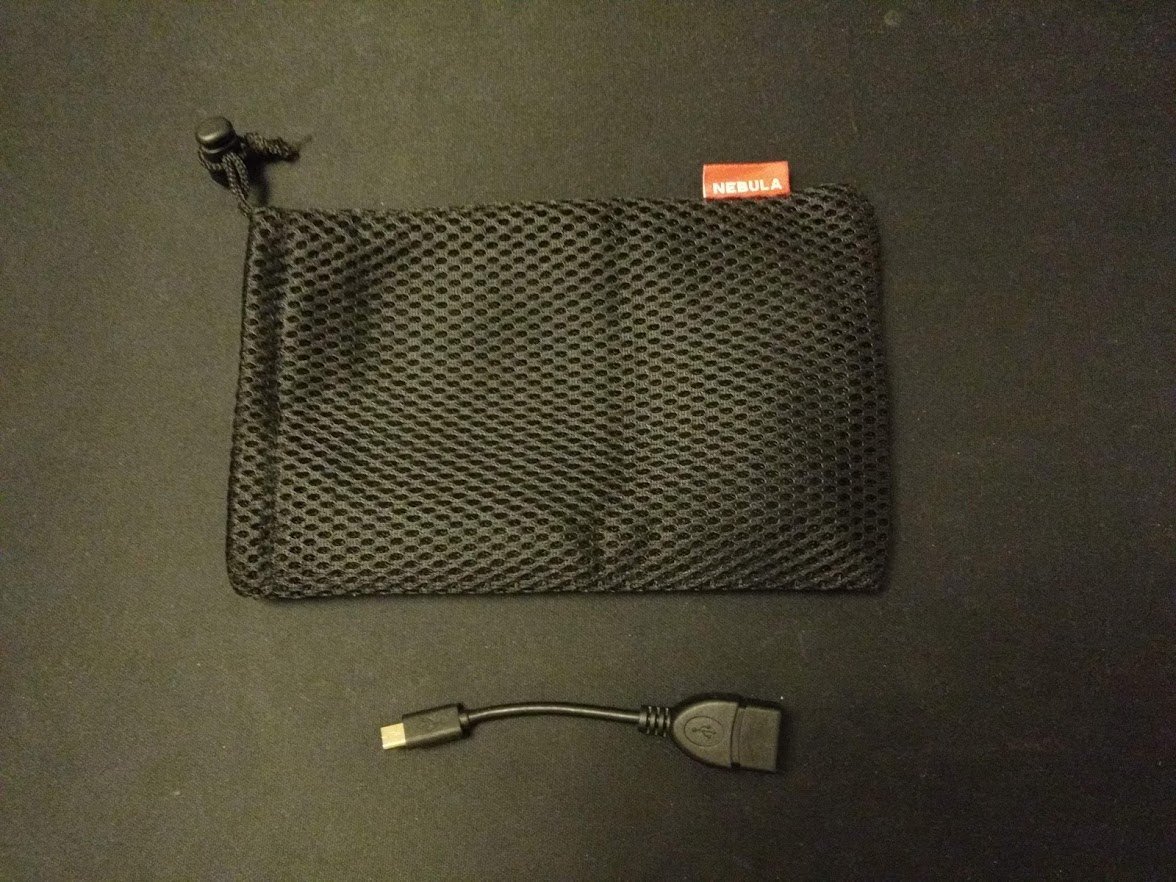 Lastly, the lack of a headphone jack is a glaring omission. While the built-in speaker is decent, you are left with using only that as your audio source when watching the latest movie and cannot plug in your favorite headphones that can provide a better sound quality. However, there is the option to use Bluetooth headphones and speakers instead of the built-in speaker, that is, if you have one.

Despite the few missing items and features and not having the best resolution out there, I do enjoy the Anker Nebula Capsule. Its small footprint, ease to carry around, build quality and design really do make this projector stand out from the crowd. Watching YouTube videos, series and movies on the projector emulates a cinematic feel, despite the resolution, and gaming on a big screen is always a treat. In addition, packing the device with a full-blown Android OS is an interesting concept that opens it up to even more options, especially through sideloaded apps, and allows the Capsule to be a standalone entertainment system. The most impeding factor that I can find is the price of the device itself. But if you can afford it, you will be able to make the most out of it. 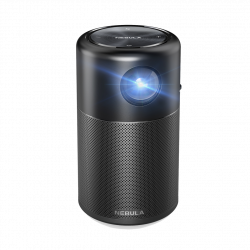