Hardware I don't know what I'm looking at w/ this motherboard; ideas?

I am in the market for a RGH 360 and in my searches, I came across somebody selling what they claim to be a 'Jasper' phat console with RGH 1.2. I almost bought it because the price was good, but before I did I looked at the photos a little more carefully. First what caught my eye was that the "Jasper" console was in a Zephyr case. The power rating on the back of the case stating 16.5A which uses the 203 Watt PSU (16.5 A). Then I looked at the heat sink and realized it's wrong for the Jasper, and the southbridge chip is also wrong, but the pin out to connect the external PSU is a Jaspers'. I asked the seller what's going on is he selling a Zephyr motherboard with a different power connector soldered on, and in a Zephyr case, but stating the build incorrectly? I was met with the seller stating that in fact the motherboard is a Jasper, and that he, "use to fix xbox's back in the day, this info is not new to me! the first pic you're seeing is a pic of the rgh chip installed, (stock pic) for me. I know what i'm selling! i'm not misleading anyone! you know how dumb this sounds, i have a "Zephyr motherboard" but have a "jasper (PSU)" Explain to me how can a "Zephyr motherboard" have a "jasper (PSU)".

I have a Zephyr and even opened it up to confirm the identical Southbridge chip and heatsink. I also have a Jasper, but didn't want to open it up to confirm the differences that I'm witnessing, but looking at pictures online all show Jasper's having a different Southbridge chip in the top left of the console and a different heatsink for sure. Am I crazy here, or is this someone's frankensteinbox 360?

...Here are the pictures

can't remember what the mobo looks like as it's been years, but the power connector is jasper.

godreborn said:
can't remember what the mobo looks like as it's been years, but the power connector is jasper.
Click to expand...

Yeah I recognize that it is a Jasper power connector; also the seller did say the, "the outter shell is different".
Although I did just realize he said the first pic is a picture of the RGH chip (stock pic for me) leading me to think that the item he's selling is just in the Zephyr case and the first picture is a stock picture of his. Hmm. Now I have a conundrum of if I should buy it and trust him or not.
Last edited by Retinal_FAILURE, Jul 23, 2020, Reason: didn'

not sure what that means. the connector would be part of the mobo though, and it looks correct.

godreborn said:
not sure what that means. the connector would be part of the mobo though, and it looks correct.
Click to expand...

I'm not sure either, but doing quick and dirty searches online reveals the internal difference of Zephyr mobo to Jaspers. The first image is a Zephyr and the second a Jasper showing immediate differences in Southbridge chip to the upper left of the heatsinks respectively and obvious difference in the heatsinks themselves. 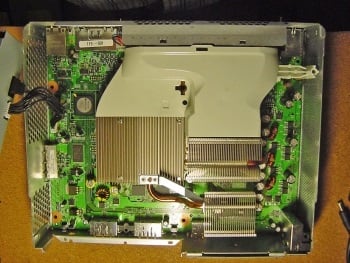 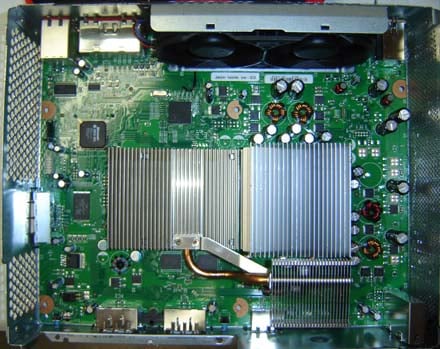 the top image is a zephyr? looks like the one in the pic. I've never owned one. I think they were replacements for the xenon if you shipped yours to microsoft, so I don't think they were actually sold, which could be an even worse sign: did the pos xenon fail like they all do or does this person not take care of his stuff.
Reactions: Retinal_FAILURE

godreborn said:
the top image is a zephyr? looks like the one in the pic. I've never owned one. I think they were replacements for the xenon if you shipped yours to microsoft, so I don't think they were actually sold, which could be an even worse sign: did the pos xenon fail like they all do or does this person not take care of his stuff?
Click to expand...

Ya/Kinda yes. I have a Zephyr from new and it came in the Xbox 360 Premim config. This is what is stated about it..."Zephyr was the first revision with HDMI connector and fixed the RRoD problem cause by the inadequate GPU cooling on Xenon boards. It was introduced with the Xbox 360 Elite in May 2007. In July 2007 Xbox 360 Premium machines began appearing with the Zephyr motherboard." Funnily enough my Zephyr failed with RRoD when most were ~2009ish, but I sent it to Microsoft and they repaired it. opening it uop for the first time sisnce I received the repair back yesterday confirms that Msoft I believe gave me a new DVD Drive and newer revision? bigger? X-clamps on the bottom of the board. My model still works to this day, but I treat it like a baby just using it for an occasional disc based game sesh or two every once in a great while. I bought my Jasper console from my neighbor and she installed an XKeY in it ; so that was really the reason I didn't wanna rip the DVD drive out to look at that consoles motherboard, but the lack of proper English from the seller is deterring me from an answer.
Last edited by Retinal_FAILURE, Jul 23, 2020, Reason: more appropriate description of fail
Reactions: godreborn

I wouldn't trust a zephyr. falcon and beyond is usually where people say you should be or better jasper and beyond I own one jasper. it's too new to jtag. I have two jtags as well, and they're both falcons. after my first xenon dying, I'm reluctant to play the 360 much.
Last edited by godreborn, Jul 23, 2020
Reactions: Retinal_FAILURE

Ya the Jasper I have is quiet, and stays cool too with a stock fan; of course the XKey helps too, but playing the Zephyr for even 15 minutes I can tell why they fail and all Xenon/Zepher/Falcon/Opus will again even if repaired. It's so hot and the fan is louder sounding than the Jasper to me too. The best part was just cleaning the dust out of the Zephyr today. It still runs hot, but maybe a centigrade less or two.
Last edited by Retinal_FAILURE, Jul 23, 2020, Reason: because

my main falcon runs pretty well, but I don't play it. I have temp thresholds set at 60 degrees C. the fan is loud though. it's like the fan of a ps3 playing a ps2 game set at 50%. lol I think rrod is why a lot of people will never buy an xbox no matter if it's a 360 or not. they kinda killed their brand.
Reactions: Retinal_FAILURE

after their initial e3 for the xbox one where the system had to phone home and what not every few days, they further destroyed their brand. I like what I'm hearing about the new xbox, but I doubt I'll buy one. it sounds better than the ps5, which looks like a vagina.

Ya they're both appealing in the worst ways b/c there isn't going to be any incremental gap with the quality of the gaming experiences with both of these consoles. I don't have an Xbox One or a PS4, but I have a Switch with CFW I hardly play. I just feel that games started to lose a lot of appeal when a lot of the times a game would aid a player and hold their hand/ give then tools not to die, but too much help to have fun. There are tons of exceptions I guess, but I'm not looking. I do have to say I'm interested in the new PS4 exploits, but not $500 interested.

don't own a cfw switch. I like the system, because I enjoy what nintendo has to offer. I hate sony with a passion despite knowing a lot about their systems. I hate their arrogance and their "who cares about their security" approach to their customers when it comes to psn. they're the reason I don't have my credit card saved in the switch. biggest data breach in history. that's quite a feat.

godreborn said:
don't own a cfw switch. I like the system, because I enjoy what nintendo has to offer. I hate sony with a passion despite knowing a lot about their systems. I hate their arrogance and their "who cares about their security" approach to their customers when it comes to psn. they're the reason I don't have my credit card saved in the switch. biggest data breach in history. that's quite a feat.
Click to expand...

Ya I never have been on the Nintendo Store if that's what they call it on the Switch, so I don't have an online presence with them. My Sony accts. both legit and throwaway don't have any payment methods tied to them in case of another breach, either. With the Switch it asked me to make an acct. but that's even without an internet connection, it's just an avatar thing. They didn't ask for credit card information, and I wouldn't give it to them, either if they did.

"motherboard with a different power connector soldered on"

Now I have not gone the absolute furthest into 360 repair (indeed I am somewhat surprised the pin pattern is the same but I suppose that does not matter when you are building the things) but I have never seen a power connector need to be replaced with another, or reflowed for that matter. They were generally pretty solidly mounted inside a recess that doubled as strain relief.
This includes any number that have fallen off shelves (though that is usually discs with a nice ring or messed up USB), been yanked, been crushed into the back of cabinets to the point of overheating (and also RROD), had the lead twisted quite hard in things and more besides. Nor have I ever seen any "failure to power at all" on original style 360s (slims is a different matter, and usually trivially fixed -- clean the dust out from inside the PSU and unplug things from the USBs) or wiggle the PSU connector on forums or the like (compare to the barrel jacks on PS2s where that is common as you like).

I guess I'll never know the answer. First I hardly got any sleep last night and then about 10 mins ago I thought alright I'll buy it. What's $70?, a ~26% savings offer from the original price that the seller offered to me two days ago; but in my sleepy haze I forgot to accept the offer and accepted the price of around $105 after taxes; then I remembered the seller had two units for sale, so I went ahead and accepted his offer for $70 for the 2nd unit and promptly cancelled my first order and wrote a message to the seller stating my mistake and wanting to return the more expensive item, but wanting the $70 xbox 360. He then cancelled both of my orders and pulled both of the items off of the site and refunded me my money, but not before calling me a "karen".

B
Hacking Hi everyone: I'm noob I have a problem with xbox 360e flashing nandflash.bin

If you had to put a PC inside a console, what console would it be?