Log in Register
Menu
Install the app
You are using an out of date browser. It may not display this or other websites correctly.
You should upgrade or use an alternative browser.
Official Review PlayStation 4

Single player
Local Multiplayer
Online Multiplayer
Co-operative
On the rails shooters is a genre that was somewhat revitalized by the Wii during the last generation. In an age where lightgun games were no longer viable technology thanks to flat panel screens the wiimote was naturally suited to those type of games with no extra hardware needed in order to play them. A few on rails shooters still found their way onto the xbox 360 and PS3 however, but the trouble was you either needed a kinect, PS move or some other peripheral in order to play them. This made their appeal somewhat niche outside of the Wii and often lead to the games being expensive as you needed to factor in the cost of extra hardware. But now we have a new generation of consoles and thanks to the clever technology in the PS4's dualshock 4 controller we can get our shooter fix with a traditional pad without the need of any extra peripherals or wiimote type devices.

Viktor Kalvachev’s Blue Estate made its way onto the PS Store last week seemingly out of nowhere and with little publicity, but in my opinion it is one of the more important recent releases on the PS4 to date. As a technical showcase of what the PS4's Dualshock 4 controller is capable of this little download only title really displays the versatility and potential of the DS4, as well as pretty much nailing the control template for any other on rails shooters we may see on the PS4 in the future. 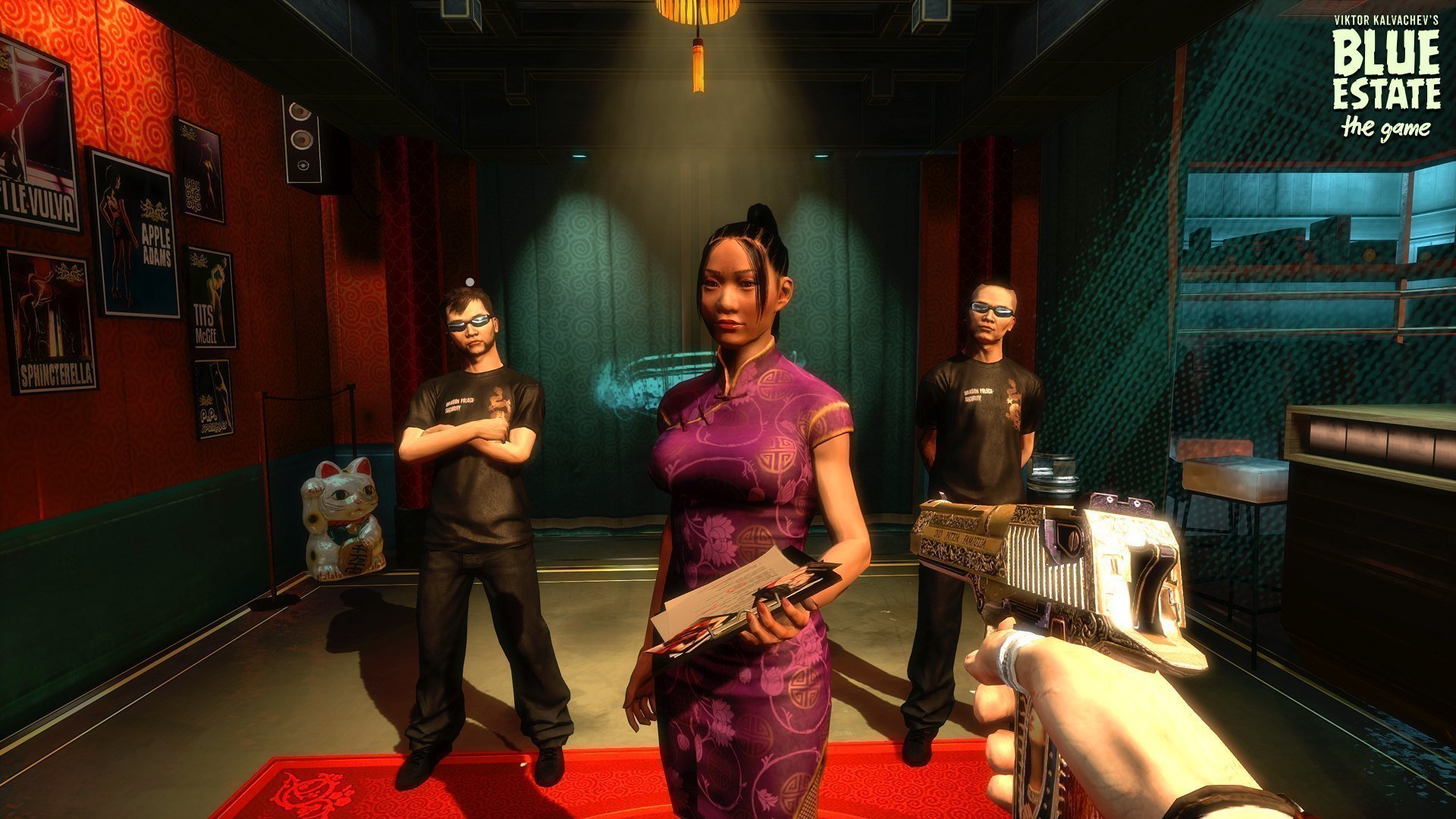 Based on the comic book of the same name, Blue Estate is a shooter that doesn't take itself too seriously, full of pop culture references, witty one liners and ridiculous characters you certainly will not be bored as you play through the games story mode. Set in Los Angeles you play as two characters, the first is Tony Luciano, the vain hair obsessed son of a mob boss who has inadvertently gotten himself involved in a gang war with the Asian mafia. The second is Clarence, an ex Navy SEAL gun for hire who is only working to save his mothers home from foreclosure. Cue lots of humorous Italian and Asian mafia stereotypes, settings and situations, the developers HeSaw never miss a beat or fail to keep you entertained as you play. From a bra wearing Kim Jong-Il look alike gang boss who attacks at super speed, to John Woo parodies and even sewer based chihuahua cults the story in Blue Estate is a highly entertaining comic farce the whole way through which will not fail to put a smile on your face. 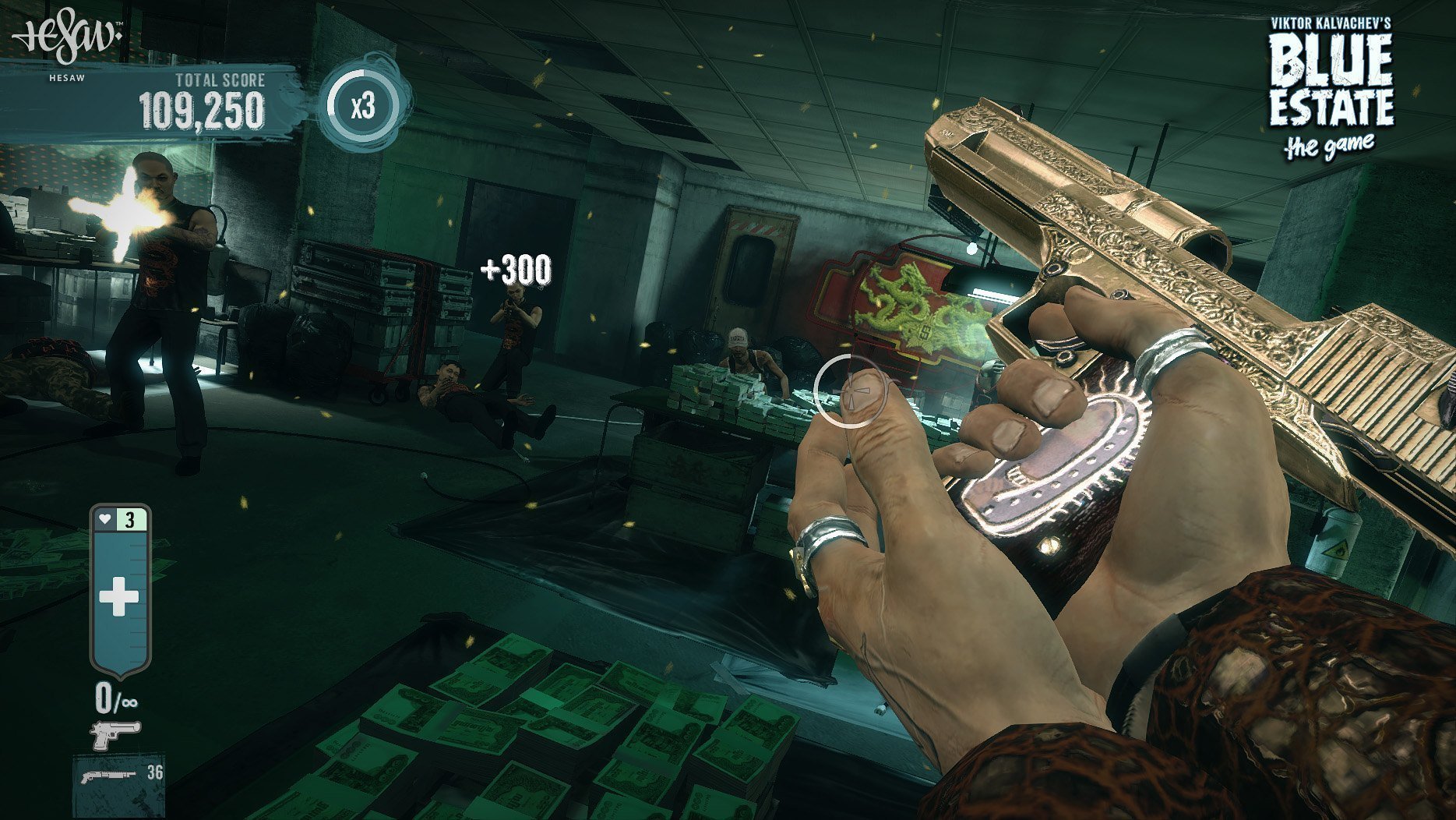 Of course a humorous and entertaining story can only get you so far and the meat of any shooter is in its shooting mechanics. For on the rails shooters especially the fluidity and accuracy of the control schemes is life and death, no pun intended. I alluded to the fact that Blue Estate was an important game as it is one of the first to truly show off how versatile the Dualshock 4 is. The motion tracking of the DS4's gyroscopic sensors is just as accurate and sensitive as a wiimotes, the added benefit of them being that you do not have to directly point the controller at the screen (although obviously that is the most natural way to play). However the downside of just using the DS4's gyroscopes is that the calibration drifts off frequently as you move the controller, and although there is no loss in accuracy you will find yourself needing to frequently recalibrate the DS4 in order to keep playing comfortably. Luckily HeSaw have made the calibration process for the controller a breeze, when you have positioned the controller at the middle of the screen (or where you want the middle to be) you simply tap L1 or up on the dpad and your crosshair centers itself. 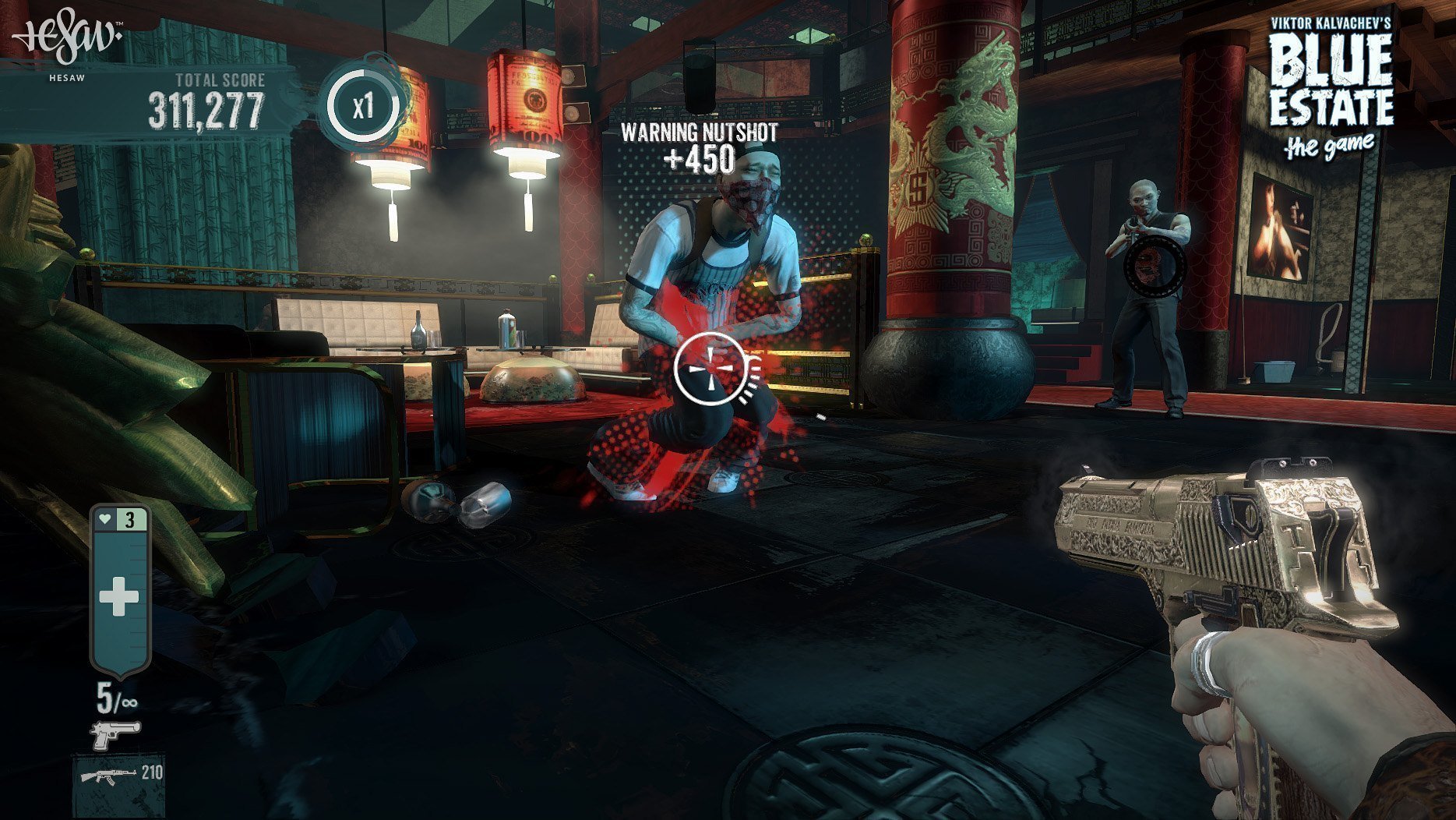 As well as shooting with the R2 button the DS4's touchpad comes into use quite often throughout the game, with you quickly swiping to melee attack enemies, pick up items, open doors and flick the your hair out of your eyes. Your default weapon in game is the pistol which has unlimited ammunition but other more powerful weapon pick ups are available as you progress however their ammunition is limited. And of course being a rail shooter there are strategically placed explosive barrels and bombs that can take out multiple enemies in one go. The game also makes use of a cover mechanic at times which lets you pop into cover and reload safely while enemies shoot at and slowly erode your cover. Other interesting mechanics of note is the slow motion power up that you can shoot which activates a brief period of bullet time, and a yellow reticule which appears over the next enemy that is about to shoot you which allows you to strategically select your next target. 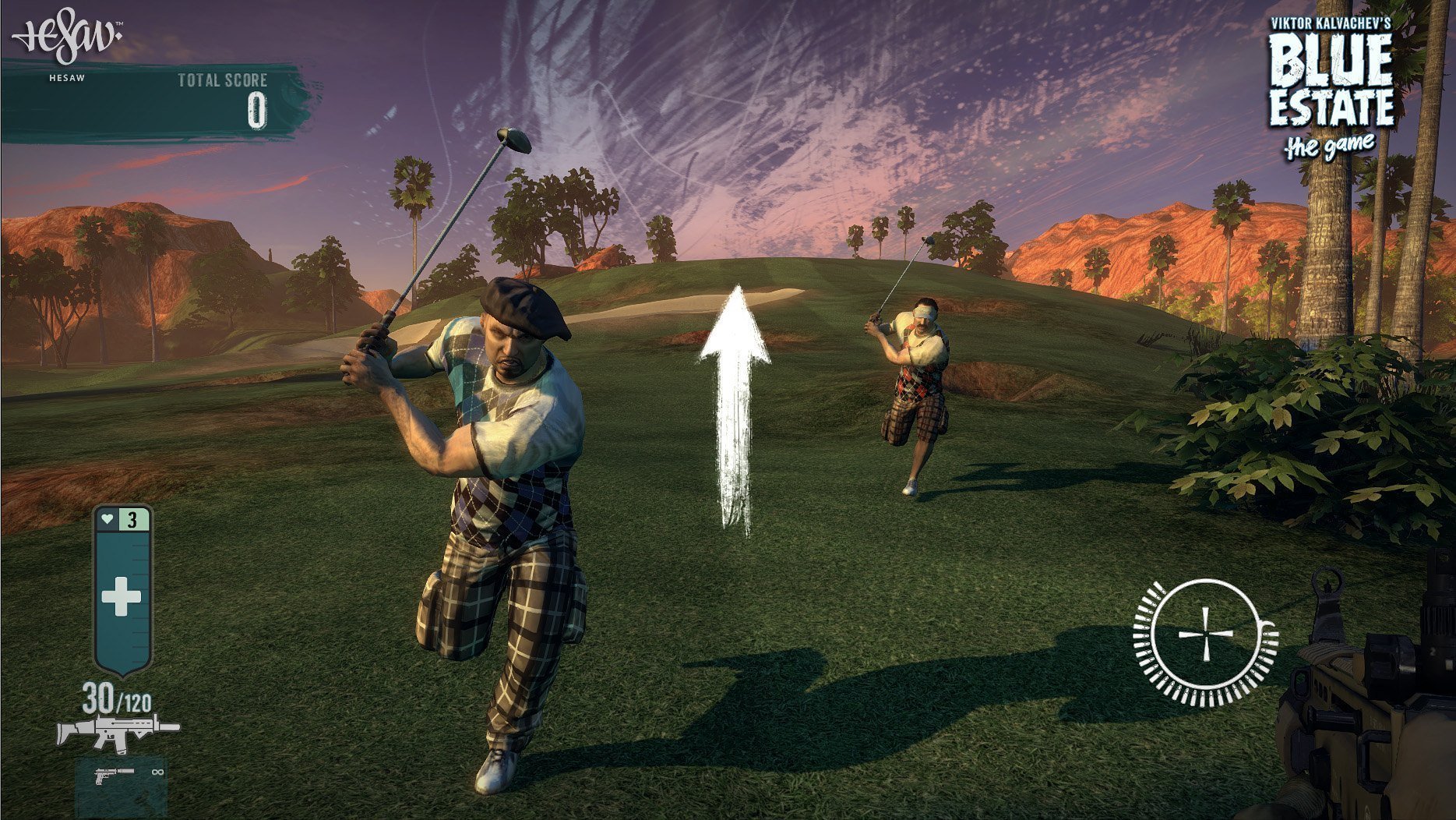 However as entertaining and as fun as Blue Estate is it is by no means perfect. Outside of the story levels there is nothing to draw you back to the game, and the levels themselves are extremely short. You can complete each one in about 20 minutes and there are only seven to chose from so at best you will see everything the game has to offer in about three hours. Of course you could always play the harder difficulties or aim to increase your rank on the online leaderboards, but the lack of game modes really is a shame as the game is so fun and charming you will want it to engage you much more. But despite that and considering it is a download only title that costs less than half the price of a regular game this can be forgiven to a degree and the overall score wont be that affected by it. 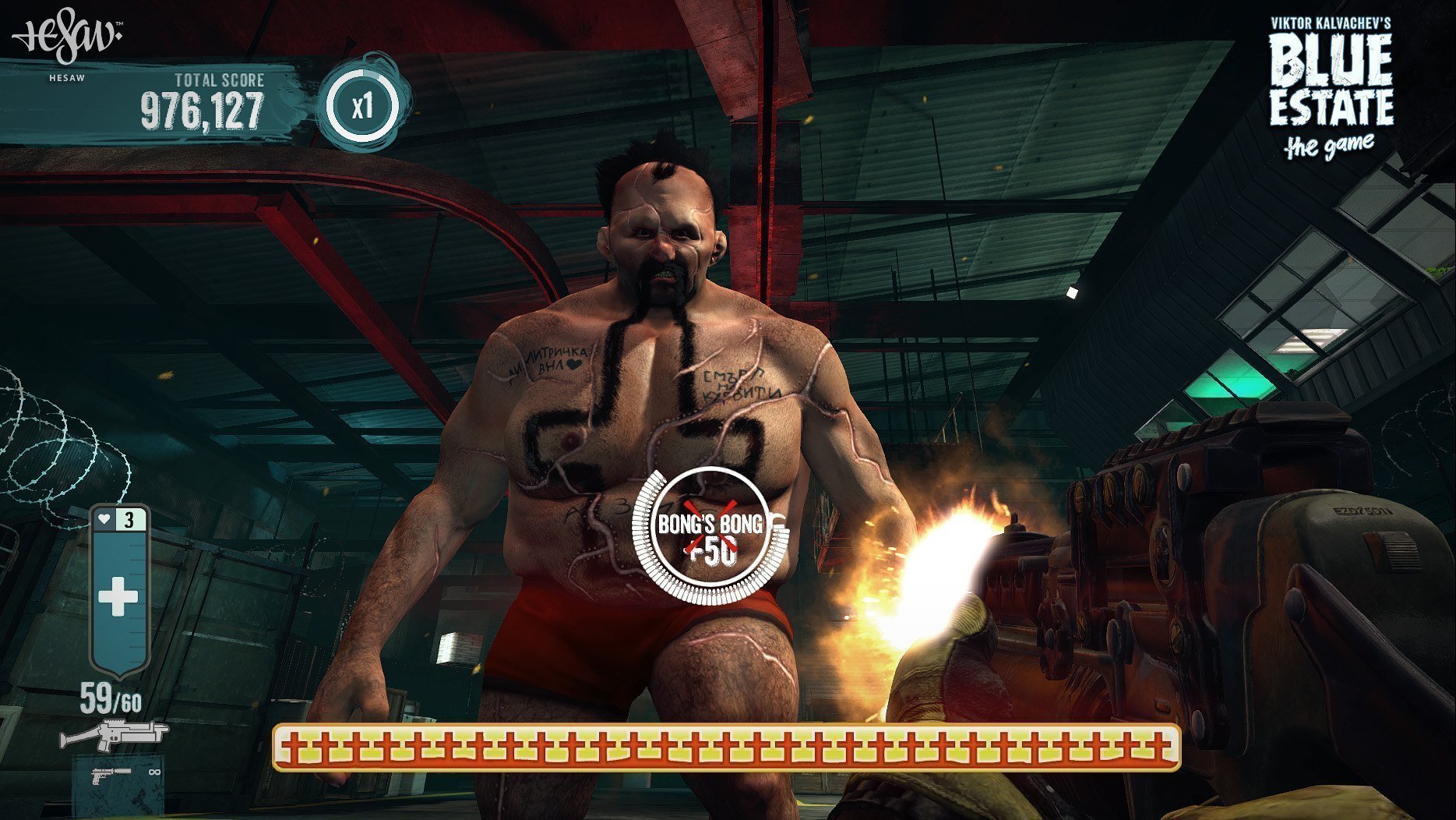 What We Liked ...
What We Didn't Like ...
8
Gameplay
The gunplay is fun and accurate with innovative use of the DS4. The swipe gestures work well with the only downside being the constant need to recalibrate the controller. Luckily this is easy enough to do so it doesn't really impair the gameplay at all.
8
Presentation
Good graphics and sound assets but nothing that will blow you away. Of course this is a download only title so you wouldn't expect it to push the envelope in that way. Blue Estate is a title that is hard to dislike mainly due to its presentation so you can not really fault it, you will be entertained constantly as you play with no real dull moments.
6
Lasting Appeal
With only a handful of (entertaining) levels to play through you can easily complete Blue Estate in one sitting. Sadly other than trying to beat your high score and increase your rank on the online leaderboards there is little to increase the games lifespan. The lack of game modes and the briefness of the story mode of Blue Estate is probably its biggest weakness, although this is a title that you will probably return to when you have 20 minutes to kill and just want a quick blast of fun.
7.5
out of 10

Blue Estate is a game that is hard not to like as you play it but the experience ends all too briefly which is a real shame. As a technical showcase of the DS4 it is impressive and is probably the first in a long line of rail shooters we will see on the PS4. However as fun and as entertaining as the game is the lack of content it provides can not be ignored, but despite that the game is still charismatic enough to recommend to anyone looking for a fun little time killer. A solid 7.5 that could have easily been higher if there was more bang for your buck on offer (as it where).
Reactions: T-hug, Ryukouki and Foxi4
Share:
Facebook Twitter Reddit Pinterest Tumblr WhatsApp Email Share Link
Never heard of this game - for shame, as I do like rail shooters and I'm glad you've covered it. Looks interesting, I'll definitely give it a shot (ha!) once I get a PS4 of my own.
Sex, drugs, and guns...

even if the game sucks, it'll sell well regardless.
Sure as sh*t didn't work for Ride to Hell, XDel. Then again, a lot of people bought it specifically because it was a magnificent trainwreck.

@ mthrnite: but we're prolly ants too A moment ago
Chat 4