Velocifire has been on veloci-FIRE lately with how fast they’ve been dishing out fancy mechanical keyboards. Today, I’ve been given the opportunity to review their latest keyboard, the Velocifire M2 which recently launched after a successful Kickstarter campaign. So, sit back while I tell you what I think!

With hundreds of mechanical keyboards flooding the marketplace from dozens upon dozens of different companies, it can be overwhelming to find the keyboard that is right for you. Well, today we are going to figure out whether the $49 M2 is something to consider by looking at its features, functionality, and what it is missing. But before jumping into the review, I always want to know about the brand that I am purchasing products from. Here’s an excerpt of what Velocifire has to say about its company, per their official website:

“Velocifire was created in 2015 and initially, we were just a small team. The original idea was to design and build a mechanical keyboard for the game. We also put our ideas into practice. In the first two years of the team’s inception, we designed and produced different types and characteristics of gaming keyboards. Although we have won the support and affirmation of some friends, under the pressure of the market and with continuous expansion, the team disagreed with Velocifire’s brand positioning and product development direction . . .

. . . After many discussions and thoughts by the team, we reached an agreement. At this time, only the change of thinking is the long-term development direction of the future. Decided to shift the focus of research and design of our products to the development of mechanical keyboards for the office population. . .

. . . So we intend to develop a mechanical keyboard for office use for these problems.”

Essentially, Velocifire is transparent in their goal. They started out making mechanical keyboards for gamers and have since shifted their focus to making mechanical keyboards for the office. The M2 certainly has an aesthetic that fits well in an office environment, but simply by its design I struggle to think about this keyboard as anything but a gaming peripheral. I’ll explain after the jump.

The M2, otherwise known as the TKL61WS, has a very similar build and layout to several of Velocifire’s older keyboards—specifically the K61W and VM01. The M2 features 61 swappable Outemu key switches. The $49 version of the keyboard comes with a braided 1.8 meter long Type-C cable, a keycap puller, a switch puller, and the user manual. The $55 version of the keyboard comes with that as well as your choice of keycap set. There are also $59 and $99 versions of the keyboard which you can back on their Kickstarter. I only have the $49 version of the keyboard without the keycap set, but I am very happy with the keys that it came with, so no harm no foul. Unlike Velocifire’s earlier mini keyboard models, this keyboard shines (literally) in the fact that it has many different RGB backlight options, including none at all. 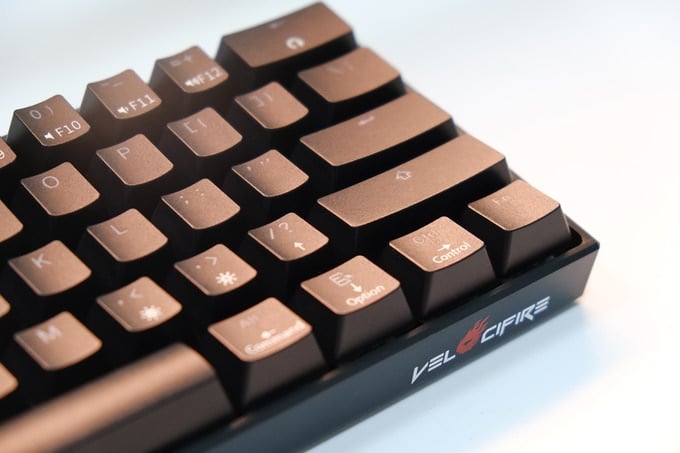 I’m kind of a hoarder and my desk is absolutely packed, so I’m happy that I have a keyboard that can fit on it comfortably. Since this keyboard was designed for those who prefer their keys closer together in a smaller, tighter package, the numpad has to be removed. There is a slight learning curve when switching from a larger keyboard to a smaller one, but after a few hours of typing, I was able to make using this keyboard second nature, including some unfortunate aspects that I’ll have to discuss a bit later.

The manual does an excellent job explaining how to use the keyboard’s features which is something that I really appreciate because there are a lot of nuances to it. Remember, the Fn key is your friend here. This keyboard can wirelessly connect to up to 3 devices and can switch between the three of them in a second, by holding the Fn key and pressing either Q, W, or E. For example, I personally have my computer mapped to Q, my phone connected to W and my PS4 set to E. I’m not always in a position where I can use this keyboard with my phone but there are times where it is very useful to input a lot of text very quickly. Connecting to a new device is as easy as pressing Fn+R to enter into pairing mode and then doing the rest from your device.

It would take complicated factorial calculations to figure out how many backlit options there are on this keyboard, so let’s just leave it at “so many that you’ll certainly be able to find what you want.” Using the Fn key and I, O, or P you can swap between 18 different types of default lighting modes. You can also change the colors of the individual keys, and increase or decrease the brightness and speed of the backlights with other keys. And when you find what you like the most, you can save it to either Fn+Z, X or C. What I like is that I can even turn the RGB off when I am in a place that doesn’t really call for a lot of light. 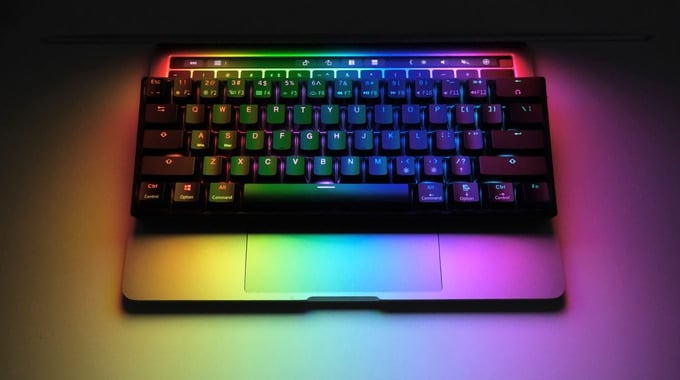 This keyboard is rather sturdy and doesn’t slide at all when I am typing, but the rubber stoppers at the bottom of the keyboard let the keyboard slide rather smoothly when I purposely move the keyboard, without scratching the surface that you are typing on.

I really like this keyboard, but it would be wrong not to address the three complaints I have with it.

First, I know that the idea of this keyboard is that it can be used in an office environment as well as when you are gaming, but I really don’t see how that can be the case because, like most mechanical keyboards, this one makes a lot of noise while you type. It gives me a great feeling of power while I’m at home (and typing this review or playing a game) but I can only imagine how annoying all of this would be for my coworker or classmate. So, I call shenanigans on the idea that this can be used in most workplaces. 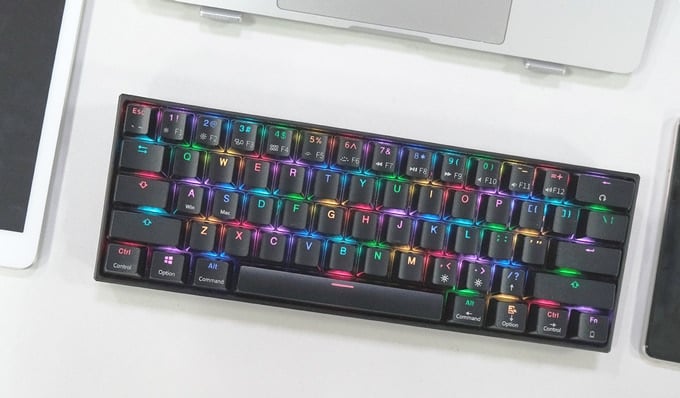 Secondly, the issue with having everything placed so close together is that many keys serve many different functions and you have to go through more than usual to press what you want. I find that in my line of school and work I use a lot of question marks. Generally, you just have to press SHIFT+? to type a question mark. However, by default, the ? shares a key with / and the up arrow key. By default, pressing that key works as the up arrow, and pressing shift before it doesn’t change anything. To type / you need to hold Fn and press it. And to type ? you actually have to do Fn+SHIFT+?. I shouldn’t have to press three keys in order to type a question mark. There may be a way to fix this using the Velocifire software, but that brings me to my next issue.

The Velocifire software, in my experience, does not work with this keyboard. The software is not available on Velocifire’s website and I had to get in touch with a representative to get access to it. Eventually I got a copy of the software but it does not recognize the keyboard and I constantly get the error “No gaming device detected.” I’ve tried the software on different computers to no avail and even after much troubleshooting with Velocifire, we can’t figure out the issue. That means that for the foreseeable future I can’t test the software or recommend you get this keyboard if the software is a major factor in your decision.

But I can recommend this keyboard as is because it’s fully functional and very customizable on its own. I hope that the issues I addressed will be kinked out in the future, but for now I am very happy with this keyboard. 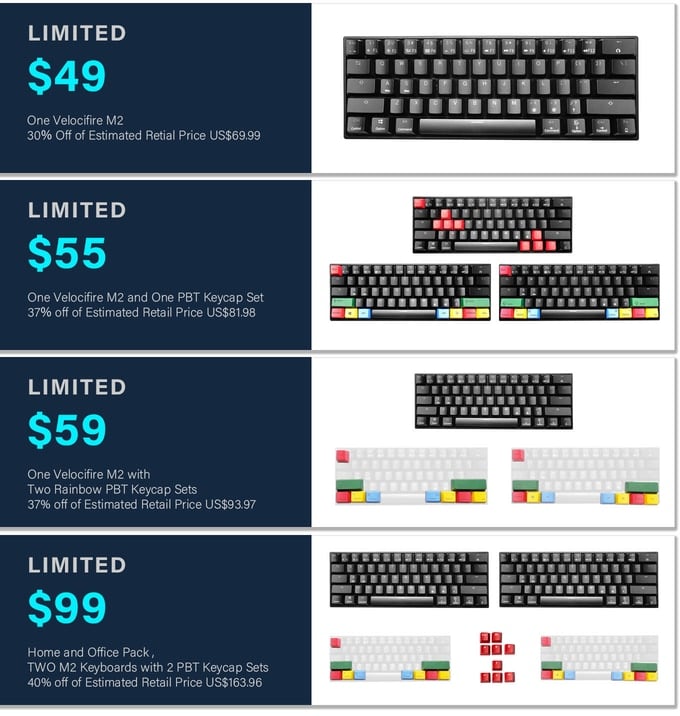 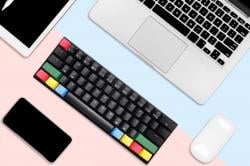