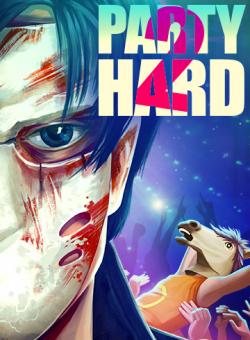 It's 3am and those damned party-goers just won't shut the hell up! What is the obvious thing to do? KILL THEM ALL!

Party Hard 2 is a stealth game in the same vein as Hitman, but in the style of a pixellated '90s top-down slash-'em-up. The core mechanics of the game are simple: take down the drug lords, free hostages, decimate gangs, and don't get caught! The last point is certainly easier said than done if you attack with a gung-ho attitude, which unfortunately I had for the first 40 minutes or so. I had to learn to slow down to truly appreciate how the game was meant to be played.

Set in what could be any city of modern-day America or Europe, you are just a simple guy who eats, sleeps, works, repeats: but desires a good nights slumber in order to sustain your rather "John Anderson" mundane office worker existence. The problem is that you live slap bang opposite one of the most banging clubs ever constructed, run by some of the most spurious "club owners" in history, and regardless of how tired you are you just cannot get any rest thanks to their incessant drug and alcohol fuelled noise. The only answer is to kill as many of them as you can in the most stealthy and elaborate ways possible to achieve karmic peace for yourself.

• Dozens of new traps including combos: use different substances that react with each other. Why not set a chain reaction with water and electricity?
• 4 playable characters with entirely unique play styles, stats, and abilities!
• 14 sprawling levels featuring 2 boss fights
• 27-track OST
• Brand new crafting system and dozens of items to combine: why not a lighter and a can of gasoline?
• Take out multiple targets simultaneously with the powerful Multi-Kill ability!
• Scan the room for targets and useful objects using Party Vision!
• Interact with NPCs: get an NPC drunk, bribe punks, or make someone pee their pants in fear!
• Different objectives that match your playstyle! It's your call if you want to choose only objective-sensitive non-civilian targets. Killing everyone works, too. Your playstyle may affect the progression of the game, specifically unlockables.
• Local co-op is back! Stop parties, with a friend!
• Brand new 3D visuals and lighting effects
• An intriguing story of vengeance and redemption. Yes, with a twist and a fugitive circus bear 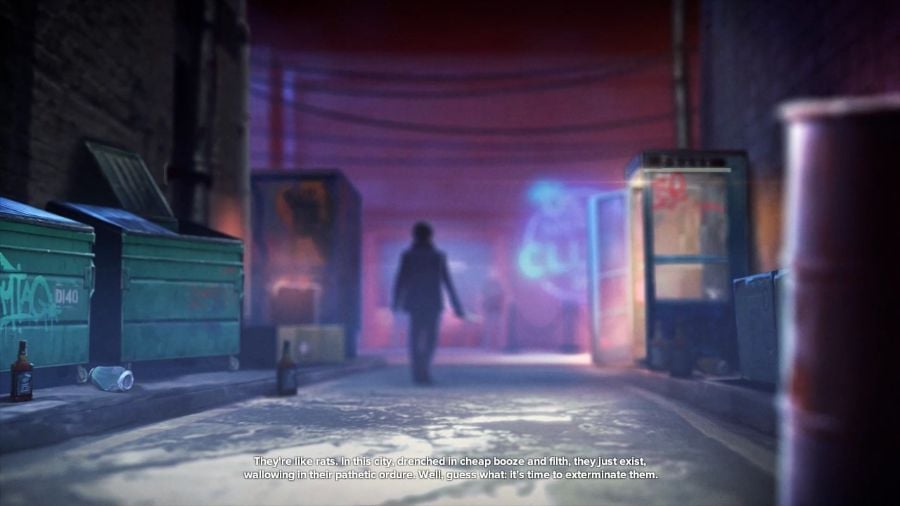 The look of the game is very particular and very appealing. With a notably dark and dingy tone, Party Hard 2 is a gritty, retro-inspired game composed of 3D environments, purposefully pixellated 2D characters and cheeky little nods to pop culture at every turn. The graphics are simple yet effective in delivering packed environments that allow for some incredibly colourful gameplay. For example, you have a plethora of objects to pick up or look at, and a variety of real-world physics-based objects to play with in your little sandbox. I found that you can pick up gas cans, pour a trail of fuel, ignite one end and sit back and watch the corpses pile up. You can also rig booby traps and craft elaborate set pieces with the sole aim of causing havoc amongst the hoards of NPCs. Failing this you always have your trusty knife for slashing up anyone who gets in your way, and you can always find some fruity weaponry to take along with you on your next mass extermination of the wrong-doers and their on-lookers.

Though the graphics are simplistic, the amount of detail and number of characters on screen is quite impressive. Causing mass hysteria on a pumping dance floor causes a herd-like stampede of people away from your general direction. Bouncers rush in, people run away, and havoc ensues as you either wait out the pandemonium or front up to any enforcers and try to soldier on deeper into the stages. The death animations are great and sometimes cause you to raise an eyebrow or two at their atrocious and somewhat comedic nature. For example, shocking a dance floor full of people is accentuated by the typical skeletal exposure effect, and running groups of people over spews blood and flames all over the scene, more often than not: painting the walls with claret like in GTA2. 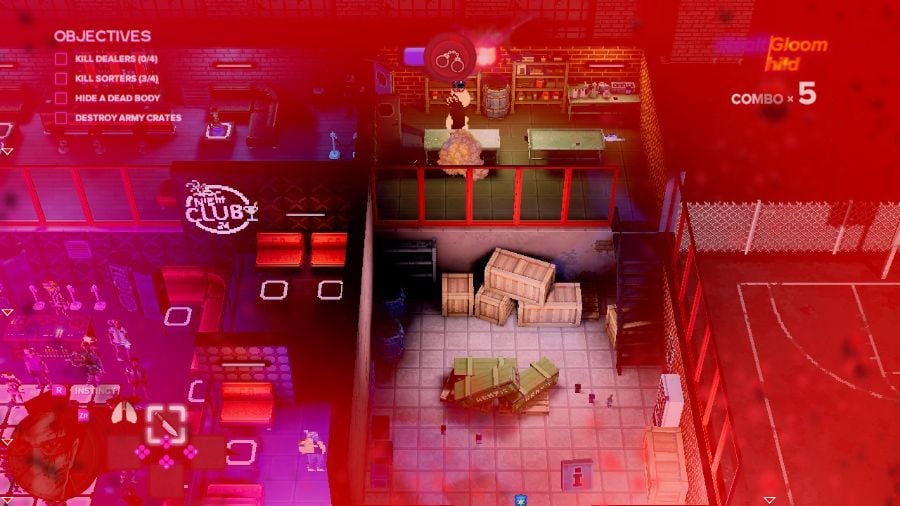 Along the way, you have a seriously pumping soundtrack backing you and invigorating your movements. I'm a big fan of electronic music, and even more so of chiptune-styled beats, so I found the background music epically motivating whilst trying to accomplish my murderous goals. It also accentuates the vibe of the clubs you stalk and charges you up for some balletic moments of multi-directional knife throwing, building incinerating, and car-ramming carnage. I love it.

NPCs have eyes, and the walls have ears. Everything you do could have a knock-on effect that causes you to eat lead or take a serious beating from the law or the local gangs. If you commit a crime in broad daylight, expect to have someone witness it and snitch on you. If you keep an eye on their orientation you can exert your justice without being seen and flee the scene, but if you get spotted, you can also observe an NPC's graphic expressions and bodily mannerisms to avert them from calling the cops on you. Beware though, you only have a few seconds when they pick up the phone and dial 911, and you will have the cops scouring for anyone matching your location.

The array of characters within even the introductory level is incredibly varied, each sporting puffer jackets, leather jackets, dinner jackets, and flack jackets: you have clubbers dancing away and enjoying themselves, you have biker gangs on the streets dealing out drugs, the upper management drug lords overseeing their product being produced, and the all-seeing long arm of the law ready to bust your ass at every opportunity. Each has differing levels of strength, and bouncers can be especially solid to come up against. More often than not you can trigger small cutscenes by falling foul of them, and they inadvertently give their positions away to the authorities, delivering you the sweet sweet justice you crave without having to get your switchblade dirty or melting anyone in a vat of acid.

Throughout your endeavours, you have to maniacally farm stats to unlock new characters and items. The categories you must build-up consists of four topics: "criminal", "anarchy", "stealth" and "mystic". Performing crazy acts such as burning, poisoning, or shocking X amount of people in addition to the main objectives will yield the best results for gaining the most XP in these classes. These additional activities can also become the root cause of messing up your entire game, as if you lose track and get busted mowing people down in, effectively, a side mission from your main undertaking: you can get busted and have to start all over again. 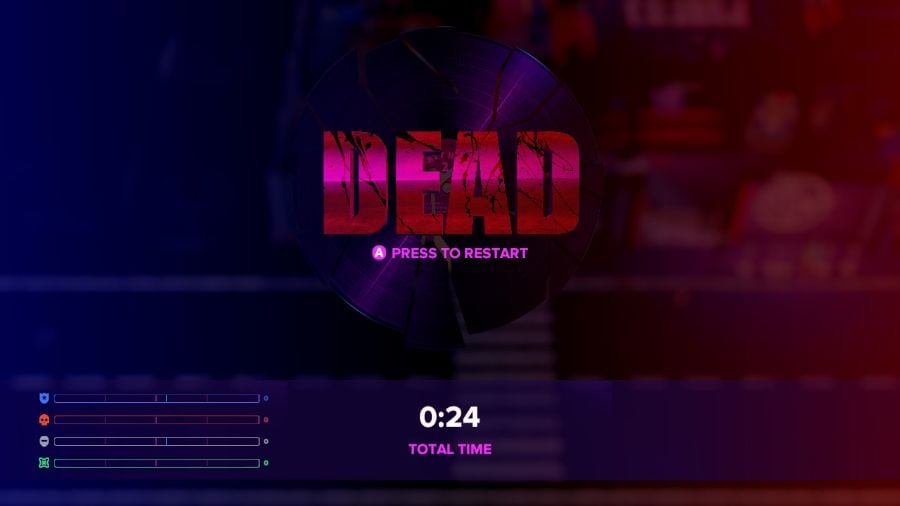 Initially, I was extremely frustrated with these unforgiving mechanics. I wanted to go on a wild spree and slash everyone that breathed as I felt for the protagonist. There are moments of insanity that you have to suppress, and your instinct to hone in on one target in particular whilst losing focus of your surroundings and any potential witnesses are something you have to train yourself to deal with, reason out, and find a better tactic. Lay traps, stay vigilant, play the long game and cover your ass in advance: these are core fundamentals you have to keep in your mantra throughout every playthrough.

I'm going to give you a pro tip: out the gate, this game is tough. By this I mean the game is unforgiving in punishing you for making clumsy decisions or not being mindful of the trail of death you are leaving behind. To begin with, I must have been busted about five times before I realised this fact, and I really wasn't having a fun time with it. Gradually I learned to lurk. I strategised each room thanks to the almost blueprint-like 2.5D viewpoint giving you a great overview of your surroundings and learning what interactivity each object offers. External bins can be used to hide bodies, vehicles and boxes can break the line of sight, and fire and electricity can be organically manipulated to make it look like you too are just a passer-by.

Party Hard 2 is a great time-waster, and a brilliant way to let out some aggression on some digital targets, but I don't think it's hardcore enough to engage you for hours on end. I found myself playing for short stints, achieving a slew of objectives and finishing each stage and then saving my progress and putting the game down for a while ready for my next play session. I never quite felt the hook of "I wonder what's next" and I never really felt drawn into playing the next level and then the next. It's a superb title that will probably be easily overlooked as it is quite unassuming, which is a shame for those with a hankering for something stealth centric on their portable consoles.