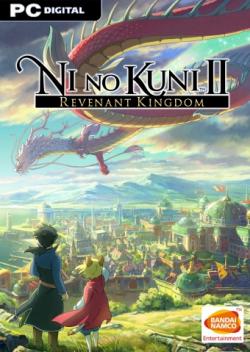 Single player
Local Multiplayer
Online Multiplayer
Co-operative
A coup, a young king, a new kingdom and a magical world: this is Ni no Kuni II: Revenant Kingdom! Join young king Evan and co. in adventures across a fairy tale land and help build a united kingdom where everyone can live happily ever after!

With the need to get my JPRG fix and considering the hype around the game (we were even invited to the game’s press event held in Anne Boleyn’s castle!), Ni no Kuni II: Revenant Kingdom piqued my interest quite significantly. I was also happy to learn that playing the first game in the series wasn’t a requirement to pick this one up as I haven't played Wrath of the White Witch. So I dived into this game with an open mind, not really sure what to expect save for anime-style visuals and traditional JRPG features...

Following an explosion while on his way to a summit, President Roland wakes up as his younger self in Ding Dong Dell, a magical world filled with creatures and humanoids of different races. Roland finds himself in the room of a surprised young King Evan. They shortly discover that a coup staged by the mousekind Mausinger is taking place. The reason he postulates being to assume mousekind’s rightful place and now the previous regime’s key figures are being persecuted. This sudden turn of events forces Evan to escape from his own castle. 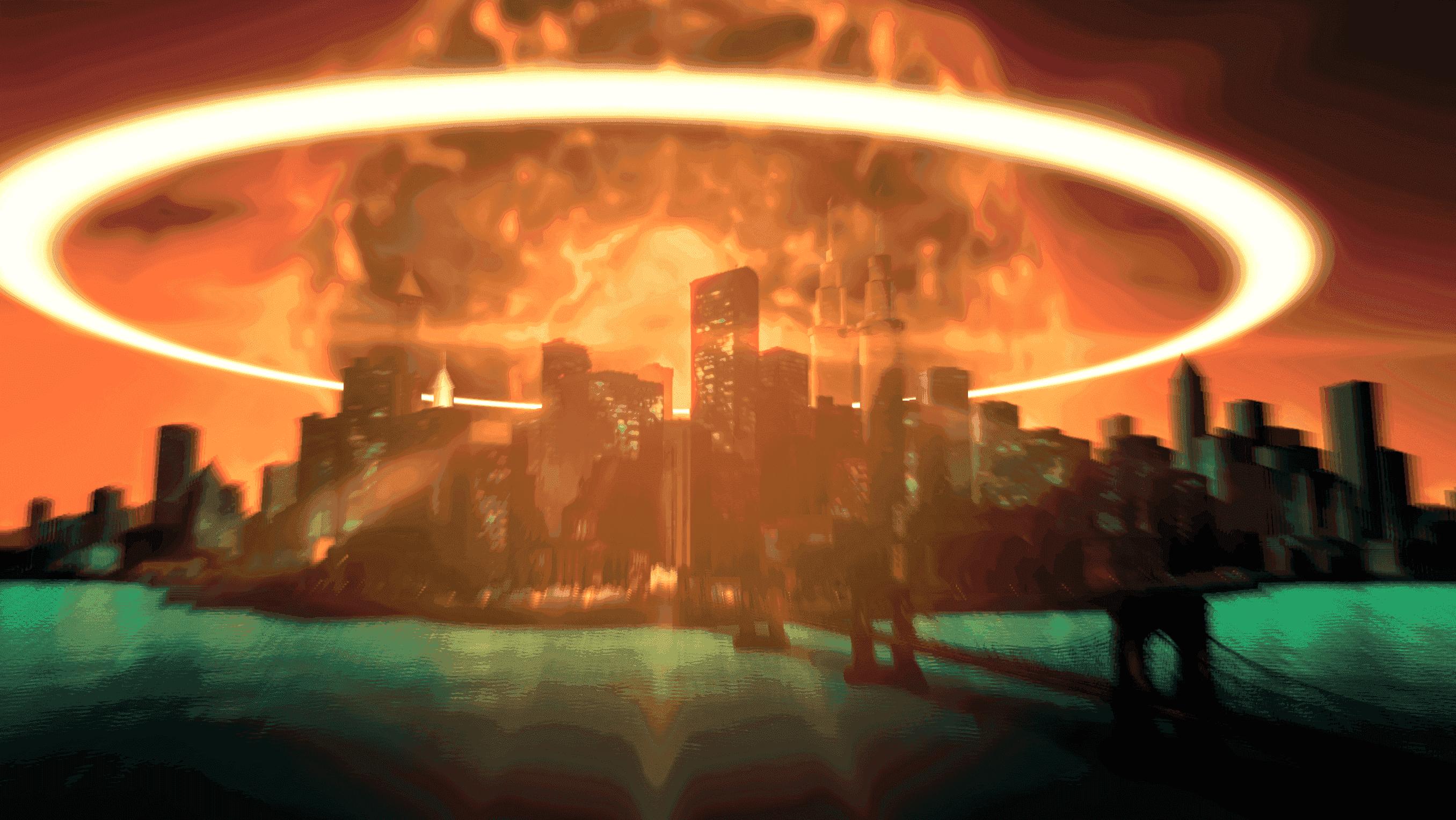 Nevertheless the strong-willed rightful heir does not let his hopes for a better, happier and unified kingdom falter. And so, with the help of many well-wishers, he sets out to build one that exactly fits this description. 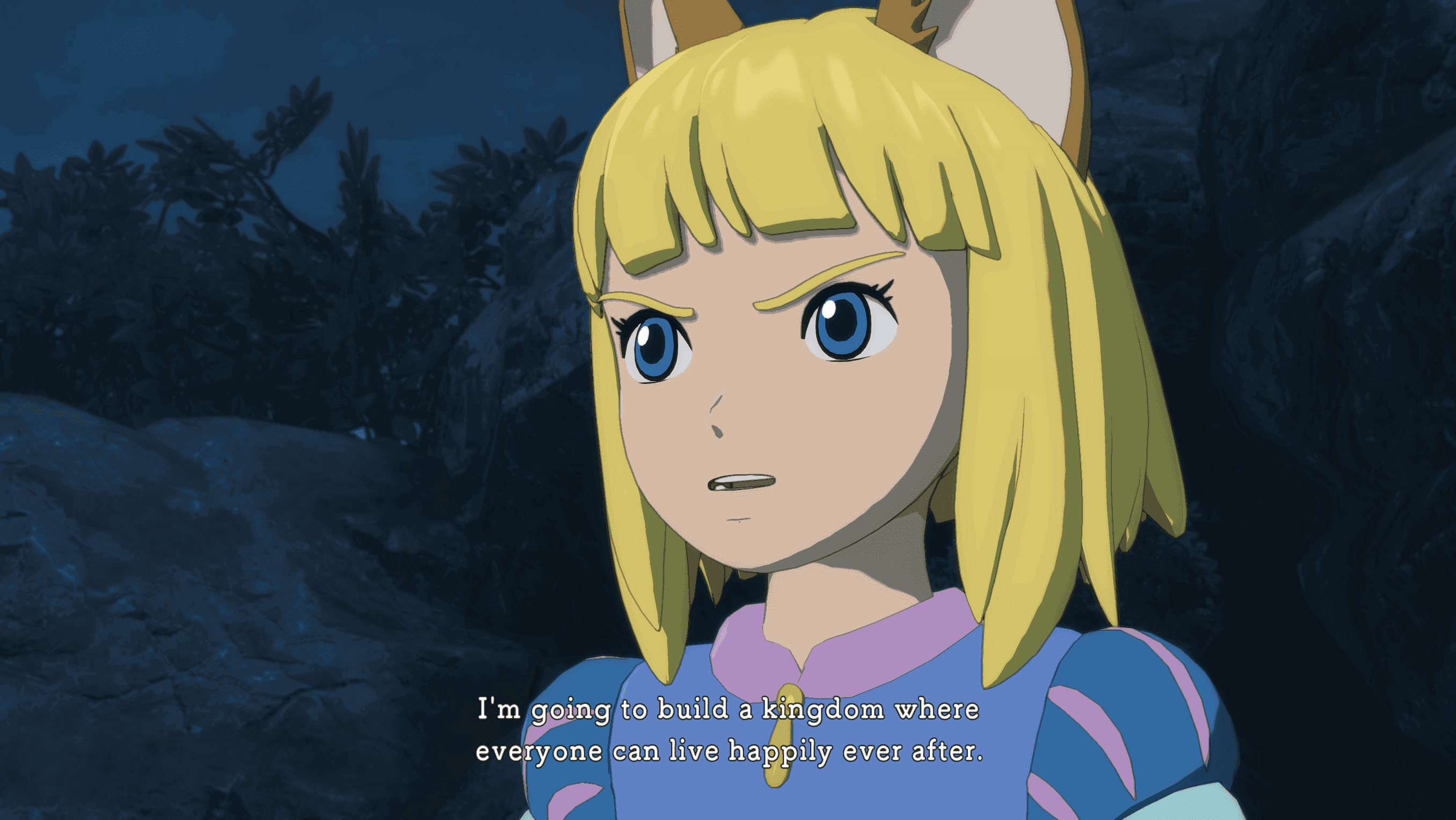 From the visual design, music score and plot, the game could have easily been turned into an anime. Even if this title was developed sans Studio Ghilbi this time around, the inspirations from the iconic animation studio are blatant.

The latter is known to produce visually adorable anime movies that have a deeper meaning to their story line. Ni no Kuni II tries to adopt a similar philosophy with its vivid anime-styled world complete with stunning animation, professional voice acting and beautiful background music. It also features a plot that deals with issues like conflict between races, responsibility and puts into the player’s hands the coming of age story of a king in the making while also balancing more humorous and light-hearted moments. 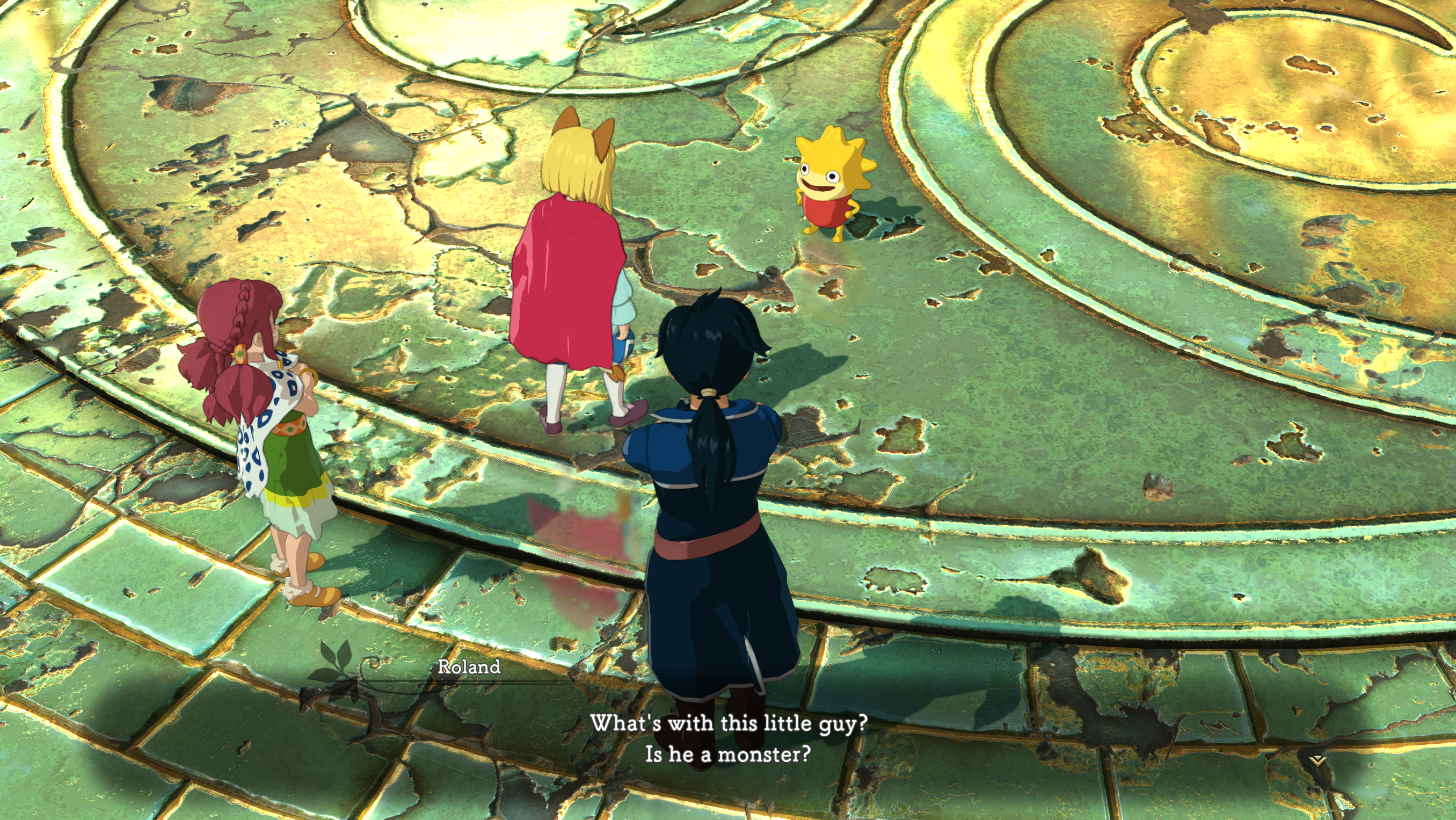 However there are a few dips in the storyline where some key moments feel anticlimactic, like the loss of a main figure or the progression of certain events. Character development is mostly focused around Evan, leaving other more interesting characters with potential left unfulfilled. Some events even raise more questions than they answer--for instance, waking up as his younger self in a world filled with animal humanoids and magic does not at all seem to bother Roland, despite coming from an Earth-like world.

Additionally, if you dissect it, the progression of the story feels a bit dragged out at times. The game will have you running in circles to reach one goal, sending you on several fetch-quests.

With all that being said, these aspects are largely redeemed by the gameplay. The world of Ni no Kuni II is so adorable, vibrant, and detailed that I did not mind running around to tackle side-quests. I loved the attention to details such as the character's hair moving along the wind, or when going higher up into the Sky Pirates’ domain, how it would get more windy and the tents would shake violently, or when a character steps on a stone, they lean their foot upon it. Playing the game on a 1070 GTX GPU only added to the visual treat, though I feel like my screen size did not do the visual experience justice. 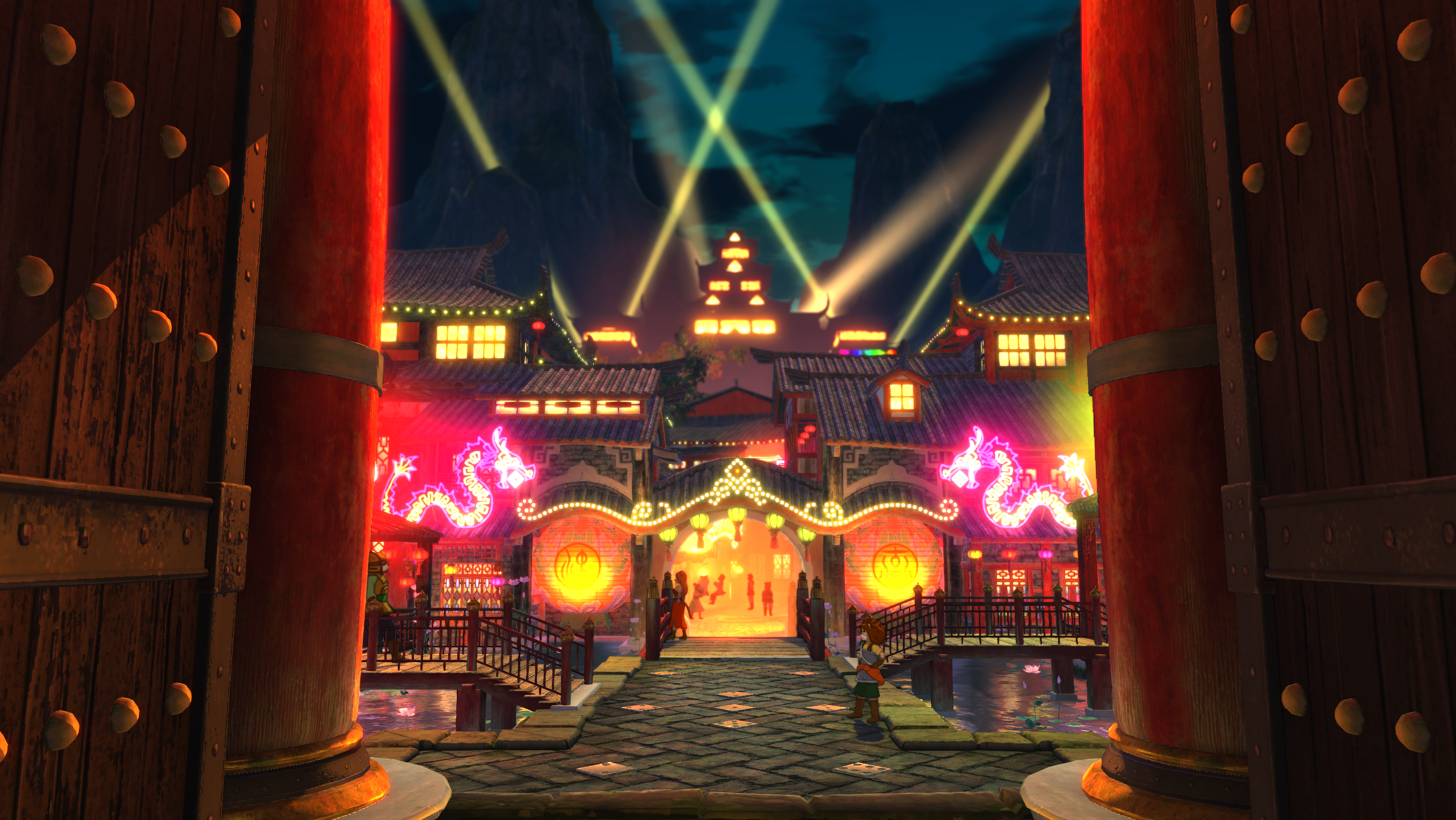 The controls are also intuitive, making for fluid gameplay, and the choice of an open real-time combat system for this title felt all the more dynamic and immersive. The combat involves three of your chosen party members, with the player controlling one character and the others functioning independently. You have the choice of physical attacks with close or long range weapons, as well as magic attacks. Don’t forget to pair up your offense with a good defense by parrying attacks and dodge rolling to reduce the damage taken,  or if things get too heated, you can evade battles altogether to flee from powerful onslaughts unscathed. All of these actions can be performed at the press of a single button, making the whole combat mechanic smooth and satisfying. 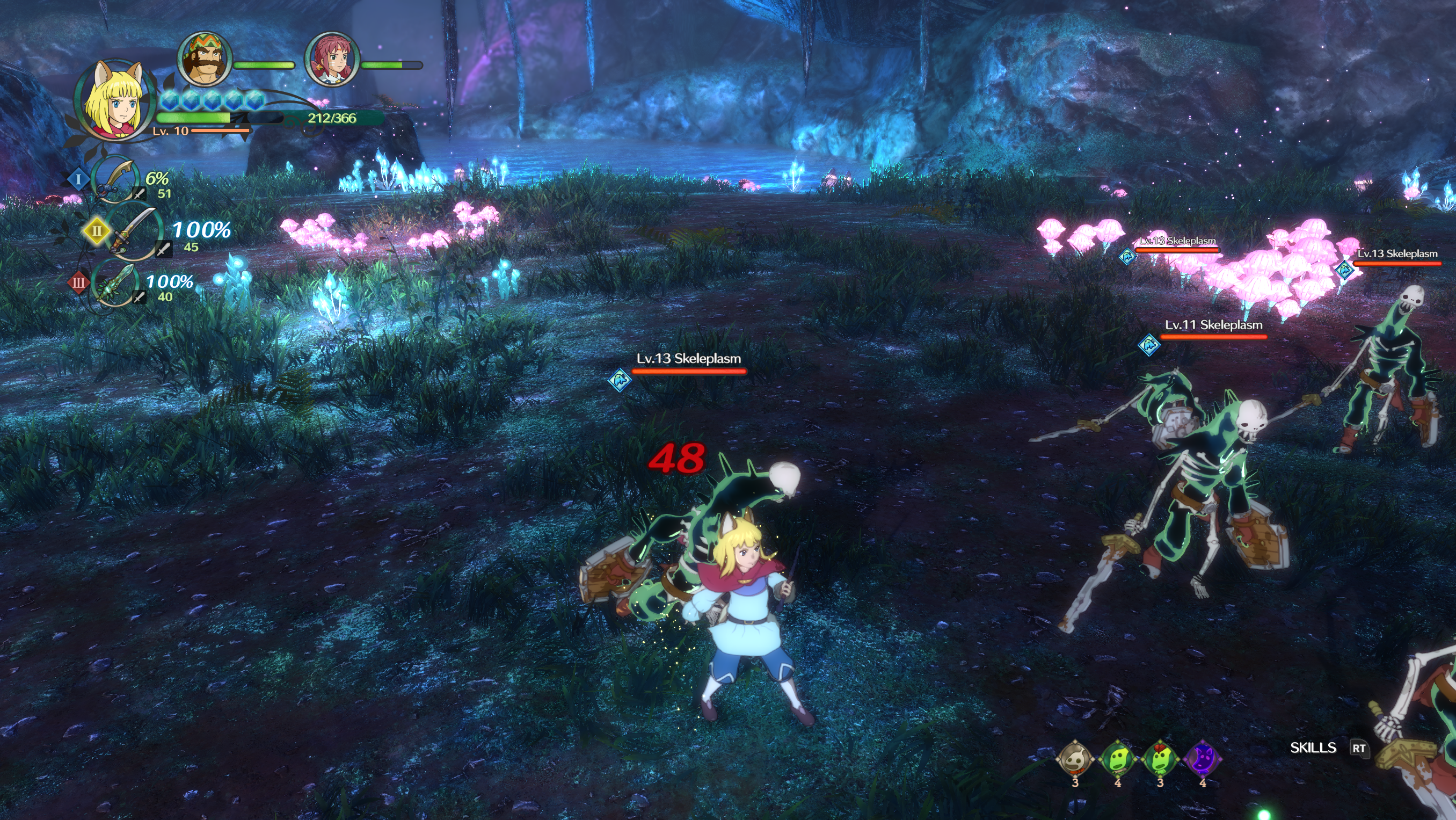 A nice addition to the combat system are the Higgledies. These forces of nature will aid your party in battle by automatically attacking enemies, providing elemental or physical buffs to party members while in battle, and opening shortcuts and new pathways in dungeons and throughout the world. There are 100 unique Higgledies to be collected that will aid you in your quests and some can only be found in hidden areas. 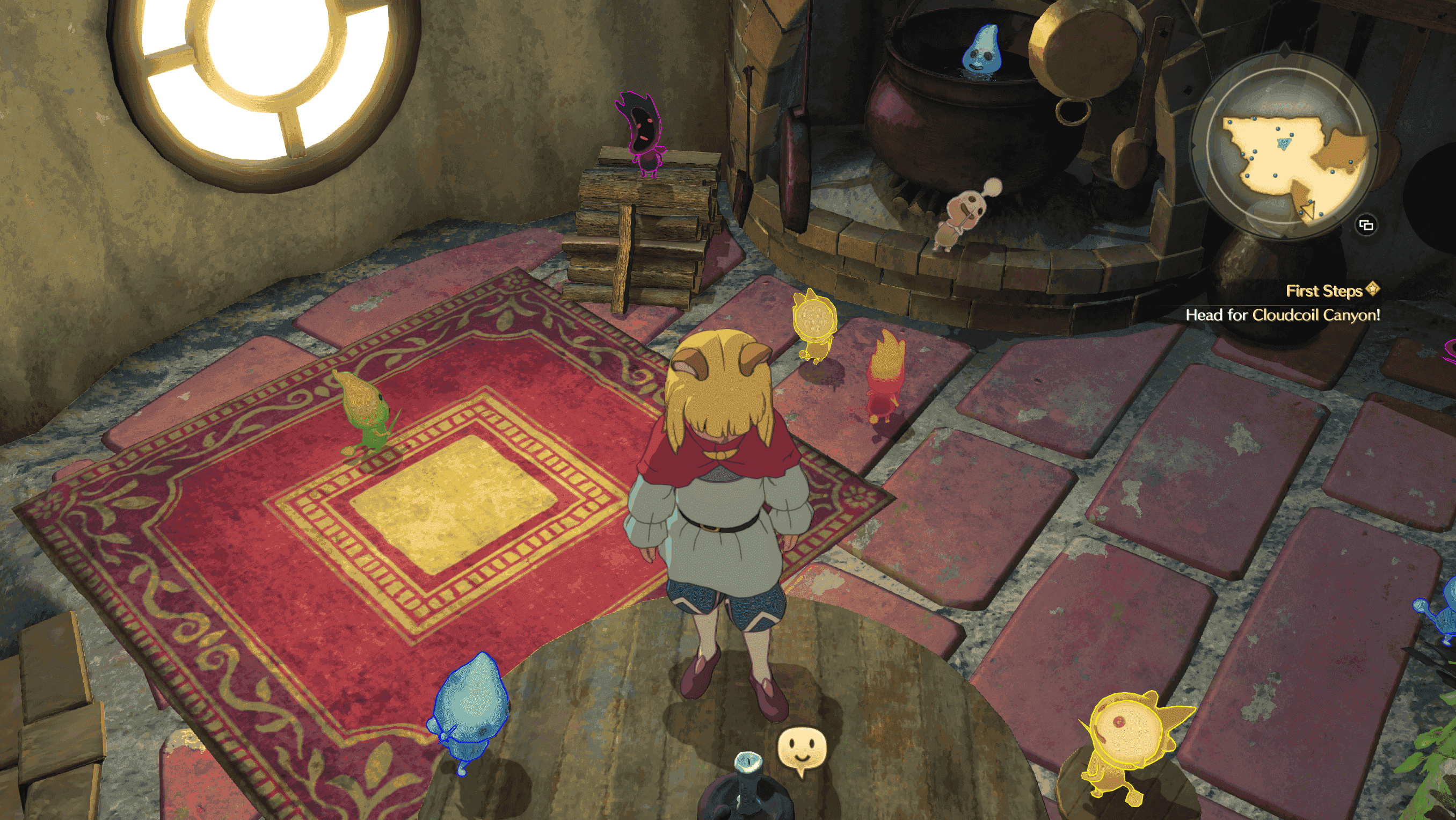 As such, exploration is not only rewarded but also recommended. With its dynamic nature, the game will have you venture across breathtaking scenes throughout the magical land for main and side quests alike. Wandering the land was always a real visual delight for me!

One part of adventuring where things feel a little "off", is with the overworld. The latter substitutes the anime-styled characters for chibi-styled sprites for some unknown reason. This somewhat breaks the continuity of progressing with the adventure as the graphics switch between anime ones to shiny chibi ones when you enter battles in the overworld or when entering a new area.

The same animation style is also used for the game’s other combat system: the odd “Skirmishes”. These are army-on-army battles where you have to take command of up to four units with the aim to guide your troop to victory. These battles are executed in a rather peculiar way by having Evan march with troops and swinging them left and right with the RB and LB buttons to attack opposing troops. The outcome of these battles are determined on a rock-paper-scissors basis and they felt awkward to execute. The Skirmishes are easily one of my least favorite aspects of the game and they are thankfully not too numerous. 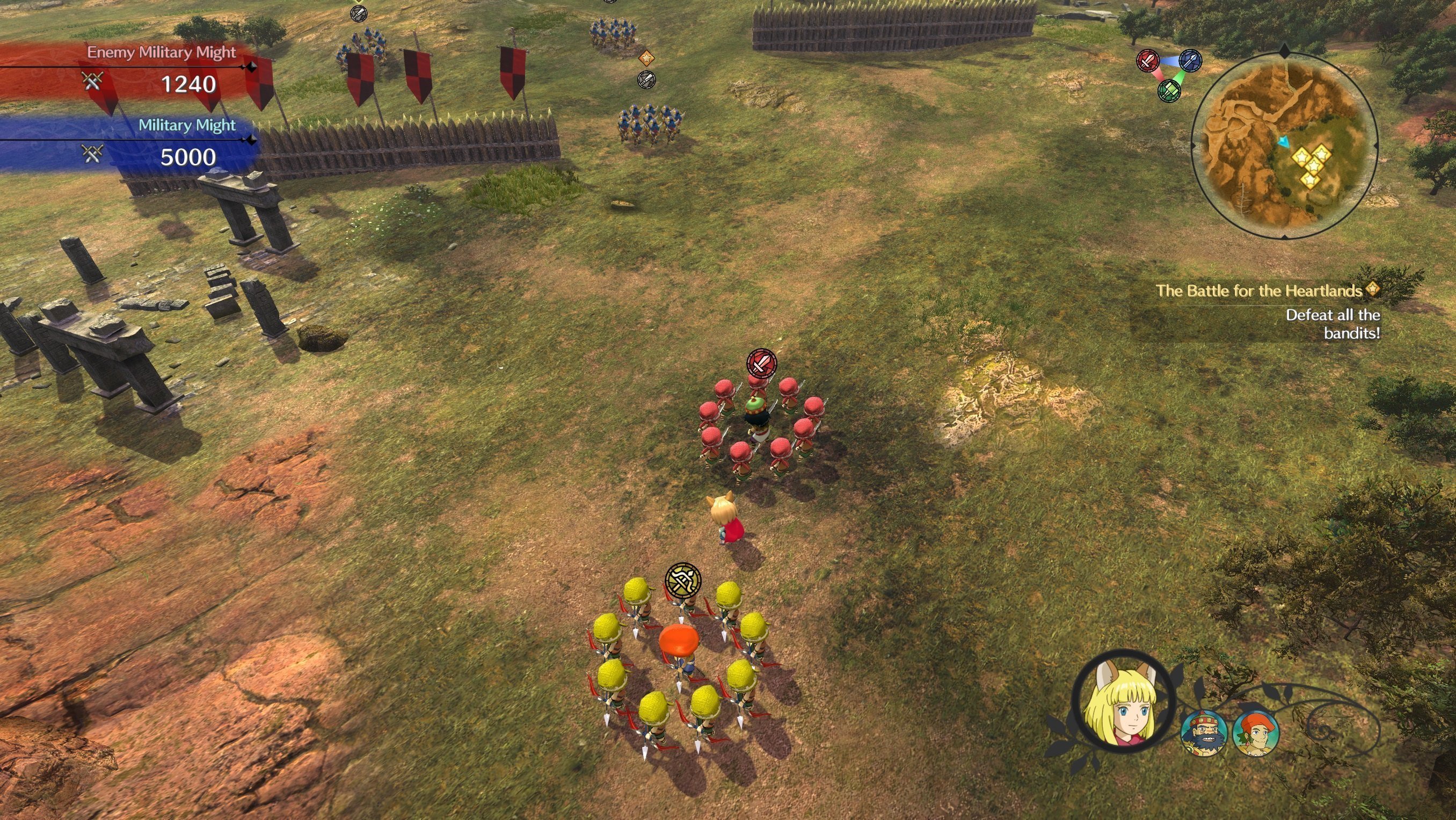 Since you are in cahoots with King Evan to build a new kingdom, Revenant Kingdom enables you to do exactly that. As you adventure throughout the map, you’ll come across people who are dissatisfied with their current situation and want to join the new kingdom. Most of them will send you on side quests in order to convince them to unite under your banner and contribute with their expertise. Each one will be well-versed in specific areas like farming, mining or research, and you’ll have to assign them accordingly to help grow the kingdom. Effectively managing the kingdom-building can aid you in the main questline, by influencing item drop rates, character speed, experience gained in battles, and the ability to craft better equipment.

Of course, being a JRPG, you’ll have a whole gamut of equipment and items to fine tune your party to your liking. The ‘Tactic Tweaker’ allows you to modify combat parameters such as causing you to inflict more damage to a certain monster type, or sensitivity to elemental damage. This adds a layer of depth to the mechanic, but is not necessary to progress.

Actually, quite noticeable in this game is its ease. There are no difficulty settings to up the challenge, so some might find the game a little too lacking in difficulty. I myself prefer a smooth sailing gaming experience, but some more challenging sequences should be required to spice things up from time to time.

All hail the King!

Set in an incredibly beautiful world, Ni no Kuni II Revenant Kingdom had me hooked for hours upon hours every time I started the game, with its fluid gameplay and detailed environment done successfully enough that I could overlook the less favorable aspects like skirmish battles, lack of challenge, and poor character development. It was an adorable experience in a magical world that felt like playing an anime. 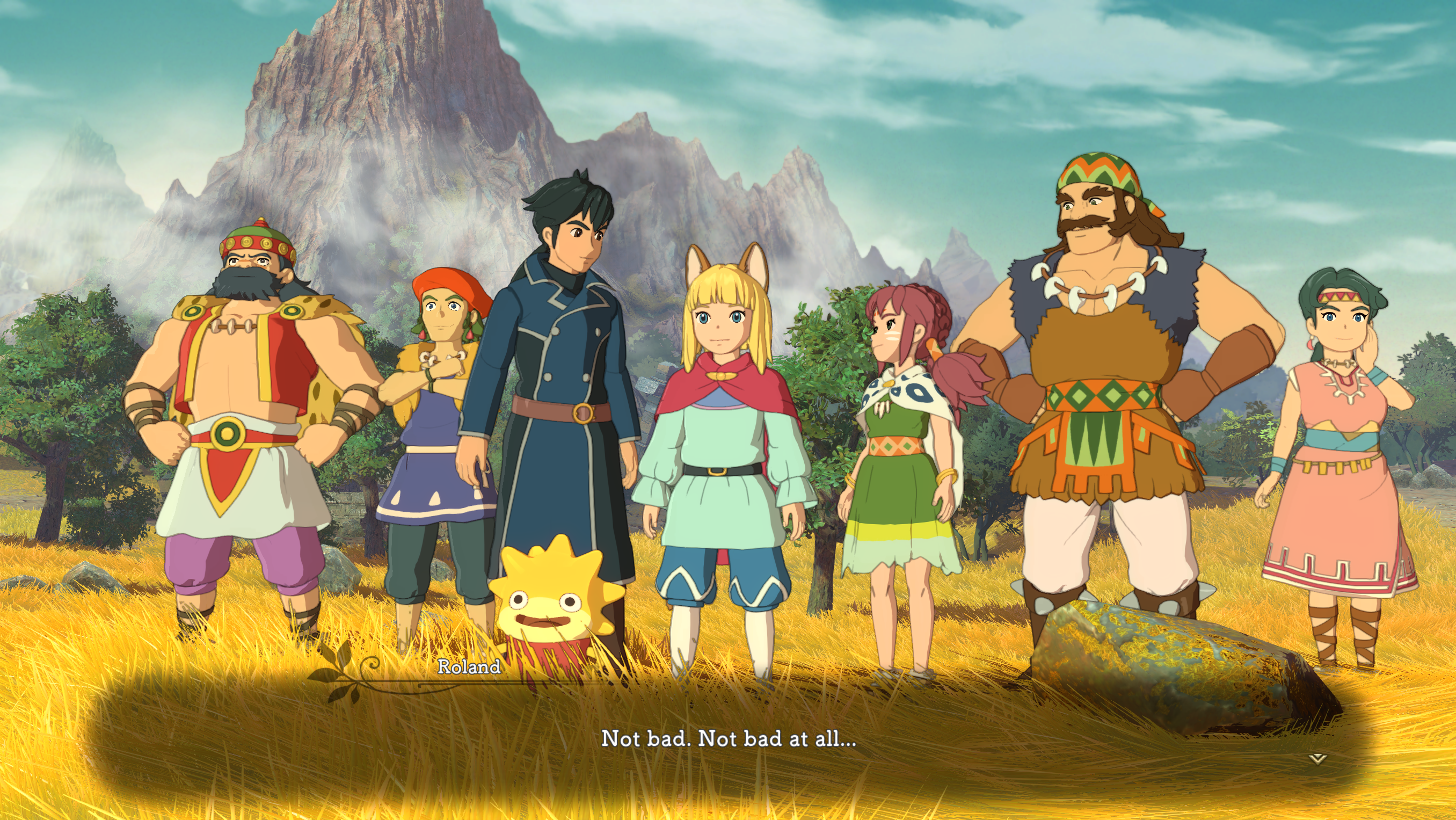 What We Liked ...
What We Didn't Like ...
8
Gameplay
Fluid controls and real-time battles are the gameplay highlights but the haphazard Skirmish battles didn’t quite fit in for me.
8
Presentation
Even if I loved the adorable graphics and beautiful world, some aspects of the plot, poor character development and the switch between animation styles in the overworld felt lacking.
8
Lasting Appeal
Lasting about 30 hours, the time investment is reasonable by JRPG standard and you can always up your play time with various side quests. However the lack of challenge is quite noticeable.
8.5
out of 10

Currently backlogged by a few games, but looking forward to checking this out "
Woah out of nowhere! I completly forgot the Ni no Kuni 2 releasedate!
Be honest, did you beat this game yet?
Reactions: Chizko
Kind of wish it would release on Switch someday. And maybe a remake of the first game
that's Ghibli, not Ghilbli.
Oh, plot it still boring? too bad, that's why I dropped 1st one.
This game looks stunning on PS4 Pro but it's just too easy, making it a bit boring to play through.
Yeah I've played it for a few hours.... it's OK in its own right, but if you go into it thinking it's gonna be as good as Wrath of the White Witch you are gonna be massively disappointed - it pales in comparison from what I've played (and like has been said, far too easy up to now)
Hey level 5 lbx again now please
I have it on my PS3 and I am so getting it on PS4. Stunning anime and gameplay. Patience and relaxing is the key.
https://www.youtube.com/user/jevonrulez16 ni no kuni 2 on low end pc not bad
ni no kuni 2 runs quite well on low end pc
Hold your ass, that blonde chick is a dude?
Hell naw
Man is this game 1. Super Linear 2. Super Boring 3. not fully voice acted. 3. Graphics are super generic other than the character animations.
It is NOT fully voice acted guys. Think Nintendo Zelda games. Single lines may be voiced, but grunts and 1 word lines make out the rest.
that game is a gorgeous piece of art. its a pity they ruined it with lack of character development and a difficulty set for a toddler
Is it as hand-holding as the original?

Got sick of it because Drippy would not stop telling Ollie what to do at every step of the game.

Went back to Lost Odyssey around that time, way more satisfying.
I just want a new Dark Cloud.
I plan to get this game tomorrow. I'm all digital on the switch, and it can't be preordered, so I'll have to wait until tomorrow. after that, it's just metroid dread, then my 1TB micro sd will be nearly full (maybe 20GBs left). I own 167 games, so that might be 169 games on a 1TB micro sd card. damn, that's a lot for something so small.
8.5? This game is a solid 5.5 imho. It's very forgettable and a bland story.