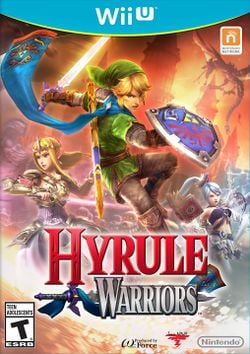 Hyrule Warriors, the Zelda x Dynasty Warriors game that sparked a lot of interest after being shown on Nintendo's December 18th Direct. Its got hacking, its got slashing, and best of all, its got our favorite Hylian Hero Link! Many people were concerned as to what the game would be and how it would feature the characters and the plot of the world of Hyrule. A big thanks to Nintendo for providing the review copy of the game for me, here's my account after diving into the action packed gameplay of Hyrule Warriors. 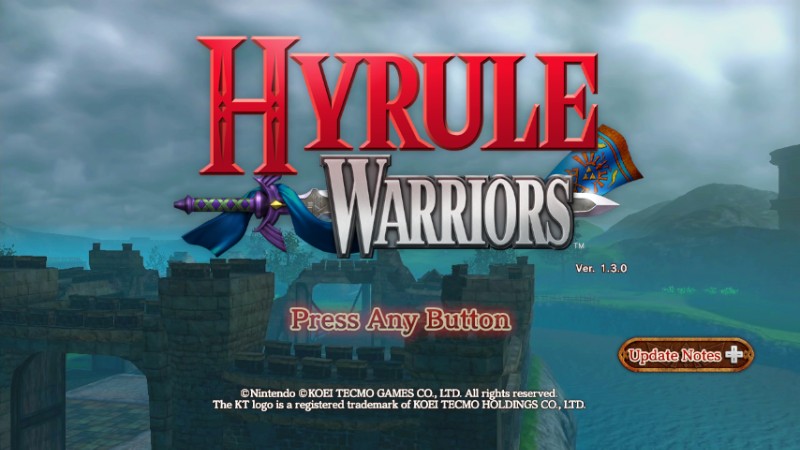 Let's Get This Out Of The Way First... 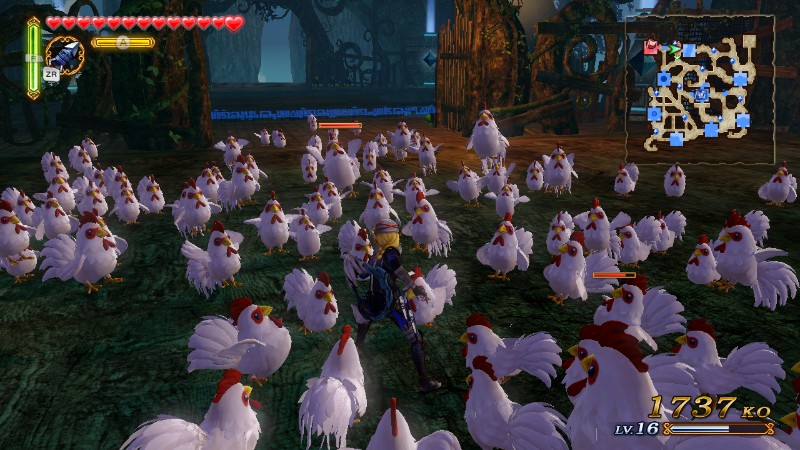 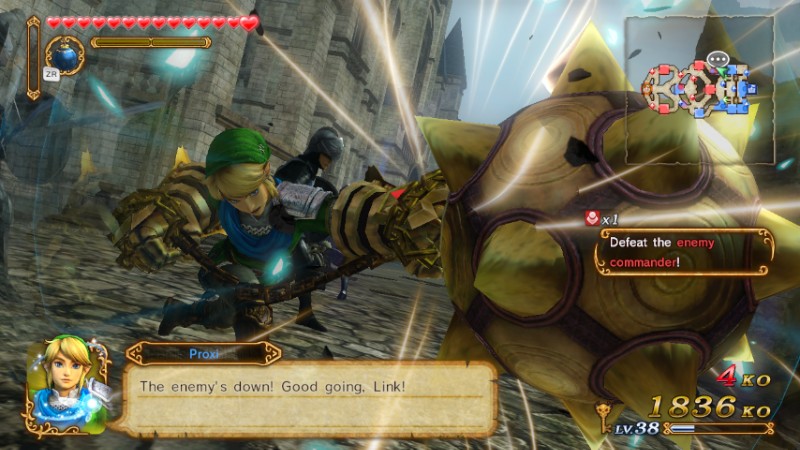 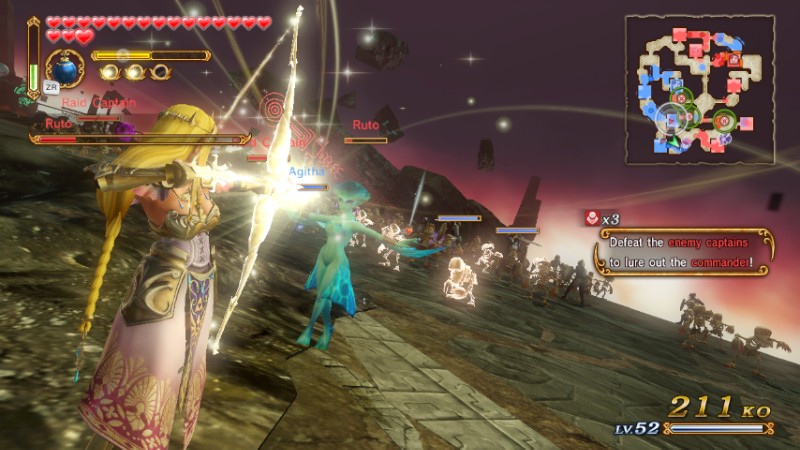 Hyrule Warriors has been lauded by most fans as, "Just another Dynasty Warriors game." In retrospect, they are not incorrect, as there isn't a whole lot of content to really raise the bar from a typical Dynasty Warriors game. That being said, being a Dynasty Warriors game is not a bad thing. Polished graphics and action packed gameplay make Hyrule Warriors an interesting game with a lot to offer for someone interested in the experience. It may not be the Zelda adventure you're looking for, but there's enough throwbacks, fanservice, and classic elements to still satisfy any fan of the Zelda franchise. 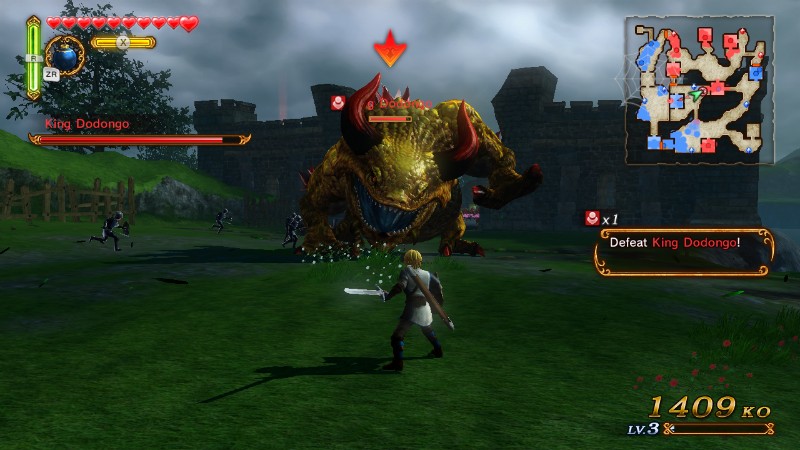 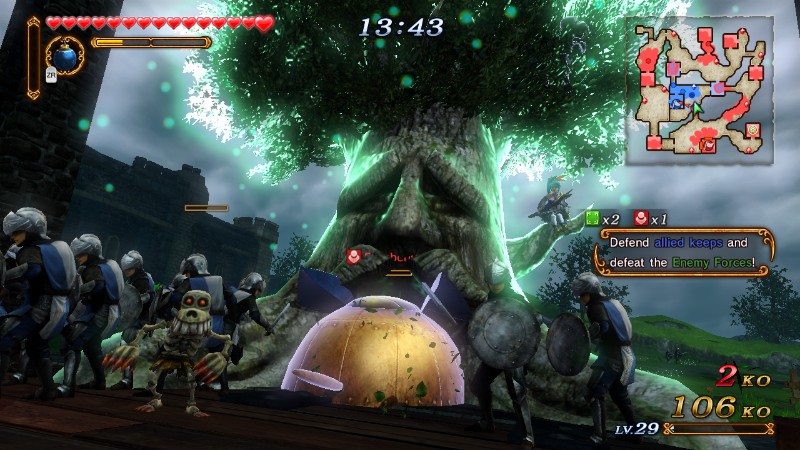 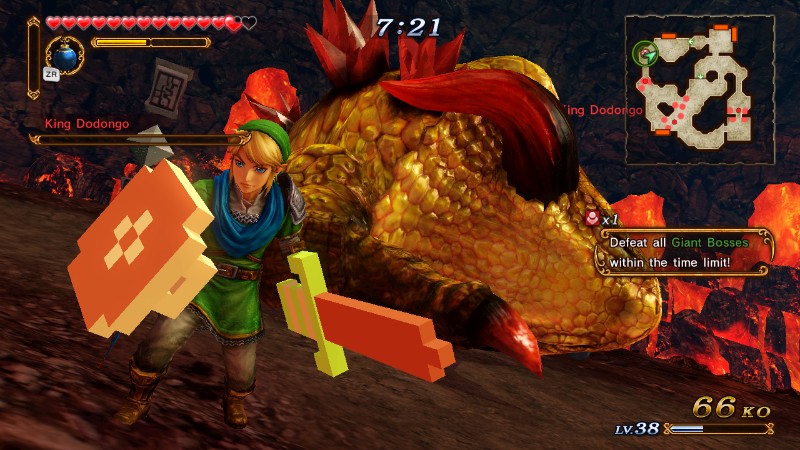 You begin the game by choosing the style of gameplay you are most comfortable with, Dynasty Warriors controls, or Zelda controls. I used Zelda controls for most of the game, but I didn't really notice much of a difference between the two options. Upon entering the game for the first time, you may begin the initital story missions only. More on the other gametypes later.

In story mode, you will begin by choosing one of 16 characters to deploy into one of the 7 chapters of the story. Once you're loaded in, your main objective is given to you, usually along the lines of, "Kill everything." There will be multiple areas of the map that are being assaulted by hordes of enemies, and the mission usually has you begin by taking back/gaining control of various strong points.

Combat is relatively simple, using 2 buttons to perform combos of weak and strong attacks to decimate the horde. The typical horde enemies usually don't pose much of a threat, so killing them can become tiresome incredibly quickly, but once you slaughter enough of them to take back control points or progress, the game will throw more cunning and powerful enemies at you, making you change your hack and slash mindset for a more tactical approach. Fighting large enemies like King Dodongo feels almost reminiscent to playing Monster Hunter, having to use strategy and timed attacks to take them down without getting battered in the process.

Many of the series' signature moves appear in the new combat system, such as Link's Spin Attack, Zelda's Light Bow, or Midna's hand grabs. Each character is able to use his or her particular Special Technique after filling a yellow bar from either killing enemies or breaking jars for yellow light. There is less emphasis on exploration and puzzles and more on combat compared to other Zelda games, but characters can still use popular gear from prior games in the series, such as Swords, Bombs and the Hookshot. These items can serve as weapons, or can uncover secrets on the map, like secret areas, shortcuts, or Gold Skulltulas, which serve as collectibles in the game. Another special usable technique is called "Focus Energy". By filling up the green Magic Bar, the Warrior will enter "Focus Energy", enhancing their attack and attributes.

You can also find various chests in game, a la classic Zelda gameplay, to find pieces of heart and various items. On the subject of items, the game allows you to find various weapons that you can equip to change the style of attack you are able to use. You can use lighter or heavy items that allow you to focus more on speed or power, such as link's Hylian Sword, or his Power Gauntlets. You can also obtain rupees in game that serve to buy upgrades to improve the stats of your character, or buy upgrades for the weapon you prefer. All of this serves to switch up the gameplay experience for you and really helps keep things fresh with the multiple characters and items available. 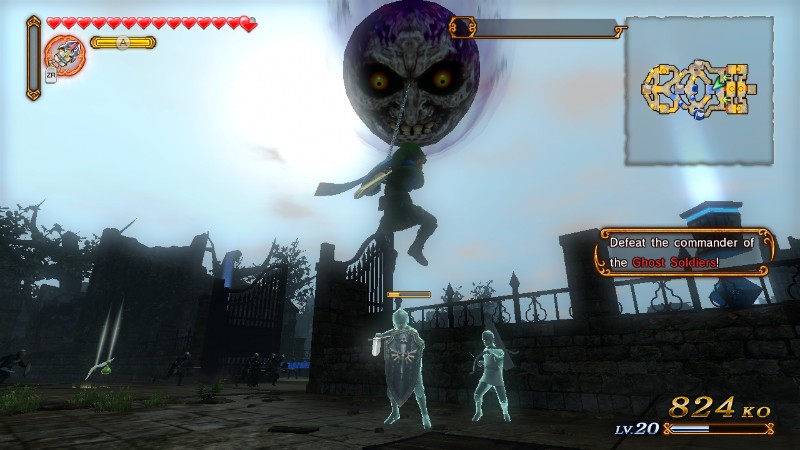 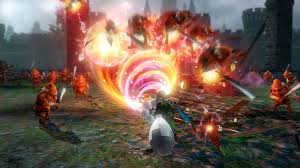 Story wise, the game falls a little short on presenting anything really engaging.

Ganon is plotting his resurrection again, with the help of Cia, a sorceress that protects the balance of the Triforce. Ganon uses her to open the Gate of Souls, a portal to different time space realities of Hyrule. Cia then wages war on Princess Zelda and the various races of Hyrule. Upon meeting on the battlefield, a lone soldier makes his way into the foray and begins destroying the horde, only to realize he possess the Triforce of courage, making him Link, the Hero of Hyrule. Upon defeat of Cia's initial attack, Princess Zelda has gone missing, so Impa enlists the help of Link to search for her. Along the way they meet Shiek, who claims to know Zelda's whereabouts (right in front of you) and Lana, a white sorceress from the same clan as Cia.

The group heads to the Valley of Seers, only to be captured and have their Triforce of Courage and Triforce of Wisdom taken from them and added to Cia's Triforce of Power. This leads to the opening of various portals to dimensions where Ganon's Spirit Fragments lay. In order to restore Hyrule to its former self, Link, Impa, and Lana each lead their own adventure to drive out Cia's armies and close the Gates of Souls in each time period. Along the way, they are aided by each time period's native heroes, including Darunia and Princess Ruto from Ocarina of Time, Agitha and Midna from Twilight Princess, and Fi from Skyward Sword, thus explaining how in the world all these characters can even be together. Eventually 3 of Ganon's spirit fragments release, resulting in the ressurrection of Ganondorf. He then attempts to take Cia's Triforce of Power, only for her to lock him away and restore the Triforce of Courage and Wisdom to their respectful owners.

Link inevitably gets the Master Sword and perpares to confront, and defeat Cia, to restore Hyrule. Upon doing so, the heroes are all returned to their respective time periods. However, with the removal of the Master Sword, the final Spirit Fragment of Ganon is released from the sword, Fully Ressurrecting him again somehow, and giving him the power to summon Ghirahim (Skyward Sword) and Zant (Twilight Princess) to Current Hyrule. Ganondorf then retakes the 3 Triforce, and Hyrule Castle. However, Lana, the embodiment of the light Cia had purged from her by Ganon, uses her power to summon all the heroes of Hyrule from time and space to combine their efforts and defeat Ganondorf. Upon defeating Ganondorf, he uses the Triforce to transform himself into Ganon, leading to the final battle of the game.

The story itself isn't necessarily convoluted, but it bounces all over the place and doesn't really have much of a flow to it, other than the fact that Ganon is a crafty little guy that somehow manages to revive himself in some pretty ridiculous circumstances that the heroes allow to happen. 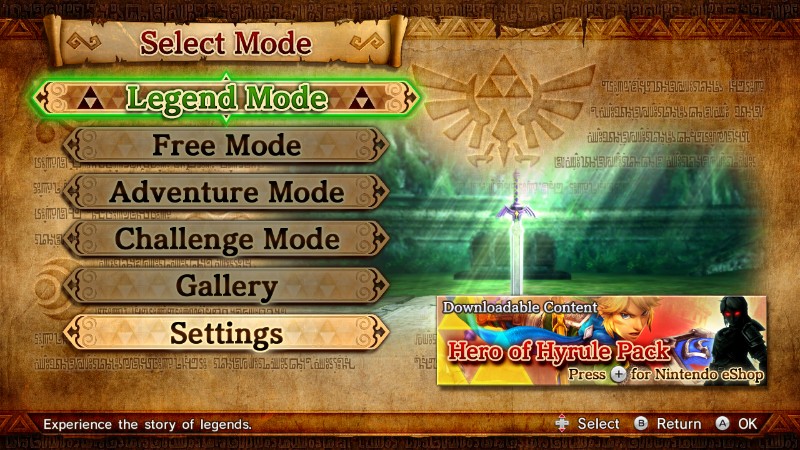 I was very disappointed with the "other" gametypes provided for you in the game. All of them don't really change the experience of the game at all, and only really serve to help you obtain better items and upgrades without having to play through the story.

Free Mode allows you to play any mission with any character. Self-Explanatory.

Adventure Mode allows you to take on missions based on a grid map of the original Hyrule from "The Legend of Zelda". The missions range from defeating certain enemies within a specified time limit, which yield rewards such as weapons, or allows you to unlock certain DLC characters.

Challenge Mode is just adventure mode, but... with heightened difficulty.

While the Game modes don't really offer anything new to do, you can at least play these missions in co-op mode, with one player using the GamePad while the other plays on the main screen. This can at least add some variety to the way you play, and I actually enjoyed playing it a lot more with a friend, but with the lack of online multiplayer, it makes it a hollow effort unless you can have someone over to play with you.

All in All these Game Modes only really add more of the same thing that you could experience in the story, with a little bit of extra difficulty and rewards sprinkled in here and there. While weapons and upgrades are nice, they don't serve as any kind of incentive to really play these modes.