Log in Register
Menu
Install the app
You are using an out of date browser. It may not display this or other websites correctly.
You should upgrade or use an alternative browser.
Official Review PlayStation Vita

Blaze is the hero next door

Fire in the real world is roguish by its very nature. So it seems like such an obvious fit to use fire as the main antagonist in a roguelike game. Dubbed by its creators as a pyroguelike - Flame Over merges the roguelike genre of video games with the roguish nature of fire to create an extremely challenging, fun and unique experience.

You take on the role of Blaze Carruthers, a firefighter working for the City of London Fire Service. After receiving a memo from the station HQ informing him of a fire at a local office complex, the aptly named Infernal Industries, Blaze jumps into his trusty fire engine and heads off to check out the scene.

Flame Over features randomly generated levels which are engulfed with dynamic fire that can rapidly spread and cause permadeath. As you enter each area equipped with a water hose and a powder extinguisher, your task is to put out all of the fires within a level whilst under a strict time limit. Along the way you can rescue trapped workers and their pet cats, which when led to safety will increase your timer and health. Considering you start out with just 5 minutes on the clock and 3 hearts of health, rescuing staff and pets is vital to success. Should you be unfortunate enough to run out of time, things become extremely complicated as you are hunted down by the Grim Reaper, Death himself! 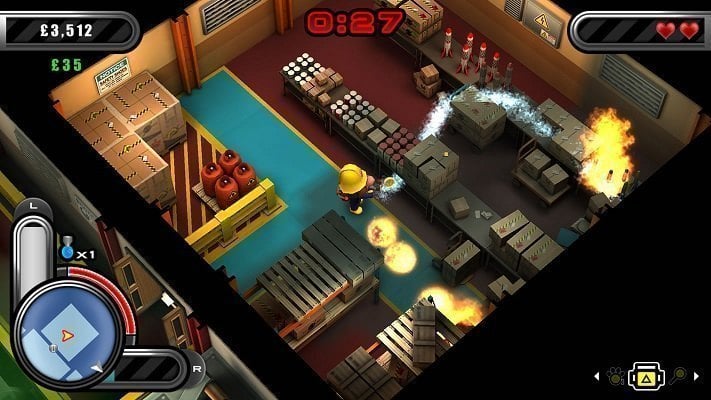 As you make your way up through the complex you will bump into Miss Ion who offers up optional side quests that can be completed as you advance through the level. Miss Ion will reward you with a token for every successful mission you complete, which can be traded in to upgrade Blaze and improve the odds of you finishing the game. For some reason the Infernal Industries complex isn't fitted with a working sprinkler system, so completing missions and upgrading Blaze is the only way you are going to make it through all of the 16 levels.

Dousing flames generates coins which can be used to buy upgrades from the building's caretaker. Purchasing larger tanks, extra water bombs or a defibrillator to resuscitate downed staff all offer much appreciated help in the current run, but do not carry over after death or completion.

Flame Over is hard but does feel fair. If you mess up it's your own fault. The game has a steep learning curve and the only real help you get are from tips that flash up on the loading screen between levels. Even after all of this time playing I still don't know what purpose Catnip x 3 serves.

I played the game for around 10 hours before the stars aligned and I actually finished a complete run. Half of this was spent redoing side missions so I could max out Blaze and survive longer, and the rest was just trying to figure everything out so I could make it to the end. The difficulty ramps up considerably in the third and fourth areas and the chemical fires are particularly nasty to deal with. At the time of writing this review, only 3 people including myself had managed to finish the game out of the 60 or so listed on the online leaderboards. Runs are recorded as complete if you start at 1-1 and play through and finish all 16 levels consecutively to 4-4. My completion time was 1:22:58 which put me into second position, missing out on first place by just over a minute. There's a trophy for finishing the game in under an hour but I can't imagine how you are meant to achieve this without being extremely lucky. 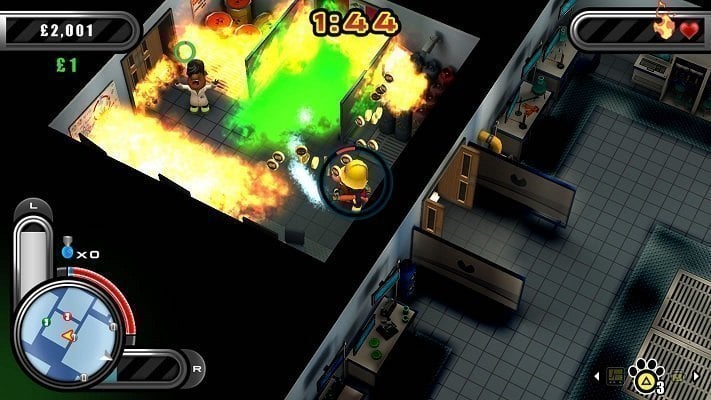 What We Liked ...
What We Didn't Like ...
9
Gameplay
Gameplay is tight and really well designed and most of all, is a lot of fun to play. I don't usually like games that put me on a timer but it makes sense in this instance and weaves perfectly into the gameplay. The learning curve can feel a bit steep until you understand a few key mechanics that are vital to achieving a good run.
8
Presentation
Flame Over is a colourful game with a great cartoon style aesthetic. The fire looks great and reacts realistically and the frantic music is toe-tappingly fun and fits perfectly with the action.
7
Lasting Appeal
When you finally do finish all of the 16 levels, there isn't anything else to do apart from improving your time and score or going after trophies. The trophy set is great though and I'd be surprised if anyone pops the platinum any time soon.
8.5
out of 10

Flame Over is a fresh and quirky experience that I would recommend to anyone that is a fan of the roguelike genre. I've never played anything like it and am already thinking about how I can improve my game.
Reactions: Jiehfeng
Share:
Facebook Twitter Reddit Pinterest Tumblr WhatsApp Email Share Link
The colour of the fire, it's really addictive to keep watching it.
Reactions: LittleFlame
Cool. I'll buy it on discount!
It's discounted on release day by 20% for plus members taking it down to about £€7. A steal at that price.
^
|
hehe Flame
hehe
Reactions: Jiehfeng
Flame Over is releasing on Steam on 28th May 2015 for $11.99 if anyone without a Vita wants to check it out. It's a great game!

@ Dark_Phoras: *shields from Psi* A moment ago
Chat 7