Out of all the fads and features that gaming accessories love to have tack onto themselves, RGBs are my favorite, bar none. If I could make an entire PC out of glowing lights, I probably would, in all honesty. For now, that’s not a possibility, but what is possible...is a gaming keyboard that is RGB, from top to bottom. Epomaker, keyboard madlads of the century, have done it, they’ve created the peak gamer keyboard. Shiny as it is, does it feel as good as it looks?

The Epomaker HS84 is a keyboard with an entirely see-through plastic case, which really harkens back to the way electronics used to look in the 90’s. It’s translucent, with the slightest bit of a frosted look to it, in order to better help diffuse all the RGBs packed into the board. This keyboard goes all-out when it comes to flashy lights--not a single part of it lacks RGB, with the rainbow flow emanating from all sides, top, sides, bottom, everything.

A curious decision on Epomaker’s part was to make the HS84, well, an 84-key keyboard. This means it’s not quite as tiny as a 60%, but it also isn’t as big or comes with the utility of a full-size. The keyboard sits right in the middle, offering you arrow keys and a few navigation buttons, while trying to take up as little space as possible. It’s a divisive choice, and while I enjoy the layout quite a bit, I do find myself being irked by the smaller-than-average right shift key, along with the Alt, Fn, and Ctrl keys on that same side; because they need to be tiny enough to fit in the semi-compact form factor, the keys aren’t spaced like standard ones. That means you won’t be able to fully replace the keycaps with custom ones, unless you go out of your way to get ones for non-standard keyboards, which is a rarity. I understand that it’s just how 84-key layouts work, but it doesn’t make the issue any less irksome. 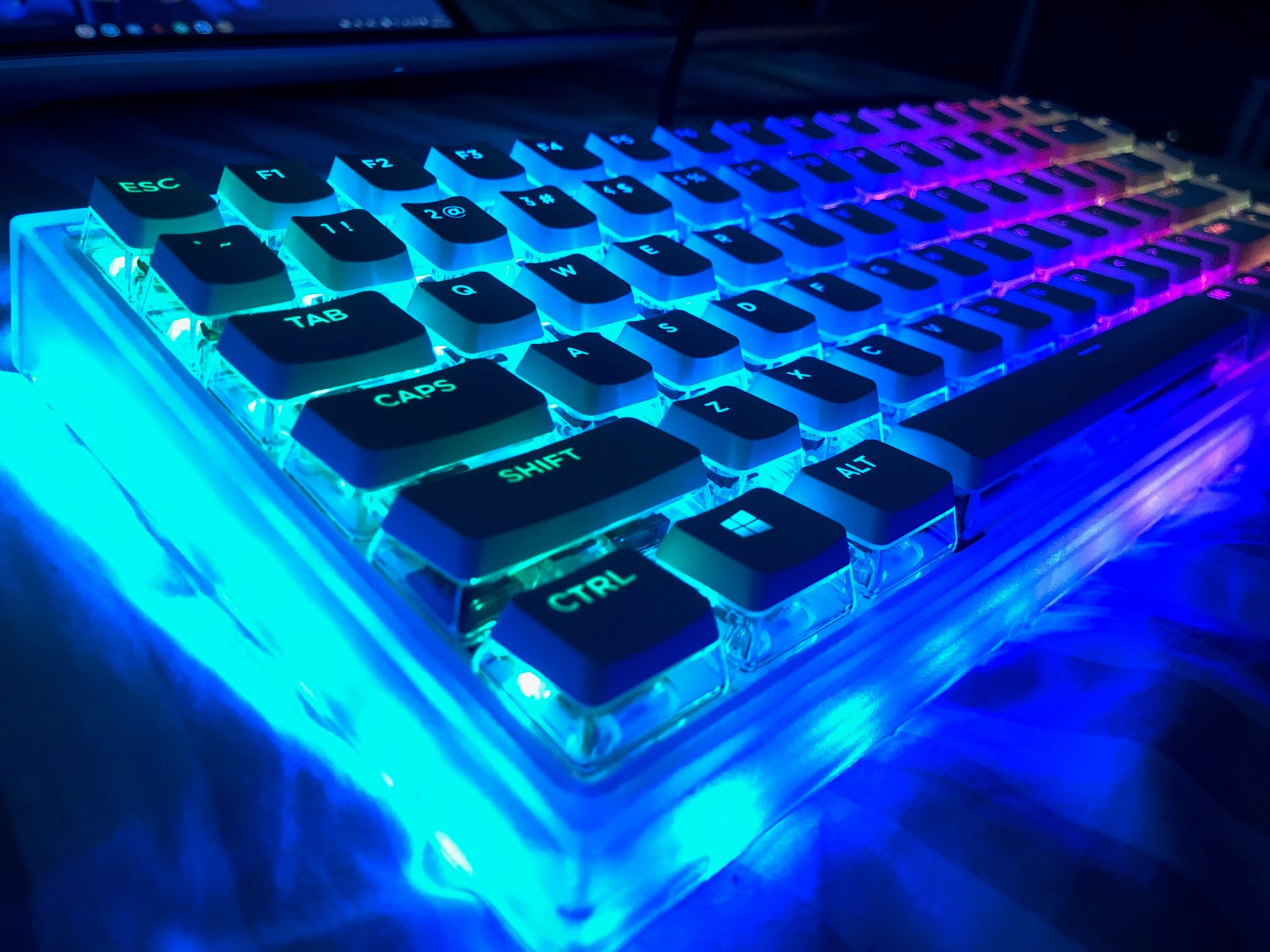 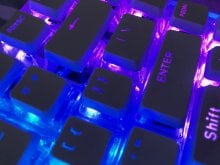 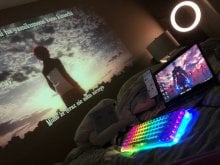 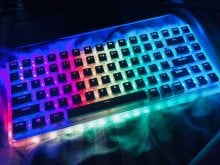 What could have been avoided, however, are a few things in relation to build quality. A lot of keys have an issue with “pinging”, a rattly noise feedback that can be really bothersome. Each time you hit a key, that sound will reflect against the keyboard’s case, resulting in an awkward reverb. It makes a mechanical keyboard, which is already loud enough, even noisier. Worst of all is the spacebar, which rattles a LOT when typing. The saddest part about this, is that it’s a really easy fix for Epomaker to have done; just adding a piece of foam along the bottom of the mounting plate would have remedied this whole issue with hardly any extra work. Luckily, it also means it’s something simple enough for the average person to try themselves, but opening up a keyboard and messing around with the insides can be a scary prospect for a lot of people, regardless of difficulty level.

Instead of using PBT keycaps, this time around Epomaker chose to go with the cheaper ABS kind, which makes sense, because ABS tends to just be better for RGB glow-through anyway. I opted to replace them all at the outset with G Skill’s crystal white keycaps, something I think perfectly compliments the keyboard’s aesthetic, given the whole translucent look it has going on. With bright RGBs, the HS84 is truly the king of RGB, and it shows beautifully well. If you turn the lights down, and turn the keyboard’s lighting effects up, it’ll look like aurora borealis, localized entirely within in your bedroom. This is absolutely the RGB keyboard of my dreams. 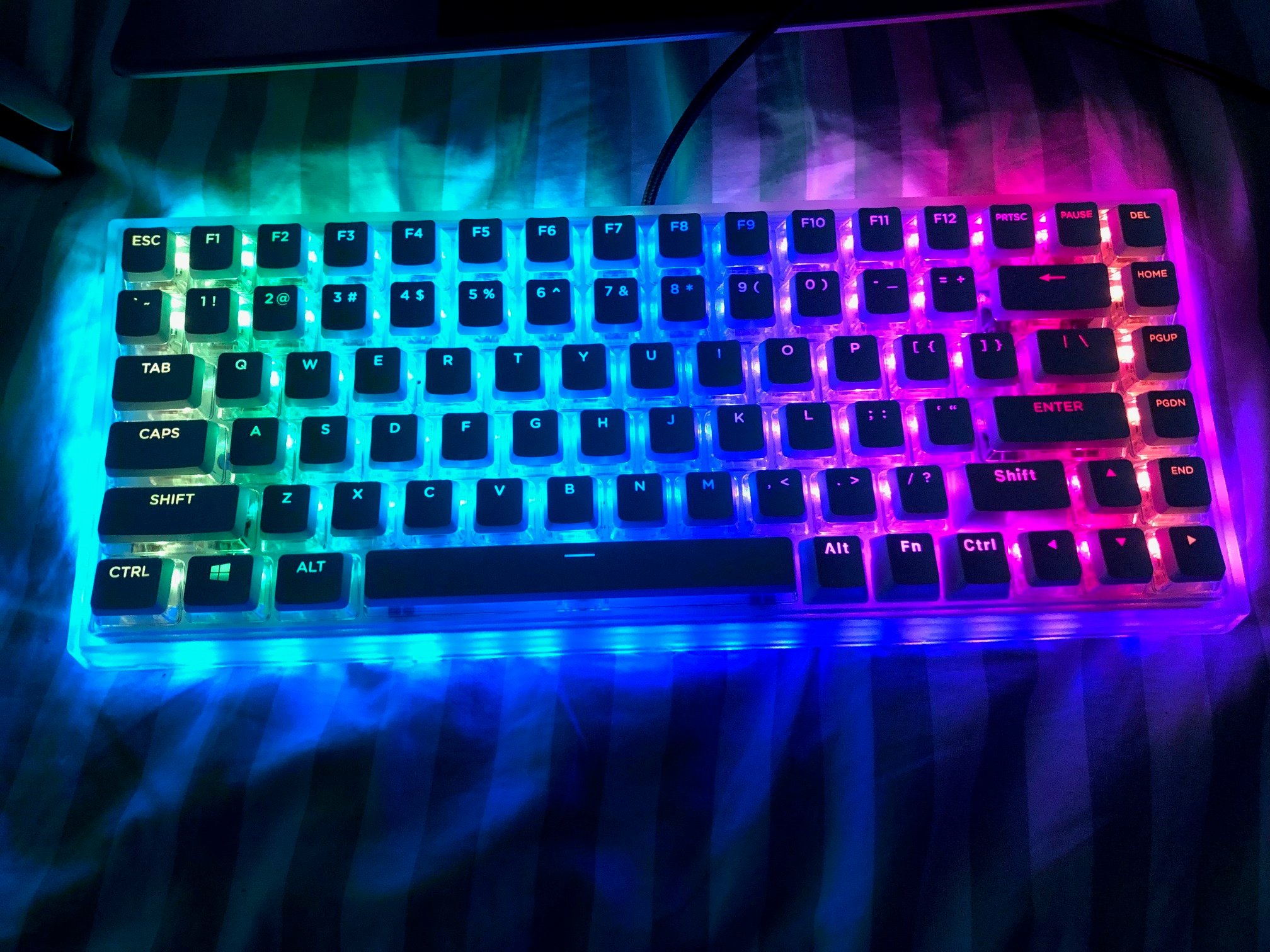 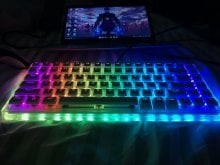 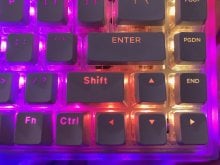 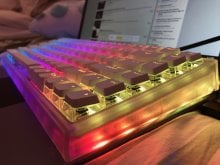 Rocking traditional Gateron keycaps, ranging from the regular Browns and Reds, to the more exotic Yellows and Blacks, you’ve got a lot of fun options to try out. Gateron Yellows are a major recommendation for those that value a linear switch for gaming, while Gateron Blacks are great for typists, giving you a smooth feel, but with a heavy actuation. Even if you don’t like Gaterons, or you just have a unique keyswitch you personally prefer, the HS84 is entirely hotswappable, which is a huge point in the keyboard’s favor. Replacing the switches is a cinch, and lets you really take your little RGB keyboard to whatever crazy extent that you can imagine.

The overall experience of Epomaker’s flashy lightshow keyboard is something so close to perfection; it’s held back by a small handful of really major issues. Having stabilizers that are too loose and a lack of dampening foam really hurt what is otherwise an amazingly cool keyboard. Yet, those aspects are a pretty easy fix, requiring a little bit of know how, keyboard lube, and some foam. The Epomaker HS84 definitely has the look game down perfectly, but if you’re a more experienced keyboard fiend, you might want to be a bit more wary before grabbing one for your gamer room. However, given the price of $74.99, you do get a keyboard that’s great for those just jumping into their first mechanical keyboard, or even those that want to get into modding their keyboards as a weekend project. 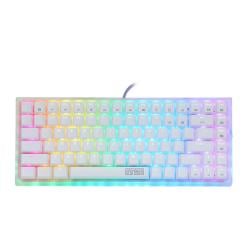