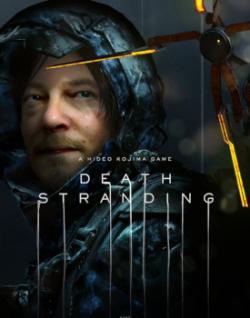 After a cataclysmic event sends the world reeling, Sam Bridges sets out on a trek across America to aid survivors and reunify the country.

Hideo Kojima has long been one of gaming’s greatest visionaries. He popularized the stealth genre with the original Metal Gear titles on the MSX back in the 80’s. His games have always had a strong emphasis on story and cinematics, with Metal Gear Solid widely considered a landmark title in legitimizing storytelling in video games. His writing style is distinct, incorporating complex themes and meta commentary about games themselves, softening the approach with absurd humour and recognizable film tropes. Considering how bold and strange his games are, it’s surprising he’s always managed to pull this balancing act off. At least until Death Stranding, that is.

Given his love for movies and his experience with video games, it’s frustrating that Kojima struggles to reconcile the fundamental difference in storytelling approach between the two here. Death Stranding takes place in a far-distant future after a cataclysmic event has killed most life on the planet and left those remaining struggling to rebuild society. It’s the kind of sci-fi world where random words are capitalized, the words themselves familiar to us but clearly having a whole new meaning here, and it takes its time filling the audience in. This method has been deployed successfully in many high-concept sci-fi movies, where it works because movies are shorter, passive experiences and a mystery surrounding the nature of its world can pull audiences in, with the reasonable assurance that an answer won’t be far behind. In video games, at least ones with roughly forty hour runtimes, it’s harder to tease out information slowly like that; it leaves you struggling to connect with anything and severely impacts your motivation to keep playing, as a lengthy gameplay section is only going to delay getting you your answers. It takes about four hours for Death Stranding to open up, give its players some agency and start explaining the fundamentals of its world. That’s a small percentage of the total playtime, roughly analogous to how long it might take a film to start doling out answers, but it’s too long to spend totally lost in this world. And it simply doesn’t have to be done this way in a video game. Exposition dumps in movies are clunky; in video games, the audience is used to getting an opening cinematic to explain the situation to them. You can even weave bits of lore into the gameplay tutorials if you want a more elegant solution. But Kojima’s passion for film dictates he tell this story like a movie, and it leaves you scrambling for something to latch onto. 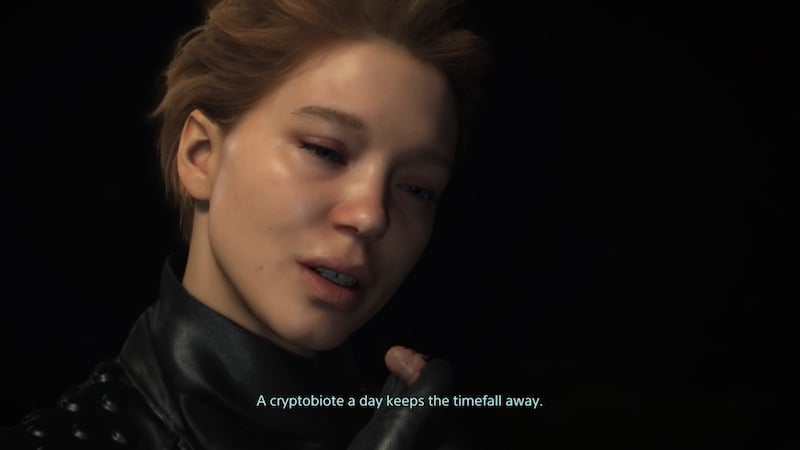 Unfortunately, once the answers start coming they bring with them their own set of problems. Since Kojima is playing in his own sci-fi fantasy world here, there’s a lot of lore to establish and not enough room to do it all efficiently. The cutscenes are reserved for establishing the emotional core of the story, which is smart, but it leaves all the world-building to be done during gameplay. The constant interruptions as you go about your business bring the pace to a crawl, and with Death Stranding carrying a noticeably darker tone than Kojima’s other work, his excessive dialogue doesn't have the humour or campy performances to rely on that it had before. There’s simply too much material to work through here.

Kojima’s scripts have always been needlessly dense, almost unbearably so, but the Metal Gear Solid games used their familiar American spy-movie backdrop to quickly fill in some of the blanks and get you immersed sooner. In Metal Gear Solid 2, for example, it’s easy to get lost in the prattle about the Patriots, the La Li Lu Le Lo and how it all relates to what’s happening on Big Shell. But there was a simple through-line to keep you engaged: you’re a secret agent, and you need to stop all the terrorists on this oil rig. It’s basic, sure, but it’s easy to follow, blends well with the stealth-action gameplay and the cast is charming and outlandish enough to keep you interested until those bigger questions could be answered. That was the key to Metal Gear Solid’s storytelling. No matter how convoluted or insane the overarching narrative became, each game also had its own self-contained story to carry you through. The world of Death Stranding is so alien and the tone is so somber that regardless of what happens any potential impact is lost and it maintains this baseline level of boring weirdness. 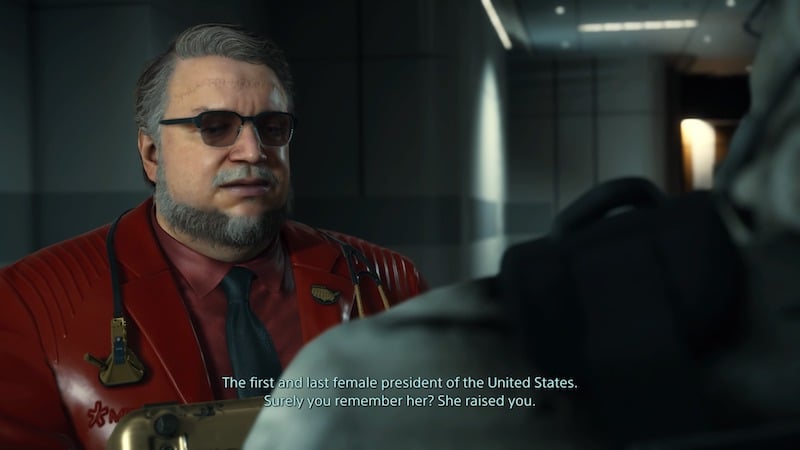 The gameplay can’t offer any respite from the story, either. You are deliveryman Sam Bridges, and as such most of the gameplay revolves around micro-managing the minutiae of getting from point A to point B. The bulk of your time is spent trying to prevent Sam from falling over as the game hassles you to mash the triggers to shift his weight or find his centre of gravity. You can make things easier on Sam by scanning for the least harrowing footpath, but the time spent would never be worth it because you’re constantly facing difficult terrain. These deliveries are only made more frustrating by how clunky and slow Sam is. His movement is affected by how much cargo he’s carrying, but even at his leanest he’s sluggish and precise movements are difficult, particularly when trying to position him to enable a context-specific button prompt.

Ultimately what bogs down the game is the number of systems crowbarred in to give artificial depth to the fetch quests. At any one point, you’re expected to manage Sam’s cargo and equipment placement, cargo container damage, stamina, health, footwear condition, BB stress level and battery levels on various pieces of equipment. You also need to keep an eye out for various building materials along the way, which makes the trips longer as you go out of your way to get them, and also means continuous retreats to the menu to adjust your equipment placement. You’ll also need to remember at what stations your materials are stored, where the structures are that need building, and a few other small annoyances to stay on top of. None of these systems connect to each other in a meaningful way so each one ends up feeling like nothing more than a meter or number to babysit. The game is so obsessed with bogging itself down in various systems that it prioritizes its own pedantry over whether or not these systems form anything fun, cohesive or worthwhile for the player. 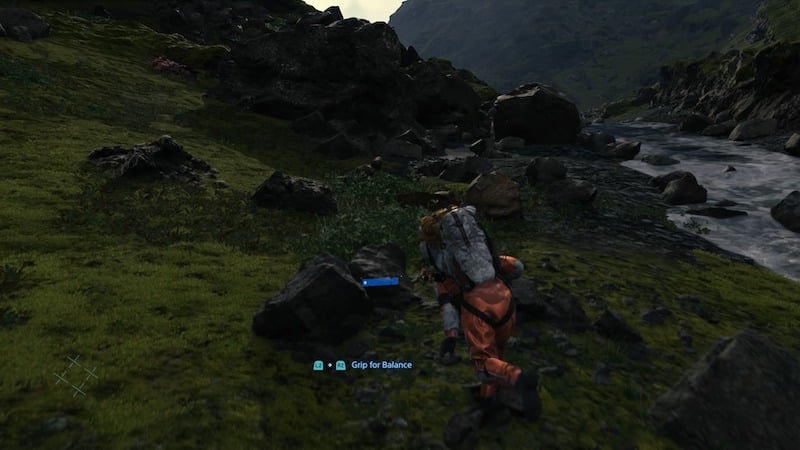 There are also stealth sections where you need to avoid BTs, spectral monstrosities that haunt the wasteland. Removed from the tight hallways and simpler enemies of his previous work, Death Stranding can’t make Kojima’s signature stealth style work. BTs are only visible for brief intervals when you use your scanner and are mainly fought in wide-open areas that they can move freely around, meaning there’s no way to track or avoid specific BTs. Your only real option here is to crouch down and move slowly around the perimeters of the BT area, which is a huge ask for a game that already has such a punishingly slow pace. Of course taking your time will help in any game, but when the only viable strategy is to take as long as possible to complete a task, it’s your patience rather than your skill that’s being tested. There are options for defending yourself, but they can only buy a small amount of time and aren’t suited to taking on multiple BTs at once, which you’ll typically be facing. It’s a shame because the BT sequences are genuinely creepy, the lighting and music darkening to make these areas feel distinctly unwelcoming. The BTs are well-designed too, their loose humanoid shape giving way to a gooey mound that envelops and pulls Sam down. If they were engaging from a gameplay perspective the direction would elevate these moments to nightmarish levels, but as it is it’s hard to appreciate the craft when you’re rolling your eyes at having to trudge through another tedious obstacle.

If you can get your hands on a vehicle, it changes the game significantly and makes some of the more positive aspects come into a clearer light. Trucks allow you to stack massive amounts of cargo and complete multiple deliveries at once. They’re fragile and can’t handle rocky terrain too well, but the roads are decent enough to get you where you need to go, especially if you put in the work to repair them with scavenged materials. With most of the moment-to-moment hassles not present while driving, the game takes on a strangely zen feel - almost like a post-apocalyptic Euro Truck Simulator. Trying to find the most efficient route is fun, and it’s satisfying to get so many runs completed at once, even if that satisfaction mostly comes from knowing how gruelling it would be to try and do that work on foot. Navigating with a vehicle takes enough thought that you’re not totally on auto-pilot, but it’s never really challenging either, making it perfect for mindlessly decompressing after a long day, or if you need something to do while listening to a podcast or music. Given this game’s pedigree, however, it’s disappointing that this was the most enjoyment I could wring out here. 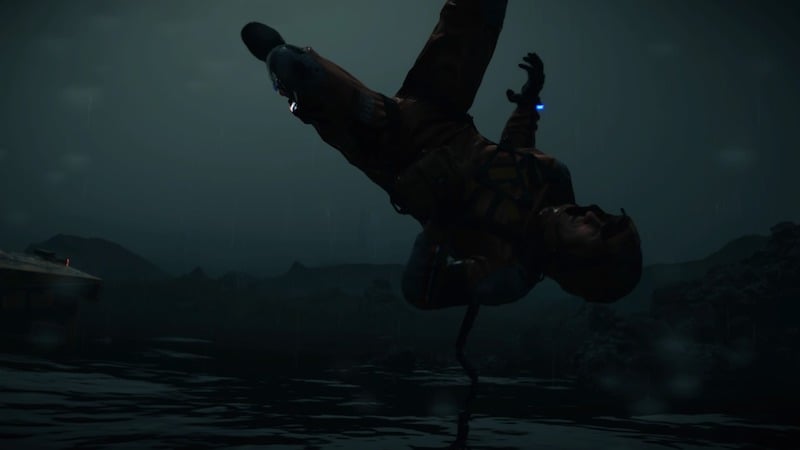 As I worked my way through Death Stranding, little improvements kept being added that I thought might finally make it click with me. When I was first allowed to choose my own cargo and deliveries, I thought it would help immerse me in the world, but it only made it clearer how tiresome the deliveries are. I thought vehicles would improve the glacial pace, but it only made the game seem more lifeless. With each obstacle that was stripped away, instead of the experience becoming smoother, I only found more issues at its centre. And when the game stopped offering these life preservers, I realized I’d reached the hollow core and that it would never be what I wanted it to be.

Despite all of this, I’m still glad it exists. In an industry where most of the innovation comes from indies, it’s laudable to see a game with this kind of budget, marketing push and star power dare to be so strange. I can certainly respect the ambition in trying to make a game that’s entirely fetch quests and that has so many details to manage it deserves the title “walking simulator” more than any other. But none of that makes this any less of a failed experiment. I still believe in Kojima as a creator; his strange charm pokes its nose through in some of the side characters and there are hints of his better writing tendencies peppered throughout the game. With that in mind, Death Stranding should just be written off as a learning exercise that will hopefully serve as a stepping stone for greater things to come.