Have you ever wished that your Nintendo Switch had a unique flair, or just an extra pop of color? We're taking a look at dbrand's solution to that problem; a safe and stylish way to spice up your console's appearance.

When the Nintendo Switch first launched, it was a pretty hot ticket item, with North American stores being sold out in droves. I scoured every retailer in my city, in hopes of finding the elusive console hidden on a shelf somewhere. Finally, a store managed to have one in stock, but alas, for it was the standard grey colored Joy-Con package. Though mildly disappointed at the less colorful variant at the time, I was still happy to have a Nintendo Switch at all, and I still am. However, whenever I picked up my Switch to play it, I would always notice just how drab and boring the regular Joy-Cons looked. as opposed to all the different official colors available; the cutesy pink and green, the vibrant red and blue, or even the striking neon yellows. There was always the option of buying a bulky metallic case, shelling out the money for brand new Joy-Cons, or getting an expensive custom-made shell, but I continued to wait, in hopes of an appealing and simple solution.

So, when I got the opportunity to review dbrand's Nintendo Switch skins, I jumped at the chance; I was incredibly curious to see how exactly they'd fare, as typical console skins always came off looking like a cheap method of decor to me, but they always offered so many colorful choices. It also helps that dbrand promises their premium 3M adhesive won't damage the plastic housing of the Nintendo Switch, unlike many of their early competitors. With the bevvy of colors and patterns advertised on their website, I decided on the ideal style I wanted for my Switch; tablet, dock, Joy-Con and all. 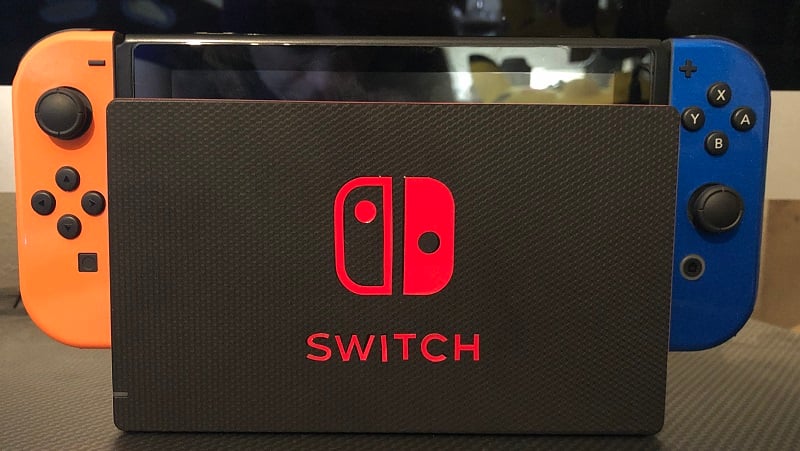 Though I was amused and greatly tempted by Dbrand's yellow and purple "Waluigi" look, I went with a choice that consisted of blue and orange Joy-Cons--the lovely colors of Tempy--and a sleek black matrix and red combo for the dock.

To my surprise, when I pulled open the packaging, I found an extra PlayStation 4 skin, to further showcase dbrand's products for the more traditional console owner. That wasn't the end of things, however; nestled behind it was a large print of GBAtemp's logo! Made with a raised design, and presumably using a d-pad and button skins for Tempy's face, it looked fantastic. I'm not quite sure who over at dbrand decided on packing that bonus in, but I was instantly impressed at the care and time it must have taken to create it. 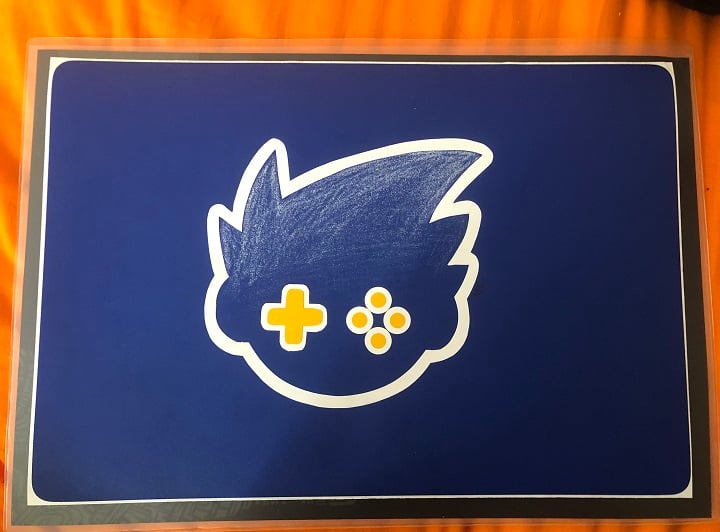 Applying the skins was something of a daunting task, initially. Having clumsily misplaced stickers and screen protectors for my various handheld consoles in the past, I assumed that wrapping the Joy-Cons in the sticky material would be nothing short of an ordeal. That is, until I read the included cards that instructed me to watch the tutorials before doing anything. One short-yet-detailed YouTube video later, and I had placed the skin on both Joy-Cons with incredible ease. Dbrand has made the process as fool-proof as possible; you simply peel off the skin from the paper, follow along with what you're watching on screen, and you're done. Every skin appears to have been placed strategically on the backing paper with the specific intent of ensuring that you'll be able to apply it with as little worry as possible. For the Joy-Cons, there's a flap that you can line things up with, on the dock, there's a strip that allows you to take it nice and easy while sticking it down along the edges of the system, and on the console face skin, you place it on the non-stick side of the paper to help guide it into place. There were a few bumps on the Joy-Con skins, but merely grabbing a hair drier and using a bit of heat while lightly pressing down fixed any imperfections.

Once everything had been applied, I was quite impressed! Rather than appearing to be a vinyl skin, the glossy shine of my newly colored Joy-Cons made them look as if I'd precisely painted them, or used an impossibly thin metal case. The colors are nice and vibrant, and there were no visible gaps or air bubbles, as they had been flawlessly attached. I slightly expected to have an issue with the tight fit of the skins messing with the pressing of buttons, but not a single button was impacted. As for the feel, the skins are nice to hold, and are smooth, without being too slippery to grip. 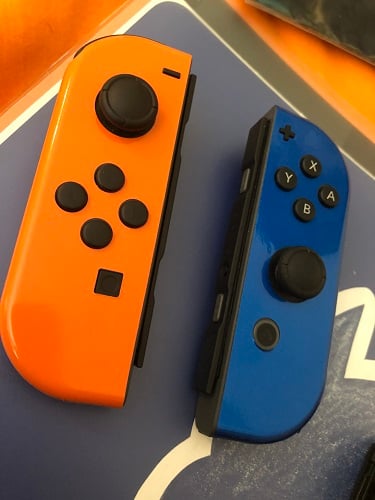 Starting at $4.95 per Joy-Con, the prices are more than reasonable, as you're getting a decal that's guaranteed to not damage the controller's housing. It's also a much more sensible option for those that want to give their tech some extra personality without adding extra weight from clunky cases or don't want to go through the trouble of taking apart the system to paint it.  If you want to get decked out in skins for the Joy-Cons, dock face and accents, and the console, it'll run you a tick under $35. Other consoles such as the PlayStation 4 (Pro) and Xbox One (X) tend to have far more colors and materials to choose from, with wood, leather, metal, and "dragon" among the list of interesting skins. There are also skins for the DualShock 4, Xbox One gamepad, and Switch Pro controller, so your accessories can match as well.

If you're like me and have always dreamed of giving your Nintendo Switch a makeover, dbrand offers a fantastic set of console skins that'll really make your system pop. Not only are they easy to affix, but they also have a quality look and feel to them, whether it's the smooth standard colors for the Switch, or the more textured kind on the PlayStation 4. Boasting a nice selection of colors, a simple application process, and a snug fit, you couldn't possibly ask for more from a console skin. 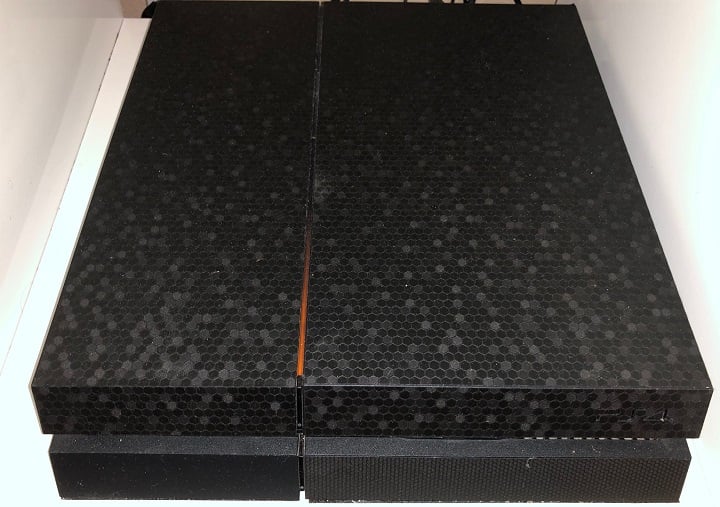 Affordable, simple, safe, and perfectly form-fitting, dbrand has mastered the art of console skins. If you're looking to give your system its perfect makeover, you won't go wrong with this.
Reactions: Taffy, Owenge, matpower and 17 others
Share:
Facebook Twitter Reddit Pinterest Tumblr WhatsApp Email Share Link
I got this but in camouflage and it looks great with a phone
Reactions: Chary
If it's a 10 from you, it's a must buy. Gonna order some skins now!!

Edit: PROOF
Reactions: JavaScribe, Mnecraft368, NoNAND and 2 others
Plastic to plastic: they look gorgeous!
Reactions: Chary
Huh, for some reason I never noticed that Tempy is Broncos colors before. I knew there was a reason I liked this site.
Reactions: Chary
That custom Tempy is just too cool

The only trouble I would have with these skins, is to settle for a design
Reactions: Victorum, NoNAND, TheTechWiz25 and 2 others
Thank you Chary for pointing this out to me! I just ordered myself some skins for my PS4 Slim. Titanium for the top and controller, Blue Carbon for the bottom. Although I do wish they had skins for the PS3 console and not just the controller.
Reactions: lordelan and Chary
I need to get a skin at some point.
Reactions: Chary
10 out of f*cking 10? Either they bought you out or this stuff really is that great, wow ...
I'm considering ... Where's my wallet?
Reactions: Mnecraft368 and Chary
This is very nice...i'll be sure to try it out as soon as possible
Reactions: Chary
As someone who tends to avoid giving 10s ever, on a site that would rather give good games a 9.8 just to avoid giving a “perfect” (see tales of vesperia, etc), I think a 10 is fitting for these. They check all the boxes for what a console skin needs to be.
Reactions: Mnecraft368, NoNAND, Zumoly and 2 others
I might get some of those to prevent my switch's wearing joycons from getting worse,
aside that i am getting this to make my switch look more colorful and fancy
Reactions: Chary
How does the decals attached to the joycon feels like to a joycon without a decal on it? That's the main anxiety what I have about decals.

GamingAori said:
How does the decals attached to the joycon feels like to a joycon without a decal on it? That's the main anxiety what I have about decals.
Click to expand...

The normal joycons have that sorta matte feeling, right? The skins have a very smooth feeling to them, but they’re not slippery—the vinyl has some traction—nor do they feel distracting (to me at least). I sat down and played octopath and botw for a while using them, and forgot there was even a difference until I looked directly at the controller. I’m not very picky when it comes to that kind of detail, however. You can also get white matte skins, which I assume would feel more akin to the normal joycon feel.
Reactions: GamingAori
the orange looks amazing, the blue one not so much
amazing how you get it to curve around to the sides
the orange one you see how nicely it curved to the side but not on the blue one , and the blue one has a an imperfection , the red strip on the top of the dock looks like it is coming off too
i would have thought the dock would be the easy part , the joycons look really difficult , lining everything up and curving it around to the side and lining it up with the seem
,but that PS4 skin, (hehe 4skin)
looks like a total dumpster fire, WTH happend?
Yea, if any id go with dbrand, id probably still faster go for a case replacement if there was a high quality one, I made a orange dbz ds like was amazing.
Reactions: Chary
I'm still of the opinion that transparent electronics > opaque, so given the choice I would quickly opt for a see-through shell replacement over even a high quality sticker. 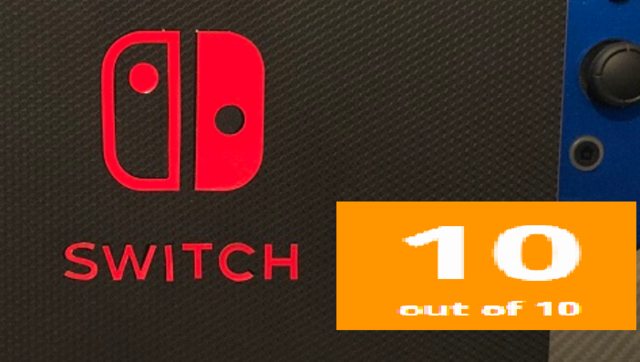 I wish dbrand sold skins for my phone. I might actually consider specifically getting a phone that they sell the Prism for.
I got my PS4 skins yesterday, and applied them this morning. It went 98% flawlessly.

I had a bit of trouble with the "4" inside the PS4 logo on the front. It took quite a bit of effort getting the bottom aligned perfectly properly.

But I succeeded, and my PS4 looks GLORIOUS!!!
Reactions: Chary
Is it possible to buy that custom Tempy? It looks very nice
Reactions: JavaScribe

@ katebeyond: Monster Hunter Stories 2 Save Does anyone have a 100% complete storyline save... 1 minute ago
Chat 1