With its BrainLink line of smart headbands, Macrotellect not only brings tech-aided meditation to the masses but also forays into the realm of mind-control tech. Yes mind-control is real and I’ve tried it. Did I turn into a cyborg? Nope, but it’s one of the most unique experiences I’ve had recently, and I’ll share my experience in this review.

As sci-fi as it might sound, mind-control tech is real if you keep your expectations in check. It won’t let you remotely lift someone else’s arm to slap themselves in the face (yet), but it can let you control other objects. In case of the BrainLink Pro, it allows you to control devices from Macrotellect’s “mind-control series” line of products. I’ve had the opportunity to test it with the robotic arachnid Space Warrior, and I'm here to tell you how it all works.

The BrainLink Pro headband consists of three electroencephalography (EEG) electrodes that detect your brainwaves and is interpreted by a small detachable module on the side of the headband. This module allows you to pair the device to your phone and use compatible apps for meditation or even gaming. By focusing or relaxing, your brainwave patterns change, are detected by the electrodes and these signals are shared over Bluetooth to the app which responds accordingly; but we’ll get to those later. 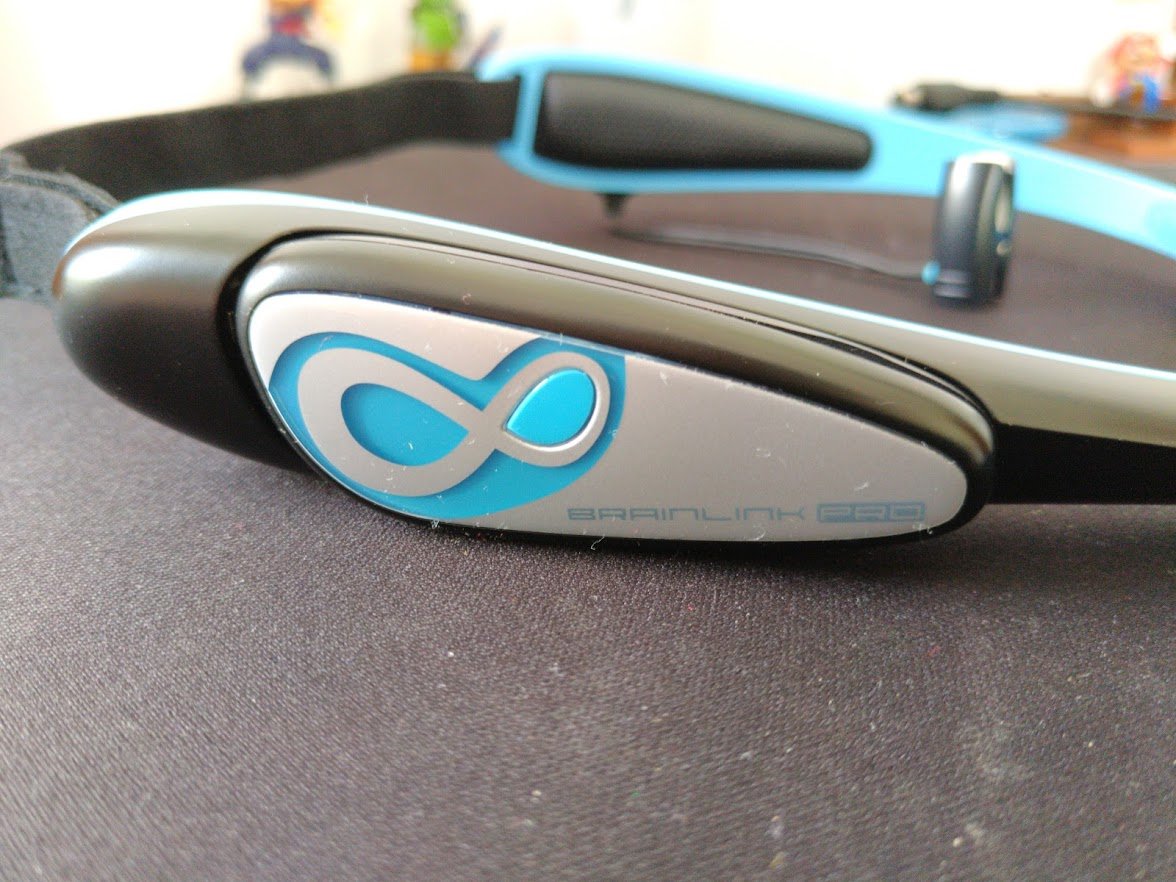 As for the Space Warrior, it is in fact an RC-controlled device. It can function independently of the BrainLink Pro with its remote control, but with the separate control box, it can also be controlled without any physical input. The control box pairs with the BrainLink Pro over Bluetooth and receives signals about your brainwaves and translates these into RC instructions that’s relayed to the Space Warrior.

Relax and the robot moves backwards, increase your focus and the robot moves forwards, and tilt your head to rotate the robot (tilting activates the accelerometer in the  BrainLink Pro’s module). You can also grind your teeth to command the Space Warrior to fire its weapon (also activated with the accelerometer rather than with brainwaves). However, the latter function was more of a hit-or-miss affair whenever I tried it. 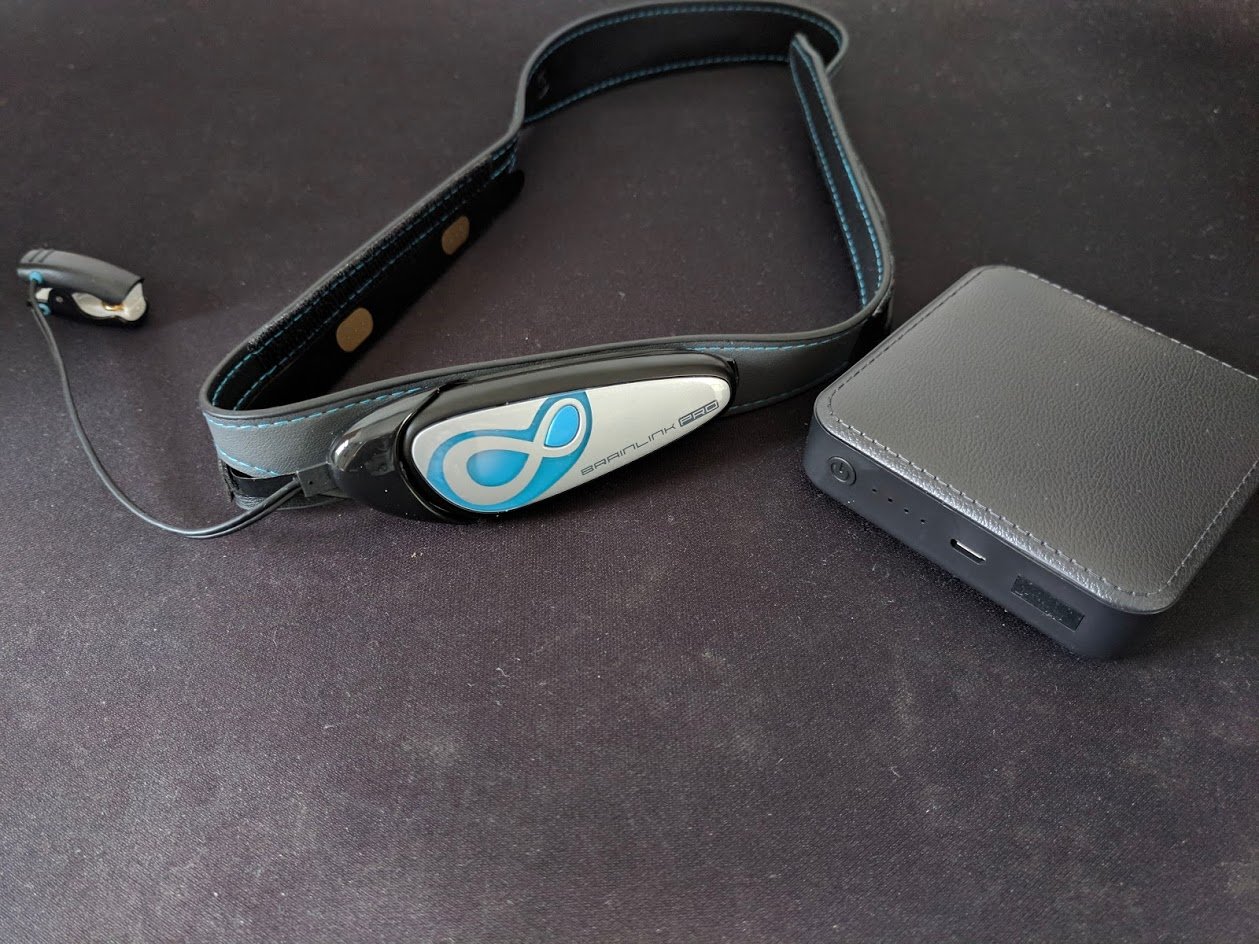 The BrainLink Pro and the control box

The video I shot below shows how the Space Warrior responds to brainwave controls in real life (I could not get it to fire the sponge bullets even if I tried):

Even if I saw the instructional how-to video from Macrotellect before trying it myself, my first expression after controlling the Space Warrior with my brainwaves was an honest “wow”. It was an impressive experience unlike any I had with a tech. I really could control a robot remotely just by relaxing/focusing.

What is it good for, you ask? On the official product page, it’s mentioned that it’s geared towards edutainment purposes. I can definitely see how it can entice children and adults alike to better understand what’s the science behind controlling a robot with one’s brainwaves. It’s also a gateway to meditation/mindfulness by offering a much more interactive way to do so. I am myself not too excited about the prospect of sitting still and meditating but having a tangible, interactive meditation experience is much more appealing; so much so that I picked up the practice myself after receiving the Space Warrior/BrainLink. Seeing the robot back up when I relax and wind down continues to be a delight. 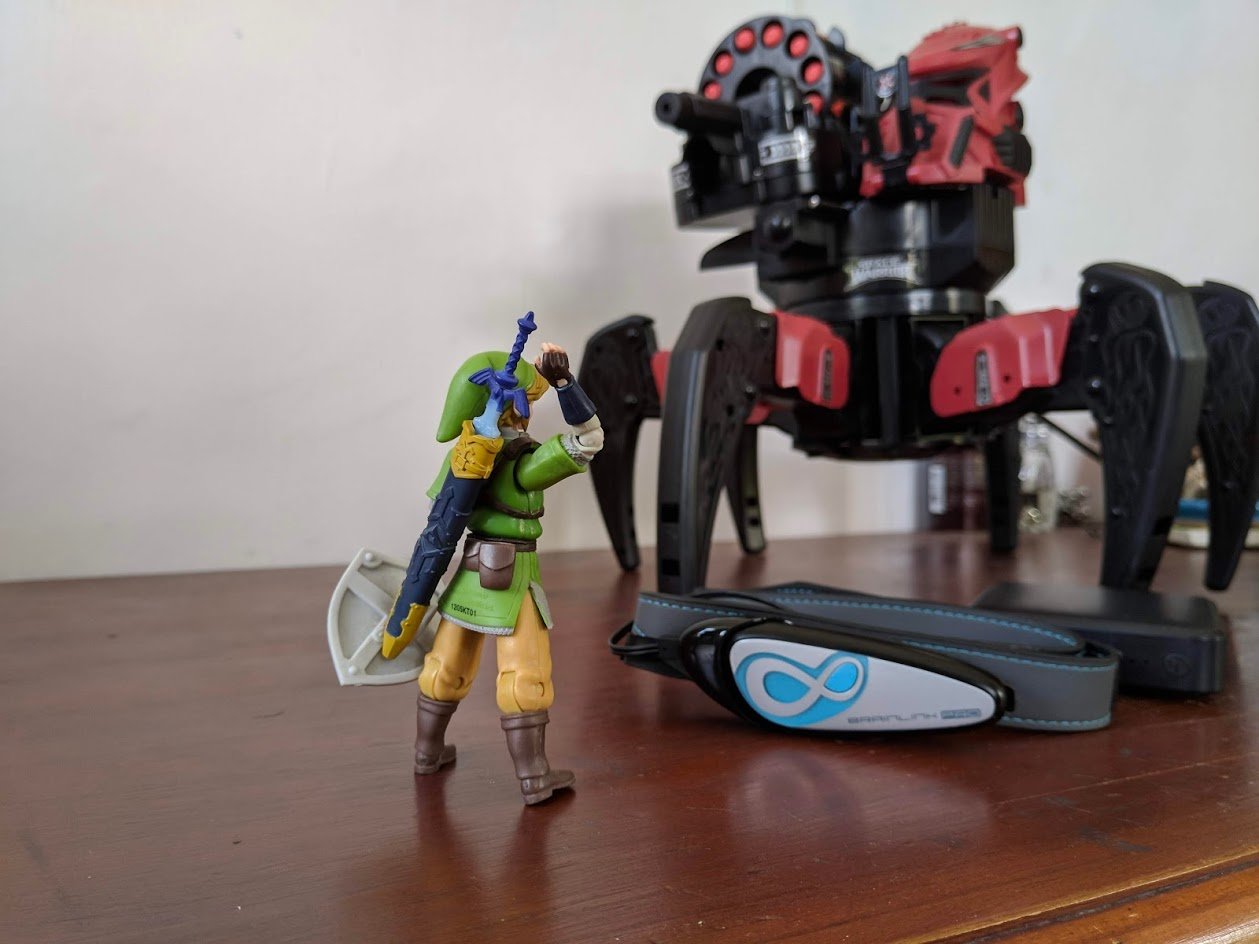 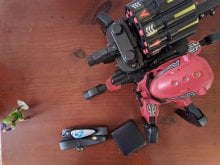 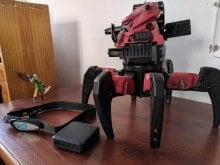 In fact, the BrainLink products are marketed as meditation devices. Macrotellect was kind enough to provide two of these, the BrainLink Pro and the BrainLink Lite. The Pro is the only model compatible with the Space Warrior and it also has better algorithms to interpret your brainwaves. The BrainLink Lite does not feature accelerometer and emits a rather loud beep that notifies you when the device is on/off or connected properly. The Pro on the other hand has a gentle vibration for these alerts. Note that the Pro's module needs to be connected to a separate headband to work with the Space Warrior (included with it) while its meditation headband is a different one, which features LED lights at the front corresponding to one's mental state. However, the Pro model is mostly targeted for research purposes and many apps aren’t compatible. 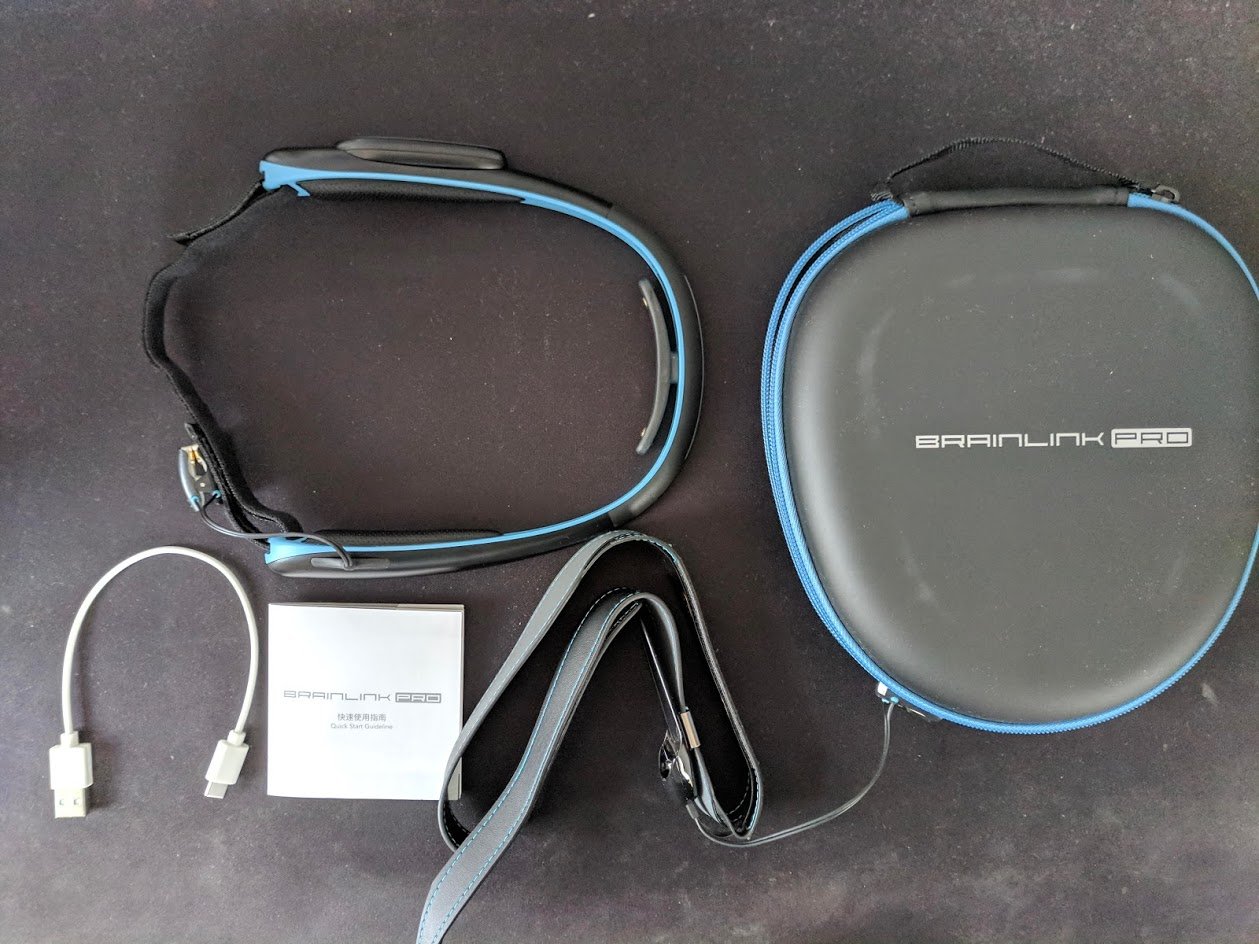 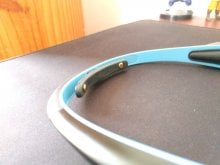 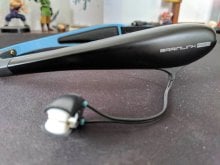 The BrainLink Pro's contents and the EEG electrodes within its headband

For general meditation purposes, the BrainLink Lite is the model to opt. It has better compatibility with games and meditation apps developed by Macrotellect and other third parties. However, when it comes to Android, app support is very poor. The official Macrotellect Google Play store has a grand total of four apps, only two of which are in English. Those two include the BrainLink app which is a demo of sorts that lets you levitate on-screen objects by relaxing and the other app is the Basic Detection which gives you your EEG readings that is picked up by the BrainLink headband. There are other third party apps like NeuroFun and Little Buddha which claim compatibility with the headband but I could not get them to pair with the headband. 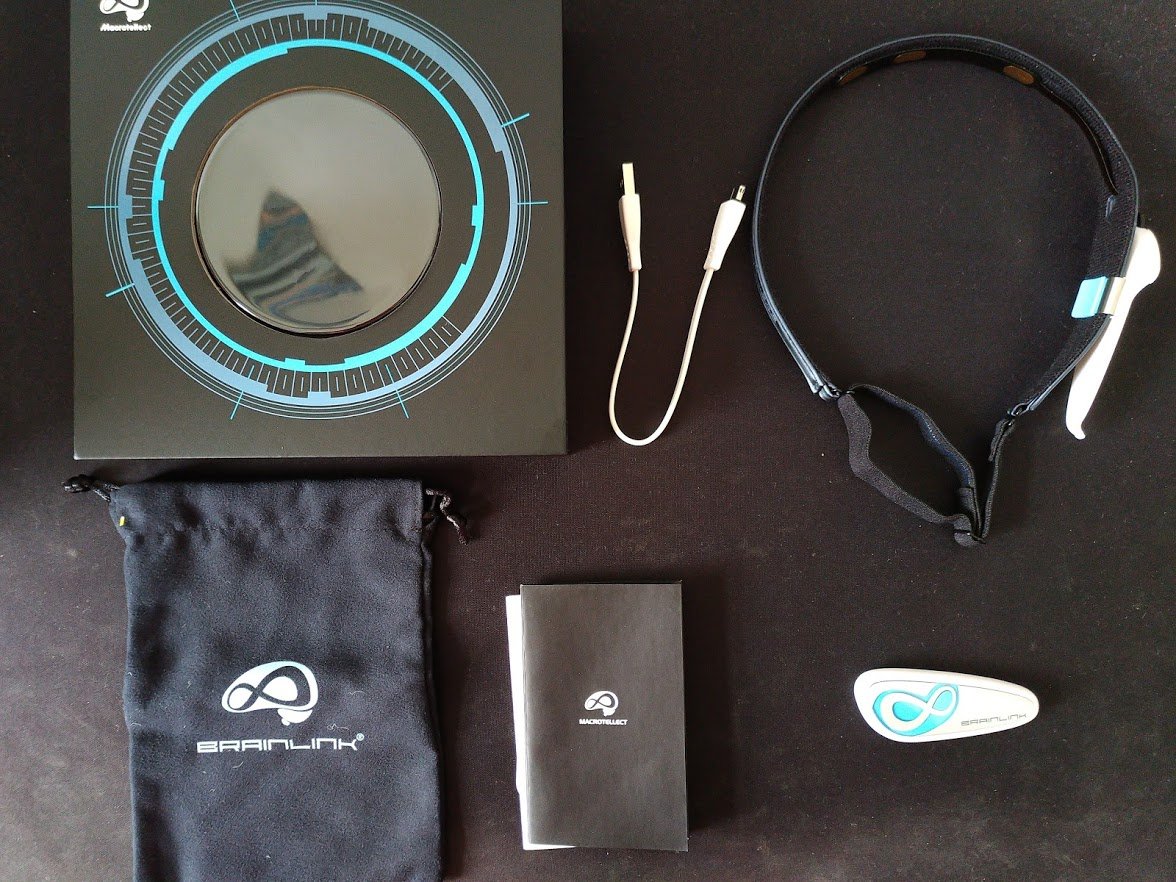 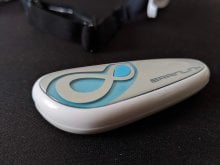 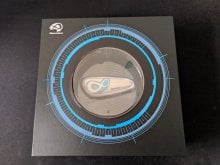 The BrainLink Lite contents and module

For iOS, it’s a whole other matter altogether. Macrotellect has several free apps and games that are regularly updated. However, I was able to obtain the APK versions of these apps from Macrotellect to sideload on my Android phone, some of which worked while others did not. My favourite is Zen Garden that takes a Tamagotchi-like approach to meditation. By completing the built-in meditation guides, you Zenergy points which are used to water your pet plant and help it grow. Once your plant matures, you collect Mind Crystals that can be used to purchase other plants. If you don’t meditate often, your plant will wither and die, and so it encourages you to log back in to keep your pet plant healthy and your meditation game up-to-date. The app also allows you to track and analyse your meditation sessions.

But most of the time the Zen Garden app could not detect the BrainLink and it was the same with other apps I sideloaded like MindFruit (a bit similar to Fruit Ninja) and MindSports. Granted, these are not officially available on the Play Store hence technical issues are expected but the very same apps are available on the Apple’s App Store and look rather well-suited and functional for the BrainLink, though I don’t possess an iOS device myself to test them. This sore lack of Android support was a real bummer. Even third-party support is poor, with the “compatible” apps I tried not paring with the device, probably due to lack of updates from these apps’ developers. The best use on Android I found is to use the Basic Detection app to receive biofeedback (see my EEG readings) and interpret what type of meditation works best for me.

It’s a shame because these devices don’t come cheap. At the time of writing the BrainLink Pro is priced at €250 and the BrainLink Lite is at €160 on an official reseller’s online store (Amazon’s listing says “currently unavailable”). And if you want the cooler, mind-control items, you’ll have to invest some more. The Space Warrior is at a whopping $300, the smaller Spider costs $30 and the Book Lamp goes for $80. I tried the Space Warrior and it definitely enhanced the experience with the BrainLink Pro, even letting me overlook the lack of Android apps. But it does come at a hefty price and likely not enticing enough for laypeople. Nevertheless, I can see it getting adopted in schools or even research groups given its edutainment focus and its potential to implement it in projects/app development.

While the BrainLink Pro and BrainLink Lite are well positioned to help tech-enthusiasts get into meditation and the tech behind those devices works, the price point and pricey add-ons don’t offer compelling reasons enough to adopt them, even if they can offer really impressive and unique experiences. 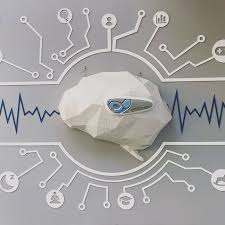