For reference I played Blood & Truth on a PlayStation 4 Pro using the dual Move controllers. While it can be played with a DualShock 4 we would strongly advise against that. Review code provided by PlayStation.
Blood & Truth sets out to take you on a ride through a Hollywood style, action filled, bullet-blasting, slow-mo littered, adrenaline pumping experience through a realistic looking virtual reality London. This is a game that will have you shouting WOW for both the best and worst reasons.

A common complaint with VR is the lack of any must-have, exclusive games that are unique to the platform and offer up an experience that cannot be replicated on traditional gaming platforms. So, for the launch of the PlayStation VR, Sony’s London Studio created PlayStation VR Worlds - a collection of short experiences that were meant to be an introduction of-sorts to VR gaming, showcasing what can be achieved and experienced.

One of the titles included in VR Worlds was called the "London Heist" - a short, half-hour experience set in London’s east-end with a strong cockney geez-ah flavour. While brief, it was the favourite of many during PSVR’s early days and left those who played it desperately wanting a sequel in the form of a proper fully fledged game.

Well, Sony’s first-party London Studio are back with Blood & Truth - an evolution of the London Heist formula, offering a more complete package and a character driven story. While not a sequel to the London Heist, it’s as close as you can get - you certainly won’t need to have played the former before you jump in.

During the course of the story you’ll take a ride through levels that take inspiration from real life London locations. From alleys to tower blocks, art galleries and more. You will use whatever’s in your arsenal to take down waves of enemies in between slower story moments and scripted action scenes.

Wind your neck in!

Story-wise, Blood & Truth is good but not great. You play as an ex-soldier who has returned to London but is pulled back into the action in order to protect his family. It’s standard stuff, and though the story is told well enough, these moments can feel extended, often overly-long and usually without anything to interact with to keep your virtual hands busy. These slower pace breaking sequences sit you between characters that often feel like you have front-row tickets to a stage show with somewhat campy, melodramatic acting. It's all serviceable stuff though and it will keep you entertained, especially considering the immersive presence of the characters that feel like they're in the room with you. On repeat playthroughs however I'll definitely be reaching for the skip button, except there isn’t one - more on that later.

Immersion is one of the biggest deal breakers in VR, and for as strong as the presentation in Blood & Truth is, the dated hardware of the PSVR platform often holds it back. The graphics in the game are stellar, with fantastic attention to detail and a decent variety of locations. Character models are a high point with animation and expressions the best we’ve seen on the platform. However, the limited power and resolution of PSVR can make distant enemies and vistas into a more blurry, pixelated mess.

What did surprise me was that unlike the London Heist demo, your character; Ryan Marks, who you spend the entirety of the game playing as, has actual scripted dialogue and converses with other characters during gameplay and cutscenes. I personally felt this took away some of the immersion as I felt a disassociation between my virtual avatar and the voice I was hearing.

Player movement has been a big problem in VR gaming for as long as the platform has existed; sure, when in VR you can pace a couple steps around in the real-world which translates to moving in the 3D world, you can also crouch or lean to take cover, but simply moving from A to B, beyond the confines of your VR play area, has been a constant hurdle for developers. Some developers opt for an on-rails experience; others a teleportation style system; while some simply allow free movement, though the latter is made more difficult on PSVR thanks to the lack of a traditional analogue stick on the Move controllers. Blood & Truth however uses a node-based system that allows you to simply look at pre-designated spots (often placed behind cover) to transition toward automatically with the tap of a button. The problem with Blood & Truth’s implementation of this system is the way your character transitions between points. You simply glide from one point to the next, always facing dead ahead (your characters body never changes the position it’s facing - though you’re free to look around using your head of course), this really hurts the immersion as often you’ll be sliding at odd-feeling angles, like something akin to a human crab as you slowly and awkwardly slide sideways from cover to cover.

The node system does have its advantages however as every spot you’re allowed to move to is perfectly designed to accommodate you in that moment, allowing for perfect cover from incoming fire and better placement of enemies in relation to your position. With this node system, unlike other movement systems in VR; you’re very unlikely to ever become stuck or awkwardly facing a wall. It also helps to keep the linear experience moving forward without ever becoming unsure where to go next. Branching paths are also an option and that should help with replay value though they ultimately lead to the same end.

The majority of your time in the game will be spent shooting, but due to how great it can feel, when it works; shooting wave after wave of enemies isn’t as tedious as it should be. During the campaign you are given a bevy of weapons to choose from and customise. You are equipped to carry two pistols on your belt and two larger weapons on your back (as you progress) and if you get bored of them each level is littered with weapons along your way to switch it up. There’s even the occasional grenade or two!

Problems begin to arise when attempting to reload and control 2-handed weapons, again this is mainly due to the PSVR hardware which is dependent on the PS4 camera tracking the lights accurately and when you’re performing actions such as the above or aiming down sights, you can often obstruct lights on the controllers or headset which causes the controllers to wobble or even drift away briefly. This isn’t always a problem and you can get used to it but during hectic moments it can irritate. Reloading weapons is done by picking up ammo which is stored on your chest strap, you can pick it directly from your chest regardless of whether you are holding a gun or not and place it in your guns chamber. While gimmicky, it feels neat when it works and you can have some fun with it especially when you're required to flick back the shotgun to close the chamber. 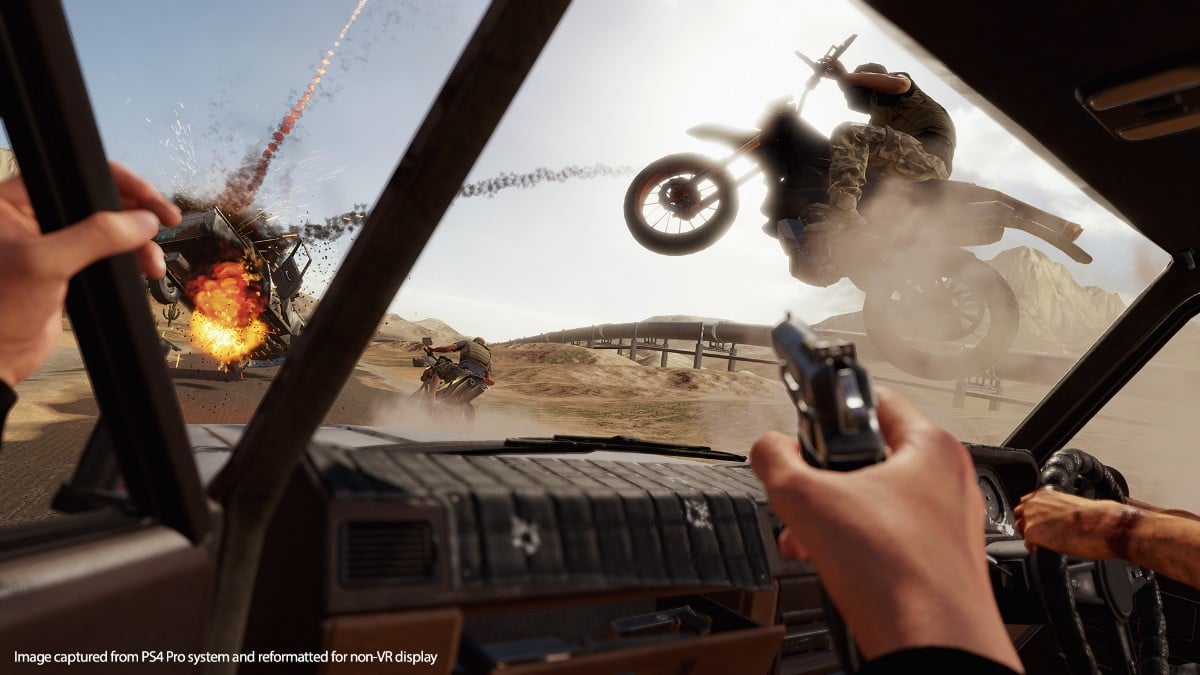 One minute you’ll be feeling like John Woo as you take cover, peek around corners, pop off shots at approaching enemies, spin your gun on your finger (with accurate momentum-driven weighty mechanics that feels so good every time) to throwing ammo clips in the air and catching them in the chamber of your gun to reload.

But when the next moment you’re struggling to perform a simple task such as reloading or switching weapons in the middle of a firefight, which then leads to your death you’ll be close to tearing off your headset in frustration.  It’s just frustrating when controlling your character in the game can be as incredible one moment as it is frustrating the next.

The biggest problem I had with guns is the inability to pick up another gun in the level without first holstering the gun in your occupied hand. There is no button to just drop (or even throw) a weapon. It makes it feel like the gun is glued to your palm. You have to carefully holster a gun even if you just want to get rid of it so you can replace it with another weapon in front of you. This can be a real problem during busy firefights especially when you're out of ammo. Another, superb game - Superhot VR has handled these mechanics much better by letting your drop the weapon your holding or even throw them at enemies to damage them - you can’t do that in Blood & Truth, nor can you just make a fist and punch or knock down close-by enemies - they have to be shot, otherwise your hands just go straight through them, though this isn't a regular occurrence as most enemies are placed at shooting distance.

Between the gunfights you’re given other tasks to break up the waves of enemies such as lockpicking, interacting with objects and even scaling walls and swinging across monkey bars. These moments feel great, especially the climbing which is really well done and heightens the immersiveness. One "wow" moment I experienced was while climbing I spotted an enemy on patrol - I paused for a moment wondering how I could pass, then it suddenly clicked - while maintaining my grip on the wall I reached for my silenced pistol and pulled myself up ever so slightly to line up a headshot and cleanly took them out before I carried on climbing. It’s these little moments in Blood & Truth, between the moments when the gunfights just work that make you smile and appreciate how different VR is to regular gaming, no matter how daft you look to the outside world!

There are some scripted (yet interactive) action sequences in the game that move you along automatically either on foot or in a moving vehicle that allow the game to really show off and throw some big wow-factor Hollywood style moments at you and these are some of the best moments in the game. Unfortunately there are only a handful of these moments which is a shame as I expected it to have more. 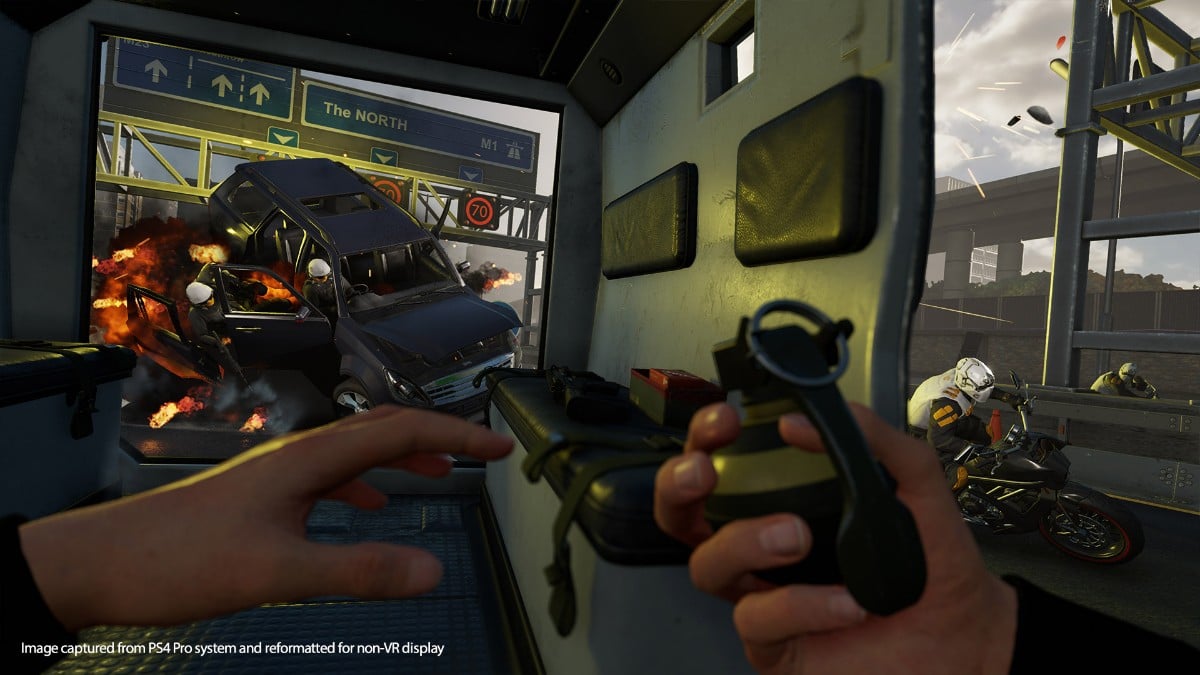 Due to the linear nature of the game and the fact that it keeps throwing new scenery and weapons at you, I found it difficult to stop playing - only stopping to combat eye fatigue and headset tightness. I played the game across 5 different sessions and it took approximately 6 hours for the credits to roll. After that I was desperate to try some of the best action sequences again but strangely enough I couldn’t find a way to just play these without also having to sit through the scripted cutscenes and story elements which you cannot skip. There are shooting galleries, time attacks and collectables to find but honestly these did not entice me as much as the idea of playing through some of the cooler moments from the campaign again. Hopefully an option to play these sequences alone can be patched in at a later date but I won’t hold my breath.