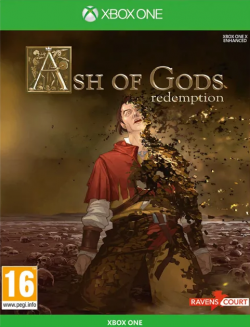 I'm not a stranger to RPGs, strategies and roguelikes, so when this holy trifecta aligns, my interest is piqued. After hearing the promise of a tactical role-playing experience where every choice counts, I was ready to sink my teeth into Ash of Gods. Did it burn up in a flash, or did it redeem itself? Read on to find out!
Ash of Gods: Redemption is a tactical roguelike RPG available on PC, Xbox One, PS4 and Switch.

Many people like to think that life is a constant cycle of catastrophy and revival - the world of Ash of Gods: Redemption follows this rule literally. Once again, a Reaping is upon Terminum. Pestilence spreads across the land and its warriors, The Reapers, are out for blood. Take charge of three bands of heroes engulfed in the conflict, some through choice and some through circumstance. Can you survive the end of the world? Maybe, if you're patient enough. Ash of Gods: Redemption is a grid-based roguelike tactical RPG, something that is immediately appealing to me just based on the text found on the tin. Just the description alone evokes comparisons to The Banner Saga, the gold standard in the genre, and those comparisons are not baseless - everything from the gameplay to the audio-visual presentation is clearly inspired by it. How does AoG:R stack up? Well...

The story starts off pretty well - it introduces the player to the idea of a recurring apocalyptic event called "The Reaping," a cataclysmic blight that gradually saps the life and sanity from anyone it touches, preceded by the appearance of mysterious warriors called The Reapers. In the first three chapters we meet our protagonists - Captain Thorn Brenin, an honest but stern former soldier; Lo Pheng, a member of the Clan of Shadows and sword for hire; and Hopper Rouley, a wandering healer more ancient and mysterious than you'd expect upon first glance. Each of these characters have their own storyline and as the story progresses, their parties gradually grow or shrink, depending on your choices. This is the one aspect of the game that's hard to pick apart - the developer did a great job implementing roguelike elements into the dialogue and gameplay. You're free to run your parties the way you want. Often times you're forced to make sacrifices and difficult choices on your quest to stop, or at least delay, the impending Reaping. Anything from dialogue presented in the form of a multiple choice visual novel to simply choosing a path on the map may, and probably will, affect the final outcome for the party, so roguelike fans will certainly appreciate what AoG:R has to offer. Sadly, the game falls apart in almost every other department.

The visuals are certainly appealing judging by the screenshots - hand-drawn backgrounds, classically-animated characters, gorgeous environments inspired by medieval Europe, what's not to like? It's great... until you look a little closer. The animation in the cutscenes is choppy - it has that "discount Disney" feel about it that you can't shake. If you squint and focus on enjoying the story, you just keep thinking that you'd probably enjoy it a bit more if the font wasn't microscopic. I had to get off my seat and take a few steps towards the screen to actually read the text in some segments. When comparing gameplay recordings of the PC version to the Xbox version which I received, the font on console was smaller, when it should've been larger to accommodate a couch gaming experience. This issue was somewhat diminished with subsequent patches, but is still a problem at times, especially in the UI. You might think I'm nitpicking here, but there are few things that distract you from a good story more than being physically unable to read it, and my eyesight is perfectly fine. On the bright side, the audio is excellent - sound is meaty and the music is composed by Adam Skorupa and Krzysztof Wierzynkiewicz, both of whom have long resumes, including soundtracks for The Witcher 2 and Ancestors: Legacy. Their work lends the game the foreboding feeling of true struggle for survival, so you keep squinting, push through the shortcomings and dive into the gameplay...

Thou Return Unto The Ground

You'll spend most of your time in combat, and if you're familiar with The Banner Saga, you pretty much know what to expect - you place your characters on a square grid and take turns against the enemy until you lose, or by some stroke of luck cheese it and win. I'm not being facetious - the battles are extremely punishing and the AI almost never makes tactical mistakes, so you really have to sit down and think your moves through, as well as get used to taking losses on the battlefield. The game quickly makes you accustomed to death, but don't worry too much - on the default difficulty level your characters will not perish immediately, they will instead become injured and will only die permanently when they're injured repeatedly. Thank God, because focusing on the combat is an incredibly frustrating task. All the makings of a good battle system are there, with an extra twist of card-based combat in the mix to give you a powerful but scarce method of turning the tides to your advantage, but the game suffered greatly in the porting process and ultimately is a chore to play. Try as I may, after sinking hours upon hours into the game I was still making mistakes not because I didn't plan things out accordingly, but because the UI and the controls are absolutely incomprehensible. Sometimes things are selected with the D-Pad, sometimes with the analog stick, then some other times you have to use the bumpers, all to simply navigate menus - it's a mess, and it truly spoils the broth that had so much promise in the beginning.

It's not all bad, there are some genuinely good ideas in here that made me think "wow, I wish all games did that," like the division of a character's physical condition into "Energy" which serves as fuel for skills, but also doubles as their stamina bar, and their actual "Health." When attacking, you can either choose to drain the enemy's Health directly or focus on their Energy instead. Depleting the Energy bar completely will enable you to do double damage to Health, so often times it's a worthwhile gamble. The mechanic allows you to set up neat engagements, like having your archers drain the enemy's Energy with their special long-range attacks before your close-range heavy-hitters pummel your foes into dust with double-damage strikes. It's risky, as most powerful moves drain your Health pool, but when it works, it's great. If only the game didn't feel like I was playing it while wearing oven mitts, it wouldn't be an exercise in frustration. And the cards? They needlessly overcomplicate something that should be simple and straight-forward - I hardly ever used them. I only pulled out the deck when the situation was truly dire, and they rarely helped, so I never purchased any more from the merchants I came across while traversing the map, focusing instead on life-saving artifacts. In the end it felt like the game was trying to be multiple things at once - a rougelike, a tactical RPG and a card game, without really excelling in any of these genres. The cherry on the sloped cake? The camera feels like it's stuck in molasses. It's rough.

For Out Of It Wast Thou Taken

The remainder of the game takes place on the map where you choose paths leading to your objective and run into various roguelike events. Depending on the party you're playing as, travelling will either spend Strixes, magical stones which protect you from the negative effects of the Reaping, or increase your Curse level which reflects the difficulty of the game. There's no room for grinding here - your resources are very limited and every single step, every decision along the way, truly matters. Sometimes you will run into situations where showing kindness to your fellow man will cost you time, and wasting time means wasting Strixes or becoming more and more Cursed, so... you have to be a bastard, and you have to embrace it. If you don't, the game will immediately punish you for following your heart instead of reason. The only advice I can give is... save often.

For Dust Thou Art, And Unto Dust Shalt Thou Return

Ash of Gods: Redemption starts off promising, but the chips in the armor are hard to ignore

Ash of Gods: Redemption is a mixed bag, with a few too many flaws to truly recommend. I usually end my reviews on a positive note, but this time around I simply can't based on the product I received - it's average. It took me forever to play this game, one chewy chunk at a time, and the only conclusion I came up with is that while I'm eager to enjoy an epic fantasy, this is a video game first and foremost, and it falls flat in its execution. It pains me to score it the way I'm going to and I do it with a heavy heart because I can see what the developer was going for - a punishing roguelike adventure with a gorgeous animated exterior, beautiful soundtrack and an interesting story to boot. Unfortunately, after losing my characters to unpredictable and overpowered AI time and time again, fumbling with the controls and failing to get from point A to B without having the party injured and at the brink of death, the only thing that was tested was my patience.