to twitter, only mutter app. Kana conversion for a little upgrade.
Since twitter has quit BASIC authentication, this software is no longer in post.
The surplus in the house I wonder if I make the DS a bot, I implemented a feature in DS murmur.
V0.1 only because it was thought that the mutter, the Japanese could not enter. So now that boring, I implemented a front-end processor. However, I am a man entered kana-kanji conversion is an all or strike. Roman is going to make the input I have never used myself. Since the Kanji conversion feature on published sources as well, someone please make a version of Roman type.
Tewitter program for posting to the blog, "I enjoy your computer!" Is written. In addition, other sources are included on the source of all front-end processor.
Kanji conversion engine, the Yafudeberoppanettowaku "Kanji conversion Web API" is used. When you use kanji conversion applications, please obtain a Yahoo ID. Kanji conversion is not that there is no ID. 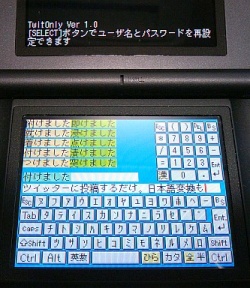 @ captainbob321: It's Just That I Have Been Having a Hard Time Ever Since That I Saw Awful Hate Images of Ami... 5 minutes ago
Chat 3