Go to download
Overview History
hey guys, I would like to present to you my first try on creating games with palib and it's also my first try to create a game using a programming language (well.. i'm the typical noob who doesn't want to read much about any explainations, i love the super mario vision "learn by dying")

just to notice, i already created this game using rpgmaker2000, if you want to give it a shot. game is entirely in english, presentation is german :x

the DS version is lacking of some features, well i got bored on it and wasted too much time so the code is already in a messy form i'm not able to extend - but anyway, it's working!

the things which were hated on my rpgmaker2000-version (no background and no backgroundmusic!!!) are implemented in the DS-version, in cost of the bonus features and animations

i'd love some feedback it would encourage me to start a high motivated 2D-rpg for DS
(one thing, the rpgmaker2000-version took me about a week, the DS version was done in a few days)

by the way - all pictures (except the console-font) are by me (not by aeco how it's on the picture >.< he didn't make anything for me T.T this line is already removed in the game), sound is (i fear i don't know who's the composer :x) a rework using mind of donkey kongs' coral, not by me

you will find an entirely how-to on the rpgmaker2000-version, so here's the short version:

it's an electical form of the public game "Take it Easy" - so idea is either not by me - you have to create straight lines without any interruption - if the line is straight, so you will get points according to the value of the line multiplyed with the amount of token of the line
example: 4 tokens straight 6 = 4 * 6 = 24 points

just a small info - possible highscore: 307 (but only if you're that lucky for getting the correct pieces) 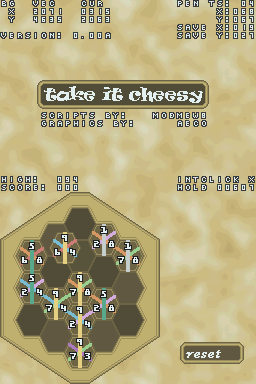