Go to download
Overview History
R4M3ConcepT_Tds is a replacement firmware for R4DS and M3DSSimply.

Initially named by eBooT_Tds the R4M3ConcepT_Tds born of a need to make the YSMenu more functional and pleasant. It was during the preparation of skins that the idea occurred to me that this was the real CONCEPT R4. As I went along, the idea never left my head. So I decided to change the name to R4M3ConcepT_Tds.
_ R4M3 as it is for the R4DS and M3DSSimply, Concept because it is the true concept R4 and the symbol T_T is in honor of Yasu, creator of YSMenu, because without him it would not be possible. I do not know if it works in other ClonesR4 but I believe that everyone has them sooner or later will test...

Only need to download the YSMenu. Put YSMenu0903270000.zip in the "Downloads" folder. Run EXE "R4M3_Installer_EN5" following options. Extracts R4M3ConcepT_Tds.zip and and copies everything that is inside the folder R4M3ConcepT_Tds to the route microSD.

MicroSD card:
Backup your files.
Format your microSD card.
Copy the contents of the "R4M3ConcepT_Tds" folder, to the route of microSD card...
Put files in "_NDS_" folder.
...enjoy.

Note: (do not modify anything inside the "R4M3ConcepT_Tds" folder) 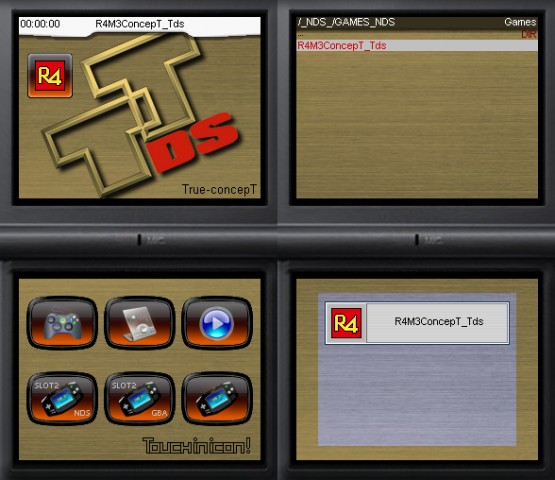