Go to download
Overview History
Pnakys is a "puzzle game", which gameplay is inspired by an old arcade game called Pnickies, which gameplay is itself a mix between Tetris and Bust-a-Move Basically you have to make groups of balls of the same color, then explode them by having two "special" balls (balls that contain a star) within a group. Exploding large groups will give you big score increases. Well, I know that explanation isn't very good, so let's focus on the game itself You have two game modes : the "Normal mode" and the "Vertical Mode".In the "Normal Mode", you can move the falling item with left and right keys, make it go down faster with the down key, and rotate it with A and B keys. You can pause the game using Start or Select keys.In the "Vertical Mode", then you have to rotate your GBA 90 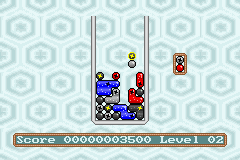